The Crew Dragon made a splashdown landing in the Gulf of Mexico just after 2:45 pm ET.

Why it's important: This was the final stretch of a historic mission — and in some respects it was the most dangerous leg of the journey.

Two small boats swooped in immediately after splashdown. One is checking to make sure there are no toxic fumes around the Crew Dragon capsule. The other is working to drag the spacecraft's parachutes out of the ocean. 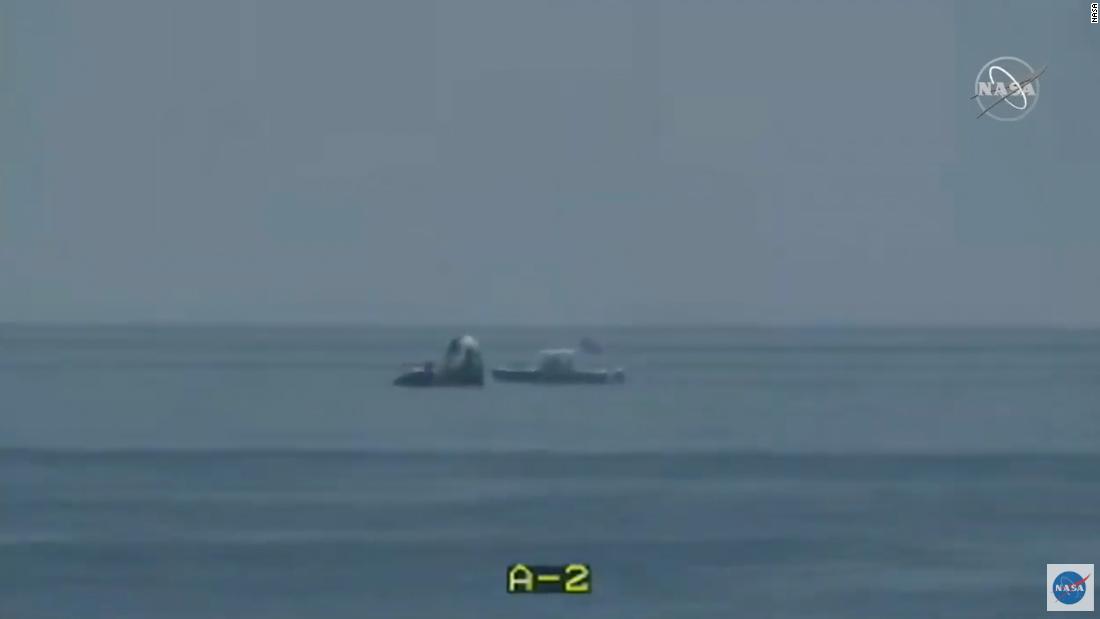 Waiting in the wings is GO Navigator, a much larger vessel with a rig that can haul the Crew Dragon spacecraft itself out of the ocean.

Hurley and Behnken will disembark after their vehicle is safely on board. That's expected to happen in less than an hour. 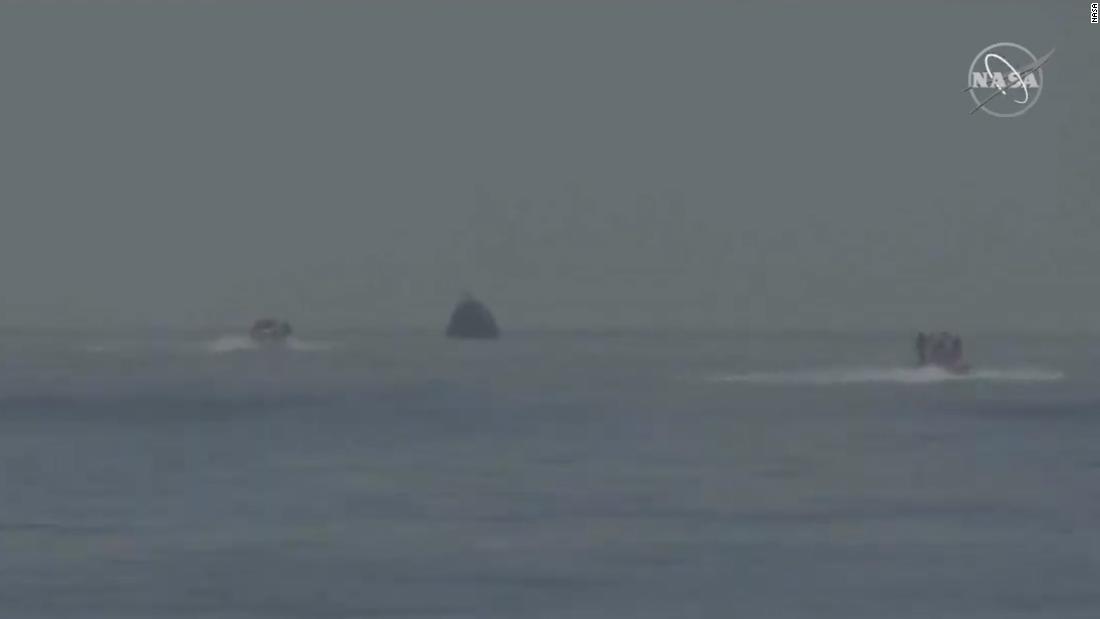 The first words from mission control to the astronauts were a humorous welcome home: "Thank you for flying SpaceX."

The astronauts had a cheerful message for their flight doctors waiting to check them out as well: 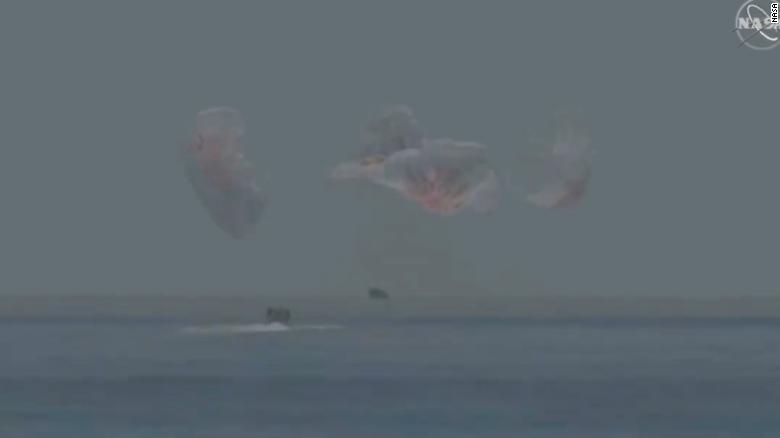 The Crew Dragon capsule has splashed down into the Gulf of Mexico, finishing off the hardest part of today's journey.

And SpaceX personnel cheered loudly from inside mission control at SpaceX's Hawthorne, California headquarters. The GO Navigator rescue ship will move in to haul the Crew Dragon spacecraft out of the water and allow Behnken and Hurley to disembark. 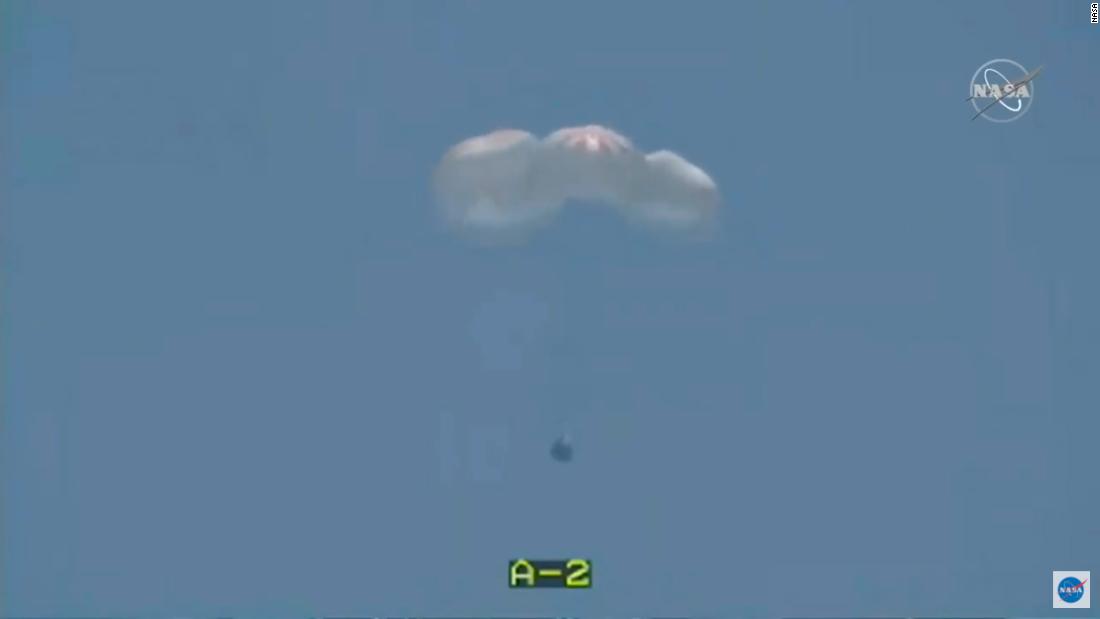 The first set of parachutes, called "drogue parachutes," just stretched up above the Crew Dragon spacecraft. In about a minute, a second plume of four main parachutes — which are much larger — will fan out to continue slowing Hurley and Behnken's descent.

They were followed quickly by the Crew Dragon's four main parachutes. Behnken and Hurley are rapidly approaching their splashdown site. The parachutes will aim to slow the spacecraft down to 15 or 16 miles per hour before hitting the ocean.

As expected, mission control has lost communications contact with the Crew Dragon capsule. This is common for spacecraft going through the extreme conditions of reentry, when the dramatic heat and buildup of plasma briefly interfere with radio waves used for communication.

The blackout is expected to last six minutes.

Despite a tropical storm hammering Florida's east coast, the Crew Dragon vehicle's splashdown target off the panhandle has calm waters and low winds.

The astronauts' capsule is beginning its final descent.

NASA spokesperson Dan Huot said it's about 174 miles high and traveling less than 17,000 miles per hour. The Crew Dragon began its journey at the International Space Station, which orbits at about 250 miles above the Earth. 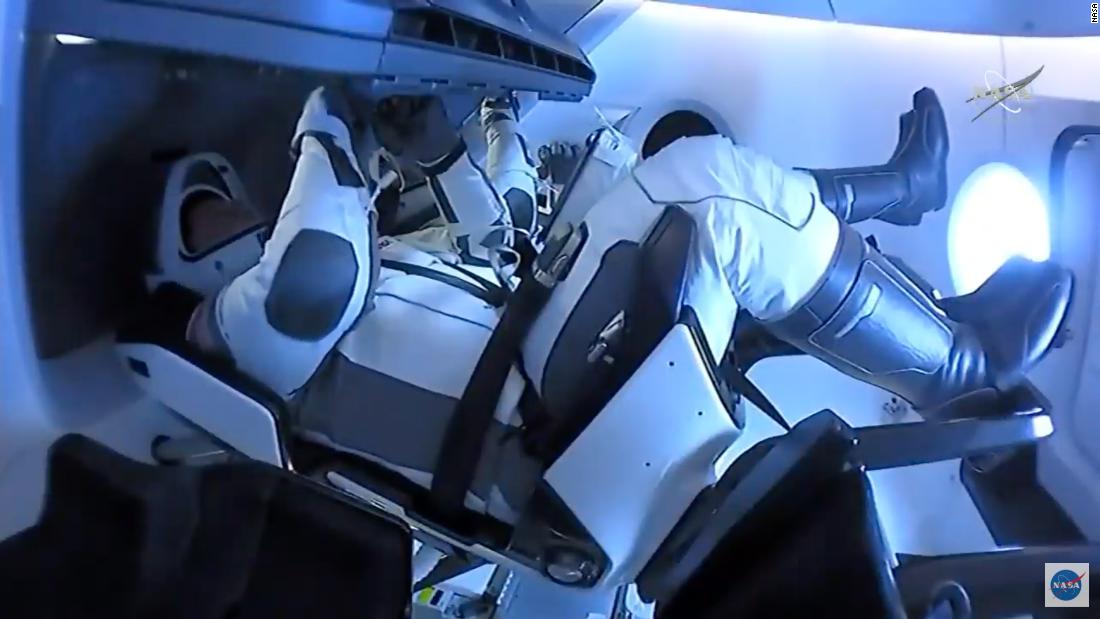 Crew Dragon had to take a long, looping journey back down because it's traveling at such high speeds. But now that the capsule is getting back into the atmosphere, it's expected to quickly decelerate.

SpaceX CEO Elon Musk is front and center at SpaceX's mission control in Hawthorne, California. Sitting to his left is Gwynne Shotwell, the company's president, chief operating officer and one of the company's first employees. 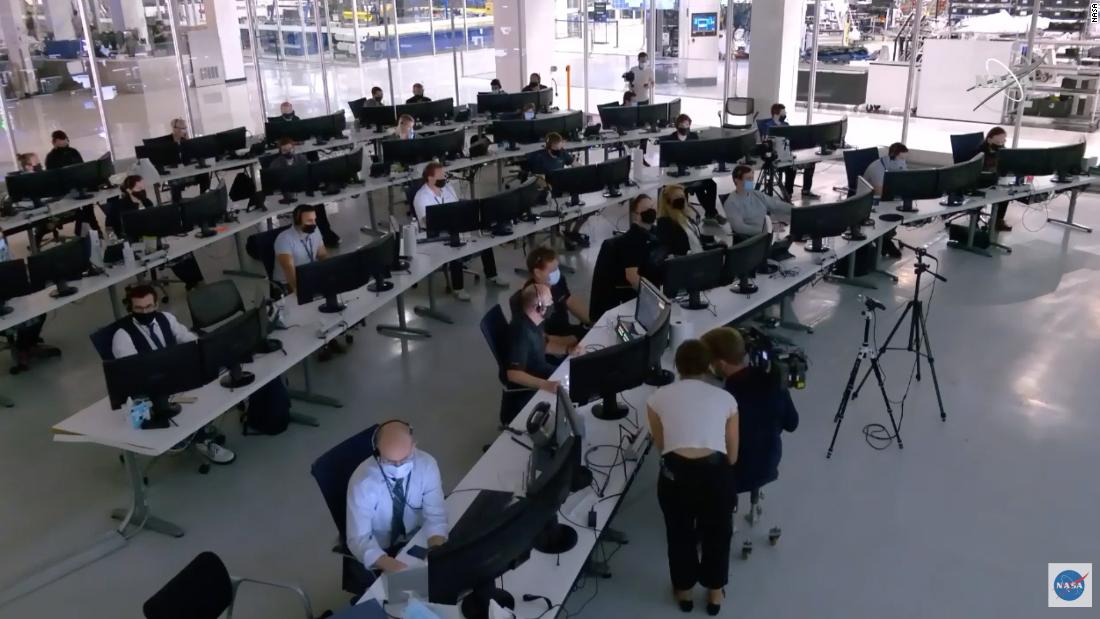 The nose cone on the top of the Crew Dragon spacecraft is now sealed shut. The small, white cap is designed to protect the hardware that allows the vehicle to dock with the International Space Station, and it can swing open and shut on its hinge.

SpaceX wants to keep it shut for splashdown to keep all the docking components sealed off, as the company plans to reuse this Crew Dragon spacecraft on future missions.

And the more components stay dry, the better.