Our coverage has ended. For more on Virgin Galactic's VSS flight click here.

Virgin Galactic's VSS Unity spaceplane has detached from its mothership and is independently headed toward space, a livestream from the event showed.

VSS Unity is a suborbital space plane, meaning it won't drum up enough speed to escape the pull of Earth's gravity. Instead, it'll rocket at more than three times the speed of sound — about 2,300 miles per hour — to more than 50 miles above ground.

At the top of the flight path, Branson and his fellow passengers are expected to briefly experience weightlessness.

Here's a look at what the crew aboard Virgin Galactic's VSS Unity saw while traveling above Earth:

From the time the ship leaves the ground to the time the spacecraft lands back down on it, Richard Branson's trip aboard Virgin Galactic's VSS Unity should only take roughly an hour.

Unlike traditional space travel where astronauts circle the Earth and float in space for days, Virgin Galactic's flights are brief, up-and-down trips. But the spacecraft will go more than 50 miles above Earth, which the US government considers to mark the boundary of outer space. 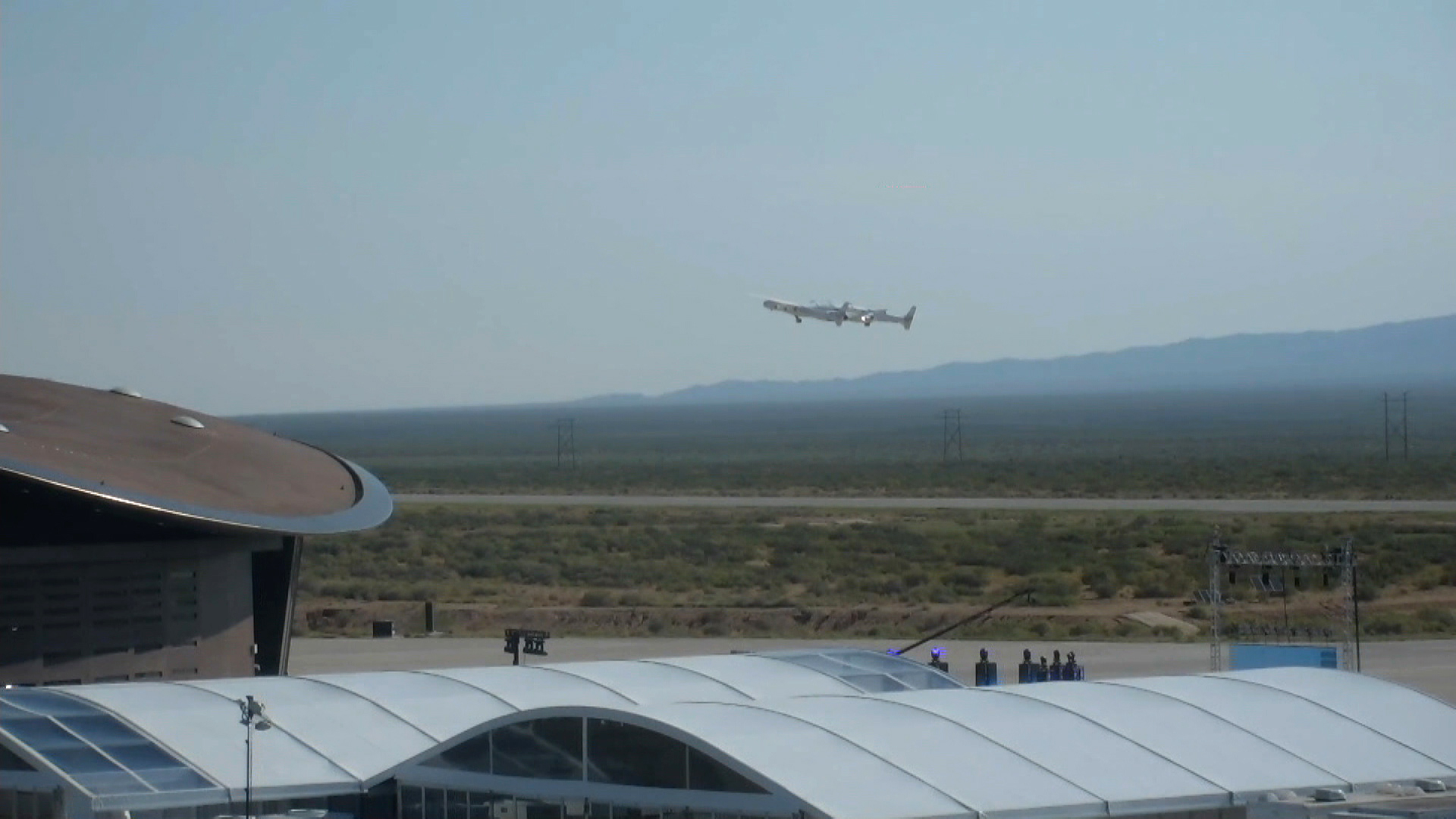 The Virgin Galactic's VSS Unity has officially taken off.

The flight, which has billionaire Richard Branson and other passengers aboard, conducted more than 20 test flights, three of which have reached the edge of space, CNN has reported.

It is affixed to a mothership, called WhiteKnightTwo, that looks like two sleek jets attached at the tip of their wings.

The mothership will take about 45 minutes to cruise along and slowly climb with VSS Unity to between 40,000 and 50,000 feet.

When the pilots give the go-ahead, the space plane will drop from between WhiteKnightTwo's two fuselages and fire up its rocket engine, swooping directly upward and roaring past the speed of sound.

The Federal Aviation Administration on Sunday issued a TFR or temporary flight restriction around the area of Truth and Consequences, New Mexico, in anticipation of Virgin Galactic’s trip to space.

The TFR was issued from 9 a.m. through 6 p.m. ET “to provide a safe environment for spacecraft recovery,” according to the FAA.

Some context: Temporary Flight Restrictions are used by the FAA to restrict aircraft operations within designated areas.  According to the FAA, TFRs with regards to spaceflight are typically used in Florida, New Mexico, and California.

The four crew members of SpaceShipTwo VSS Unity, including the billionaire backer of Virgin Galactic Richard Branson, is strapped in and about to take off.

The spacecraft, attached in between the twin fuselages of mothership WhiteKnightTwo, will take off from a traditional runway at Spaceport America in Truth or Consequences, New Mexico.

Once the mothership, with its four jet engines, reaches about 50,000 feet altitude, it will drop the spacecraft. VSS Unity will then light its own rocket engine, and shoot up to an altitude over 50 miles above the desert floor.

With all the intense physics of hitting Mach 3 and ripping through the Earth's atmosphere, something can always go wrong during spaceflight.

And Virgin Galactic has prepped SpaceShipTwo for quite a few contingencies.

During this test flight, all four of the passengers will be suited up with parachutes — just in case, Virgin Galactic President Mike Moses told CNN Business' Rachel Crane.

And if the cabin loses pressure, both of the pilots will be wearing oxygen masks to ensure they don't lose consciousness. And the space plane is carrying a load of extra oxygen that can be used to pump the cabin full of air even if a leak is sprung, Moses said.

"We have enough onboard air to feed a leak, four times over," he said. "Then, our air-launch system lets us actually check for those leaks before we release it in the first place. So if we take off, and we see that we've developed a leak, we just don't release [SpaceShipTwo] from the mothership. We come back home."

Getting Richard Branson to space is a two-step process — and frankly, it's weird.

If you know anything about quirky aerospace visionary Burt Rutan and his early involvement in Virgin Galactic, you'll understand why.

There are no NASA-esque rocket towers or launch pads being used here.

SpaceShipTwo is a winged, rocket-powered spaceplane that takes off from an airport runway, attached beneath the conjoined wings of a mammoth mothership, called WhiteKnightTwo, which is essentially a twin-fuselage airplane. That must sound strange, and that's because it is indeed a very strange looking setup:

The two vehicles fly conjoined up to about 50,000 feet altitude, at which point the spacecraft, with its four occupants inside, drops from its mothership. SpaceShipTwo's single rocket motor will fire up as soon as the spacecraft detaches in order to blast the vehicle up to nearly 300,000 feet in just one minute.

If all goes according to plan, of course. Though Virgin Galactic has successfully sent a crew to the edge of outer space three times, it was forced to abort a test as recently as December of 2020, when the rocket failed to ignite.

SpaceShipTwo, controlled by two pilots, can house up to eight paying passengers in its cabin, offering them panoramic views of the Earth and the star-speckled expanse of the cosmos through its twelve circular windows.

This is a question a lot of space nerds — and, apparently, Jeff Bezos' team at Blue Origin — care a lot about.

There is no single definition of "outer space." And deciding where space begins is largely an exercise in pinpointing exactly where the Earth's atmosphere becomes less troublesome than the Earth's gravitational pull. But there is no exact altitude where that happens. The atmosphere thins out, but the "vacuum of space" is never really devoid of matter entirely. It's a blurry line.

Where does space begin? Does it begin when you look up, and the sky goes from blue to dark and speckled with stars? What about when you just go so high enough that you float, like you see with astronauts on the space station?

An orbiting spacecraft moves at the right speed so the curve of its fall matches the curve of Earth. Because of this, the spacecraft keeps falling toward the ground but never hits it. As a result, they fall around the planet. The moon stays in orbit around Earth for this same reason. The moon also is falling around Earth.

And while Branson and his crew won't be going into orbit, they will be experiencing microgravity, as they freefall from the peak of their journey, very similar to what astronauts experience on the ISS. Except they're not moving at over 17,000 mph like the people on the ISS, so the SpaceShipTwo will come screaming back down to Earth rather than continuously circling the planet.

But when it comes to suborbital — AKA flights that don't drum up enough speed to enter Earth's orbit — Branson and Bezos' space companies are fixated on what altitude they reach.

Branson's flight today is expected to reach more than 50 miles high, which is the altitude the US government considers the beginning of outer space.

Bezos' flight on July 20 will hit more than 62 miles high — also known as the Kármán line — which is the altitude internationally recognized as the boundary.

Exactly which is correct — the US-accepted 50-mile mark or the internationally accepted 62-mile Kármán line — is widely debated and mostly arbitrary.

But when we say the international community "recognizes" or "accepts" the 62-mile Kármán line as the edge of space, we're mostly talking about one organization: The the Fédération Aéronautique Internationale, which keeps track of world records in spaceflight such as tallying how many people have become astronauts.

But even the FAI has said it's considered changing its definition to the US-recognized 50-mile mark in response to research from Jonathan McDowell with the Harvard-Smithsonian Center for Astrophysics.

What you should know: It's not a huge deal. And people that fly on Virgin Galactic and Blue Origin — both US-based companies — will still be in the American-recognized version of outer space. (Though it should be noted, neither company is sending passengers to orbit.)

Still, Blue Origin took the opportunity on Friday to make the outer-space-definition debacle into a Twitter argument.