Robinhood and Reddit in the spotlight during GameStop congressional hearing

Ken Griffin, the billionaire owner of hedge fund Citadel and high-speed trading firm Citadel Securities, is prepared to tell lawmakers Thursday that the trading firm helped meet retail investors’ needs during the surge in trading of GameStop (GME) and other “meme” stocks, but “had no role” in Robinhood’s decision to restrict trading of those stocks.

“I first learned of Robinhood’s trading restrictions only after they were publicly announced,” Griffin said in prepared testimony. “All of us at Citadel Securities are committed to the healthy functioning of the U.S. equities markets.”

The relationship between Robinhood and Griffin’s financial empire is likely to face scrutiny during Thursday’s hearing.

According to Griffin’s testimony, Citadel Securities is the largest market maker in the US equities market. On January 27, as GameStop stock price peaked, the firm executed 7.4 billion shares on behalf of retail investors — more than the average daily volume of the entire US equities market in 2019, he wrote.

Robinhood CEO Vladimir Tenev is again pushing back on the idea that the app restricted buying of certain volatile stocks late last month at the direction of hedge funds or other market makers.

In written prepared testimony ahead of Thursday's hearing, Tenev said:

I want to be clear at the outset: any allegation that Robinhood acted to help hedge funds or other special interests to the detriment of our customers is absolutely false and market-distorting rhetoric. Our customers are our top priority, particularly the millions of small investors who use our platform every day to invest for their future."

Robinhood has said the restrictions were necessary to help the company keep up with clearinghouse deposit requirements amid the volatility.

Among the things Tenev is expected to explain to lawmakers: the history of Robinhood, how it makes money, what financial literacy features the app provides to users and the events that led up to the company having to restrict trading of GameStop (GME), AMC (AMC) and other meme stocks. He is also set to make the case for real-time equities settlements, a change from the two-day system that currently exists.

"There is no reason why the greatest financial system the world has ever seen cannot settle trades in real time," he said. "Doing so would greatly mitigate the risk that such processing poses. Indeed, real-time settlement would have allowed Robinhood Securities to better react to periods of increased volatility in the markets without restricting the purchasing of securities."

"Today, the total value of our customers' assets on Robinhood exceeds the net amount of money they have deposited with us by over $35 billion," Tenev said.

A Robinhood spokesperson said that figure includes both real and unrealized gains since the company launched in 2013.

"While markets fluctuate, this tells me that our business model is working for everyday Americans," Tenev said.

Of course, some Robinhood users are angry over the app's trading restrictions during the GameStop trading frenzy. And others worry Robinhood's business model puts individual investors at a disadvantage to Wall Street firms.

Congressman Patrick McHenry in his opening statement said the people who were investing in GameStop during its Reddit-fueled frenzy knew what they were up to — they knew the risks and potential rewards. And Democrats calling for investor protections are trying to create inequity between the privileged people on Wall Street and day-traders they deem too stupid to trade on their own.

"I believe Americans are far more sophisticated, informed and capable than people in DC give them credit for," he said.

He accused Democrats of trying to pass new regulations that protect retail investors who, "in their minds don't know the difference between dogecoin and the Dow Jones without Congress telling them."

In reality, McHenry said he believes Americans know much more about how to invest than Democrats believe. 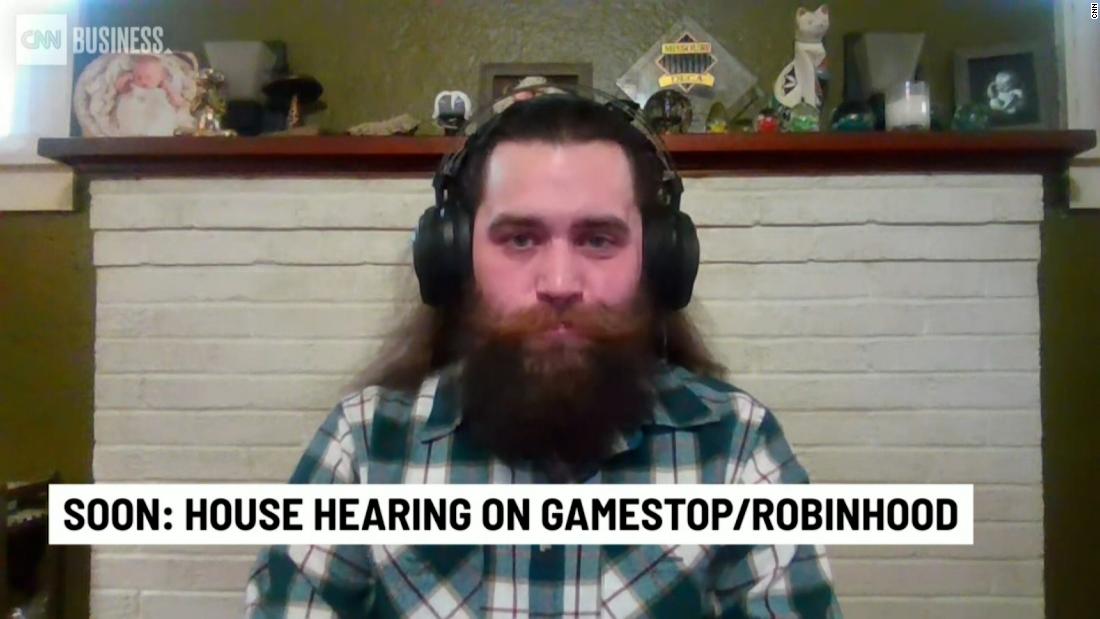 How will lawmakers question Keith Gill? That’s what one Reddit user and GameStop investor most wants to know.

Following Gill’s footsteps, AJ Vanover, a former battery store employee from Missouri, turned a $5,000 initial GameStop investment into more than $1.2 million. He’s still hanging onto the stock, he told CNN Business, and the value of his holdings now hovers at around $300,000 after he sold some to pay off debt and purchase a new computer.

“It’s still considerable,” he said of his portfolio. “I’m going to get my wife a new car. We’ve had a lot of snow lately, so we want something with all-wheel drive.”

Vanover thinks how lawmakers treat Gill will be extremely telling. He argues that Gill “clearly didn’t do any insider trading.”

“He saw a valuable play before anybody else did,” Vanover said, “and took full advantage of it.”

Watch his interview below.

Refresh your browser! Grab the popcorn! 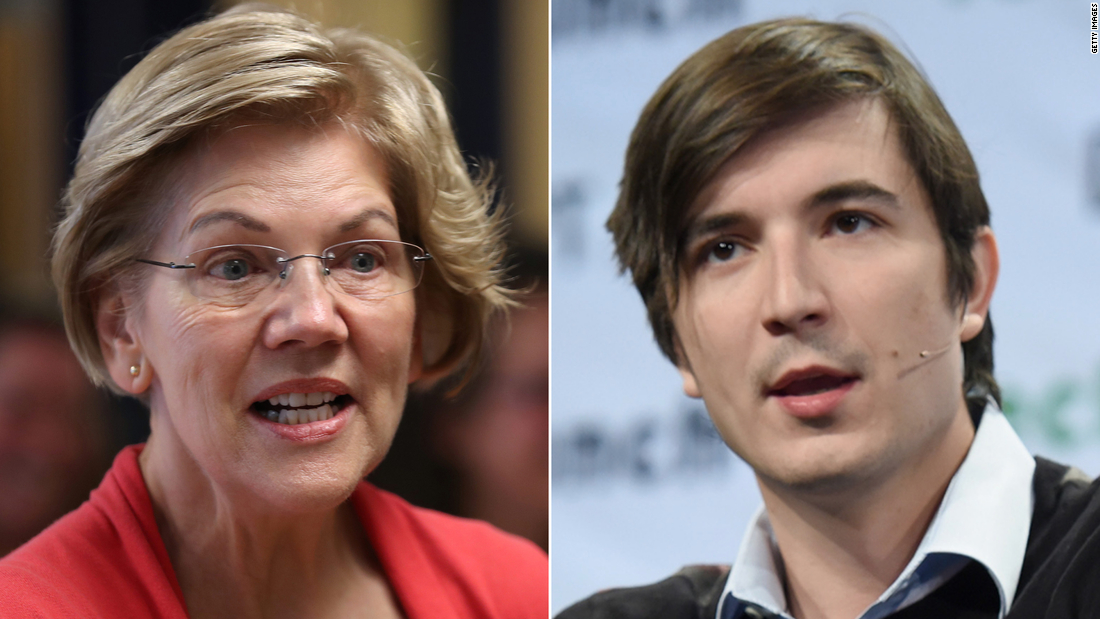 Senator Elizabeth Warren is pushing for answers from Wall Street’s self-regulator over the Robinhood fiasco.

Among other concerns, Warren calls out that, as CNN Business first reported, Robinhood CEO Vlad Tenev does not have a license from the Financial Industry Regulatory Authority.

In a letter to FINRA, Warren asks the regulator to describe what determines whether individuals must be registered, what the registration requirements are for executives at broker-dealers and whether it’s “unusual” that the head of a broker-dealer is not registered.

Some legal experts have expressed concern to CNN Business about Tenev's lack of a license.

Robinhood pushed back: A footnote in Tenev’s testimony said FINRA requires that only those individuals engaged in the firm’s securities business need to be registered. And Tenev is the CEO of Robinhood Markets, the parent company that owns broker-dealer subsidiaries.

In bigger-picture issues within her letter, Warren raised questions about Robinhood’s business model — specifically the controversial practice known as “payment for order flow,” in which brokers route retail trades to high-speed trading firms.

“I am concerned that current oversight of broker-dealers,” Warren wrote, “does not sufficiently prevent conflicts of interest caused by payment for order flow.”

Republican Congressman Patrick McHenry wants everyone to slow down before rushing to push new regulation in the wake of the GameStop trading frenzy.

"It's premature," McHenry, the ranking member on the House Financial Services Committee, told reporters during a call Thursday before the GameStop hearing. "A slow and methodical approach is right, especially when talking about our capital markets."

The Republican also pushed back against criticism of payment for order flow, the controversial practice where brokerages route retail orders to high-speed trading firms like Citadel Securities.

"As long as there is disclosure, it does not appear to me that there is investor harm," McHenry said. "In fact, you've been able to crash fees to negligible or zero based off this practice."

Although no system is "perfect," he said it appears the "good outweighs the bad" when it comes to payment for order flow.

Maxine Waters, the chairwoman of the House panel, told CNN Business she plans to hold multiple hearings on GameStop.

McHenry said he's had no discussions with Waters about future hearings, although he left the door open to it.

"I welcome the debate," he said.

There may need to be “extra protections” and information disclosures for less-sophisticated investors who are day trading, particularly those investing in certain risky products, House Democrat Gregory Meeks told CNN’s Julia Chatterley ahead of today’s hearing before the House Financial Services Committee.

“I’m looking to listen and hear and try to figure out whether or not the rules and regulations that we have in place have kept up with technology of today,” Meeks said.

A senior member of the House Committee on Financial Services, Meeks said he understands Robinhood’s aims to make trading more accessible, but he wants to know if the platform is steering people towards risky products and disclosing enough information to investors.

Meeks wants to understand more about the role of short sellers, including hedge funds, in the recent market volatility and to probe the financial relationship between the Robinhood’ App and the market makers like Citadel.

“We don't want to wait until something catastrophic happens at the end and say, oh, we should have looked at it earlier,” Meeks said.