US stocks closed mostly higher as members in the House of Representatives are starting to vote on the article of impeachment against President Donald Trump. 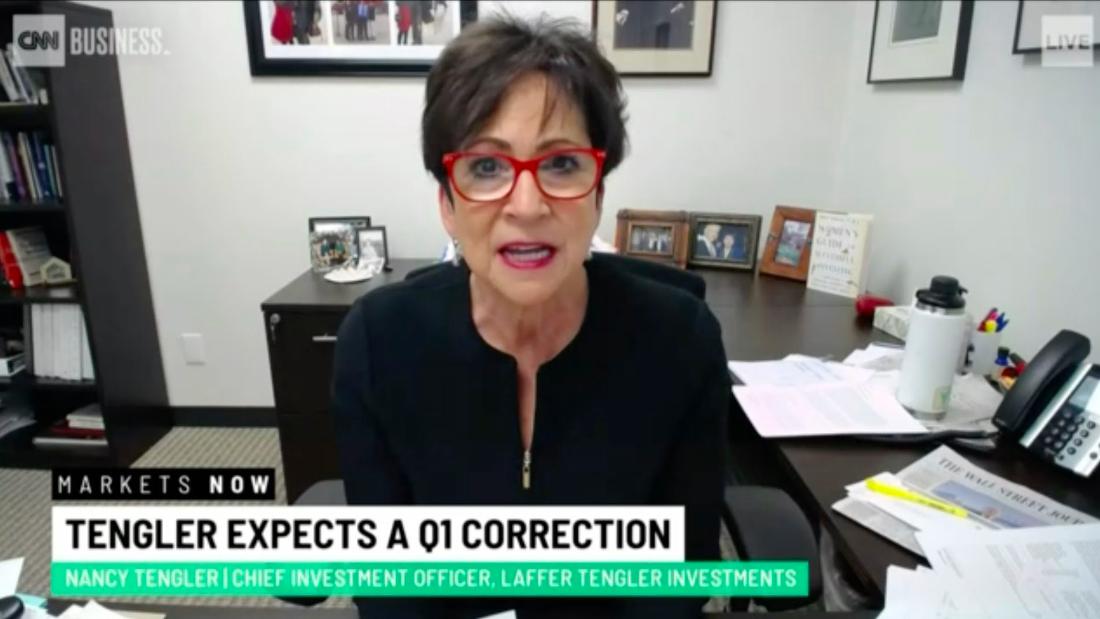 Stocks are near record highs, but can they defend their high valuations? Perhaps not, said Nancy Tengler of Laffer Tengler Investments.

Stocks have had a very strong run and "a pullback would be an opportunity to get access to great companies at a discount," she added.

Tengler said that she likes the space where consumer intersects with tech, companies such as Square (SQ), Walmart (WMT), Starbucks (SBUX) and Home Depot (HD). "Roku is an interesting name for us," she added, as well as Amazon (AMZN) and Apple (AAPL).

She has been trimming social media holdings.

"They had a nice run, we've taken some off the table," she said, including Facebook (FB) and Google (GOOGL).

On the whole, 2021 will likely be another great year for the market, given the expectation for more government stimulus under the in-coming Biden administration.

"We think stimulus will lift all boats," she said.

The central bank will keep interest rates near zero and continue its asset purchases for as long as needed, Brainard said at a lecture at the Canadian Association for Business Economics.

And for those concerned about spikes in inflation, there was some soothing data earlier today: Inflation was only 1.4% last year, giving the Fed ample wriggle room, especially under its new policy framework that allows a little more inflation than the old one. This should rule out any rate hikes in the near term.

The new policy approach, by avoiding the need to tighten preemptively, could support labor market conditions that help to reduce persistent disparities," Brainard said. "This could, in turn, boost activity and increase potential growth by drawing individuals from groups facing structural challenges into more productive employment."

"Lifting the lives of working people is at the heart of economic policymaking," she added.

But the Fed can't go it alone, as Fed Chairman Jerome Powell has said many times. Brainard echoed the sentiment, too.

"If we look ahead, effective vaccines and additional fiscal support are important positive developments, but the near-term outlook is challenging due to the resurgence of the pandemic, and the economy remains far from our goals," she said. 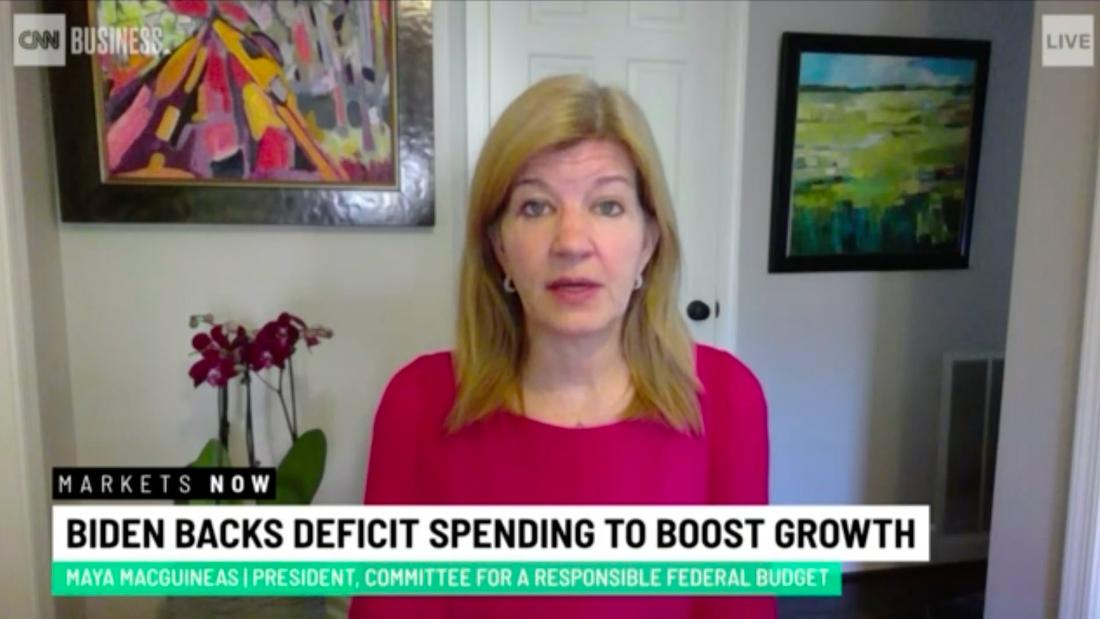 The US deficit has ballooned during the pandemic and the incoming Biden administration is expected to add yet more debt to fund stimulus to get the economy back on track.

And while that's worrying, it's what's needed right now.

I worry about the debt and the debt is too high, but what we first need to do is spend," said to Maya MacGuineas, president of the Committee for a Responsible Federal Budget. "We have to deficit spend until we can get the economy strong enough," she added.

The US economy isn't out of the woods when it comes to its recovery, she told Alison Kosik on the CNN Business' digital live show Markets Now, but we're at a critical moment: The vaccines are a light at the end of the tunnel, yet the jobless crisis is showing no sign of letting up.

For the Biden administration, a targeted approach to additional stimulus is the right way to go, MacGuineas said. That means fighting the virus and giving support to people who are dealing with economic hardship, as well as supporting viable businesses.

She added that "there's a real need for infrastructure spending, and interest rates are low, which affords us a lot more space than we might other have had." 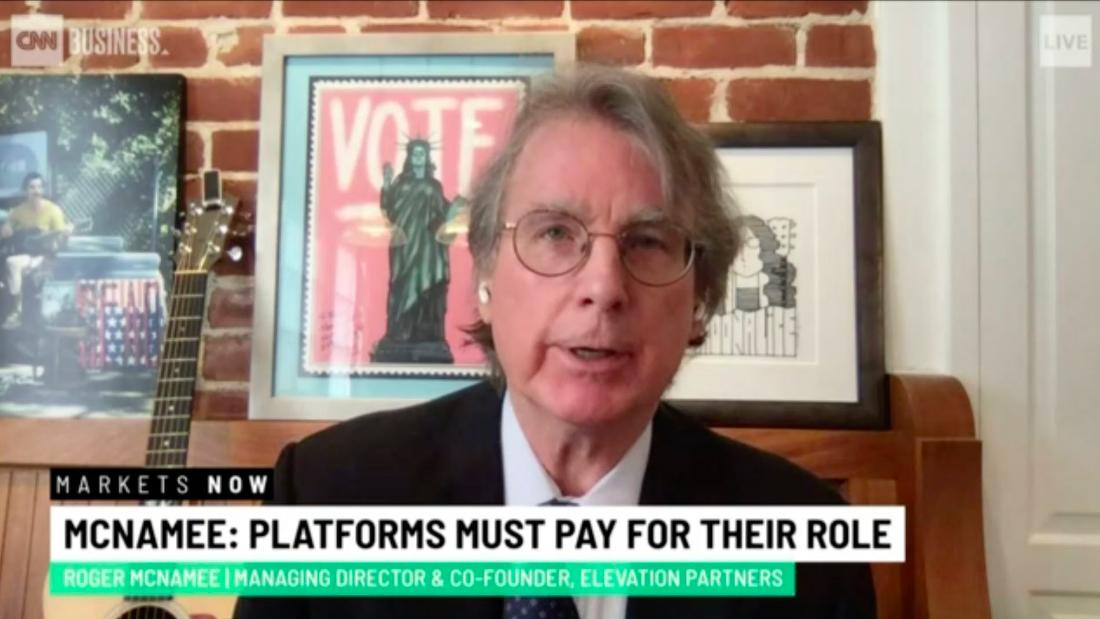 Social media platforms have taken action since last week's violent riot in Washington, deplatforming President Donald Trump and various groups. For critics of these companies, this action is welcome but also a long time coming.

"It's clearly welcome. this is an essential action at a unique moment in time," said Roger McNamee, co-founder of private equity firm Elevation Partners, on the CNN Business' digital live show Markets Now.

"The notion that Facebook didn't play a uniquely bad role in it is laughable," he said.

Social media platforms have been playing with fire for years, McNamee added, saying hate speech was a lubricant for platforms like Facebook (FB).

The red hot initial public offering market is picking up in 2021 right where it left off at the end of last year. Buzzy online lending startup Affirm, which lets people buy now and pay later for goods, soared about 90% in its market debut Wednesday.

Affirm (AFRM), whose CEO and founder is PayPal (PYPL) co-founder Max Levchin, sold $1.2 billion in the stock offering and is now worth more than $22.5 billion. The surge for Affirm follows the big jumps for Airbnb (ABNB), DoorDash (DASH) and Palantir (PLTR) when they began trading late last year.

The company, like many startups, is growing rapidly. Sales in its latest fiscal year nearly doubled to more than $500 million. But like most unicorns, Affirm is not yet profitable.

Still, the successful IPO is the latest feather in the caps of the so-called PayPal mafia, former executives at the digital payments giant who went on to even bigger things in the world of tech and finance.

And oh yeah, some guy named Elon Musk, the CEO of Tesla (TSLA) and SpaceX, was part of that group, too.

Tomorrow is jobless claims day, and the data is unlikely to show signs of improvement.

Economists polled by Refinitiv expect that another 780,000 Americans filed claims for unemployment benefits last week. That would only be 7,000 fewer than in the prior week. Ugh.

Weekly first-time jobless claims haven't shown improvement for weeks. After dropping below 1 million in late August, they have stayed in a tight range for an economy that's meant to be recovering.

Worse still, these numbers don't include claims from workers such as the self-employed who filed for Pandemic Unemployment Assistance, which are counted separately.

There's no letting up for America's jobs crisis. The last stimulus package has extended the pandemic-specific benefits introduced in the CARES Act and added a weekly $300 to regular aid. But more will likely need to be done once President-elect Joe Biden takes office next week.

Tech stocks are among the winners today, and the Nasdaq Composite is up 0.4% at midday.

Intel (INTC), which said this morning that its CEO Bob Swan is being replaced, is the best performer in the S&P.

An hour into the trading day, stocks are modestly higher across the board as the focus remains on Washington.

While all three indexes are in record territory, they remain at arm's length from the all-time highs they hit Friday.