US stocks closed in the green on Wednesday, continuing to rebound from the selloff sparked by Delta variant fears.

Even so, the three indexes have not yet fully reclaimed the ground they lost over the past sessions.

It's that time of the year again, when we start talking about the debt ceiling -- the maximum amount of debt the Treasury Department can issue.

A new report from the Congressional Budget Office projects that if the debt limit isn't raised "the Treasury would probably run out of cash and be unable to make its usual payments starting sometime in the first quarter of the next fiscal year."

The government's next fiscal year begins on October 1, 2021. The CBO projects the Treasury would run out of cash within weeks, some time in October or November.

Of course we knew this was possible. Treasury Secretary Janet Yellen has warned of "catastrophic economic consequences" if the debt ceiling is not raised. And debt ceiling drama has occurred in 2019, 2018, 2017 -- well, you get the idea.

Meanwhile in Congress, Senate Minority Leader Mitch McConnell has set the stage for just  such a clash this year, saying Republican lawmakers will not vote to increase the federal borrowing limit.

In 2019, the bipartisan budget act suspended the debt limit until July 31, 2021 -- which is just 10 days hence. On the following day, on Sunday, August 1, the debt ceiling will be reset to $22 trillion, plus whatever borrowing took place during the suspension period.

And while that's a lot of money, it's simply not enough.

Volatility is back with a vengeance as the Covid-19 Delta variant is shaking up investor confidence everywhere -- a reminder that the pandemic is far from over.

So what is keeping investors up at night?

That volatility might not translate to a market-wide selloff, but industry-specific corrections have been apparent across tech, financials and now energy and materials stocks, Tengler told Alison Kosik on CNN Business' digital live show Markets Now.

"Those rolling corrections is maybe the [market-wide] correction we're going the get," she said.

For now, Tengler sees investment opportunities in tech and discretionary consumer companies as her approach to trading the reopening leans on what we've learned during the height of the pandemic.

In a word: digitalization. "Where digital meets consumer is one of our favorite places," she said pointing at Chipotle (CMG), Starbucks (SBUX) and Disney (DIS).

The housing market has been on fire throughout the pandemic, and the bullish conditions fueling its momentum show no signs of abating, according to Dave Flitman, CEO of Builders FirstSource (BLDR).

"I really don't think there's a slowdown in sight. We have 82 million millennials that weren't in the market prior to 2007... the uptick in demand is sustainable," Flitman told Alison Kosik on the CNN Business digital live show Markets Now.

Combine that with a decade of under-building, and that makes for a pretty bullish scenario, he added.

Even so, the industry is still struggling with some of the dynamics and shortages created by the pandemic.

"I think the industry has seen labor challenges for quite some time," Flitman said. His company provides pre-manufactured building materials, which can make home building more efficient and less reliant on skilled labor, he added. Builder's FirstSource also has invested in automation in its production facilities to offset some of the challenges of finding workers, he said.

Remember that steep selloff Monday, over the worries surrounding the Covid-19 Delta variant? Yeah... it was the Dow's worst day of the year -- down more than 700 points -- and its worst session since last October.

But don't panic. A little selloff here and there is healthy for the market, according to Kenny Polcari, managing partner at Kace Capital Advisors. "Everyone is looking for the market to pullback a little bit."

If it was only about the Delta variant, the market wouldn't have recovered as quickly as it did, he added.

"It was a convenient excuse on Monday," Polcari said on the CNN Business digital live show Markets Now. "If the Delta variant was such a huge problem, you would have had a follow through on Tuesday and today."

"I think there are so many other issues that are simmering," he added, among them infrastructure, policy changes ahead and taxation -- a cocktail that likely means more volatility ahead. 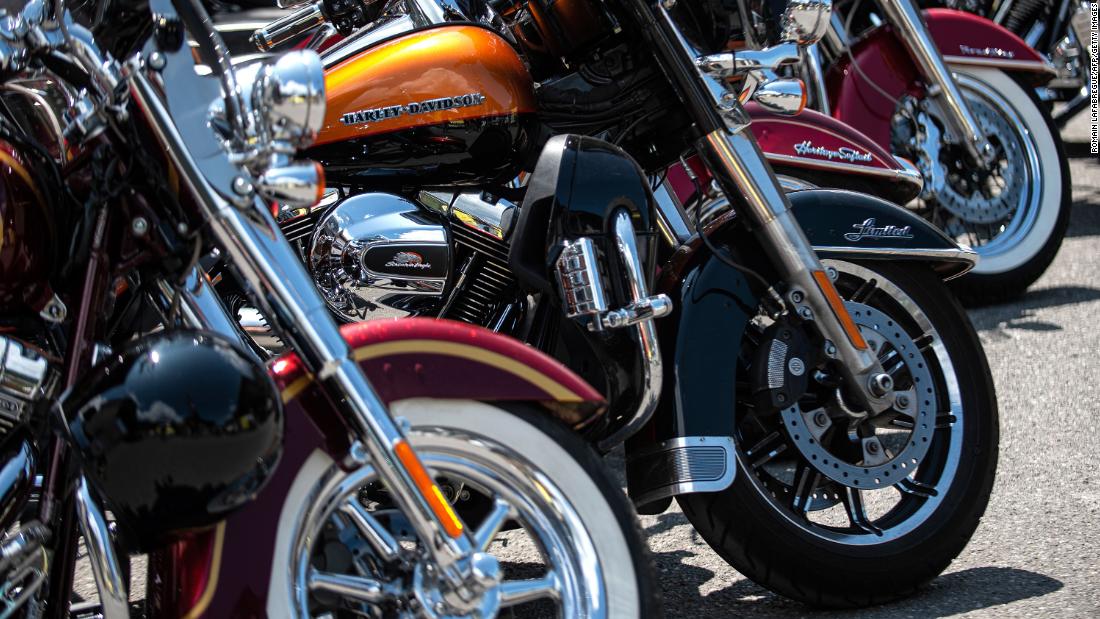 So much for looking for adventure and whatever comes our way. Harley-Davidson (HOG) reported quarterly sales that missed Wall Street's forecasts on Wednesday.

The stock plunged nearly 8% on the news, missing out on the broader market rally.

Harley-Davidson has faced numerous challenges this year that have impacted its results, for example tariffs by the European Union have hurt the company. But perhaps the biggest problem for Harley-Davidson right now is supply chain constraints.

"The supply chain challenges are manifold. They are not just one issue," said Harley-Davidson CEO Jochen Zeitz on a conference call with analysts. Shipping has been delayed because of freight issues, and that's hurt sales in Europe and Asia.

"We see congested ports, shipping container shortages, volatility in schedules and receiving," Zeitz said, adding that "highly publicized semiconductor chip shortages" have been a problem for Harley-Davidson just as it has for big car companies.

Harley-Davidson warned that this could hurt profits for the rest of the year, and not even a 2% price hike for some of its products due to inflation will help much: CFO Gina Goetter said thanks to higher prices for aluminum and steel, "the 2% surcharge will not completely offset what we're seeing come at us."

It's lunchtime and the stock market is still looking good today.

All three major indexes are trading higher, boosted by energy and financial stocks.

The economy is in a confusing spot. At the start of the pandemic, economic activity collapsed into a two-month recession — the shortest on record. Since then it has been recovering. So the economy is definitely expanding, but where are we in the business cycle?

We're smack in the middle, according to Kathy Bostjancic, chief US financial economist at Oxford Economics.

"Our analysis of key economic indicators suggests on balance the economy is in the mid-cycle phase of the business cycle," she said in a note.

These indicators include a buoyant stock market, a V-shaped recovery in manufacturing and retail sales and strong consumer demand.

And it all means there's plenty of room for the economy to expand further, even though there are risks on the horizon — including the Covid-19 Delta variant.

"The pandemic and the massive policy responses have created a unique business cycle, skewing the typical cyclical movement of many key indicators," according to Bostjancic.

That's part of the story about the mismatched demand and supply across production and labor markets. These imbalances could stick around into next year —and the longer they last, the more of a mark they'll leave on inflation.

The Delta variant's spread has investors and financial markets scared, as the memory of severe lockdowns, business closures, job losses and remote schooling is still very near.

And it could affect the economic outlook. Frances Donald, global chief economist and head of macro strategy for Manulife Investment Management, detailed on Twitter four of the chief potential issues: