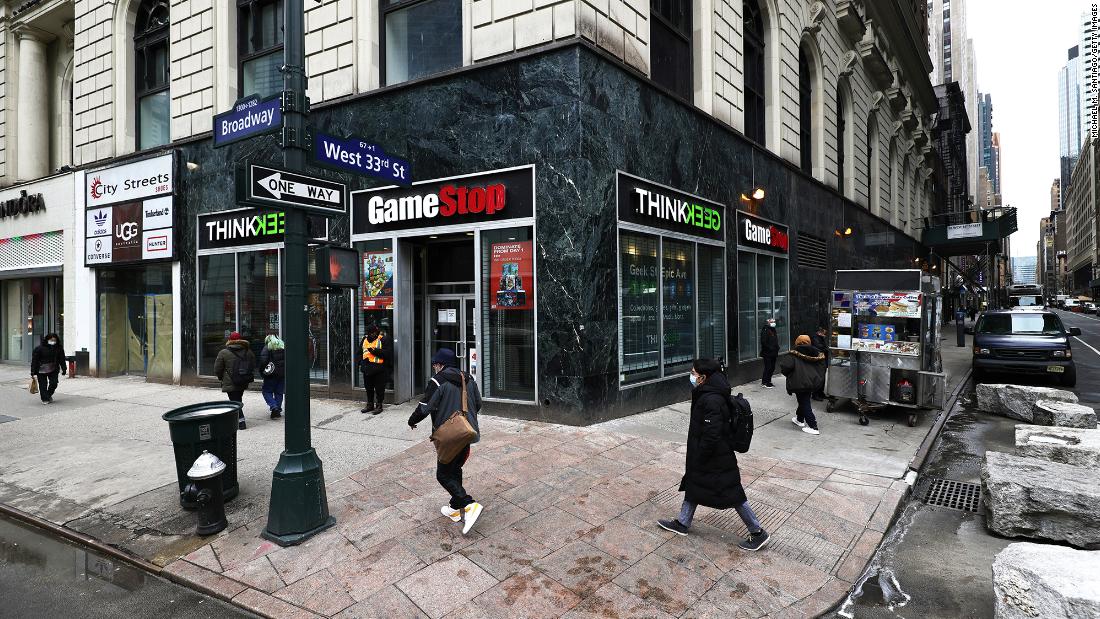 Though the past few days have been extremely volatile for the game retailer's stock (see this and yesterday's liveblog), with Friday's close it has gained 400% since last Friday, 1,784% since the start of 2021 and nearly 8,170% since this date last year.

US stocks finished a turbulent week sharply lower on Friday. The Dow and the S&P 500 recorded their first monthly losses since October. For the week, the two indexes, as well as the Nasdaq Composite, also logged losses.

The volatile week came on the heels of a whole bunch of trends: Analysts fear the massive short-squeeze in GameStop (GME) and other Reddit favorites are beginning to curtail liquidity in other parts of the market as investors unwind positions. On top of that, earnings season is in full swing and investors are taking profits. Meanwhile, worries about whether President Joe Biden’s proposed $1.9 trillion stimulus package can actually get passed and uncertainty over the vaccine rollout are factors on the macroeconomic front. 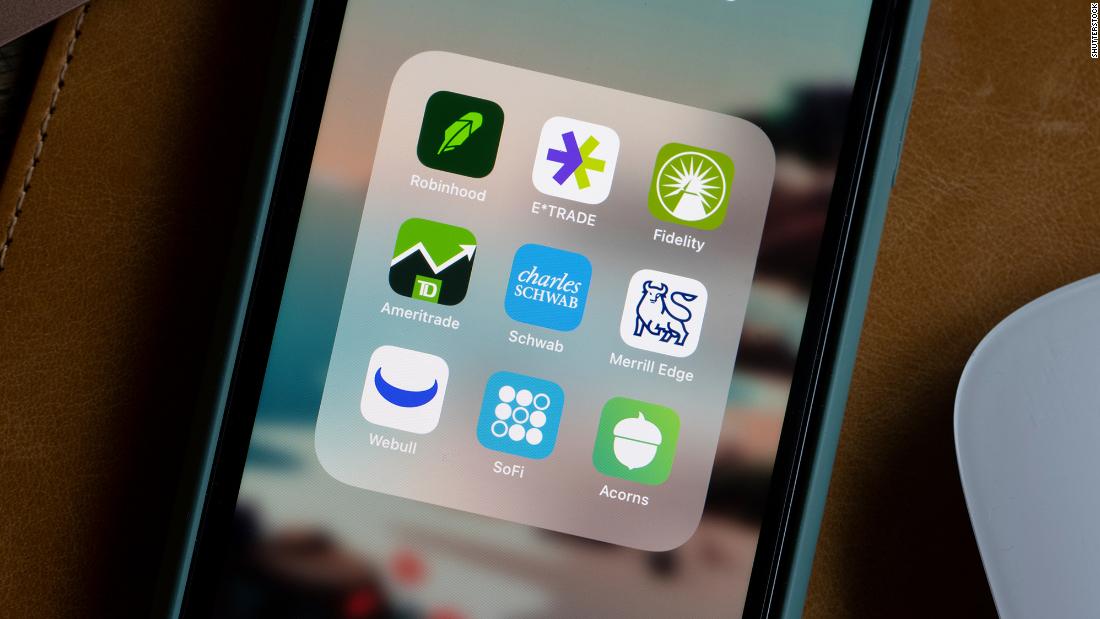 Some Reddit users behind the recent GameStop stock frenzy are moving away from trading on the Robinhood app after it temporarily restricted trades on more than a dozen red-hot stocks yesterday. They say they're moving to alternatives like Fidelity, Schwab and Vanguard, and encouraging others to follow suit.

Fidelity said it is not restricting users from buying or selling shares of GameStop, AMC or Bed, Bath and Beyond, which were among the 13 stocks Robinhood blocked on Thursday. Fidelity said an "above average" number of users joined its platform Thursday, but it declined to say how many.

Charles Schwab, which owns Schwab and TD Ameritrade, says on its website that it hasn't halted the buying or selling of these stocks, but has placed certain restrictions on them.

Vanguard said that its clients usually aren't day traders, but tend to invest in the long-term. It declined to answer whether it's seen an increase of users over the past few days. It added that it was keeping an eye on the market for "significant movements" and has added certain restrictions to protect clients in "a fast moving market" but kept buying and selling available.

On Thursday, Robinhood halted trading of securities including GameStop, AMC and Bed, Bath and Beyond, later describing it as a "risk-management decision." The decision was met with outrage among amateur investors and some lawmakers. One trader responded by launching a class-action lawsuit against Robinhood. The app now allows limited trading of these stocks.

With lawmakers and financial regulators circling, the stock trading platform Robinhood is looking to ramp up its presence in Washington.

The platform is searching for a former congressional staffer to advocate for the company before members of Congress and US regulatory agencies.

Robinhood wants someone with “substantial experience” working on Capitol Hill, and who has “existing relationships and positive rapport with relevant government stakeholders and industry groups.”

In short, the company is looking for a well-connected Washington operative, following in the footsteps of many tech companies that have found themselves increasingly rubbing up against US policies.

The job opening was posted as recently as two weeks ago, according to a LinkedIn listing. But in light of the past week’s events, the pressure to quickly fill the role may now be increasing.

US lawmakers have said they intend to hold hearings to probe the role of online trading platforms amid the surge in shares of GameStop and other volatile stocks. And the Securities and Exchange Commission said Friday it would closely monitor moves by financial entities to restrict trading to retail investors, as well as reports of market manipulation.

Robinhood and other platforms have limited the amount of GameStop shares that retail investors may buy. The restrictions, Robinhood has said, reflected a “risk-management decision.” Redditors behind the explosive group Wall Street Bets held AMA (Ask Me Anything) sessions on Twitter and Reddit on Friday to answer questions that have been coming their way this week.

They note that since the GameStop stock spike attracted public attention, the community has grown to over six million subscribers, up from 300,000 during the past year.

Describing the community of r/wallstreetbets as "irreverent and self-deprecating," the team of moderators wrote that users originally gathered in this group to talk about their stock market losses and gains and celebrate or lament those experiences. The moderators denied having ties to "real world subcultures," such as Trump supporters, Occupy Wall Street or the alt-right.

There are a large number of people in America today that see a series of risky lottery tickets as a more viable path to the American dream than grinding away at a day job," the moderators wrote.

They declined to comment on the SEC's monitoring of the volatility that's been linked to their collective trades, saying "we are not the judges of this affair."

The group also shed some light on its philosophy towards Wall Street.

GameStop mania didn't happen in a vacuum. It's just the most glaring example of the bubble-like behavior running rampant in the financial markets.

Long before an army of Reddit traders sent GameStop, AMC (AMC) and other stocks "to the moon," evidence of extreme market speculation had been mounting.

Shares of Airbnb, DoorDash and other unprofitable start ups have gone straight up on their first day of trading. Shell companies with no operating assets have raised gobs of money thanks to a phenomenon known as SPAC mania. Tesla (TSLA) is now worth nearly $800 billion -- more than every other major automaker combined.

None of this is normal. Rock-bottom interest rates are forcing investors to take extraordinary risks -- and for some, this will end badly.

I think we've had a bubble for some time. This is just icing on the cake. When things get out of control like this, it is a sign that you should be very worried." 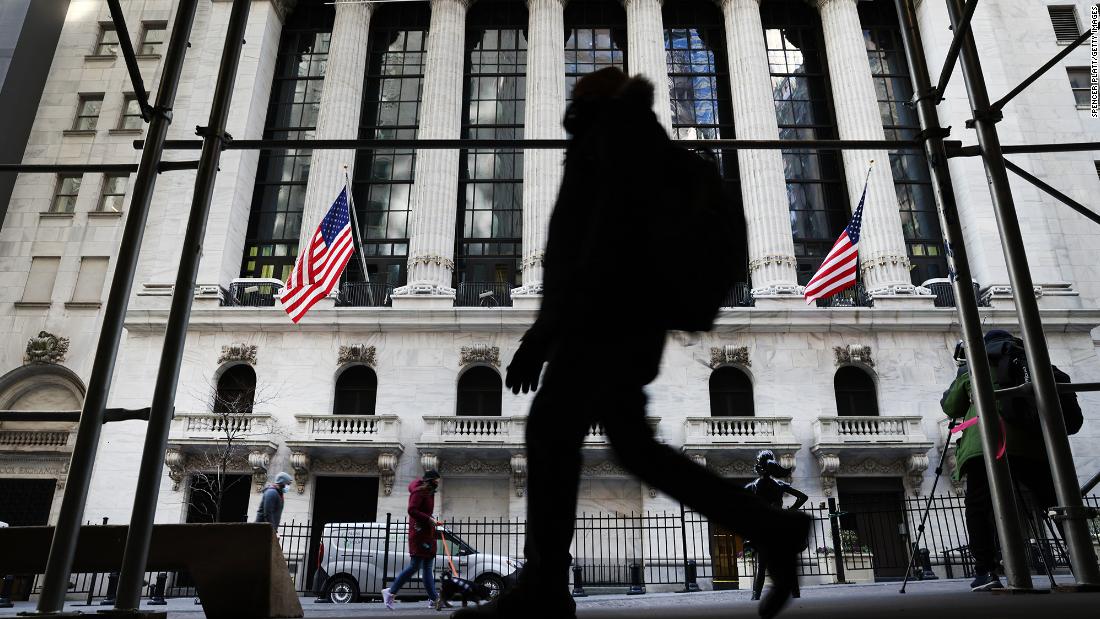 GameStop's rally is one thing, but the rest of the market looks pretty bleak today.

The major indexes are all down more than 2% and the Dow and S&P 500 are on track for their first monthly loss since October. Ouch!

The irony is delicious. An online flash mob beats Wall Street insiders at their own game.

Connected on social media during a work-from-home pandemic using free trading apps, the little guy sticks it to the man.

The man, of course, is Wall Street. Specifically, the high-frequency traders, hedge funds, and bank prop desks that for years have run the show.

Connected by the Reddit community WallStreetBets, small investors followed the advice on Reddit to drive up shares of GameStop, AMC and others. That buying spree cost the big hedge funds who were betting against those stocks billions."

It's a populist uprising armed with no-fee brokerage accounts instead of pitchforks. And no one is crying for the "sophisticated" Wall Street players.

There was immediate online derision after billionaire investor Leon Cooperman (who has no position in GameStop) said these traders "don't have any idea what they are doing" in an appearance on CNBC. "The reason the market is doing what it's doing is, people are sitting at home, getting their checks from the government, basically trading for no commission and no interest rates."

It was a lonely defense of the Wall Street elite, and this week the short squeeze became the newest front in America's class war.

Investors betting against GameStop (GME) have, to quote John Goodman's character in "The Big Lebowski," entered a world of pain.

Short-sellers with a bearish position in GME were on track to lose more than $7.8 billion today, according to research from S3 Partners.

Ihor Dusaniwsky, the managing director of predictive analytics for S3, said in a tweet that GameStop short-sellers have recorded nearly $20 billion in losses so far in 2021.

The shorts have been squeezed hard as GameStop continues to surge. It was up more than 80% on Friday and has now soared nearly 1,800% this year.

Short-sellers have been forced to buy back stock that they borrowed and sold because they need to return the shares fast or risk losing more money as the stock climbs higher.

Dusaniwsky pointed out in another tweet that movie theater chain AMC (AMC), also a target of short-sellers, is inflicting pain on those betting against it -- although the losses aren't nearly as dramatic. Shorts had lost more than $210 million Friday and nearly $525 million this month.

It's been a tough week for the bears. Citron Research, a firm that made a name for itself by recommending stocks to short and was attacked online by the Reddit WSB crowd, announced Friday it is no longer going to point out stocks it thinks are overvalued and will instead focus exclusively on highlighting buying opportunities.