Our live coverage has ended. Scroll through the posts to see how the false alarm played out.

Fears of a hijacking at Amsterdam Airport Schiphol briefly brought the airport to a standstill today — before it emerged that an alarm had been activated by mistake.

Here's what you need to know about the incident:

Air Europa tweeted that the Schiphol Airport incident was a false alarm.

The airline said "a warning that triggers protocols on hijackings at the airport" was activated by mistake.

Mark Crompton shared a photo from Amsterdam’s Schiphol Airport, which showed large crowds and confusion as the suspicious situation unfolded at the airport.

“Military police at the airport due to ongoing situation with an aircraft,” he wrote on Twitter.

The Dutch military police have confirmed that the passengers and crew involved in a "suspicious situation" at Amsterdam Airport Schiphol are safely off the plane.

“There is currently an emergency situation at Amsterdam-Schiphol airport. The situation is causing flights at the D and E, even number gates to be directed to hardstands. The airport is operating. No further info on nature of emergency,” FlightRadar24 tweeted. 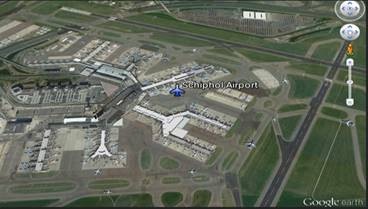 This is a GRIP 3 report — that means that there is a potential threat to the well-being of the population within a municipality.

A spokesperson for the Marechaussee spoke of a "suspicious situation" on board an aircraft. The details of the situation are still unclear.

According to CNN affiliate RTL Netherlands, an alarm sounded at Schiphol Airport. Emergency services are on the road or already on site for a "suspicious situation on board an aircraft".

The Dutch police force, also known as the Royal Netherlands Marechaussee, is currently investigating a "situation" on board a plane at Amsterdam Airport Schiphol.