Our live coverage has ended for the day. Read more about the situation here.

Thousands of people are stranded at the border between Poland and Belarus in terrible conditions, trapped at the center of an intensifying geopolitical dispute.

The migrants — most of whom are from the Middle East and Asia, and who are hoping to travel on from Poland deeper into Europe — have been gathering on the Belarusian side of the Kuznica border crossing. Authorities closed the crossing on Tuesday, with aerial footage showing large crowds congregating in the area.

Here are key things to know about the situation:

Read more about how the crisis is unfolding here.

Belarus Foreign Minister Vladimir Makei said that the Belarusian side was doing everything possible to reduce the flow of migrants. This was stated by the head of the Ministry of Foreign Affairs of Belarus to journalists on Friday, Belarus state media BelTA reports.

“Just a month ago, we deprived 30 travel companies of the right to invite migrants from other countries. We detained about 700 violators at the border. About 2,000 people who arrived in Belarus from other countries and who do not have properly executed documents were sent back. And sending each person back is also associated with financial costs," said Vladimir Makei, according to BelTA.

The Belarus foreign minister stressed that no international laws were violated, and visas are issued only to those who apply based on the rules that exist.

According to Makei, in a situation when four packages of sanctions were introduced against Belarus, the country had to shift all its efforts to protect the border mainly from external threats such as those related to the smuggling of drugs and weapons.

"In this situation, of course, the level of security of the border, through no fault of ours, has certainly objectively decreased. But I repeat once again, this was the result of absolutely irresponsible and thoughtless steps that were initiated by the European Union," said Vladimir Makei as cited by BelTA.

According to BelTA, the Belarus foreign minister called the accusations against Belarus of organizing a targeted flow of migrants to Poland and the Baltic countries a "blatant and groundless lie."

"The fact that they are trying to accuse Belarus of allegedly organized delivery of migrants through its territory is an absolutely blatant and groundless lie. There is not a single proof," said Vladimir Makei, BelTA reports.

Amnesty International has criticized the United Kingdom's decision to send soldiers to Poland to help reinforce the Polish-Belarusian border fence, while migrants and refugees there face a humanitarian crisis.

"Sending British soldiers to erect more border fences rather than address the needs of people dying at those borders shows a shocking disregard for both human life and the right of people to seek asylum. This is already a humanitarian disaster which every government involved continues to ignore while exacerbating the dreadful suffering of people affected," Amnesty International UK’s refugee and migrant rights director, Steve Valdez-Symonds, said in a press release Friday.

According to Valdez-Symonds, the move by the UK will encourage other countries to "go back on their obligations to provide asylum, gravely endanger the lives of people at borders and profit nobody but those who will exploit these people and those who sell fences."

Some context: A UK Ministry of Defense spokesperson told CNN on Friday that a team of Armed Forces members were being sent to Poland to "provide engineering support" on the Belarus border, which Poland’s Defense Minister Mariusz Błaszczak appeared to confirm, saying that the British engineering troops would help strengthen the border fence.

More than 10 tons of humanitarian aid were delivered on Friday to a refugee camp on the Belarus border with Poland, Belarus state media BelTA reports.

According to BelTA, the assistance was supplied by the Belarusian Red Cross, several organizations and enterprises, public and political associations.

"Dozen of vehicles delivered more than 10 tons of food and basic necessities. Among them are bread, canned meat, confectionery, milk, hygiene products, including for children and women, as well as warm clothes. Drinking water is also brought to the camp on a regular basis. Dry firewood is delivered to refugees," BelTA reported.

BelTA notes that new groups of refugees are continuing to arrive at the camp.

Iraq has temporarily suspended Belarus' consular license and is halting all direct flights to the country, its foreign ministry said on Friday.

The actions are being taken to prevent Iraqi migrants from getting visas to or landing in Belarus, foreign ministry spokesperson Ahmed al-Sahaf told CNN.

The North Atlantic Treaty Organization (NATO) said on Friday it was monitoring for any escalation in the situation on its members' borders with Belarus, after Belarusian and Russian paratroopers held joint drills near Poland.

"We will remain vigilant against the risk of further escalation and provocation by Belarus at its borders with Poland, Lithuania, and Latvia, and will continue to monitor the implications for the security of the Alliance. NATO allies call on Belarus to cease these actions, to respect human rights and fundamental freedoms, and to abide by international law," the North Atlantic Council, NATO's principle political decision-making body, said in a statement.

The Belarusian defense ministry said the drills were "in connection with the buildup of military activity near the state border of the Republic of Belarus."

Turkey has suspended ticket sales to Iraqi, Syrian and Yemeni citizens wanting to travel to Belarus, which has become a focal point for migrants and refugees seeking to reach Europe in recent months.

The move, which was announced by the Turkish Civil Aviation Authority on Friday, comes after pressure from the European Union on international carriers, such as Turkish Airlines, to stop bringing people from the Middle East to Minsk, the Belarusian capital.

“Due to the problem of illegal border crossings between the European Union and Belarus, it has been decided that the citizens of Iraq, Syria and Yemen who want to travel to Belarus from Turkish airports will not be allowed to buy tickets and boarding until further notice,” the Turkish Civil Aviation Authority tweeted on Friday.

The European Commission said on Friday that talks with Turkey, Iraq, Lebanon and the United Arab Emirates to try to halt migrants who they say are being encouraged by Belarus to travel to the bloc were already showing fruit. Belarus has denied any wrongdoing.

The bloc continues to work "very closely with the airline sector to prevent the trafficking and smuggling of people to the border region in Belarus," an EU Commission spokesperson told reporters Friday in a press briefing in Brussels. "Iraqi Airlines has confirmed that it will not resume flights to Minsk and Turkish Airlines will also suspend sales of one way tickets to Minsk from Turkey."

"I was in Dubai yesterday where I was impressed by the commitment of the authorities of the UAE, to work with us to put an end to these practices," Schinas said. "I would like to salute publicly the decision by the Turkish Civil Aviation Authority that has announced a couple of hours ago, their decision to also limit this type of operations. And I got assurances from my interlocutors here in Lebanon [they are] also ready to work with us."

Russia and Belarus flexed their military might for a third time this week near the Poland-Belarus border, where thousands of people are stranded in deplorable conditions, trapped at the center of an intensifying humanitarian and geopolitical crisis.

On Friday, Russia and Belarus held joint paratrooper drills near Poland, exercises the Belarusian defense ministry said were "in connection with the buildup of military activity near the state border of the Republic of Belarus."

Some 15,000 Polish soldiers have been deployed to Poland's border with Belarus in recent days in reaction to a tense standoff that the European Union, the United States and NATO say is of Belarusian leader Alexander Lukashenko's making.

Western leaders, including prime ministers of neighboring Poland, Latvia and Lithuania, are accusing the Lukashenko regime of manufacturing a migrant crisis on the EU's eastern frontier as retribution for sanctions over human rights abuses.

Lukashenko's government has repeatedly denied such claims, instead blaming the West for the crossings and treatment of migrants.

Trapped in the crossfire are upwards of 2,000 people stuck between Poland and Belarus who are now facing conditions the United Nations has called "catastrophic," with desperate scenes of hunger and hypothermia playing out in freezing forests and at makeshift camps at the border.

Russia, Belarus' largest (and most important) political and economic partner, continues to defend Minsk's handling of the border crisis while also denying any involvement in it.

Read more about the crisis here: 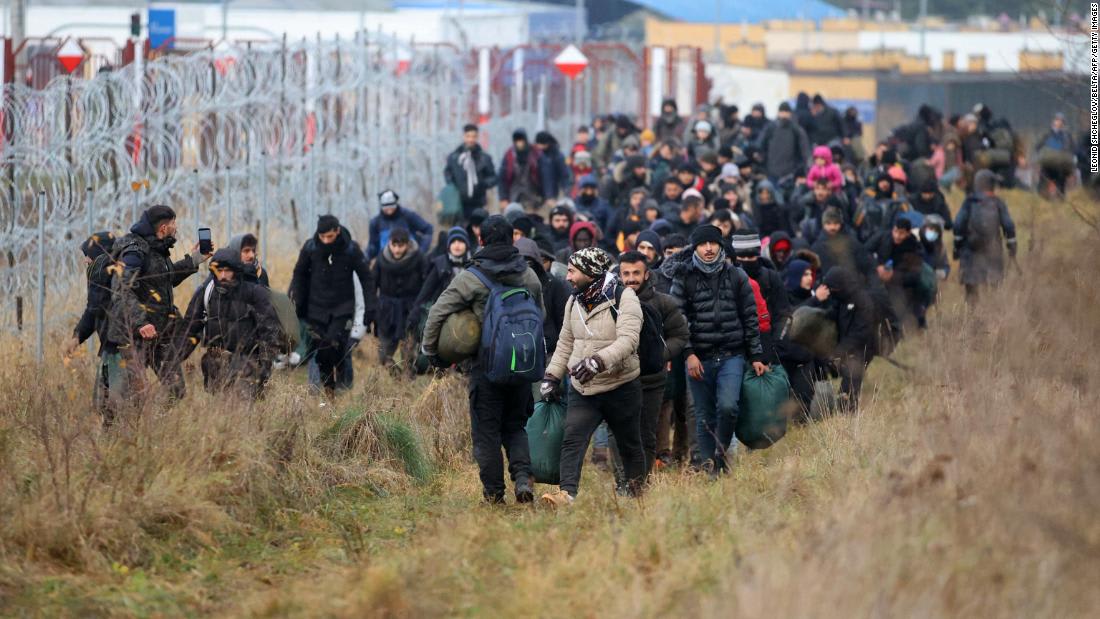 The United Kingdom will send a team of Armed Forces members to “provide engineering support” to Poland on the Belarus border, a UK Ministry of Defense spokesperson told CNN on Friday.

“The UK and Poland have a long history of friendship and are NATO allies. A small team of UK Armed Forces personnel have deployed following agreement with the Polish Government to explore how we can provide engineering support to address the ongoing situation at the Belarus border,” the spokesperson said.

Poland’s Defense Minister Mariusz Błaszczak appeared to confirm the news on social media, tweeting: “Reconnaissance began before the support of the British engineering troops. Our soldiers will strengthen in strengthening the fence on the Polish-Belarusian border. After the reconnaissance is completed, we will inform you about the details.”