You can find our continued coverage here, with analysis here.

For the last four days, the chaos of British politics was put on pause.

The Queen’s jubilee -- a celebration of the 70 years of the monarch's reign -- meant many in Britain were focused on the celebrations, where images of street parties, balcony appearances and colorful parades down the Mall engulfed national papers and TV programming.

Boris Johnson, whose premiership has been engulfed in scandal for months after it emerged he attended illegal parties during lockdown -- and who subsequently, became the first sitting UK Prime Minister to be found guilty of breaking the law -- was able to appear at legitimate gatherings outside Buckingham Palace on Saturday and Sunday, enjoying a brief respite from the constant speculation about his job security (although he was booed as he arrived to a religious service at St Paul's Cathedral with his wife, Carrie on Friday.)

However that calm was shattered at 8 a.m. on Monday morning, when a long-expected confidence vote in Boris Johnson was announced.

Johnson was always expected to survive the vote. Three of his predecessors as Conservative Prime Minister have faced leadership challenges during their stint -- only Margaret Thatcher succumbed.

The final result, though, is about as bad as any of the Prime Minister's allies could have expected. A staggering 41% of Johnson's lawmakers put on record that they have no confidence in their leader; an astonishing outcome less than three years after he claimed a landslide general election victory.

Johnson will wake up on Tuesday in charge of a deeply divided party, with his authority and reputation even further bruised.

He will limp on towards yet another crucial date -- June 23 -- when two by-elections take place. The Conservatives are tipped to lose both seats and a double defeat will renew clamor among rebelling lawmakers for a change of leadership.

While the party’s rules say Johnson is safe from a confidence vote for another year, those rules can be changed if there’s appetite to do so.

Any new bill he wishes to put before Parliament will likely need to approval of dozens of his rebels to pass. If the MPs who voted against him on Monday decide to do so, they can essentially put a stranglehold on his government.

Meanwhile, the Labour Party, which has led Johnson in opinion polls throughout 2022, will gleefully remind the public at any given opportunity that many of Johnson’s own colleagues don’t back him.

It’s a remarkable contrast to December 2019, when after a thumping electoral success, some observers were predicting the new decade would bring a fresh Tory dynasty, built in Johnson’s image.

Instead, Johnson is a prime minister in survival mode. And even though he's said Monday's outcome is "good news," he will need a drastic turnaround to convince many in his own party -- and the British public that he’s still a winner.

Boris Johnson has attempted to spin his narrow confidence vote victory as a positive, describing the outcome as "good news."

"I think it's an extremely good, positive, conclusive, decisive result which enables us to move on to unite," Johnson said in an interview shortly after the vote.

An astonishing 148 of Johnson's own lawmakers turned against him on Monday night. 211 voted in support of him.

"What it means is that as a government, we can move on and focus on the stuff that really matters to people," Johnson said.

He added that the result gives his government "an opportunity to put behind us all the stuff that people in the media like going on about."

Johnson said he was "not interested" in calling a snap general election -- although he declined the chance to definitively rule one out.

He will however, have to contend with the fact that a significant portion of his own party wants him out -- a situation that has claimed the careers of some of his predecessors.

Keir Starmer, leader of the opposition Labour Party, said "divided Tories" have propped up Boris Johnson's government and that Conservative MPs "have ignored the British public."

In a tweet, Starmer said Johnson has "no plan to tackle the issues you are facing."

In a statement shortly after Johnson narrowly survived his confidence vote, Starmer said: "The Conservative party now believes that good government, focused on improving lives, is too much to ask."

Johnson losing the support of more than 40% of his own party has gifted Labour a talking point that they will be eager to remind the electorate.

After febrile speculation about the number of Conservative MPs who would vote against Johnson, the final figure who rebelled against him was higher than many expected.

A staggering 148 of his own lawmakers decided they had no confidence in Johnson's leadership, against 211 who support him.

That means 58.6% of Conservative MPs backed him -- a worse result than former Prime Minister Theresa May, who had the support of 63% of her lawmakers (200, in a much smaller parliamentary party) when she faced a confidence vote in 2018.

May survived just six months further in the job, before ultimately being forced to resign.

Boris Johnson will survive in his role as Britain’s Prime Minister, but his authority has imploded after narrowly fighting off a confidence vote in his leadership.

211 MPs supported Johnson in the vote, against 148 who voted against him.

He will likely seek to frame the result as a chance to move on, but the slim margin of victory means his job security remains in peril.

Boris Johnson has won his confidence vote, with a majority of Conservative MPs deciding to stick with the Prime Minister.

Boris Johnson can continue as Conservative leader and Britain's Prime Minister if he wins tonight's vote. But the margin of victory is crucial: If a significant amount of his own party's lawmakers oppose him, his authority will be shattered.

If he loses the vote, party rules require him to step down.

A leadership election will then get underway, and as the Conservatives are the UK's ruling party, the winner of that election will also become Prime Minister.

Here's a reminder of the ins and outs of that process: 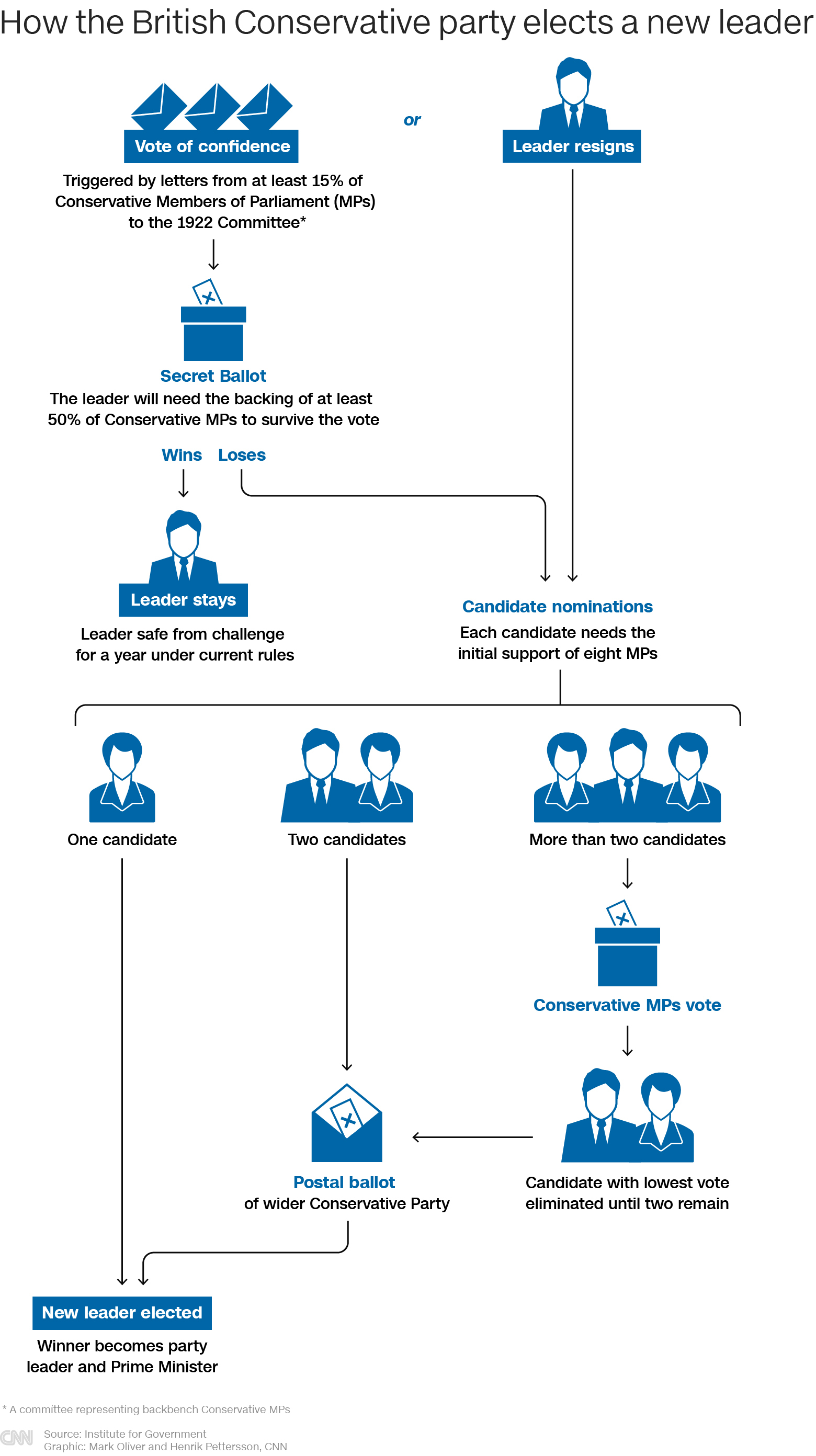 The two-hour voting window for Conservative MPs has closed.