Champions League: Luis Suarez at the double to rescue Barcelona

It's back! After the drama of Tuesday, the Champions League returns with no less than eight matches taking place on Wednesday. So if you've regained your breath after watching Bayern send seven past Tottenham and Real given a rough ride by Club Brugge, then you're in the right place.

It was all eyes on the Camp Nou as Barcelona hosted Inter Milan in the biggest clash of the night. Held to a draw in the opening round by Dortmund, Barca earned a crucial victory against after coming from behind thanks to two Luis Suarez goals. Elsewhere, defending champion Liverpool survived a scare at home to Red Bull Salzburg.

Live scores: All games kick off at 3 p.m. ET unless stated

That's all from us on another thrilling night of Champions League football.

We really have been spoilt over the past two nights, both with the quality and quantity of goals.

Unfortunately, there is now a three-week break until the next round of fixtures, with matchday three taking place on the 22/23 October.

We'll see you then!

From 3-0 up to 3-3 ... perhaps playing at Anfield should come with a health warning for Liverpool fans.

In the end, Mo Salah dug Jurgen Klopp's side out of a hole of its own making.

You can read James Masters' match report on another bonkers European night at Anfield here. 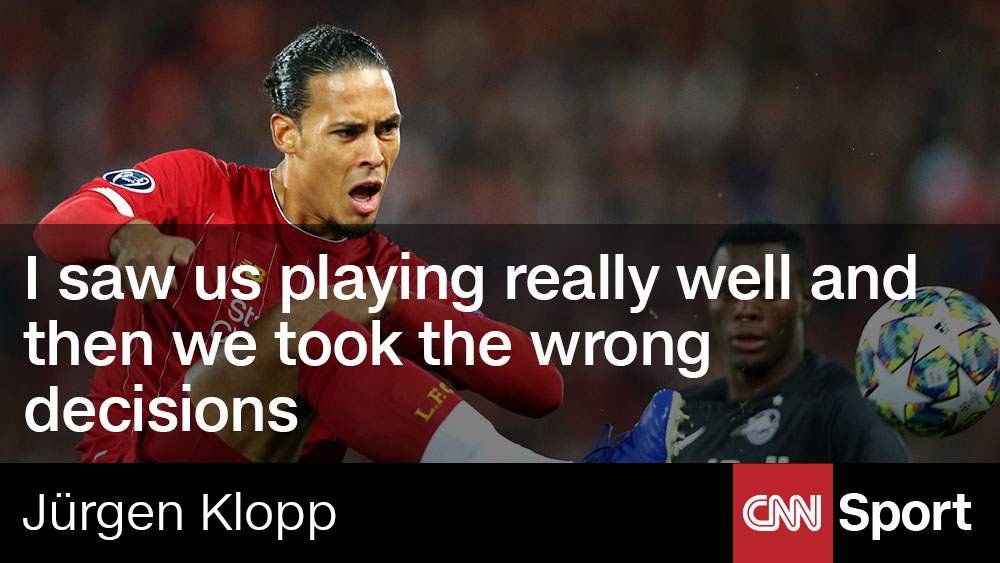 Here is what Jurgen Klopp said, speaking to BT Sport.

"It's better to learn the lessons during the game than talk about it after it. We started incredibly well in the game. We were outstanding in the first 25-30 minutes.
"But it was really difficult to get a foot in the game again (after they drew level). I'm not angry or anything like that. I always take a while to realize what I feel after the game.
"I saw us playing really well and then we took the wrong decisions. Then it is how we want to approach the game from that point on."

Despite the defeat, Salzburg fans can still take great pride in the way their team performed against Liverpool.

Not many teams have the temerity to come from three goals down at Anfield and the Austrians will be frustrated their fightback was, ultimately, in vain.

However, their fans certainly didn't let it dampen their spirits. Here they are, long after the full-time whistle has blown.

He may have started the match on the bench but teenager Erling Braut Håland still found time to once again write his name in the Champions League record books.

For all his undoubted quality, Luis Suarez has rarely found the net in the Champions League over the last two seasons.

However, when his side needed him most, the Uruguayan got a crucial brace to kick-start Barcelona's campaign in Europe.

After Ajax's fairytale run to last season's Champions League semifinal, it was inevitable that the Dutch side would lose some of its main talent to Europe's biggest clubs.

However, despite the likes of Frenkie de Jong and Matthijs de Ligt departing for pastures new, the Amsterdam side has picked up where it left off last season.

The latest victim of Erik ten Hag's swashbuckling side was Valencia, which was on the end of a heavy 3-0 home defeat.

However, the outcome could in fact have been very different. Valencia twice hit the post and captain Dani Parejo blasted an abysmal penalty effort high over the crossbar with his side only 1-0 down.

Hakim Ziyech, who many thought would also leave, scored the goal of the night -- a stunning long-range effort into the top corner.

After 35 minutes of Liverpool's clash against Red Bull Salzburg, the home side was cruising at 3-0 up.

However, some of Liverpool's old defensive demons came back to haunt it as Salzburg replied with three goals of its own in 20 minutes either side of half time.

But just as it looked like the game was finally turning in the Austrian side's favor, up popped Mo Salah to score Liverpool's winning goal. It was Salah's second goal of the night.

That is a huge result for Jurgen Klopp's side following the opening round defeat away to Napoli.

Barcelona has turned this game on its head and has Luis Suarez to thank for securing all three points.

The Uruguayan was at his scintillating best in the second half, scoring one stunning volley and a second sublime effort to give his side victory.

At half-time, it has to be said, Inter deserved to be leading and will be frustrated to have come away with nothing.

That's now five defeats in five visits to the Camp Nou for the Italians.

And it's that man again, Luis Suarez.

So much of the credit for that goal has to go to Lionel Messi, however, as the Argentine wriggles his way through the Inter defense to set up Suarez.

Take nothing away from the Uruguayan though, his first touch to set up the killer second was absolutely sublime.