Flash flooding occurs when rain falls faster than the ground can absorb it. It is “flash” because of the rapid onset; water levels can rise feet/meters in minutes.

While there are many factors that can worsen the impacts from heavy rainfall — ground type, such as soil or concrete, and how much moisture was in the ground to being with — the most important variable is how much rain falls over a period of time, or the rainfall rate.

Human-caused climate change has already fueled extreme rain events in hurricanes and in non-tropical flash flood events like we have seen this week in Europe. This is because of a simple physical relationship — known as the Clausius-Clapeyron equation — between temperature and humidity.

Drought can compound this effect. Very dry soil cannot efficiently absorb water (think of trying to wet a very dry sponge). While the rain is ultimately beneficial, if a region that has been experiencing intense drought gets hit with heavy rain, flash flooding is more likely to occur.

While the overall amount of rainfall may not change over the course of the year in any given location, more of the rain is expected to fall in shorter bursts, which would tend to increase the frequency of flooding events. This was noted by scientists with the European Environmental Agency, who said that “the projected increase in frequency and intensity of heavy precipitation over large parts of Europe may increase the probability of flash floods, which pose the highest risk of fatality.”

This week’s flooding in Belgium and Germany provides an all-too perfect demonstration of this in action. It was only a few months ago that historically low water levels on the Rhine in Cologne, Germany, were disrupting shipping along the river, but now the river is swelled by two months of rain falling in just one day.

Scientists are increasingly able to quantify the impact that a warming climate is having on individual weather events.

A similar, though at first-take not as extreme, flooding event in Western Europe in 2016 that killed 18 in Germany, France, Romania and Belgium, was analyzed by scientists to see if climate change played a role in the floods. They found that a warmer climate made the flooding 80-90% more likely to occur than it was in the past before man-made climate change.

More than 150 rescue workers from France, Italy and Austria are in Belgium “providing emergency assistance to people affected by the catastrophic floods,” the European Commission (EC) said in a statement.

"France, for example, has offered support in the form of boats and helicopters with several teams who have already arrived in Belgium,” he added.

"Austria has also already offered several boats, and so has Italy who offered support. They have offered a helicopters boats and a team of people. Other possibilities of other teams coming from other Member States are now being studied to see whether they can join the teams in Belgium.”

De Keersmaecker said that Germany – the country worst hit by the flooding so far – has not yet requested help from other EU states, adding that the bloc is “prepared to offer our support” if Germany asks for it by activating the Civil Protection Mechanism.

European Commission President Ursula von der Leyen said on Friday that widespread flooding in north-western Europe is evidence of the need for urgency in acting on climate change.

"It is the intensity and the length of the events that science tells us this is a clear indication of climate change and that this is something that really, really shows the urgency to act," von der Leyen said.

Speaking at a news conference in Dublin, von der Leyen spoke of the “horrible” flooding that has taken place in Western Europe where the death toll is at least 103 in Germany and 22 in Belgium.

She added that when scientists give a clear indication of climate change, this is something where we “really, really” need to act.

“I think this is important, just in the frame that we've put forward now a roadmap how to fight climate change how to stop global warming,” von der Leyen said.

"These events show the force with which the consequences of climate change can affect us all, and how important it is to prepare even better for such extreme weather events in the future," Schulze said in a tweet.

The regions impacted by the devastating flash floods in Germany will see ''much better weather in the coming days,'' the German weather service Deutscher Wetterdienst told CNN Friday.

''The situation is easing, we still see showers or thunderstorms in some regions on Friday. Over the weekend we expect dry summery weather, which will prevail throughout all of next week,'' he said.

''This will give the residents of the flooding areas and the emergency services the opportunity to continue their rescue search for missing people as well as time to clear debris,'' Friedrich added.

Here's a look at the rainfall expected in the next 48 hours: 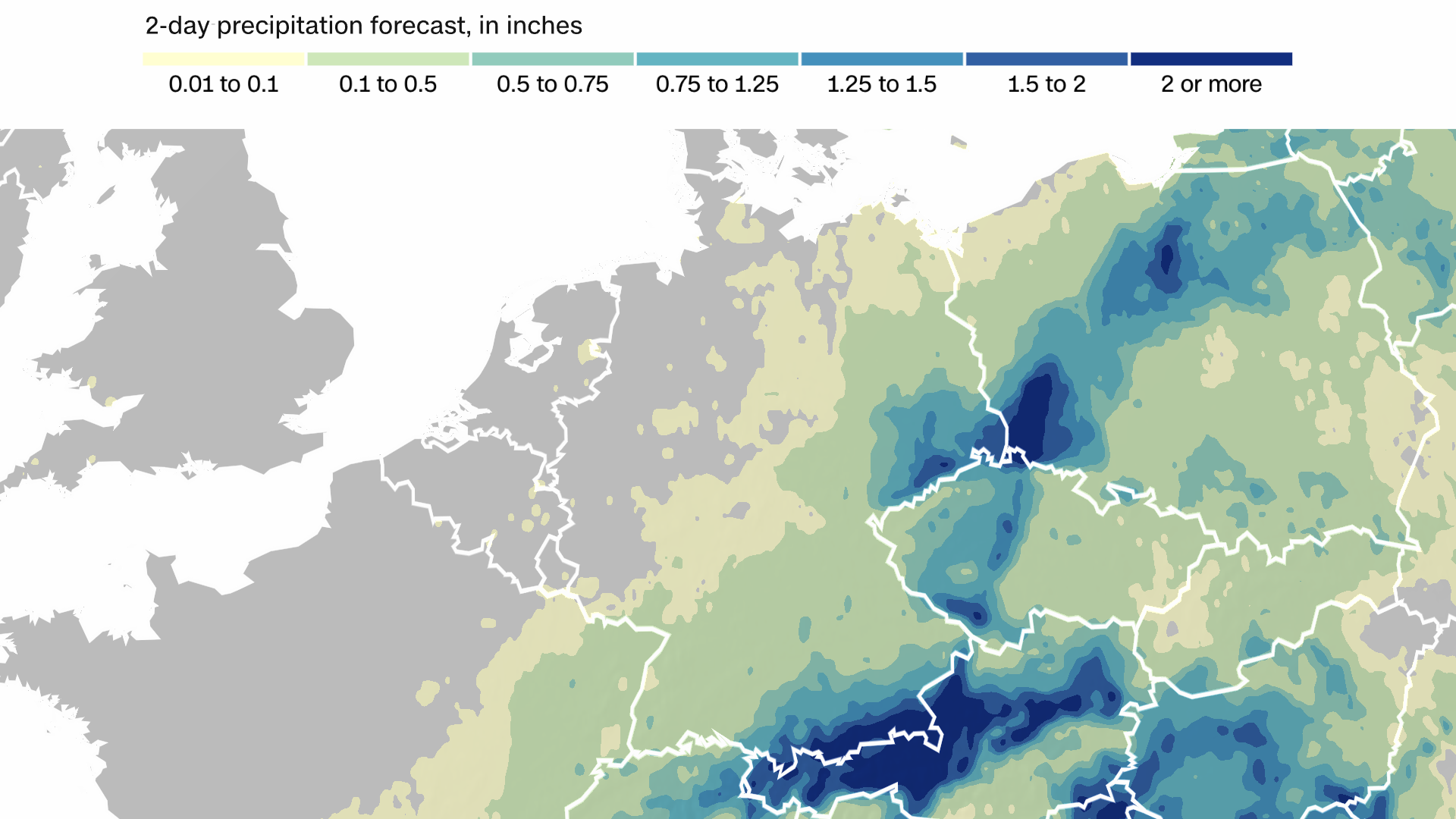 You can check the latest forecasts here.

The death toll from severe flooding in Belgium has risen to 22 and is expected to increase further, the acting mayor of Liege Christine Defraigne told Sky News on Friday afternoon.

The military is conducting rescue efforts by boat and the situation is now under control in the centre of the city, she said.

She urged people to evacuate their homes if they can or to wait for rescue on higher floors of buildings, saying some have been stuck in their homes for two and half days without electricity.

“We'll evaluate the aftermath as the river is coming down, but it's still a very wide stream, and it still remains dangerous. So the aftermath of the crisis and the flooding are going to be very important, very deep because we are expecting many people deceased, and we are afraid to find the corpses," she said.

At least 22 are dead, she said, adding “we are afraid to discover more and more”.

“The most important things in the coming days is [...] to relocate people, as the best way we can do, and to help them to recover," she continued.

Catastrophic flooding in western Europe has left dozens dead and hundreds missing – with Germany hardest-hit as its worst rainfall in a century causes severe flooding.

Large-scale rescue efforts are continuing, amid rising water, landslides and power outages. Shocking images of the devastation show entire villages underwater, with cars wedged in between collapsed buildings and debris.

Here's the latest of where things stand:

A hospital in the Dutch town of Venray, including 200 patients, will be evacuated because of a flood risk, the safety authority for North Limburg said on Friday.

“The safety authority for North Limburg and the VieCuri Medical Center have decided to fully evacuate VieCuri Venlo,” the authority said. “This is a preventative evacuation to avoid the chance of flooding.”

The death toll in Belgium from the flooding has risen to 15, the Wallonia government spokesperson Eric Biering told CNN.

At least 103 people are dead in Germany, bringing the total death toll in western Europe from the severe flooding to 118.

At least 103 people have died in Germany following torrential rainfalls that swept through the country, hundreds are still missing, authorities said Friday, bringing the Europe-wide death toll to 117.

The death toll in Rhineland-Palatinate has risen to at least 60, the state premier Malu Dreyer said Friday, adding that there was bad news every hour.

''We have 60 dead to mourn at the moment and it is to be feared that the number will rise even further, '' Dreyer said at a news conference, adding ''We have not yet reached the stage where we can say that situation is easing''.

''In the meantime, the assessment of all of us is that the damage is so dramatic and enormous that we will have to deal this issue for a long time to come, including the reconstruction of municipalities," he continued.

Earlier, police in Koblenz in Rhineland-Palatine initially said up to 1,300 people were unaccounted – mainly as a result of phone lines being down – but now say they expect those numbers to be revised down as phone lines are restored and rescue operations continue.

Armin Laschet, North-Rhine Westphalia's state premier called the flash floods on Friday ''a catastrophe of historic proportions'', adding that more fatalities are expected as a result.

''The floods have literally pulled the rug from under people's feet," Laschet said.

The German military has deployed 850 staff in a total of 20 counties in Northrein-Westphalia and Rhineland-Palatinate, a spokesman said at a press briefing in Berlin Friday.