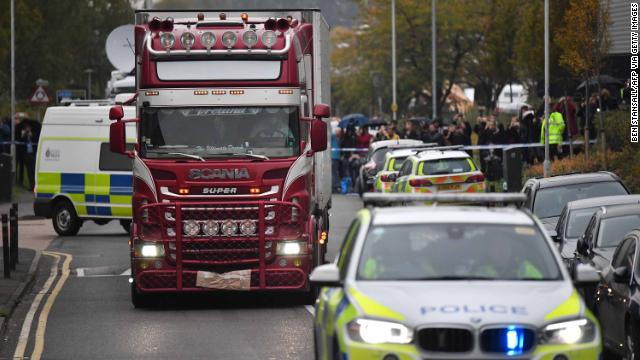 Four people have been arrested this week in connection with the deaths of 39 people found in a container at the back of the truck, at an industrial park in Grays, Essex.

Here's what we know about the investigation:

A Vietnamese government source tells CNN that they have been contacted by a father who fears his daughter is among the dead in the Essex truck incident.

Separately, a Vietnamese government-run newspaper reports that another father has also come forward asking for help in finding his son who went to the UK in the last few days.

The government source told CNN that that a man named Pham Van Thin sent an emergency letter to local authorities in Ha Tinh province, reporting that his daughter Pham Thi Tra My was missing in the UK. The father suspects, the source said, she may be one of 39 victims in the tragedy.

His daughter departed for China on Oct. 3, before heading on to France and the UK, according to the source. Relatives also reported that Tra My sent text messages pleading for help. The government source tells CNN that local authorities in Vietnam have been asked to check into the man’s claims.

Earlier on Friday, Deputy Chief Constable from Essex Police Pippa Mills said the police "will not be commenting on any speculation about the nationalities of those who have tragically lost their lives."

“I strongly urge journalists and people on social media not to speculate about the identities of those involved or the circumstances surrounding this investigation," Mills added.

Police on Friday addressed the issue of the nationalities of the 39 people discovered inside a truck in Essex.

Police had said it believed the victims were Chinese nationals on Thursday, but Vietnamese authorities in London and Hanoi have since then been alerted by family members to the possibility that Vietnamese nationals were also inside the truck.

“This is now a developing picture,” said Pippa Mills, deputy chief constable from Essex Police, when addressing the issue in a televised statement on Friday.

Mills added police would give no more information on the nationalities of the victims until formal identification had been completed.

A 48-year-old man from Northern Ireland has been arrested on suspicion of manslaughter and of conspiracy to traffic people in connection to the investigation into the 39 bodies discovered inside a truck in Essex on Wednesday.

The suspect was arrested at Stansted Airport, the Deputy Chief Constable from Essex Police, Pippa Mills, said in a televised statement on Friday.

Mills also said the three suspects who had been arrested previously remained in custody.

The owner of the trailer inside which 39 people were found dead on Wednesday has shared the GPS tracking information with British Police.

The bodies were discovered when police was called by emergency services to an industrial park in Essex, in the United Kingdom

GPS tracking was activated throughout the entire lease, Danny McNamee, the lawyer representing GTR, the company that owns the trailer, told CNN on Friday.

McNamee also said the trailer allowed for real-time monitoring of the temperature, information which is shared with the truck tractor and the driver. McNamee was unaware if that information would had been sent out remotely.

Asked if the company conducted background checks on haulers it leased its trailers too, McNamee said this type of rental, to a local hauler, was their “bread and butter."

“GTR would have no problem with that rental,” he said, adding that, “The company is completely shocked by this incident."

The Vietnamese Embassy in London has been in contact with Essex Police with the view of establishing if there were any Vietnamese nationals on board the truck where 39 people were found dead on Wednesday.

According to the embassy, Vietnamese officials heard rumors that there could have been Vietnamese victims inside the truck on Thursday and sent a consular official to Essex on Friday to coordinate with British authorities.

The embassy was unable to specify how many Vietnamese nationals are suspected to be among the 39 victims.

The truck container found carrying 39 bodies in Essex was transported from Belgium to the UK on a ferry called the Clementine, CNN has ascertained.

The Clementine belongs to Cobelfret Ferries and regularly shuttles between Zeebrugge, Belgium, and Purfleet, UK, according to maritime timetables seen by CNN.

The Clementine’s timetable matches the timetable provided by UK Police which states that it arrived at Purfleet shortly after midnight on October 23, 2019. No other ship traveled this route for several hours either side of this timeframe.

At this stage the ferry company is not under investigation by authorities but questions have been raised as to how the container could travel through Zeebrugge Port and board a ferry, if it was potentially carrying 39 bodies.

Cobelfret Ferries parent company, C.RO Ports, released a statement on Thursday saying they were assisting “UK, Belgium and other law enforcement authorities with their ongoing investigation.”

Eleven bodies were transported on Thursday night so that post-mortem examinations could be carried out.

Essex Police said in a statement that the first post-mortem examinations will begin Friday, after the bodies of the victims inside the truck were transported from the Port of Tilbury to a mortuary.

Formal identification will then follow the coronial process and will be a lengthy but crucial part of this investigation," Essex Police said.

Police added that as their investigation continues, "the picture may change regarding identification, and we will continue to provide updates when appropriate under the direction of HM Coroner."