On Twitter, Labour leader Jeremy Corbyn has reacted to the European Parliamentary election results, calling for another general election.

He wrote: "With the Conservatives disintegrating and unable to govern, and parliament deadlocked, this issue will have to go back to the people, whether through a general election or a public vote."

Nigel Farage, the ardent Brexiteer, has won a seat in the European parliament for his new Brexit Party.

Speaking in Southampton, UK shortly after winning the seat, Farage said: “There’s a huge message here. Massive message here. The Labour and Conservative parties could learn a huge lesson tonight but I don’t suppose they actually will.”

On Twitter, the British politician wrote: "If Britain does not leave the EU on October 31st, these results will be repeated in a general election."

Europe’s voters have spoken, but not with a single voice.

In what is set to be one of the highest turnouts ever in European elections, the only clear message for Brussels is that Europe must reform if it is to survive. But what that reform looks like is the next big battle to come.

If there's one thing we've learned tonight as the European Parliamentary election projections rolled in, Europe’s populist surge appears to have stalled. Despite winning in Italy, France and Hungary, right-wing, nationalist leaders have underperformed.

European politics is about to become increasingly fragmented. These election results – and the challenge they pose to building any kind of consensus – accurately reflect the extreme divisions between not only the 28 EU member states, but the divisions in those nations.

So, it’s a mixed message for Europe. How the leaders choose to interpret these results will have an immediate impact on key decisions that need to be made. The European Commission needs a new president, as does the European Parliament. The new makeup of Europe and the decisions that are made off the back of these confusing results will have enormous influence on both.

The EU has updated its projection of the European Parliament, with numbers differing slightly to that published a short time ago.

Fun fact: In order for a political group to form, it must consist of at least 25 MEPs who have been elected across at least seven EU countries. 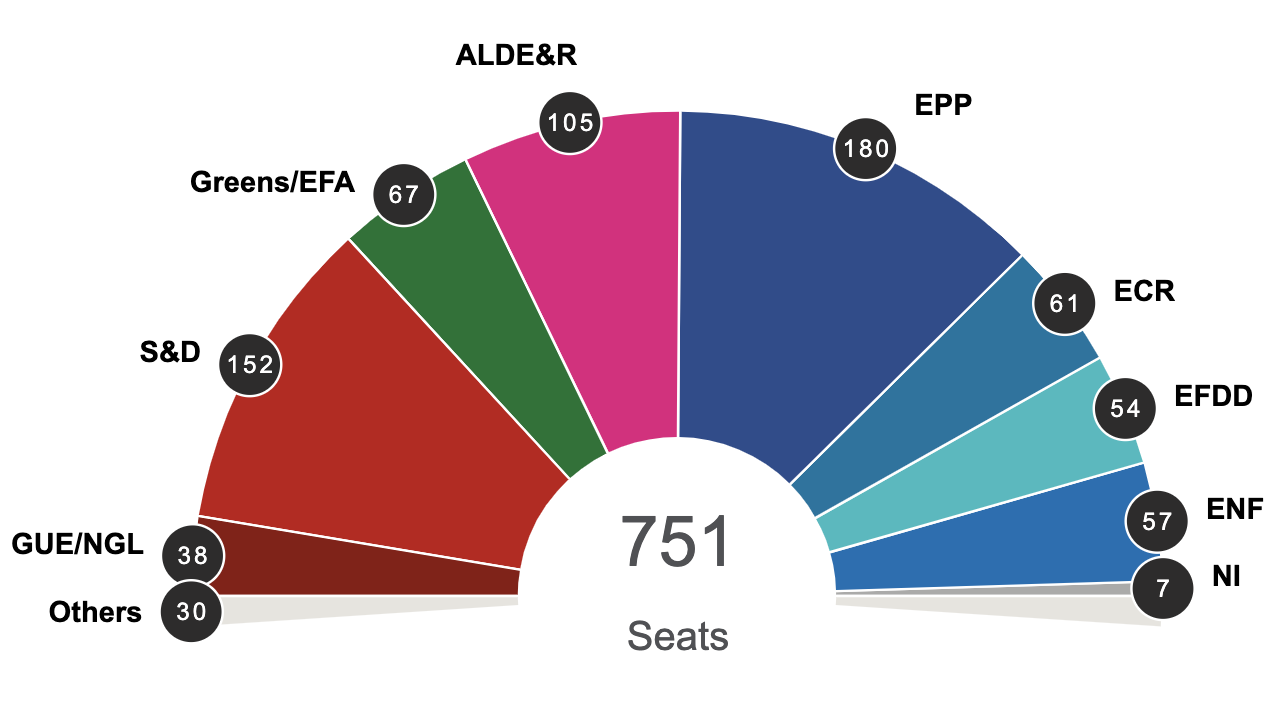 Hungary's far-right nationalist Prime Minister Viktor Orban has scored a huge win according to provisional results, after his Fidesz party received 52.14% of votes.

That's more than three times the amount of the second most popular party, the left-wing Democratic Coalition, which received just 16.26%.

It shows major gains for the Alliance of Liberals and Democrats for Europe (ALDE) with an added 39 seats. It also confirms that the 'grand coalition' of the EPP and S&D have lost their majority after losing 71 seats.

It's important to note that these groups may change once MEPs form new alliances and groups. The above projection is based upon the previous European Parliament groupings.

In April he launched what amounted to a "Make Europe Great Again" campaign, in an attempt to unite far-right political parties across the continent ahead of the elections.

The group hopes to form a majority bloc in the European Parliament.

Salvini's press office shared the following photo after exit polls were announced, with the deputy PM holding a piece of paper that reads: "First party in Italy thank you"

Nigel Farage -- Brexit Party leader and campaigner -- has showed up in Southampton on England's south coast in a particularly buoyant mood.

"It looks good," he said ahead of UK exit poll figures. "I have no idea, I am not making predictions."

He added that hoped both Labor and the Conservatives -- the two main parties in the UK -- "do terribly."