The cost of living: The cost of living is among the top issues for the French electorate this year. Faced with the economic fallout from the pandemic, high energy prices and the war in Ukraine, voters are feeling the pinch, despite generous government support. Though inflation is a problem, unemployment remains historically low.

While financial pressures may be insufficient to whitewash some candidates' extremism in voters' minds, they may push some to look for unorthodox answers to their problems.

Le Pen has also pushed for several measures to help people cope with rising prices, such as slashing sales taxes on fuel and removing income tax for people younger than 30. Le Pen's camp, however, has not fully explained how they will pay for these, according to critics. Others say they may not all be constitutionally sound.

Macron has proposed a swathe of tax cuts, including on income and real estate. But his call to increase the retirement age to 65 has been met with hostility by the French public on both the left and the right, and he appears to have softened his stance on the proposal while campaigning.

The war in Ukraine: Though the fighting is a long way from the bistros and cafes of France, the conflict is certainly on voters' minds. Just shy of 90% of French people were worried about the war in the last week of March, according to pollster Ifop. Given Le Pen's support for Putin before the war started, this has played in Macron's favor so far.

Europe: Macron wants France at the head of a muscular European Union. Le Pen is a famous euroskeptic who, in the 2017 election, proposed a national referendum asking France if they wanted to leave the bloc and abandon the euro. Le Pen says she no longer wishes to exit the EU, but experts say many of her proposed policies would put France on a political collision course with Europe.

Islamic headscarves: Though Le Pen has softened her language around Islam, "eradicating Islamist ideologies" remains one of her two priorities in her campaign manifesto.

She wants to ban Muslim women from wearing headscarves in public -- a member of her campaign team called the garb a totalitarian symbol akin to the swastika.

Macron, while campaigning, has highlighted the threat of Islamists and Muslim "separatists" in France, and his government has closed several mosques deemed radical by authority. However, he has no plans to ban headscarves in public.

The climate crisis: The environmental crisis did not feature as a major issue on the campaign trail. Although the importance of climate protections is gaining traction globally, it's less of a concern in France, which sourced 75% of its electricity needs in 2020 from nuclear energy, according to the French environment ministry. Most candidates in the first round backed the kind of nuclear development Macron has already announced, so there is little divergence on this issue.

However, Macron and Le Pen have sparred over wind and solar power. Le Pen argues that the two are expensive and inefficient -- she also says wind turbines have scarred the landscape of the traditional French countryside -- so she wants to scrap subsidies for both. Macron wants to further invest in both technologies.

Hiba Latreche took a last gulp of water and reached for a date, her eyes flitting between the plates of food before her and her phone screen as it blinked toward 5:42 a.m., the beginning of her fast.

This year, the month of Ramadan coincides with the presidential elections in France, the climax of a campaign that has been marked by anti-Muslim vitriol on a scale not seen for decades.

As France went to the polls for the presidential runoff on Sunday, many French Muslims like Latreche were facing a difficult question: Do these would-be presidents really represent my interests?

Considering the candidates who entered the race, the answer for many is no.

Read more about what French Muslims think of the election here: 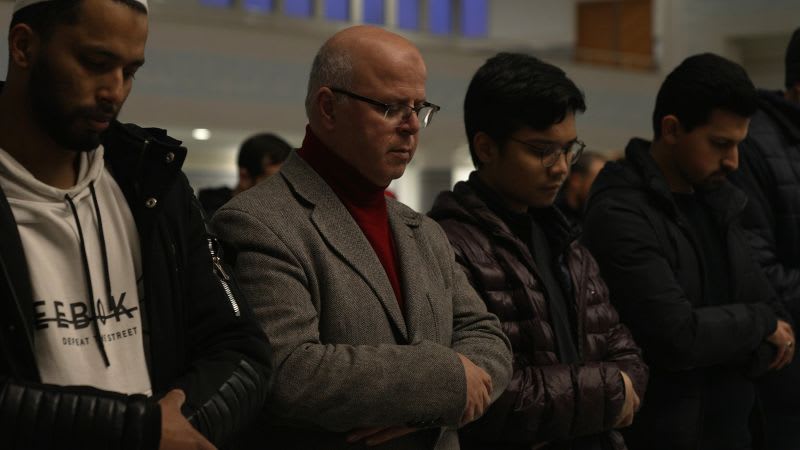 Marine Le Pen is hardly the same candidate who lost to Emmanuel Macron in 2017 by nearly two votes to one.

In the weeks leading up to the first round of the election on April 10, Le Pen campaigned hard on pocketbook issues, often beginning interviews and media appearances by explaining to voters how she would help them cope with inflation and rising fuel prices, top issues for the French public.

The strategy appears to have worked. Le Pen polled far better in the 2022 first round than she did five years ago, and polls conducted before this weekend showed a close race.

Though Le Pen has sought to broaden her appeal, her economic nationalist stance, views on immigration, Euroskepticism and positions on Islam in France -- she wants to make it illegal for Muslim women to wear headscarves in public -- remain unchanged. 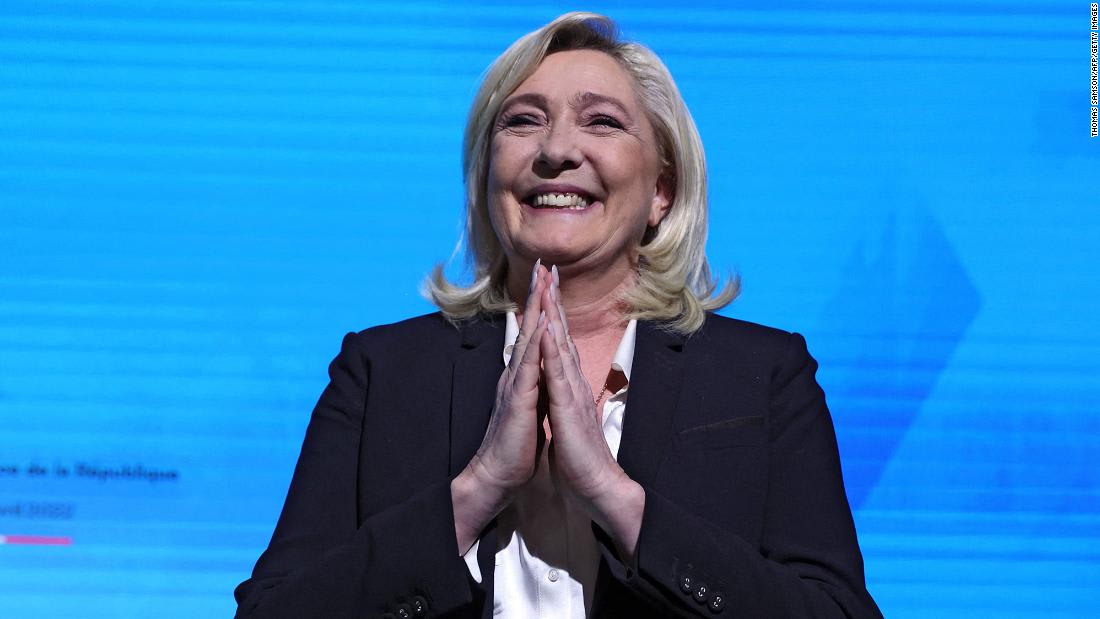 In the shadow of the Eiffel Tower, supporters of Emmanuel Macron are gathering at Champs de Mars for the incumbent French President's election night rally.

Hosting the rally at this scenic location in the French capital is a dream-come-true moment for Macron’s team. They tried to do it for his first election runoff in 2017 but the City of Paris rejected their request because it was preparing to welcome an inspection group from the International Olympic Committee in its bid to host the 2024 Olympics, a spokesperson from the city government told CNN.

French voters will decide whether Macron will speak as the first French president since 2002 to win a second term, or as the first mainstream candidate to be defeated by a far-right challenger.

Turnout in the second round of the French presidential election is low as of late-afternoon in France, according to official figures released Sunday afternoon.

Data shows 65.3% of French voters had cast their ballots by 11 a.m. ET in the second round of the 2017 presidential elections, when Emmanuel Macron defeated Marine Le Pen to become France’s youngest ever president.

Polling stations in most of metropolitan France will close at 7 p.m. local time (1 p.m. ET), while those in major urban centers such as Paris, Marseille and Lyon will close at 8 p.m. (2 p.m. ET).

Today is the second time French voters have headed to the polls to choose their president this month. Twelve candidates stood in the initial contest on April 10, but since none won more than 50% of the vote, the top two -- Emmanuel Macron and Marine Le Pen -- advanced to the runoff two weeks later. 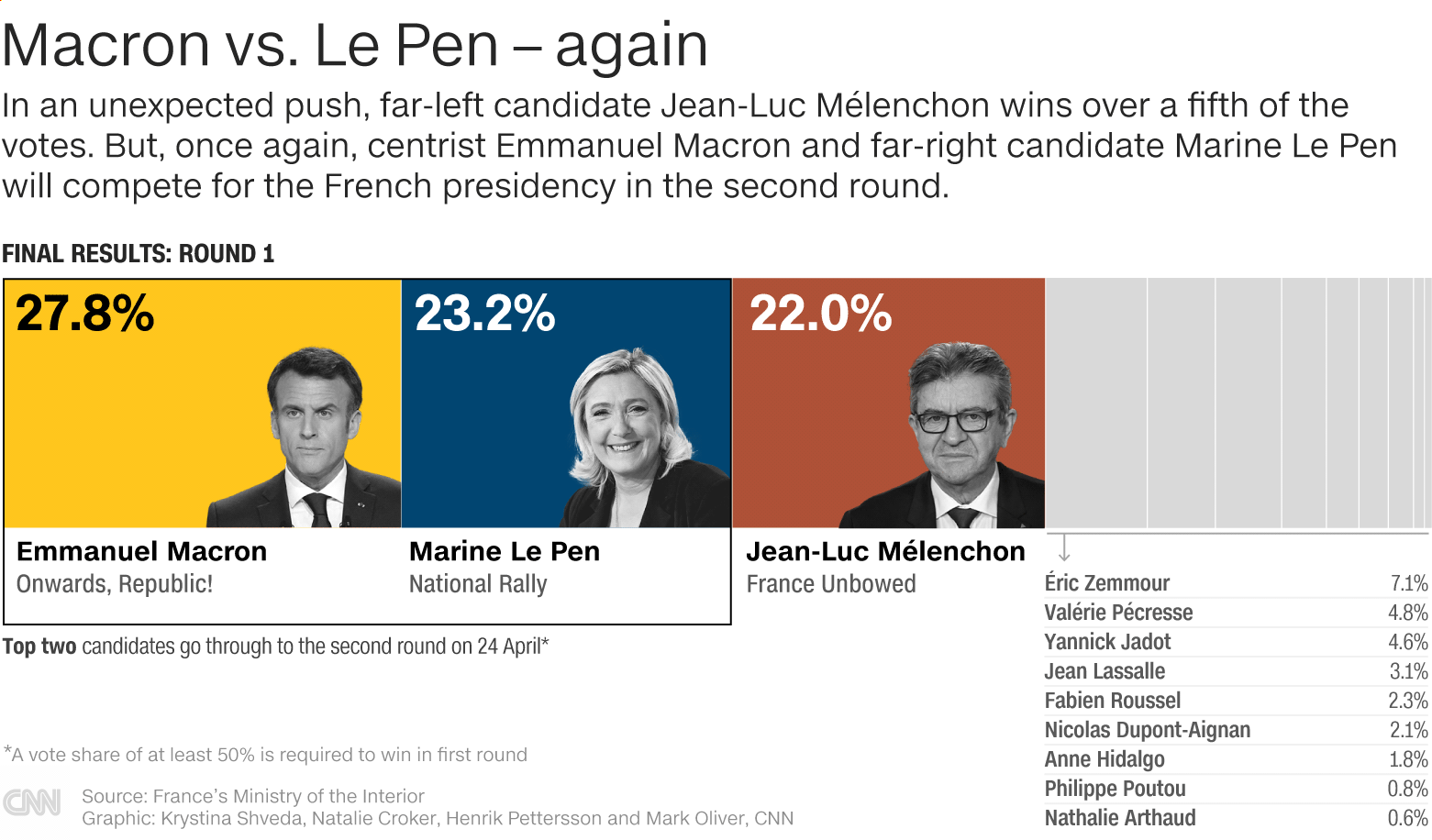 Though Le Pen came in second, Jean-Luc Melenchon of the far left came a close third. No other candidate finished in double digits.

Data from each of France's nearly 35,000 communes show Melenchon performed particularly well in places like Paris' working-class suburbs, while Le Pen won the traditional right-leaning strongholds like the northeast and southeast. Macron performed well in cities and in the historically left-leaning west. 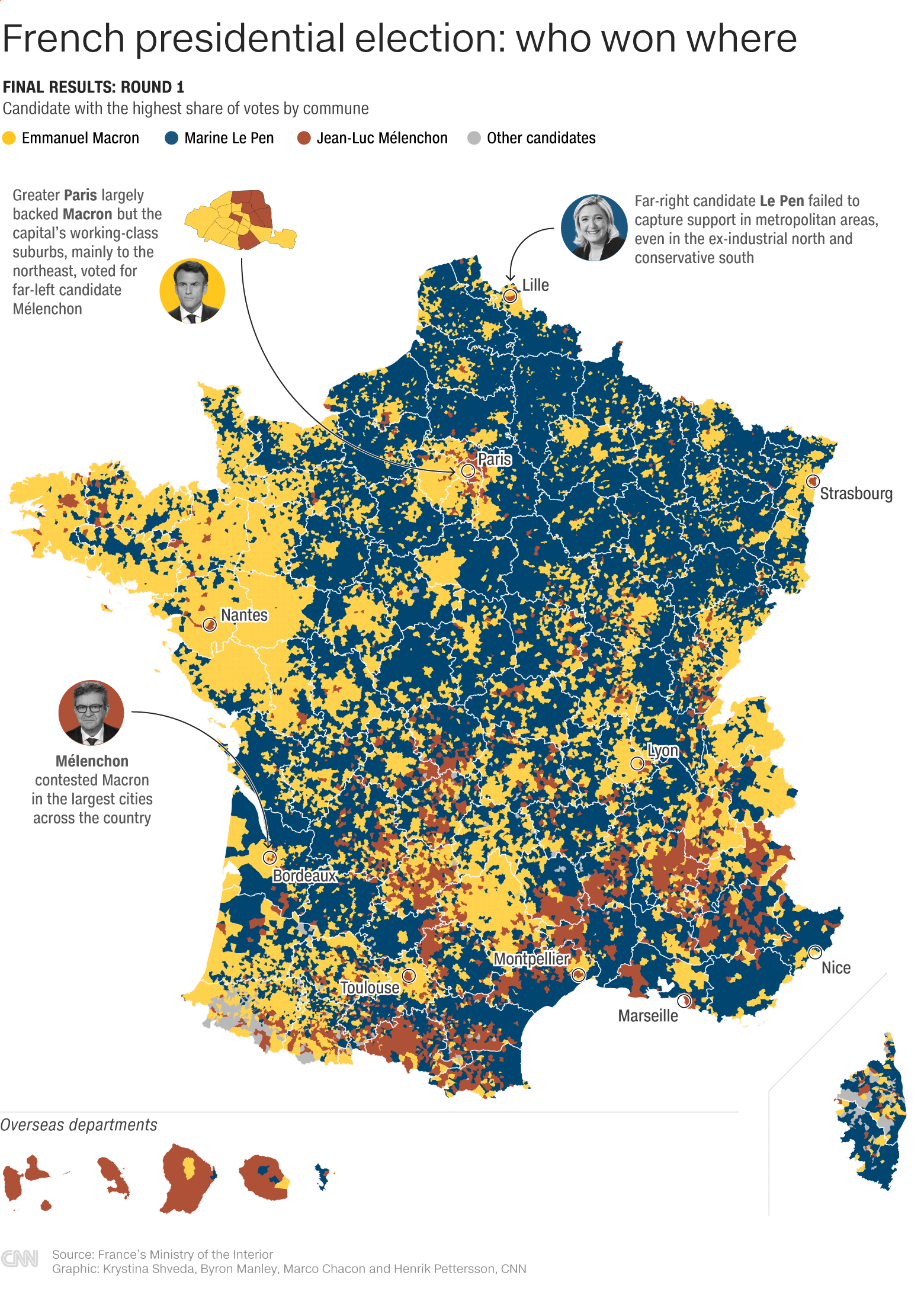 The strong performance of these three candidates underscores just how much French politics has changed since Macron won the presidency in 2017.

His centrist political party has siphoned votes from the traditional center-left and center-right parties, while candidates like Melenchon and Le Pen have successfully wooed voters who are frustrated and angry with mainstream politicians. Far-left and far-right candidates accounted for more than 57% of the ballots cast in the first round.

Other dissatisfied voters simply stayed home this time around. Turnout in round one was the lowest the country has seen in 20 years. 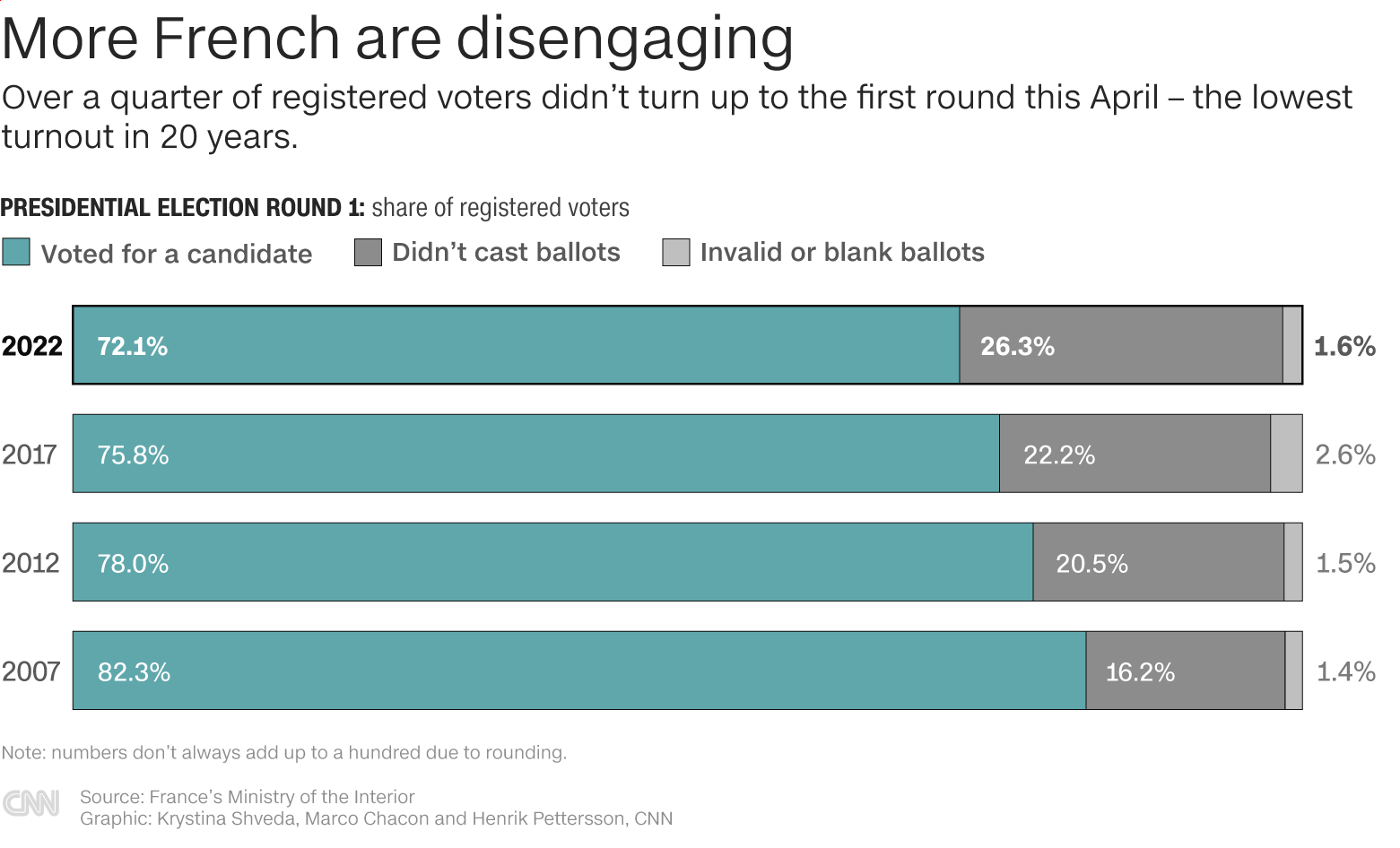 To elect their new president, French voters head to the polls twice.

The first vote, on April 10, saw 12 candidates run against each other. They qualified for the race by securing endorsements from 500 mayors and/or local councillors from across the country.

Macron and Le Pen received the most votes but, since neither won more than 50%, they had to compete in Sunday's runoff.

Another vote soon: This isn't the only national vote France faces this year -- parliamentary elections are also due to take place in June.

Emmanuel Macron is an ex-investment banker and alumnus of some of France's most elite schools. Though he previously served as economy minister, Macron was a political novice before becoming president. The 2022 presidential vote is only the second political election he has ever stood in.

But he is no longer an upstart and must run on a mixed record.

His ambitious plan to bolster the European Union's autonomy and geopolitical heft won him respect abroad and at home, even though his attempts to win over Donald Trump or to prevent the AUKUS submarine deal.

Though ultimately unsuccessful, he was one of Europe's most active leaders in pursuing diplomatic efforts to avert war in Ukraine, speaking directly with Russian President Vladimir Putin.

Macron's domestic policies are more divisive and less popular. His handling of the yellow vest movement, one of France's most prolonged protests in decades, was widely panned, and his record on the Covid-19 pandemic is inconclusive.

Macron's signature policy during the crisis -- requiring people to show proof of vaccination to go about their lives as normal -- helped increase vaccination rates but fired up a vocal minority against his presidency.

Marine Le Pen is the most recognizable figure of the French far right. She is the daughter of Jean-Marie Le Pen, who founded the National Front, the predecessor to Le Pen's current political party, National Rally.

The younger Le Pen has attempted to rebrand the party, as it has long been viewed as racist and anti-Semitic.

In 2017, Marine Le Pen campaigned as France's answer to Trump: A right-leaning firebrand who vowed to protect France's forgotten working class from immigrants, globalization and technology that was rendering their jobs obsolete.

Since then, she has abandoned some of her most controversial policy proposals, like leaving the European Union.

But by and large, her economic nationalist stance, views on immigration, skepticism of Europe and position on Islam in France -- she wants to make it illegal for women to wear headscarves in public -- have not changed. "Stopping uncontrolled immigration" and "eradicating Islamist ideologies" are her manifesto's two priorities.

Le Pen has, however, attempted to soften her tone, especially around Islam and the EU in the wake of Brexit. Instead, she has campaigned hard on pocketbook issues, promising measures that she claims will put 150 euros to 200 euros ($162 to $216) in the coffers of each household, including a pledge to remove sales tax from 100 household goods.

The strategy appears to have worked.

Le Pen's performance in the first round of the 2022 presidential election was her best result in the three times she has run.