Arch-Brexiteer Jacob Rees-Mogg has said that he would not stand for Conservative Party leader if Prime Minister Theresa May loses the confidence vote Wednesday.

Rees-Mogg, who has significant support in the grassroots membership of the Conservative Party, has been a vocal critic of May and has been one of the names touted as a potential successor to May as party leader.

Conservative Party members in British Parliament are voting right now on their faith in Prime Minister Theresa May. Voting — which is done by secret ballot — closes at 3 p.m. ET. We expect to learn the results not too long after that.

If she loses the no-confidence vote she'll be out as the Conservative leader, and she'll likely outline when she will stand down as UK Prime Minister.

How we got here: The vote was triggered after at least 48 Conservative Members of Parliament — that's 15% of them — submitted letters demanding a vote.

What happens now: May needs a majority of Conservative members to stay in power. The magic number is 159. If she gets that many votes, she won't face another challenge for a year.

Here's a handy flowchart of how this process works: 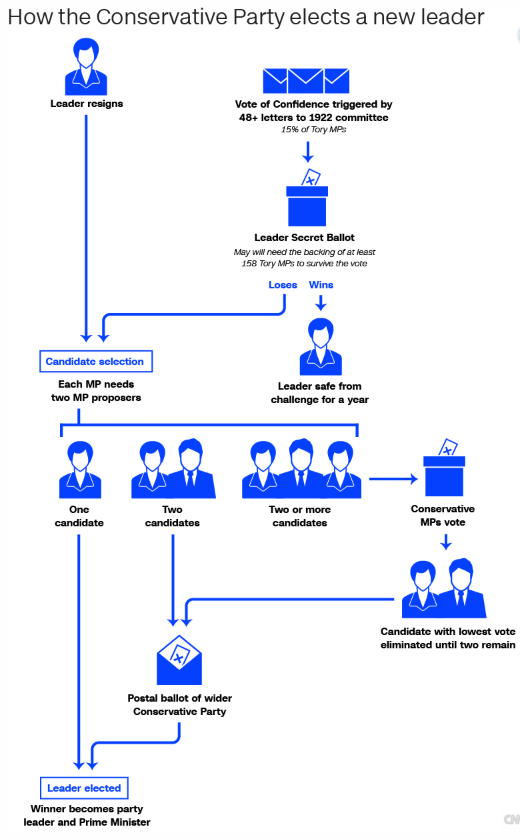 Ahead of tonight's crucial confidence vote, British Prime Minister Theresa May has told Conservative MPs she will “not fight” the next general election in 2022, a lawmaker in the meeting told CNN.

May was making a final pitch to MPs to salvage her premiership in a behind-closed-doors meeting, before they started voting in a secret ballot which began at 6 p.m. (1 p.m. ET).

The Prime Minister “got a real grilling, but overall solid support” as she made her case, a separate pro-May lawmaker told CNN. The MP also confirmed that May promised she would not run again in the next general election.

The UK is scheduled to go to the polls next in 2022, but a snap election could still be called before then.

While chaos swirls in Westminster, British people have been reacting with concern, anger and a healthy dose of apathy to the latest developments in the Conservative Party.

Residents in Prime Minister Theresa May’s constituency of Maidenhead have been giving CNN their views on the political drama.

“I thought Thatcher was bad enough but this one is worse,” Valeria Williams said. “At least Thatcher when she made a decision, she stayed with it, but this one, she changes her mind every day.”

Dinesh Patel was more forgiving. “I think it’s hard, it’s a difficult time for us right now. Hopefully the whole Parliament will support her to go through it,” he said.

And he warned that a general election or second referendum may not ease divisions. “I think it’s a whole hassle to go through the election again. People may change their opinion because now everybody has better information about Brexit but potentially there’s also an option where we may have the same 50-50,” he said.

A more brutal take came from Tony, who declined to give his surname.

“Couldn’t care less,” he said of the outcome of the vote tonight, calling May and Labour Party leader Jeremy Corbyn “idiots.”

“Best possible is that they all jump in the Thames and that’s the last we see of them all, but that’s unlikely to happen,” he added.

Watch their interviews below:

If Theresa May loses tonight's vote, she'll be out -- and the jostling to replace her will begin.

But should that starting gun be fired, who will be leading the pack to take the keys to Downing Street?

Boris Johnson, the former Foreign Secretary and arch-critic of May's Brexit plan, declined to rule out standing against May as recently as Sunday. But while he's popular with grassroots Conservatives, it's unclear whether he'd have the support required among fellow MPs.

Current Home Secretary Sajid Javid has become a strong pro-Brexit voice on Theresa May's frontbench, and has been rising through the party's ranks since he became an MP in 2010. But he voted to remain in the 2016 referendum, which could hurt him with leave-supporting Conservatives frustrated by May's negotiations with the EU.

Hardcore Brexiter and former Brexit Secretary David Davis could be tempted to run for the Conservative leadership for a second time, having been unsuccessful in 2005. Davis is seen by Brexiters as a potential "caretaker" who could either renegotiate a more palatable deal for the pro-Brexit wing of the party or guide the country through a hard Brexit scenario.

Other names to keep an eye on include Michael Gove, who denied leadership intentions just this morning but has also run for the top job before, and Amber Rudd, the former Home Secretary who recently returned to May's cabinet after resigning in the wake of a scandal over the deportation of Windrush Generation immigrants.

Jacob Rees-Mogg will be near the top of many hard Brexiters' wish lists. The staunch conservative is head of the European Research Group (ERG), which for decades has been singularly focused on withdrawing the UK from the EU. And Dominic Raab, who resigned as Brexit Secretary last month in protest at May's deal, could consider a run -- though he'd likely be hurt by comments he made while in the post, when he admitted that he "hadn't quite understood" how much the UK relied on the Dover-Calais crossing for trade.

The post-game planning in the Conservative Party has already begun, it seems.

Conservative MPs loyal to May are saying a win is unequivocally a win and trying to force her to deviate from her Brexit plan -- or even resign -- after the vote would be more indulgence. Party rules state that if May survives tonight's vote, then she cannot be challenged again for 12 months.

So that's that? Not quite.

MPs who have been critical of her leadership are talking up the idea that without a resounding majority among even her own MPs, the PM must acknowledge that she cannot get her Brexit deal through Parliament. At that point, it's change policy or face the possibility of bringing down her own government.

Speculation is a wonderful thing.

The number of Conservative MPs Theresa May needs to win tonight has just gone up by one -- she now needs 159 votes to stay on as leader.

That's because two Conservative MPs who had previously had the whip removed have been reinstated to the party, allowing them to vote in the no confidence motion.

Andrew Griffiths, who was suspended from the party in the summer, confirmed to local newspaper the Derby Telegraph that he would support May after having the whip restored. And Charlie Elphicke, suspended last year, has also been welcomed back into the party. He has not confirmed which way he will vote tonight.

Theresa May could be entering the final hours of her premiership – but the markets aren’t too worried.

The pound strengthened 1.4% against the US dollar on Wednesday after Prime Minister Theresa May picked up support from key members of her party ahead of the no confidence vote.

Stock markets also moved higher in Britain. The benchmark FTSE 100 added 1% and the FTSE 250, which is made up of companies that are more domestically focused, gained 1.7%.

But even if May survives the vote, investors are braced for continued uncertainty.

"The only thing that's certain is that uncertainty will be prolonged into the New Year," Kit Juckes, a strategist at Societe Generale, wrote on Tuesday.

European Union leaders have said they are intensifying planning for a no-deal Brexit in the wake of the Conservative Party’s leadership challenge and uncertainty over when the UK parliament will vote on Theresa May’s agreed deal.

Donald Tusk, President of the European Council, acknowledged the “seriousness” of the no-confidence vote in a letter to EU leaders.

He said May will be able to update the other 27 EU leaders on the situation before 6 p.m. (1 p.m. ET), when Tusk gives a press conference at the council’s summit in Brussels.

But he added: “As time is running out, we will also discuss the state of preparations for a no-deal scenario.”

That was underlined by chief EU negotiator Guy Verhofstadt, who said on Twitter that the bloc will ”intensify our no-deal planning.” He also joined Germany's Angela Merkel in repeating that the agreement currently on the table -- which May pulled the parliamentary vote over yesterday -- cannot be renegotiated.