The World Food Programme (WFP) has been praised by world leaders and humanitarian groups after it was awarded 2020's Nobel Peace Prize.

The UN entity, which provided food to 100 million people last year, praised its staff after taking the honor -- the 101st time that the Nobel Peace Prize has been handed out.

Dan Smith, the director of the Stockholm International Peace Research Institute, told CNN he saw the decision as "positive."

"There's an urgency to the issue at the moment, because after decades of progress, world hunger has started to rise in the last four years, driven primarily by climate change," he said.

The award could also serve as a rebuke to governments that discredit and pull funding from international groups -- a point the Nobel committee did not duck from making.

"Multilateralism seems to have a lack of respect these days," its chair Berit Reiss-Andersen said on Friday.

We're wrapping up our live coverage, but you can read more about the Nobel Committee's decision here.

David Beasley, the executive director of the World Food Programme, reacted with joy and disbelief to the news of his organization's Nobel win.

"I can't believe it!" he told staff from Niamey, Niger.

The World Food Programme praised its staff after winning the Nobel Peace Prize, saying they "put their lives on the line every day."

Tedros Adhanom Ghebreyesus, the director of the World Health Organization which had itself been a frontrunner for the award, praised the decision on Twitter.

"Huge admiration and respect for the life-saving work you do for people in need everywhere," he wrote.

Tunisian actress Hend Sabry, an ambassador for the agency, wrote that the WFP "is mainly a web of wonderful people from all around the world, doing their best to fight hunger."

The World Food Programme warned in April that the planet is facing multiple famines of "biblical proportions" in just a matter of months, with the coronavirus pandemic potentially pushing an additional 130 million people to the brink of starvation.

Famines could take hold in "about three dozen countries" in a worst-case scenario, the executive director of the body said in a stark address. Ten of those countries already have more than 1 million people on the verge of starvation, he said.

WFP Executive Director David Beasley cited conflict, an economic recession, a decline in aid and a collapse in oil prices as factors likely to lead to vast food shortages, and urged swift action to avert disaster.

"While dealing with a Covid-19 pandemic, we are also on the brink of a hunger pandemic," Beasley told the UN's security council. "There is also a real danger that more people could potentially die from the economic impact of Covid-19 than from the virus itself."

The WFP had previously warned that 2020 would be a devastating year for numerous countries ravaged by poverty or war, with 135 million people facing crisis levels of hunger or worse. Their updated projections nearly doubled that number.

The World Food Programme has thanked the Nobel Committee for its selection.

Berit Reiss-Andersen made a pointed rebuke of populism as she answered questions from journalists about the award of the Nobel Peace Prize.

"It is part of populism that it has nationalistic flavor … everybody, every nation, supporting their own interests."

"If you ask anybody within the UN system, they will claim that it is harder these days to get the necessary financial support for the different activities of the different agencies," she said.

Honoring the World Food Programme with the 2020 Peace Prize, the Nobel Committee sent a message to governments around the world, pleading with them not to cut financial contributions to international humanitarian groups.

“This is also a call to the international community not to underfund the World Food Programme,” Berit Reiss-Andersen said,

"This is an obligation, in our mind, of all states of the world to ensure that people are not starving."

The organization has suffered from a drop in contributions in recent years, as countries including the United States lower funding for global organizations.

In 2017, its executive director David Beasley wrote: "This is my message to President Trump and his friends and allies. Proposed massive cuts to food assistance would do long-term harm to our national security interests."

"Multilateralism seems to have a lack of respect these days," Reiss-Andersen said on Friday. "The Nobel Committee definitely wants to emphasise this aspect."

Berit Reiss-Andersen, the chair of the Norwegian Nobel committee, noted the impact of the coronavirus pandemic on global food supplies as she revealed the winner of the Nobel Peace Prize.

"The coronavirus pandemic has contributed to a strong upsurge in the number of victims of hunger in the world," she said.

"In the face of the pandemic, the World Food Programme has demonstrated an impressive ability to intensify its efforts."

"As the organization itself has stated: until the day we have a vaccine, food is the best vaccine against chaos," Reiss-Andersen said. 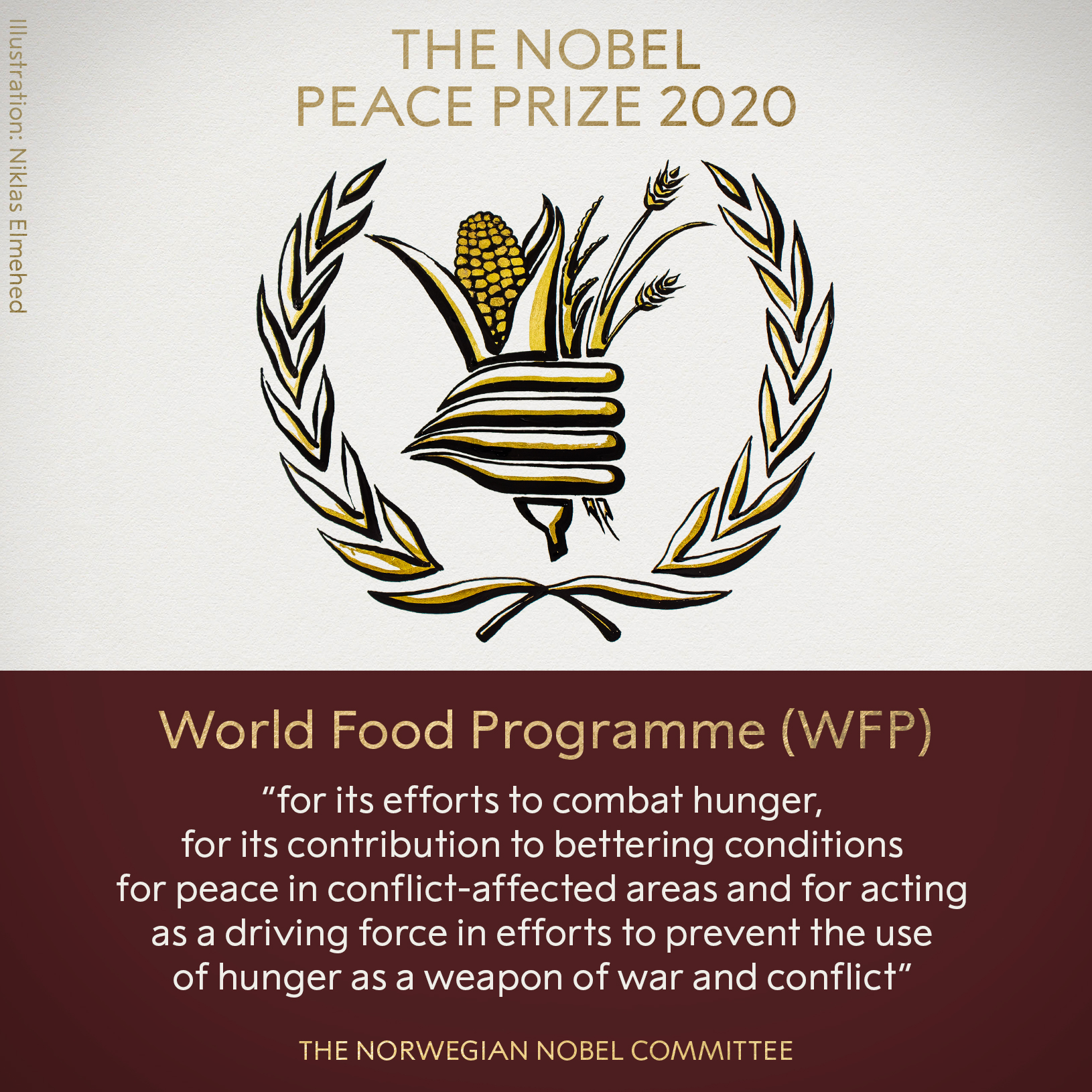 The initiative was created in 1961, and today provides food to over 90 million people a year.

It was honored "for its efforts to combat hunger, for its contribution to bettering conditions for peace in conflict-affected areas and for acting as a driving force in efforts to prevent the use of hunger as a weapon of war and conflict."