The Queen has emerged onto the Buckingham Palace balcony once more. This time she's joined by more family members for an appearance in front of thousands of roaring well-wishers who have been allowed to stream down The Mall towards the palace.

Alongside the Queen are three of her children, Charles, Edward and Anne, Prince William and Catherine and their children, as well as a number of other relatives.

The Sussexes, who were at the ceremony at Horse Guards Parade earlier but not seen, are not joining the royals on the balcony as the Queen decided last month that only royals carrying out official duties��will be included.

Australia will host a series of celebrations this week to mark the Queen’s Platinum Jubilee.

More than 80 iconic landmarks and buildings across the country will be illuminated in royal purple, including the Sydney Harbour Bridge and Government House.

Canberra will hold an official event to light up the Australian Platinum Jubilee Beacon on the shore of the Australian capital’s Lake Burley Griffin.

Over in Sydney, a seven-minute light show will be displayed on Thursday night to recognize the seven decades of the Queen’s reign.

Aircraft from the Australian Air Force's No.100 Squadron and Central Flying School will also conduct a flypast and aerial display over Aspen Island in Canberra.

Australia retains the British monarch as its head of state, though the monarchy has very little actual power in Australia – Queen Elizabeth’s role is almost entirely symbolic.

US Secretary of State Antony Blinken said on Thursday that the Queen's "unprecedented 70 years of service to the United Kingdom are an inspiration to Americans."

"Through our special relationship, common history, and shared values, we work together to uphold democracy, human rights, and the rule of law worldwide. Our countries collaborate closely on virtually every significant challenge and opportunity the world over precisely because we have no closer partner," Blinken said in a press statement.

Blinken called the jubilee a "historic and joyous occasion," and sent his "heartfelt wishes for peace, prosperity, and good health to Her Majesty and all the people across the United Kingdom."

"On behalf of the United States of America, I congratulate Her Majesty Queen Elizabeth II and the people of the United Kingdom on the occasion of Her Majesty’s Platinum Jubilee and official birthday," he said.

Former US President Barack Obama has recorded a heartfelt video message in which he said the Queen reminded him of his grandmother.

Wearing a suit and tie, Obama recalled his personal memories of meeting the Queen. The clip, broadcast on the BBC, lasts for one minute and 39 seconds.

He said: "When you are President of the United States you meet a lot of remarkable people and you try, under all circumstances, to maintain your composure. But that’s harder than you think when you are visiting Her Majesty.

"Before I took office Michelle and I hadn’t been to too many palaces so we weren’t sure what to expect on our first trip to Buckingham. But we shouldn't have been worried.

"Her Majesty put us at ease with her grace and generosity, so much so that I walked away thinking she actually reminded me a little bit of my grandmother and in the years since I would like to think Her Majesty and I have formed a special relationship of our own.

"Certainly I can say that getting to know her was one of the great privileges of my years in office and I learned so much from seeing the example she set for all of us who had the privilege to serve.

"Your Majesty, it would be an understatement to say the world has changed a bit in the seven decades since you first came to power but your character never has.

"Your steadfast stewardship of one of our most important democracies has made the world safer and more prosperous through war and peace, times of adversity and times of prosperity.

"Your life has been a gift, not just to the United Kingdom, but to the world and it is with gratitude for your leadership and the kindness that you’ve shown me and my family that I say may the light of your crown continue to reign supreme."

The Queen has appeared on the balcony of Buckingham Palace to receive a salute as soldiers and officers return from Horse Guards Parade following the conclusion of the Trooping the Colour ceremony.

Dressed in an Angela Kelly ensemble and matching hat, she is watching the troops march past with a walking stick in hand. She is accompanied by her cousin, the Duke of Kent.

The monarch has opted to wear a dusky dove blue Charmelaine wool dress embellished with pearl and diamante trim around the neckline and cascading down the front of the coat. It's the same outfit she was photographed in for a new official portrait released by Buckingham Palace on Wednesday.

She is also wearing the Guards’ Badge.

The Duke of Kent is Colonel of The Scots Guards and is wearing a Scots Guards Tunic and Forage Cap with Garter Sash, adorned with numerous medals and decorations.

The ceremony at Horse Guards Parade is now drawing to a close as Prince Charles takes the final salute on behalf of his mother, the Queen. The troops will now return to Buckingham Palace.

Several senior royals are now making their way back up The Mall in carriages, waving to the crowds on this gloriously sunny day here in London.

It has taken "months of training and centuries of tradition" to pull off the "major military spectacle," according to the UK Ministry of Defence.

In a tweet posted during the Trooping the Colour ceremony, the government department posted a series of photos and revealed that the event has involved 1,500 soldiers and officers, 400 musicians, 250 horses and 70 aircraft.

Queen Elizabeth II continues to turn heads and make headlines, with her bright, bold wardrobe. And royal-watchers are hopeful her striking style will help them catch a glimpse of her on Thursday.

"I haven't seen my family since the pandemic and the jubilee coincided with my visit so I thought, 'why not?'

"I just want to see the Queen, I mean that's why I'm here today. She has amazing outfits and you can always spot her."

According to her daughter-in-law Sophie, Countess of Wessex, Britain’s long-serving monarch's penchant for colorful outfits is a sign of respect for well-wishers who take the time out to see her in person.

Angela Kelly -- the Queen's sartorial adviser for almost three decades and a close confidante -- has often been credited for helping to develop her signature style.

Read more on the strategy behind the Queen's look here: 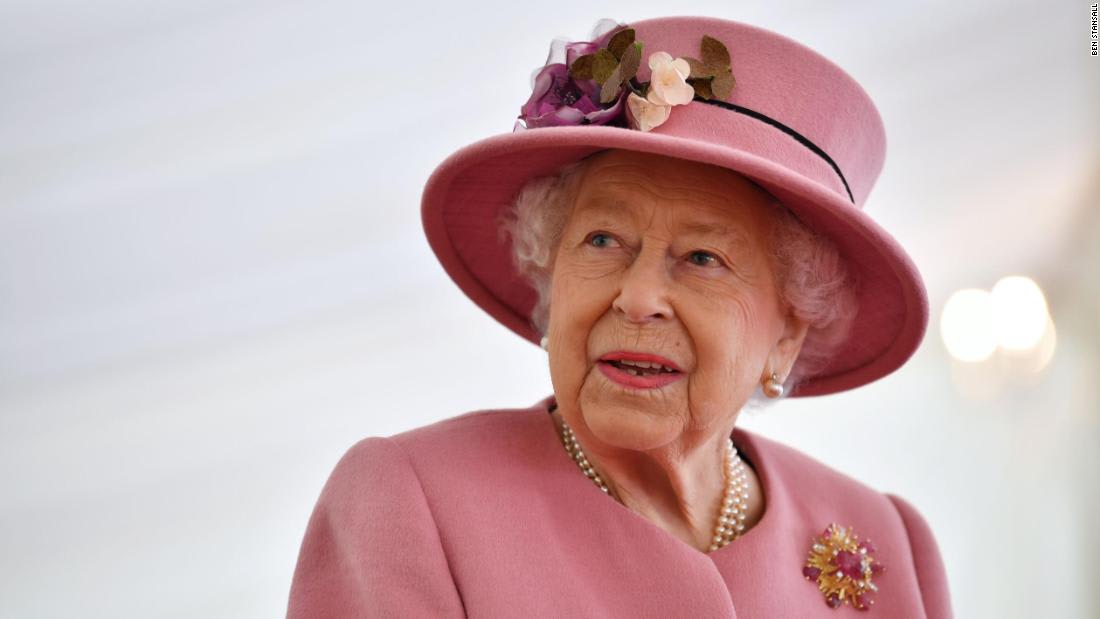 While the military spectacle that is the Trooping the Colour ceremony continues over at Horse Guards Parade, things are happening down the road at Buckingham Palace too.

The Royal Standard flag has been raised over the palace indicating the Queen is now in residence. We are expecting her to appear on the balcony later to take a salute when the Household Cavalry Mounted Regiment and the Guards return. She'll be accompanied by her cousin, the Duke of Kent.

And then of course there will be the moment everyone is waiting for: The appearance of the royal family on the balcony during the RAF flypast.