Thank you for joining us as celebrations for the Queen's Platinum Jubilee got underway in London. Our live coverage has now ended but head here to read our full story on the first day's festivities.

Fabuleu de Maucour, a 7-year-old grey gelding, was gifted with a ceremonial saddle and a cavalry sabre.

In a statement, the French Embassy said the "shapeliness and elegance of the horse, a seven year-old standard-bearer for the Garde Républicaine, epitomizes French horse-breeding."

Fabuleu de Maucour was part of Macron’s escort on the Champs-Elysées during the VE Day commemorations last month.

The horse was accepted on behalf of the Queen by Lord Rupert de Mauley, the Master of the Horse, inside Windsor Castle on Wednesday.

Earlier in the day, Macron sent the Queen a video message to congratulate her.

The Queen's birthday parade may have wrapped up but the first day of Platinum Jubilee celebrations is not over just yet.

Tonight, more than 3,000 beacons will be set alight across the UK, the Channel Islands, the Isle of Man and in Overseas Territories. Beacons will also be lit in the capital cities of Commonwealth countries.

The lighting of beacons is a long running royal tradition used to mark jubilees, weddings and coronations.

The Queen will lead the lighting of the principal Platinum Jubilee beacon -- a towering sculpture called the "Tree of Trees" erected outside Buckingham Palace -- on Thursday evening remotely from Windsor Castle. Prince William will represent the monarch in central London.

"Placing the ‘Tree of Trees’ at the heart of the beacon lighting reflects the Royal Family's long history of championing environmental causes and will pay a fitting tribute to Her Majesty’s 70 years of service to the nation," Buckingham Palace said in a press release.

At the Windsor ceremony, the Queen will first be presented with the "Commonwealth Globe of Nations," a globe set with platinum, diamond, gold and silver elements and featuring stones collected from the United Kingdom's highest mountains.

After she symbolically touches the globe, it will light up and trigger the illumination of Windsor Castle's famed Round Tower and Quadrangle lawn, and then the "Tree of Trees" more than 20 miles away.

Back in London, once the beacon is lit, William will hear the London Community Gospel Choir and Gregory Porter sing the official Beacons song "A Life Lived with Grace."

The sculpture has been divisive on social media since its unveiling last week. One user wrote that the design was "absolutely beautiful," while another likened it to resembling a "cell phone tower." 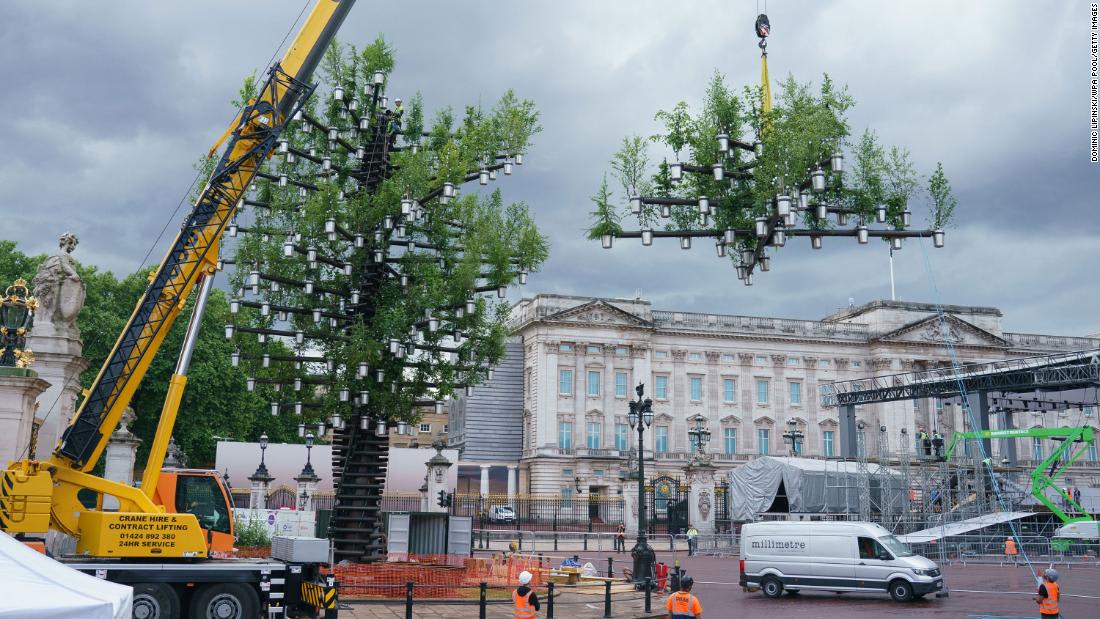 'Massively over-engineered:' A tree sculpture for the Queen's Jubilee celebrations gets mixed reviews

As she celebrates 70 years on the throne, here's a look back at her reign.

Prince Andrew, the Duke of York, will not join family members for a Platinum Jubilee thanksgiving service at St Paul's Cathedral in London on Friday after testing positive for coronavirus, a source has told CNN.

"After undertaking a routine test The Duke has tested positive for Covid and with regret will no longer be attending tomorrow’s service," the royal source said.

He has seen his mother in the last few days but has been undertaking regular testing and has not seen her since he tested positive, the source added.

Prince Andrew was stripped of royal duties and his HRH title in January in the wake of his civil sexual assault lawsuit in the US. He has since settled that suit out of court, but his lengthy association with convicted pedophile Jeffrey Epstein has severely tarnished his reputation and his involvement in the weekend had posed awkward questions for organizers.

Any royal fan knows the importance of dressing for the occasion, and those who gathered along The Mall certainly didn't disappoint on Thursday.

Whether it's getting creative with the Union Jack or being inspired by the Queen's troops, CNN met some of those who brought their royal fashion A-game.

Grace Gothard, from Surrey, southern England, said she made her own dress for the celebrations.

"I came for the Queen because she hasn't been seen much recently," the 60-year-old said.

"I made this dress. I made my dresses for Kate's wedding and for Meghan's wedding so I had to do the same today."

Moira Smith, 81, from the Lake District, Cumbria, and Sally Conway, 57, who lives in London, said they also attended celebrations for the Golden and Diamond Jubilees, as well as royal weddings.

The pair, kitted out in several Union Jack flags, said they enjoy making friends with new people who are enjoying the celebrations. Conway added that it's her birthday today -- even more reason to celebrate.

Meanwhile, 6-year-old Edward Lyon was dressed like a member of the Queen's troops, the Household Division.

He and his mother, Lucy Lyon, 33, traveled from Lincolnshire, in the East Midlands, for their first royal celebration.

"I've had lots of fun. My favorite part was seeing the soldiers," Edward, who wants to be a soldier when he grows up, said.

She’s been photographed, painted and graffitied. She’s been struck on coins, cast in iron, silk-screened onto T-shirts and fired onto plates. There’s even a Barbie doll in her likeness.

At 96 years old, the longest-serving monarch in Britain’s history celebrates seven decades on the throne this year.

Queen Elizabeth II’s reign has seen the proliferation of color photography, the commercialization of television and the pervasiveness of the internet on screens big and small.

Over this time, her image has been widely circulated the world over, making the Queen one of the most recognizable faces in history.

As the UK celebrates a four-day holiday weekend for the Queen’s Platinum Jubilee, CNN explores some of the official and unofficial, classic and controversial images that turned Elizabeth II into the cultural icon she is today. 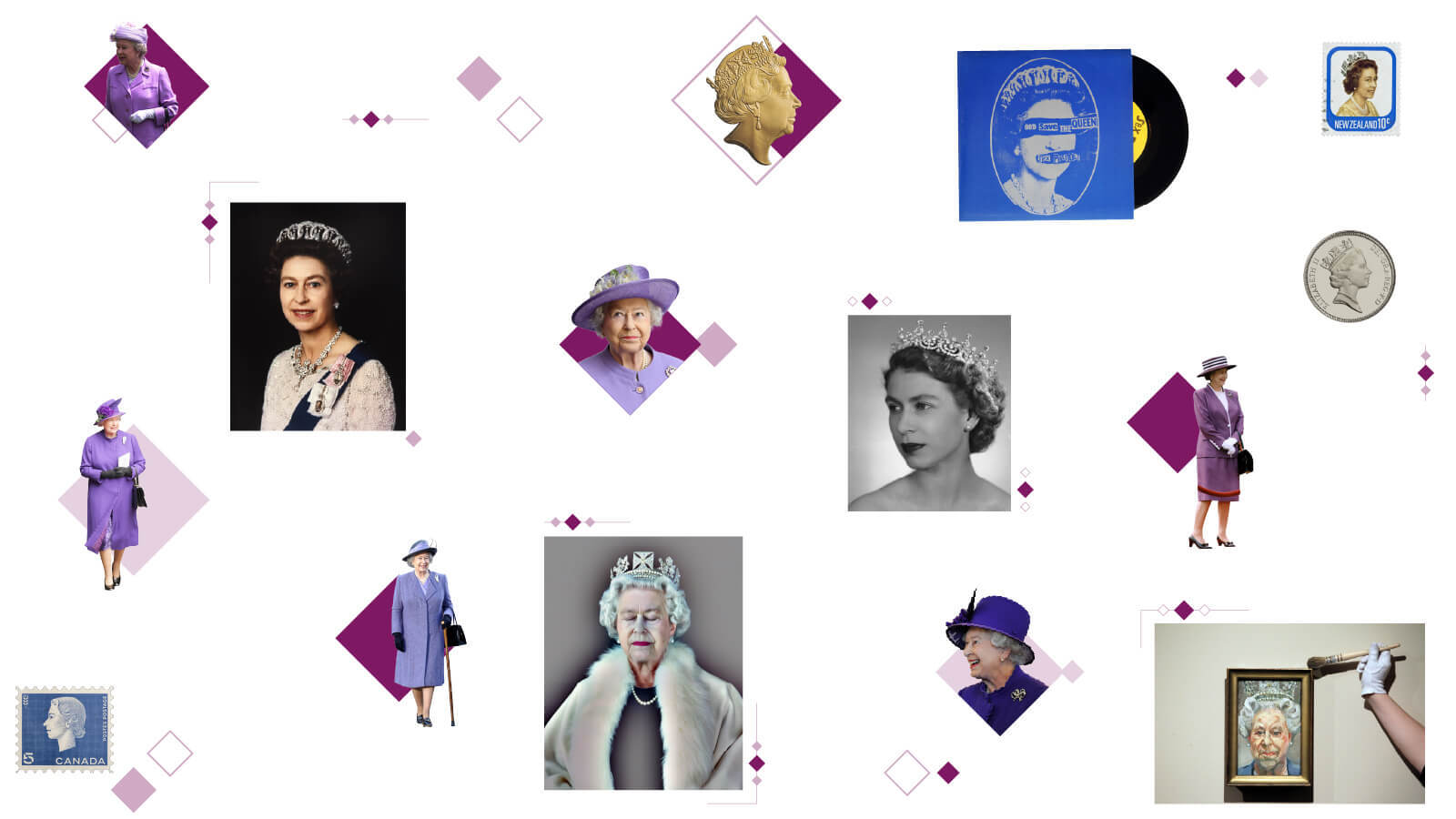 Queen Elizabeth: How 70 years of portraits have made her an icon

Thousands of flag-waving fans descended on London as the four-day festivities marking the Queen's 70th anniversary on the British throne started Thursday.

Royal-watchers flooded The Mall in the hopes of catching a glimpse of the royals as they made their way to Horse Guards Parade for the annual Trooping the Colour ceremony.

Those unable to nab a spot along the procession route gathered at several central London locations to watch the action on big screens.

Not everyone was enjoying the big occasion, as the latest pictures from the palace balcony show.

The overbearing noise of the 70 aircraft passing over Buckingham Palace proved too much for the young prince, who covered his ears and appeared to be letting out a scream.

The youngest child of the Duke and Duchess of Cambridge, who is 4 years old, was also seen looking fed up and pulling faces during the six-minute flypast staged by the Royal Air Force (RAF).

Nevertheless, his great-grandmother, mother, grandfather and sister do not appear to be remotely bothered by Prince Louis' refusal to maintain protocol, as they smile and chat to each other.