Russian voters have overwhelmingly backed a ploy by President Vladimir Putin to rule until 2036 in a referendum with little doubt about the outcome, according to preliminary results.

Russia’s Central Election Commission said that 73% of citizens had voted in support of constitutional changes, after processing 25% of votes as polls closed on Wednesday night.

The changes to effectively reset the clock on Putin's term limits, allowing him to seek two more six-year terms when his presidency ends in 2024.

At least two dozen people have been detained in protests against the referendum, the monitoring group OVD-Info said Wednesday.

According to the group, 14 people have been detained in Moscow, four in St. Petersburg, two in Nizhny Novgorod and one each in the cities of Novosibirsk, Blagoveshchensk, Khanty-Mansiysk and Penza.

A couple of hundred people have gathered at Pushkin Square -- a favorite rallying point in Moscow -- for a demonstration against the constitutional amendments.

Protesters held signs that read “Putin forever?” referring to the amendment that could extend President Vladimir Putin’s rule until 2036.

Some chanted “Russia will be free” and “Best amendment -- Putin’s resignation.” One demonstrator, Andrey, who did not disclose his last name, said he came to the square to protest the scant economic support provided by the state to people like him, who lost their jobs during the coronavirus pandemic.

“What prevented them to do all these things -- health care, good education, decent social benefits -- in the past 20 years? Why do we need a new constitution for that?” he said.

Marina Litvinovich, member of a movement called NYET (No), told CNN their organizations’ exit polls in Moscow and St. Petersburg showed that about half of voters are against the proposed changes.

“We believe that [the official numbers] are in many ways a falsification and there is an administrative resource involved to force people to vote but you have to look past official results ... as the authorities won’t be able to be blind to the people who voted no.”

Police surrounded the square with patrol cars and buses but so far there have been no detentions. A woman wearing police uniform was handing out medical masks to journalists and protesters.

Putin's popularity has taken a hit during coronavirus, but his approval ratings are still high.

Russia has been one of the countries hardest hit by the coronavirus pandemic -- ranking behind only the United States and Brazil in Covid-19 case numbers -- and the government's response has received heavy criticism at home and abroad.

The referendum vote, originally scheduled for April 22, was delayed amid coronavirus concerns. Election officials said early voting would be held to aid social distancing: Russia is still reporting around 7,000 new cases each day, according to official statistics.

Russian doctors have described critical shortages of equipment, a situation that hospital administrators and local governments deny. Observers have questioned whether Russia is under-reporting mortality figures from the deadly disease. But Kremlin spokesman Dmitry Peskov -- who has returned to work after being hospitalized with Covid-19 in May -- defended his country's handling of the pandemic.

In an exclusive interview with CNN last month, Peskov said the virus had not posed a domestic political crisis for Russian President Vladimir Putin, and that Russia's healthcare system had saved lives despite coming under major strain.

The pandemic dented usually sky-high ratings for Putin. Independent pollster Levada-Center noted that the Russian President's ratings fell below 60% in April and May, levels not seen since he assumed office two decades ago -- a drop that Peskov dismissed.

"We are concerned about this pandemic, and we are concerned about the impact of this pandemic on the country's economy," Peskov said on Tuesday. "But President Putin has stated numerous times that he doesn't care about his personal ratings, that in politics if you are real statesman, you should not think about your ratings -- because if you think about your ratings, you won't be able to take responsible decisions." 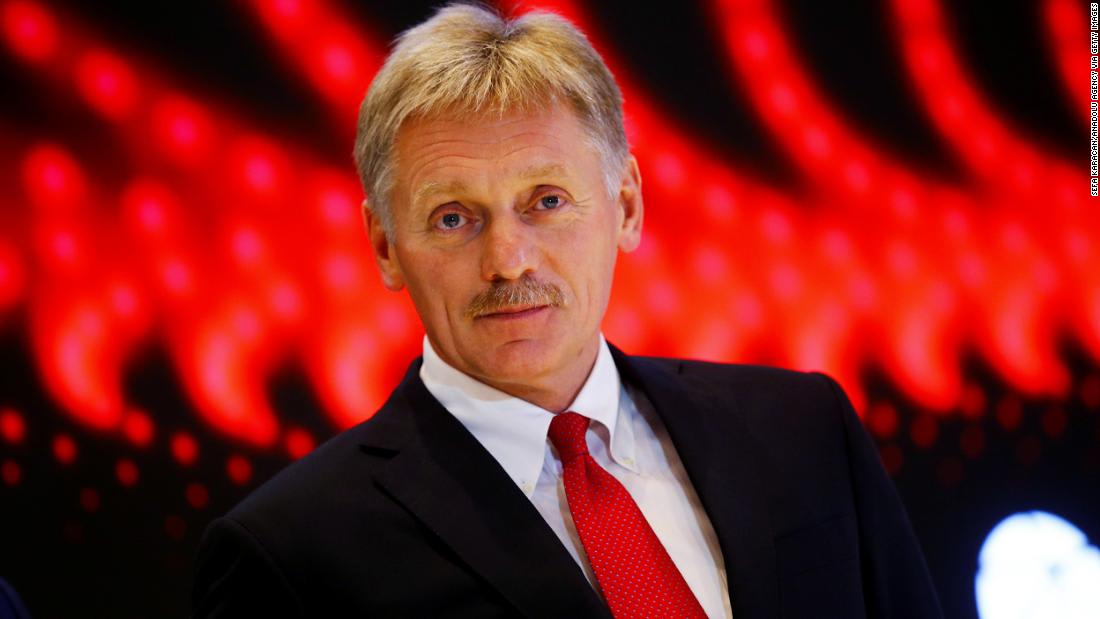 Russian President Vladimir Putin cast his ballot at a voting station inside the Russian Academy of Sciences in Moscow, where he traditionally votes during all elections and referendums.

Local media reported that the surroundings were cleaned up and renovated a few days ahead of the planned appearance. The organizers there took extra health precautions by placing a sticky mat at the entrance, which they claimed could “remove coronavirus from shoes.”

Everyone entering the building must also sanitize their hands and put on a mask -- except Putin, who did not wear one.

A raft of amendments designed to appeal to conservative voters and "family values" are also on Wednesday's ballot, including a ban on gay marriage.

The proposed change on marriage falls in line with Russia's previous discriminatory policies towards the LGBTQ community, which includes the so-called "gay propaganda" law that virtually bans any public discussion of LGBTQ issues.

The controversial amendment defines marriage as a "union between a man and a woman." Russian law does not permit same-sex marriages or partnerships, and adoption laws generally bar same-sex couples from adopting.

Here's the amendment that we’re talking about:

For both the Russian Federation and subjects of the Russian Federation [the values] are: ... protection of the family, motherhood, fatherhood and childhood; defense of the institution of marriage as a union of a man and a woman; the creation of conditions for a decent upbringing of children in the family, as well as for the responsibilities of adult children to care for parents ... "

And this is the language from the official booklet on amendments to the constitution:

Family is the main value of the absolute majority of Russians. Children are a state priority policy for the country. Amendments to the Constitution will ensure conditions for harmonious development child help to instill a young citizen’s love for the motherland and respect for older generations.
Amendments support traditional family values: marriage as a union of man and woman, respect for children to elders, trust and care of all generations of a family for each other.

A group of activists laid down in Red Square in the form of the numbers 2036 in a protest over the nationwide referendum that could see President Vladimir Putin's rule extended until that date, the independent news channel TV Rain reported.

Video posted by TV Rain correspondent Maria Borzunova showed the activists lying down on the cobblestones in front of Lenin's Tomb.

TV Rain reported that the activists -- who included Moscow municipal deputy Lucy Shteyn -- were detained and subsequently released without charge.

That's difficult to predict, but members of the country's small and embattled opposition have already raised questions about tampering and irregularities in the referendum. Polls have been open for early voting since last week, a measure cast by election officials as a coronavirus precaution to allow social distancing.

Some Russians have taken to social media to show their preference, posting NYET (no) on their profiles. Residents of Moscow and other large cities glued anti-Putin stickers next to pro-amendments posters. Others have taken note of a curious fact: Copies of the constitution recently went on sale in bookstores, with the amendments already included, something widely commented on in social media. That suggested to many Russians that the fix was in.

Even before the vote kicked off last week, independent outlets and NGOs posted dozens of screenshots and audio messages suggesting forced voting by employers of big corporations and state-financed organizations.

"In the past few days we have also seen a large numbers of ballot stuffing, so it feels like at some stage it was clear to [the organizers] that the administrative resources to mobilize controlled electorate are running out, they may also be voting in a slightly different way compared to a desired one and they've resorted to good old ways of rigging," Stanislav Andreychuk, co-charman of the non-governmental group Golos, told CNN.

According to Andreychuk, this plebiscite is way less regulated than previous elections his organization monitored: Voting booths set up on park benches violate the secrecy of voting, the usual restrictions on releasing exit polls are not enforced and unregulated campaigning -- aided by raffles promising apartments to lure voters to stations -- muddy the voter's right to freely exercise their will.

Widespread allegations of voting fraud that followed 2011 parliamentary elections led to a wave of pro-democracy protests that deeply worried the Kremlin, but Wednesday's referendum results appear to be a foregone conclusion.

Russia's Central Election Commission (CEC) on Wednesday released a preliminary tally of results in a nationwide referendum on constitutional reform, saying 73% of the citizens who voted support amendments.

In a departure from practice in presidential elections, the CEC released the statement on Twitter at around 3:00 pm Moscow time, five hours before polls close in the capital. The statement gave no more specifics about where those votes had been counted; polls at that point had already closed in Russia's Far East.

The Russian government opened early voting last week in what was described as a measure to encourage social distancing amid coronavirus, but critics have said the government has drawn out the vote and declared Wednesday a national holiday to encourage voter turnout.

In a statement Wednesday, CEC head Ella Pamfilova defended the process, saying, "For the entire voting period, serious violations that would have required Central Election Commission proceedings were not found."

The constitutional amendments will pave the way for Russian President Vladimir Putin to remain in power until 2036.