“The situation ... continues to be very worrying,” Grossi said. “The shelling continues, so indeed, we are still facing a very grave danger.”

When Amanpour asked if there was an imminent threat — including of a possible nuclear meltdown — Grossi said he doubted that for now, but ongoing shelling posed an ongoing threat nonetheless.

“The mere fact there is continuity of attacks and shelling, deliberate or not, wittingly or unwittingly, people are hitting a nuclear power plant, the largest in Europe. So I must say that the danger continues,” he said.

Amanpour asked Grossi if the IAEA was able to determine who was behind the shelling, as both the Ukrainians and the Russians have blamed each other.

“I cannot make that determination. We do not have the means to do that. As you know, you would need to be looking or monitoring the military operation in the region and all its vastness, which is not only beyond the mandate of the IAEA, but would require enormous capabilities,” Grossi said.

He said the IAEA’s purview and responsibility is to “look at the safety and security of the facility to determine what is really going on. This is why my visit there, the inspection there, and the fact that now I have people who have stayed, so the IAEA is staying at the plant, was essential, indispensable.”

Russia is in the process of purchasing millions of rockets and artillery shells from North Korea for use on the battlefield in Ukraine, a US official tells CNN.

The purchase indicates that the Russian military continues to suffer from severe supply shortages in Ukraine, due in part to export controls and sanctions, according to the official.

The US expects Russia could try to buy more military equipment from North Korea going forward, the official added.

The New York Times first reported on the purchase. The two countries had formed relations through the Korean War of the 1950s, with the former Soviet Union having been a major benefactor to North Korea, financially propping the regime up. North Korea has blamed the US and the West for the war in Ukraine.

News of Moscow buying weaponry from North Korea follows a recent US assessment that Russia now possesses weapons-capable drones from Iran also likely for use in the war in Ukraine.

The US believes that Moscow officially purchased the Mohajer-6 and Shahed-series drones — the Shahed-129 and Shahed-191 — from Iran and transferred to Russia for use in the war in Ukraine. The drones are capable of carrying precision guided munitions and can be used for surveillance.

Russia has been looking to hamper Ukrainian military's use of recently Western-supplied long-range precision artillery and rocket systems, including the High Mobility Artillery Rocket Systems (HIMARS), on the battlefield. With the HIMARS, Ukraine has been able to precisely target and hit Russian command posts, logistical hubs and ammunition dumps well beyond the front lines.

During a briefing at the Pentagon on Tuesday, Pentagon Press Secretary Brig. Gen. Pat Ryder told reporters that Russia has approached North Korea to “request ammunition.”

The request from Russia to North Korea is “indicative of the situation Russia finds itself in,” Ryder said.

“It does demonstrate and is indicative of the situation Russia finds itself in in terms of logistics and sustainment capabilities as it relates to Ukraine,” Ryder said. “We assess that things are not going well on that front for Russia, so the fact that they’re reaching out to North Korea is a sign that they’re having some challenges on the sustainment front.”

The Ukrainian military repelled several Russian offensives in the eastern region of Donetsk, the army’s general staff said in a situational update on Tuesday.

“Units of the Defense Forces of Ukraine hold their positions and prevent the enemy from advancing deeper into the territory of Ukraine,” the General Staff said. “Our military successfully repelled enemy attacks in the areas of Dolyna, Soledar, Novobakhmutivka, Kodema, Zaitseve, Avdiivka, Mariinka, and Lyubomirivka settlements of Donetsk region.”

The Ukrainian military also claimed the destruction of Russian targets in the Donetsk region but also along the southern front.

The US Defense Department is seeing Ukrainian offensive forces in the Kherson region “continue to make some forward movement,” including retaking villages, a Pentagon official said.

“What we’ve seen in the Kherson region first is some continued offensive operations by the Ukrainians,” said Pentagon press secretary Air Force Brig. Gen. Pat Ryder at a briefing with reporters. “They continue to make some forward movement. We are aware that they have retaken some villages.”

Ryder also said that the US has seen “some offensive Russian activity … near Bakhmut.”

The International Atomic Energy Agency (IAEA) said the team it sent to the Zaporizhzhia nuclear power plant in Ukraine saw a unit of Russia's nuclear agency at the facility.

The IAEA inspectors “observe[d] the presence of an expert group from Rosenergoatom,” which is a unit of Russian nuclear agency Rosatom, according to a report published on Tuesday.

“It was explained to the team by the Ukrainian plant staff and managers that the role of this expert group was to provide advice on nuclear safety, security, and operations to the management of the ZNPP,” the IAEA said.

But “the presence of Rosatom senior technical staff could lead to interference with the normal lines of operational command or authority and create potential frictions when it comes to decision-making,” according to the United Nations' nuclear watchdog.

“Energoatom operating teams at the plant have been able to rotate in three shifts per day, but the situation has had a negative impact on staff,” it added.

According to the IAEA, Ukrainian authorities reported that the Rosatom team arrived on April 29.

“These specialists requested daily reports from plant management about “confidential issues” on the functioning of the NPP, covering aspects related to administration and management, maintenance and repair activities, security and access control, and management of nuclear fuel, spent fuel and radioactive waste,” according to the report. 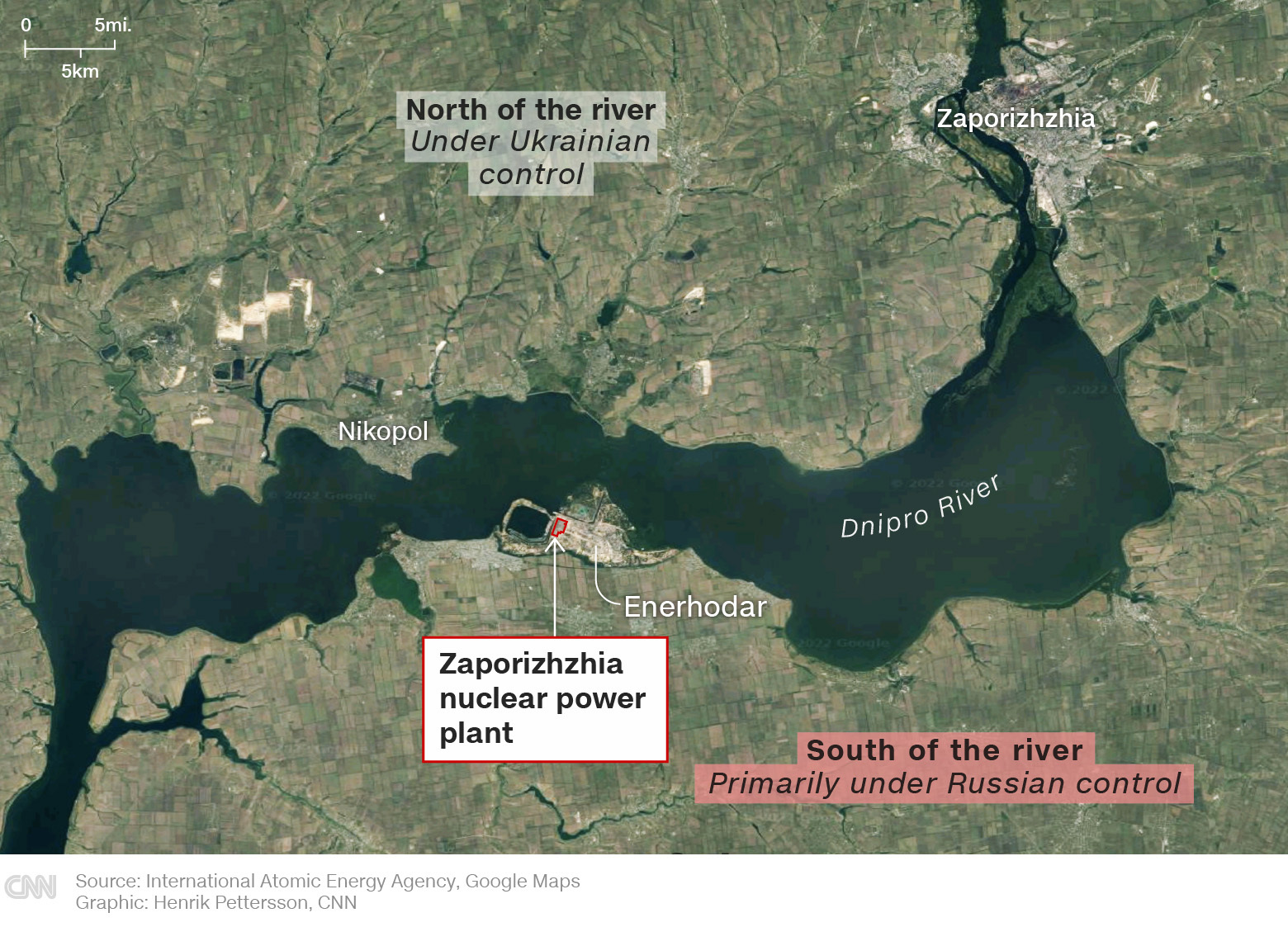 The International Atomic Energy Agency saw Russian military equipment and personnel inside the Zaporizhzhia nuclear power plant during its visit of the facility, Director General Rafael Grossi said in a report published on Tuesday.

“The team observed the presence of Russian military personnel, vehicles and equipment at various places at the ZNPP, including several military trucks on the ground floor of the Unit 1 and Unit 2 turbine halls and military vehicles stationed under the overpass connecting the reactor units,” according to the report.

The IAEA said the presence of military personnel and equipment creates “very challenging circumstances” for staff trying to maintain normal operations at the plant.

CNN last month reported on video that showed Russian military vehicles inside a turbine hall connected to a nuclear reactor. 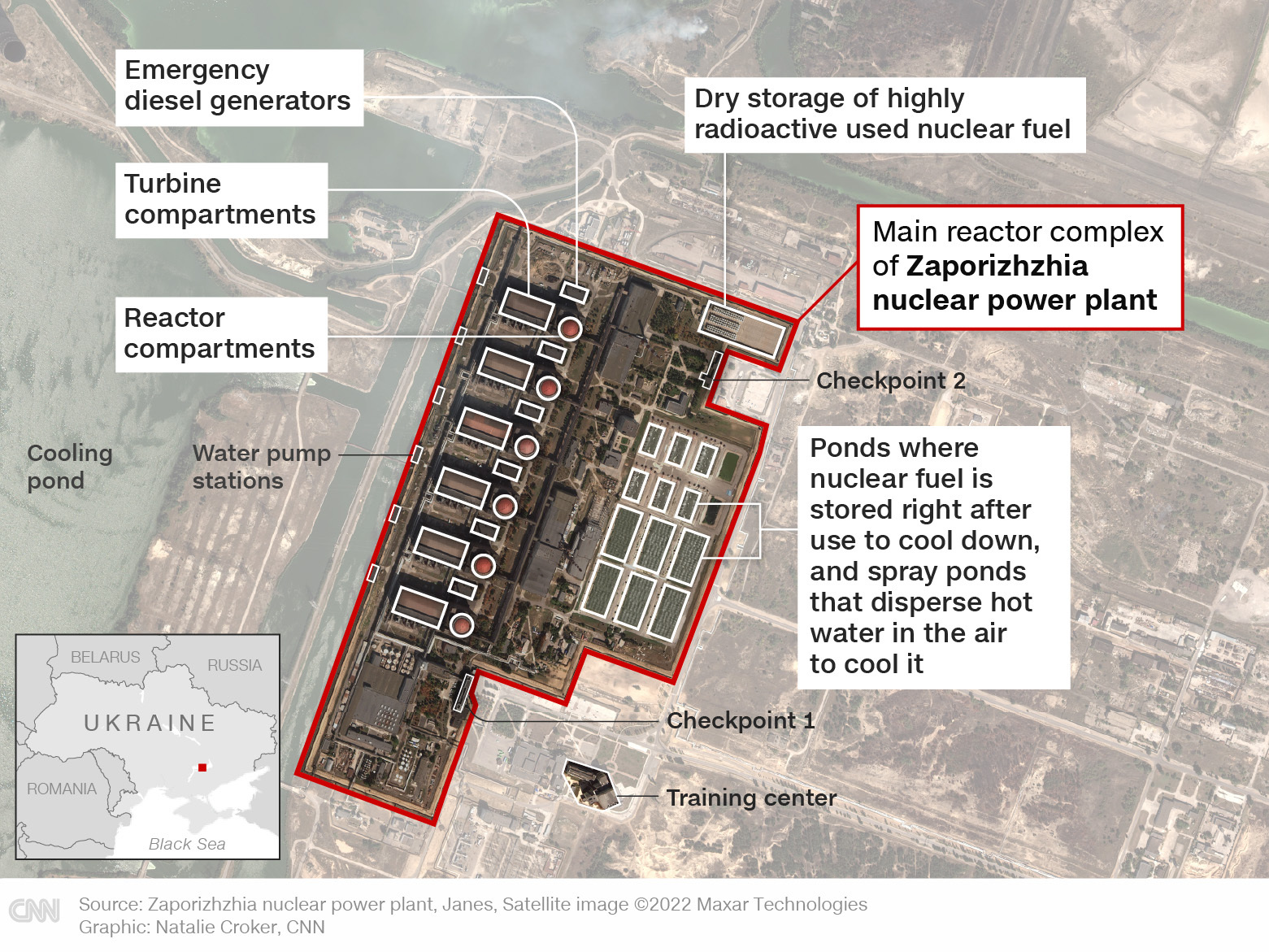 The European Commission on Tuesday unveiled a proposal to suspend the visa facilitation agreement between the European Union and Russia, which would make it more expensive and harder for Russians to travel to EU member states.

European Home Affairs Commissioner Ylva Johansson announced the proposal in a news conference in Brussels, saying there is "no basis for a privileged relationship between Russia" and the European Union following Russia's invasion of Ukraine.

"The proposal to suspend the Visa Facilitation Agreement will put an end to all facilitations for Russian citizens applying for a short-stay visa to the Schengen area," a European Commission news release said Tuesday.

Johansson stressed that the proposal will ensure that "Russia citizens will no longer enjoy privileged access to the EU."

Russians trying to enter the EU for tourism and leisure purposes will face a "lengthier" and "more expensive" process, the commissioner said. There will also be more restrictions for multiple entry visas, Johansson added.

As part of this, the visa fee will increase from 35 euros ($34.66) to 80 euros ($79.23) while the deadline for a decision from consulates will increase from 10 days to 15 days. Visa applicants will also have to submit a longer list of documentary evidence when applying for a visa, according to the press release.

Despite the suspension, the EU will remain "open to certain categories of Russian visa applicants travelling for essential purposes, including notably family members of EU citizens, journalists, dissidents and civil society representatives," according to the news release.

What comes next?: The commission must now wait for the European Council to consider the proposal to scrap the visa agreement in its entirety, the press release said. If approved by the European Council, the suspension will come into force on the second day after its publication in the Official Journal of the European Union.

The bloc announced in the press release that it is also proposing a "common EU approach for the non-recognition of Russian passports issued in occupied foreign regions, as Russia currently extends the practice of issuing ordinary Russian passports to more non-government-controlled areas of Ukraine, in particular the Kherson and Zaporizhzhia regions."

The EU stressed that its visa facilitation agreements "are based on mutual trust and respect of common values between the EU and the given country."

"Russia's invasion of Ukraine is incompatible with a trustful relationship and runs counter to the spirit of partnership on which Visa Facilitation Agreements are based," the bloc added.

The International Atomic Energy Agency (IAEA) says it remains “gravely concerned” about the situation at the Zaporizhzhia Nuclear Power Plant (NPP) in Ukraine and says there is an “urgent need” for measures to prevent a nuclear accident, namely the establishment of a nuclear safety and protection zone around the Russian-occupied site, Director General Rafael Grossi said in a report following a visit to the site.

“The IAEA is still gravely concerned about the situation at the ZNPP – this hasn’t changed,” the report reads. “The Seven Pillars have all been compromised at the site.”

The agency emphasized the urgent need for interim measures "to prevent a nuclear accident arising from physical damage caused by military means."

To achieve this, the IAEA called for the establishment of "a nuclear safety and security protection zone.”

“The IAEA is ready to start immediately the consultations leading to the urgent establishment of such a nuclear safety and security protection zone at the ZNPP,” the report said.

The agency says its team saw first-hand the damage shelling has caused to the facility and “noted with concern that the shelling could have impacted safety related structures, systems and components, and could have caused safety significant impacts, loss of lives and personnel injuries.”

In addition to the danger of the continued fighting around the facility, the agency says staff at Zaporizhzhia and other nuclear plants in Ukraine “have continued to show endurance and resilience in keeping the sites running in a safe and secure way amid the conflict.”

The International Atomic Energy Agency has released a report about the nuclear safety and security situation in Ukraine, including its findings from the mission to the Russian-occupied Zaporizhzhia nuclear power plant (ZNPP).

A team of the UN agency's inspectors visited the plant last week.

In its report, the IAEA said the team witnessed shelling during its visit and called on both sides to cease the hostilities in the area.

"While the ongoing shelling has not yet triggered a nuclear emergency, it continues to represent a constant threat to nuclear safety and security with potential impact on critical safety functions that may lead to radiological consequences with great safety significance," the report notes about the situation at the plant.

It listed some damages that the inspectors observed during their mission to the plant.

The UN agency's report recommended that shelling on site and its vicinity "should be stopped immediately to avoid any further damages to the plant and associated facilities, for the safety of the operating staff and to maintain the physical integrity to support safe and secure operation. This requires agreement by all relevant parties to the establishment of a nuclear safety and security protection zone around the ZNPP."