Two people have been killed in bombardments in the eastern town of Popasna, said head of the Luhansk regional military administration  Serhiy Hayday, who accused Russian forces of shelling private homes.

"Popasna suffered the most," Hayday said of the town, which is in Ukraine's eastern Luhansk region.

"In addition to the street fights, the Russian army is constantly shelling high-rise buildings and private houses," he said.

"Yesterday, locals withstood five enemy artillery attacks. However, not everyone survived. In the evening, [a] 66-year-old Popasna resident died, his wife was injured. Also, one more person died as a result of shelling," Hayday added.

Separately, Hayday said about 30 people had been evacuated from the nearby city of Severodonetsk, including 15 bedridden patients.

Settlements in Luhansk have come under heavy fire amid a broad Russian military push to take and hold more territory in the eastern Donbas region.

Russian forces continued shelling the city of Mykolaiv overnight, a Ukrainian regional governor said Saturday, prompting officials to impose a curfew ahead of the Easter period.

Kim added that a curfew would be in effect from 7 p.m. to 5 a.m. ahead of local Easter services.

Some background: The announcement comes a day after Hanna Zamazeeva, chief of Mykolaiv's regional council, said that at least 20 people had been injured in the region in the past two days, amid attacks by Russian troops.

Ukrainian officials have warned of unspecified provocations by Russian forces over the Easter holiday, which is observed by many Ukrainians according to the Julian calendar, and have urged citizens in some regions to mark the holiday at home.

The territory between Mykolaiv and Kherson to the southeast has seen intense fighting over the last three weeks as Ukrainian forces have launched counter-attacks.

Mykolaiv itself has been regularly shelled by Russian forces but remains under Ukrainian control.

"We are trying to evacuate the women, children and the elderly again today," she said.

"We are starting to gather around Port City shopping centre. If everything goes to plan the evacuations will commence at midday," Vereshchuk said in a statement on Telegram.

She warned, however, that Russian troops might open a “parallel corridor” for taking residents into Russian-controlled territories instead. She urged residents to be vigilant and “not to follow any deceit and provocations” by the Russian side.

Some background: US and European officials have claimed that Russian forces have been forcibly deporting residents of Mariupol to separatist-held territory in Ukraine and, in some cases, even into Russia, after stripping them of phones and identification and screening them through a so-called "filtration" process.

Ukraine has been evacuating civilians to the government-held city of Zaporizhzhia, but convoys must navigate through a series of Russian-held towns and military checkpoints.

Ukrainian officials have said over 100,000 people still remain in the southern city of Mariupol. The Russian government claims to control the strategic port, but Ukrainian fighters remain holding out in the city's massive Azovstal steel factory.

Russian forces have continued shelling the northeastern city of Kharkiv and the region, a Ukrainian military governor said on Saturday.

"The Russian occupiers continue to fire on the civilian infrastructure of Kharkiv and the region," said Oleh Syniehubov, head of the Kharkiv regional military administration. "During the day, the occupiers inflicted 56 strikes, as a result -- 19 wounded, two people died."

Civilians in Kharkiv have endured heavy shelling for days.

Russian forces continued to hold defensive lines around Izium, and claimed Ukrainian forces had carried out a successful counterattack to retake the settlements of Bezruky, Slatino and Prudianka and in the vicinity of Derhachi, Syniehubov added. CNN could not independently verify those claims.

The military governor announced that a curfew in the region would be in effect from 7 p.m. to 5 a.m. local time.

On April 17, Ukrainian President Volodymyr Zelensky said that in the four days before, 18 people had been killed and 106 wounded by Russian bombardments in Kharkiv.

Russia has captured dozens of small towns in its assault on the Donbas region, as Ukrainian officials describe continued heavy fighting throughout Donetsk and Luhansk.

Russia had, in recent weeks, refocused its war efforts from the north and center to the east after a failure to circle in on the capital, Kyiv.

On Friday, Russia revealed for the first time that its goal was to take "full control" over southern Ukraine as well as the eastern Donbas region.

Maj. Gen. Rustam Minnekaev, the acting commander of Russia's Central Military District, said Russian forces were fighting to establish a land corridor through Ukrainian territory connecting Russia to Crimea, the peninsula it annexed in 2014, said according to TASS, a Russian state news agency.

"Since the beginning of the second phase of the special operation, which began literally two days ago, one of the tasks of the Russian army is to establish full control over Donbas and southern Ukraine. This will provide a land corridor to Crimea," Minnekaev told TASS.

Olena Symonenko, an adviser to the Deputy Head of the Office of the President, said in televised remarks late Thursday that over the last 24 hour period, 42 more settlements had come under Russian control in the Donetsk region.

The UK Ministry of Defense, however, said Saturday that Russian forces had made no major gains in the past 24 hours, in the face of Ukrainian counterattacks.

Ukrainian air and sea defense have also been able to stop the progress of Russian air and maritime forces, the ministry added in a post on social media.

“Despite their stated conquest of Mariupol, heavy fighting continues to take place frustrating Russian attempts to capture the city thus further slowing their desired progress in the Donbas,”  the UK ministry said.

What a difference a few weeks make. Just last month, India was taking flak from the West for its relationship with Russia.

Not only was the South Asian country refusing to condemn Moscow's brutal assault on Ukraine, but its purchases of discounted Russian oil -- said critics -- were flying in the face of sanctions aimed at crippling the Kremlin's finances.

And the White House was making its displeasure clear, calling New Delhi "somewhat shaky" and speaking of its "disappointment."

Then all of a sudden, the West's tune changed. When Biden met Indian Prime Minister Narendra Modi this month, it was all diplomatic backslapping and soundbites about "a deep connection between our people" and "shared values." Then on Friday, UK leader Boris Johnson flew into Delhi to talk up trade ties and pose for costumed photo ops, all while glossing over "differences" regarding Russia.

Yet India's stance on Ukraine remains largely the same. It is still buying cheap Russian oil, and it remains quiet on Moscow's invasion. As recently as April 7, it abstained from a UN vote suspending Russia from the Human Rights Council.

Why India can buy Russian oil, and still be friends with the US

An evacuation column from the besieged southeastern city of Mariupol is planned for Saturday, according to Petro Andriushchenko, adviser to the Mariupol mayor.

"Today at 11:00 am (local), the evacuation of Mariupol residents to Zaporizhzhia will begin from the 'Port City' shopping mall," he said on Telegram. "Departure of the column is scheduled at 12:00 on the route: Mariupol-Manhush-Berdiansk-Tokmak-Orikhiv-Zaporizhzhia."

Andriushchenko said private vehicles can join the route, but only women, children and the elderly will be able to board buses.

Officials have said 100,000 civilians still require evacuation from the city, which has been battered by weeks of Russian bombardment. Ukrainian leaders have appealed for the Russian side to guarantee safe passage for civilians, but several previous evacuation attempts have failed due to shelling and danger on the routes.

Russian forces have made no major gains in the past 24 hours as they face Ukrainian counterattacks, the United Kingdom's Defense Ministry said in an intelligence briefing on Saturday.

Ukrainian air and sea defense have also been able to stop the progress of Russian air and maritime forces, the ministry added.

“Despite their stated conquest of Mariupol, heavy fighting continues to take place frustrating Russian attempts to capture the city thus further slowing their desired progress in the Donbas,” the ministry said.

On February 17, a team of young disabled Ukrainian swimmers traveled to Turkey to nurture their ambitions of becoming elite professionals.

The camp of seven budding athletes arrived with their three coaches in the town of Silivri, just outside of Istanbul, to take part in a two-week training program.

A week later their lives were upended when Russia invaded Ukraine.

Since the invasion began on February 24, there have been deadly airstrikes, and horrific scenes of mass graves and murdered civilians across Ukraine -- while global leaders have accused Russian forces of carrying out war crimes.

While one young swimmer has traveled to Poland with his mother, they have been in Turkey for two months now, and many of their family members are still marooned in Ukraine.

Team member Victoria Kharchenko, who has cerebral palsy, says her parents find comfort in the fact that she is safe.

"They're happy ... we don't need to stay in the air raid shelters, and do not hide," the 16-year-old athlete said. 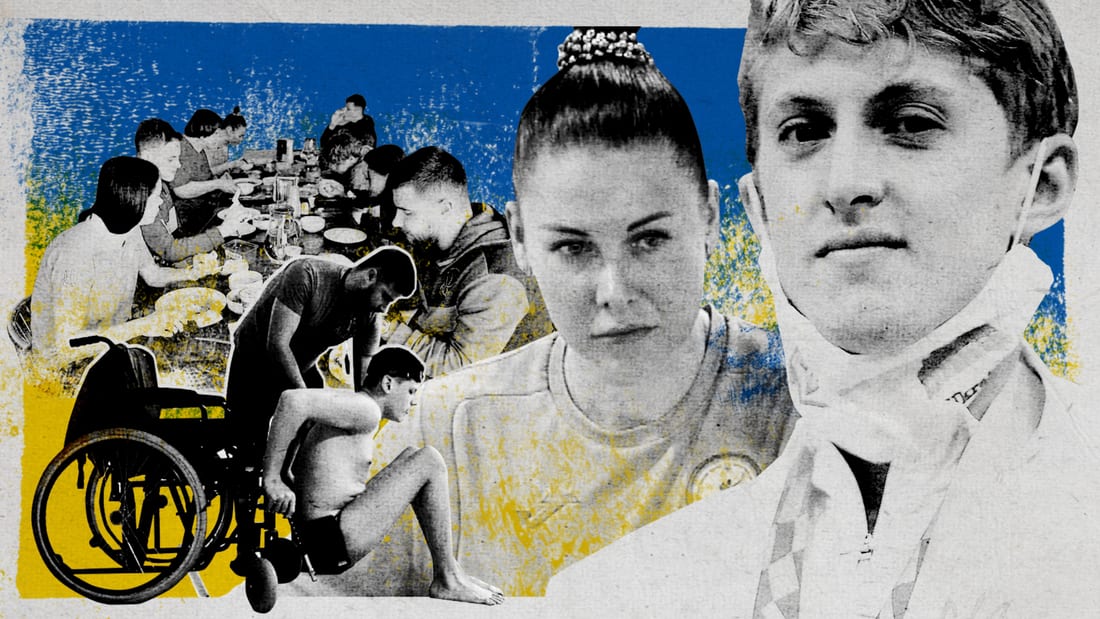 'My heart is torn': As war rages on at home, these young disabled Ukrainian swimmers are stranded in Turkey