Ukrainian officials have accused Russian forces of "robbing" wheat from parts of the country they have occupied, a move which increases the threat to global food security.

The Ukrainian Foreign Ministry said in a statement reported by Reuters: “The looting of grain from the Kherson region, as well as the blocking of shipments from Ukrainian ports and the mining of shipping lanes, threaten the world’s food security."

The ministry demanded that Russia stops "the illegal theft of grain, unblock Ukrainian ports, restore freedom of navigation and allow the passage of merchant ships.”

Through its illegal actions, Russia is robbing not only Ukraine but also consumers abroad."

"The United Nations estimates that about 1.7 billion people may face poverty and hunger due to food disruptions as a result of a full-scale war waged by Russia against Ukraine,” the ministry added.

Asked about the allegations by Reuters, the Kremlin said it had no information on the matter.

"The Russian occupiers are robbing the villagers," said the General Staff. "Thus, for example, over 60 tons of wheat together with the cargo trucks were stolen from the agricultural cooperative in the town of Kamianka-Dniprovska."

CNN is unable to verify these allegations independently.

Ivan Fedorov, mayor of the southern city of Melitopol, which has been held by Russian troops for weeks, also spoke about the removal of grain stocks.

"Today it has moved to an industrial scale," he said. "Yesterday we published a video of a convoy of 50+ cars with trailers taking grain out of our occupied territories ... And today we do not know where they sent it."

The wheat crisis: Ukraine is known as the "breadbasket of Europe," and is a key source of wheat and corn -- especially for countries in the Middle East and North Africa that depend on imports. The likely wholesale disruption of its harvest this year could be a disaster, leaving these countries in short supply -- and driving up prices for important agricultural goods.

A checkpoint in the Russian village of Krupets, Kursk, was hit by incoming shelling and mortar fire, said the regional governor in a Telegram post on Friday.

“This morning in the Rylsky district near the border was not peaceful. Around 8:00 a.m. (local time) a checkpoint in the village of Krupets was shelled with mortar fire. The firing points were suppressed by retaliatory fire from our border guards and the military,” said Gov. Roman Starovoyt.

He added that “there are no casualties or damage.”

The Kursk region, which borders Ukraine, has been the site of several recent attacks, according to Starovoyt. He also claimed Kursk saw incoming fire on Wednesday, and that two Ukrainian drones were shot down over the village of Borovskoye on Monday.

An operation to evacuate civilians from the besieged Azovstal steel plant in Mariupol is planned for Friday, according to a statement from the Ukrainian president's office on Friday.

The statement gave no further details.

Hundreds of civilians are thought to be trapped in the sprawling complex on the eastern outskirts of Mariupol, which was heavily bombed by Russian aircraft on Wednesday night and has faced relentless shelling for weeks.

Guterres said Russian President Vladimir Putin had agreed “in principle” for the UN and the Red Cross to be involved in evacuating civilians from the steel plant, and that he had held “intense discussions” with Ukrainian President Volodymyr Zelensky to make evacuation from Mariupol a reality.

“Today the people of Mariupol are in desperate need for such an approach. Mariupol is a crisis within a crisis,” Guterres said in Kyiv, speaking at a press conference alongside Zelensky.

The UN chief met with Zelensky and Ukrainian Foreign Minister Dmytro Kuleba on Thursday, following a visit to Moscow where he met Putin on Tuesday.

Heavy shelling by Russian forces is continuing along "the entire line of contact" in the eastern regions of Donetsk and Luhansk, according to the Ukrainian military.

Russians troops are also trying to inflict air strikes in certain areas, said the General Staff of the Armed Forces on Friday.

The Izium area of eastern Ukraine, located in the Kharkiv region, has become a staging ground for Russian forces as they try to advance through neighboring Donetsk and Luhansk. No offensive operations in that area have been conducted in recent hours, said the Ukrainian military.

"The main effort was focused on reconnaissance, identification of defensive positions of the units of the Defense Forces of Ukraine and hitting them with artillery fire," said the General Staff.

Further southeast, "in order to prevent the redeployment of our troops, the enemy is shelling the positions with artillery, mortars and multiple rocket launchers along the entire line of contact," it added.

Cutting off Russian pathways: An important bridge in southern Ukraine, which connects Russian-occupied Crimea with the Ukrainian city of Melitopol, has been destroyed, CNN reported on Thursday. Melitopol has been held by Russian forces since early March.

Melitopol Mayor Ivan Fedorov confirmed on Ukrainian television that Ukrainian special forces were responsible for cutting off the crucial bridge.

"Yesterday our military forces of special operation blew up the bridge, which was of great logistical importance for the occupiers, because with the help of this bridge they transported military equipment to the stations of Melitopol and Novobohdanivka," he said.

A fuel depot in part of the eastern Donetsk region controlled by Russian-backed forces was attacked by the Ukrainian military and set on fire during the night, a local official said.

Several social media videos showed the blaze in the depot in the Kirovsky district.

Alexei Kulemzin, the head of the separatist Donetsk administration, said that "as a result of shelling of Kirovsky district by Ukrainian shells, a tank at the oil depot...was damaged."

He said four transformer sub-stations had been damaged.

Some background: Ukrainian authorities have not commented on the incident, but the fire is one of several that have taken place recently at Russian-controlled fuel and ammunition depots.

​Novovorontsovka, Ukraine: The changing shape of Russia’s campaign in Ukraine can be seen here along the banks of the Dnipro River.

The eastern side has been controlled for weeks by Russian forces – but now they are pushing to seize the western side. The prize: To control the strategically significant river that winds from Russia through Belarus and Ukraine to the Black Sea.

After the failure of Russia’s fierce first assault, Moscow has shifted to a grinding and more methodical strategy to expand control of the eastern regions of Luhansk and Donetsk while carving out a territory along Ukraine’s southern coast.

The impact is visible in the small town of Novovorontsovka. A handful of Russian tanks are about a kilometer away across the river, pushing and probing – but so far kept at bay by Ukrainian forces.

But the signs of destruction and death are everywhere. A small motorboat sits damaged on the river bank. On April 7, four civilians were killed by Russian fire after more than a dozen got on board to flee the Russian occupation.

And more civilians are fleeing. On Thursday morning, a group of women gathered outside Novovorontsovka, having escaped Russian-controlled territory.

“We ran, ran, early in the morning,” a woman named Luda told CNN. “They didn’t let us out. We’re shields for them.”

The Russians took whatever they needed, including cars, she said. They drew Zs on everything, Luda said, a reference to the pro-war symbol that has been emblazoned on Russian military equipment.

"They say they’ve come to liberate us, these aggressors," Luda added. "They say America is fighting here, but using the hands of Ukrainians to do it."

Nearby, despite the threat of rocket fire, Ludmilla was raking the soil to plant onions. Her children have left, she said, but she’s staying behind with her 80-year-old mother.

Even though the windows of her home have been blown out, Ludmilla said she won’t leave.

"I’m here until victory," she said. 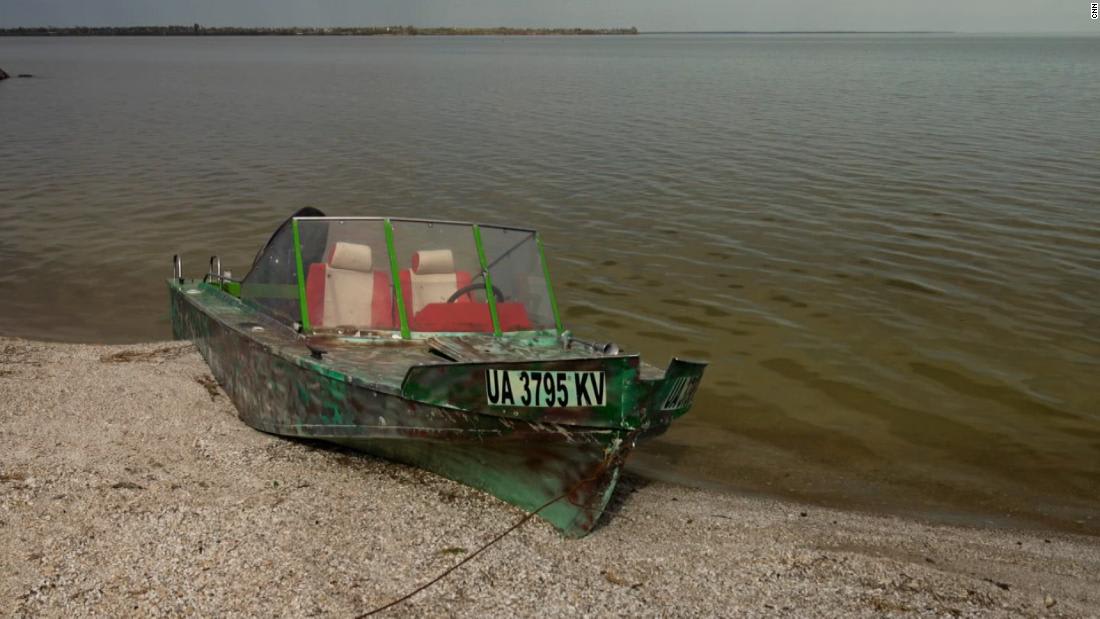 Ukrainian officials have condemned Russia’s missile attack on Kyiv Thursday night, saying it occurred as the United Nations Secretary-General Antonio Guterres was finishing a visit to the Ukrainian capital.

Here are the latest updates on the war in Ukraine:

An American citizen, Willy Joseph Cancel, was killed this week while fighting alongside Ukrainian forces, members of his family told CNN.

The 22-year-old was working with a private military contracting company when he was killed on Monday. The company had sent him to Ukraine, and he was being paid while he was fighting there, Cancel's mother, Rebecca Cabrera, told CNN.

Cancel, a former US Marine, according to his mother, signed up to work for the private military contracting company on top of his full-time job as a corrections officer in Tennessee shortly before the war in Ukraine broke out, Cabrera said. When the war began, the company, according to Cabrera, was searching for contractors to fight in Ukraine and Cancel agreed to go, Cabrera said.

"He wanted to go over because he believed in what Ukraine was fighting for, and he wanted to be a part of it to contain it there so it didn't come here, and that maybe our American soldiers wouldn't have to be involved in it," Cabrera said.

More background: Earlier this week a series of unexplained explosions occurred in parts of Transnistria which Ukraine described as a planned provocation by Russian security services. On Thursday, Russian Foreign Ministry spokesperson Maria Zakharova dismissed “sensational” claims about Russia preparing an offensive using its troops stationed in the region, as well as conscripts from Transnistria.