The prosecutor general of Ukraine said her office is opening new cases of alleged war crimes by Russian forces, with a total of 9,158 criminal cases "involving purely war crimes."

"We have already identified specific war criminals," said Iryna Venedictova. "There are 15 people in the Kyiv region for instance, 10 of them in Bucha. We are holding them accountable for torture, rape, and looting."

On the identification of victims in Bucha, Venedictova said that some bodies cannot be identified and DNA samples are collected.

"Unfortunately, we have grounds to open new cases every day: the death of civilians, bombing, deportation of our citizens and children to the occupied territories and to the territory of the aggressor state, etc," she said.

She said the cases covered the regions of Kyiv, Chernihiv and Sumy.

Venedictova added that Ukraine was receiving international assistance in its investigations.

"Now we have a team of French experts, and experts from Slovakia. We are waiting for the experts from Lithuania next Tuesday," she said.

In a signal that the United States is stepping up its support for Ukraine, House Speaker Nancy Pelosi traveled to Kyiv with a congressional delegation on Saturday, becoming the most high-level American official to meet with Ukrainian President Volodymr Zelensky since the war began more than two months ago.

The visit was kept under wraps until Pelosi and other Democratic lawmakers returned to Poland, where they held a press conference on Sunday and pledged to "stand with Ukraine until victory is won."

But there was no sign of a détente over the weekend, as fighting continued to rage on the front line in eastern Ukraine. The Ukrainian military said on Sunday that Russia was reinforcing its two-week-old offensive in the country's industrial heartland, pouring in more weapons and military equipment.

Here are some other developments:

There is a "chance" to evacuate civilians from the besieged city of Mariupol on Sunday, Mariupol's city council has announced.

It urges people to gather at 4 p.m. local time (9 a.m. ET) near a shopping center called "Port City" in order to evacuate them to the southern region of Zaporizhzhia.

"If you have relatives or acquaintances in Mariupol, try to contact them by all ways. Call, text and say that it is possible to go to Zaporozhzhia, where it is safe," the Council said on Telegram.

"We pray that everything works," it added.

A local telegram channel said earlier that through 3 p.m. local time a "green corridor" would be open for citizens wishing to enter territory "controlled by the enemy in the Kamensky district."

There are about 100,000 people still in Mariupol, even though most of the city has been severely damaged by weeks of shelling and airstrikes by Russian forces.

Some context: Mariupol is home to the Azovstal steel plant, which has been subjected to heavy Russian bombardment in recent weeks. Hundreds of people, dozens of whom are injured, are thought to be inside the steel-making complex.

Earlier Sunday, Russian state news agencies said that 46 civilians had been evacuated from the vicinity of the plant, quoting the Russian Ministry of Defense.

Their reports followed comments from a a Ukrainian commander inside the plant who said some civilians have been evacuated from the steel works after the introduction of a ceasefire.

It was hoped that these civilians, all women and children, would go to the "agreed destination" of Zaporizhzhia, Capt. Svyatoslav Palamar said.

As hundreds of evacuees arrived overnight at a processing center for internally displaced persons in the southern city of Kryvyi Rih, for one family it was an all-too-familiar experience.

For the second time in eight years, a Ukrainian family had been forced to flee their home, they told CNN.

Having lost their home in Crimea when Russia captured and annexed the territory in 2014, they moved north to Kherson.

Yet when Kherson was taken by Russia in the first week of March, the family were once again forced to abandon their home and flee north, this time to Kryvyi Rih.

They joined the 500 evacuees who arrived overnight at the city's Narodnyi Dim processing center, a CNN team was told.

The center has been open and supporting evacuees since the start of the war, with around 50,000 people registering and transiting through, said the center's acting head Natalya Patrusheva.

Spread over two floors, neat racks of clothes hold everything from small items for babies to clothing for adults. The CNN team saw boxes of food and other basic supplies piled up against the walls.

After being processed, evacuees are assisted by volunteers. Some evacuees move on by train to Lviv, in the far west of Ukraine, while others travel on by bus to cities such as Odesa, Vinnytsia, and Khmelnytskyi.

Some context: Over 7.7 million people are internally displaced in Ukraine after being forced to flee their homes by Russia's invasion, according to a report by the International Organization for Migration published last month.

According to the third Ukraine Internal Displacement Report, published April 21, the number of internally displaced people in Ukraine has risen to at least 17.5% – or more than one in six – of Ukraine’s pre-war population.

With more than 5 million refugees having left Ukraine for neighboring countries, according to the United Nations High Commissioner for Refugees, a total of at least 12.7 million people have been left displaced since the beginning of the Russian invasion in late February. 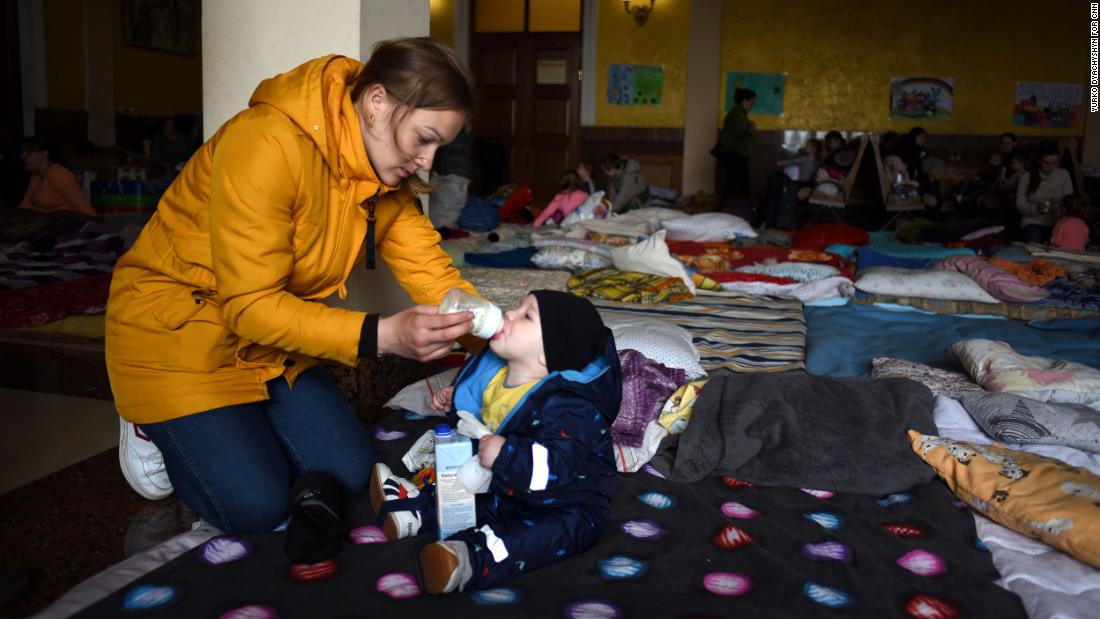 They fled Ukraine to protect their children. Now these mothers are returning home

House Speaker Nancy Pelosi said that she traveled to Kyiv on Saturday to meet with Ukrainian President Volodymyr Zelensky and send "a clear message to the world that America stands with Ukraine."

Pelosi led the first official US congressional delegation to visit the country since Russia's invasion began more than two months ago.

Pelosi said that she and Zelensky discussed humanitarian and financial assistance during her visit, which lasted just over three hours. She said it was "a great honor" to meet with Zelensky and "to convey to him a message of unity from the US Congress and a message of appreciation."

US President Joe Biden told reporters late Sunday morning that he had yet to speak with the Speaker about her trip.

US House Speaker Nancy Pelosi arrived with a Congressional delegation to meet with Ukrainian President Volodymyr Zelensky in Kyiv, Ukraine on April 30.

Pelosi, second in line to the presidency after the Vice President, becomes the most senior United States official to visit Ukraine since the war broke out more than two months ago.

Here is a selection of images from the historic meeting.

Ukrainian President Volodymyr Zelensky gave Nancy Pelosi a few symbolic tokens on her trip to Kyiv on Saturday, thanking the US House Speaker for her support of Ukraine.

Zelensky awarded Pelosi with "the Order of Princess Olga" for her "significant personal contribution" to strengthening Ukrainian and American ties. Olga was the first woman to rule Kievan Rus, the first East Slavic state. The order bearing her name is awarded to women who have achieved significant success in politics and society -- the personification in Ukraine of female strength.

He also gave Pelosi a Ukrainian flag that he and female members of parliament, including those she met with at the US Capitol recently, had signed, according to Pelosi's spokesman Drew Hammill.

House Speaker Nancy Pelosi's unannounced trip to Kyiv to meet Ukrainian President Volodymyr Zelensky comes as the United States and its allies are stepping up long-term support to Ukraine as Russia's invasion stretches into its third month.

I am grateful to you for this signal of strong support from the United States, the people and the Congress — bicameral and bipartisan support. I, as the President, our team and the people of Ukraine highly appreciate this signal. This shows that the United States today is a leader in strong support for Ukraine during the war against the aggression of the Russian Federation," Zelensky said, according to a statement published by the president's office.

Last week, responding to pleas from Zelensky, a group of 40 nations gathered by the US in Germany agreed to streamline and expedite the delivery of weapons to Ukraine. "We've got to move at the speed of war," said Defense Secretary Lloyd Austin, who met with Ukraine's president in Kyiv with Secretary of State Antony Blinken last week.

The House on Thursday passed legislation that would allow Biden to use a World War II-era law, known as the Lend-Lease Act of 1941, to swiftly supply weapons to Ukraine on loan. That law was originally created to help forces fighting Hitler, and reflects the urgency in Congress to support the Ukrainian armed forces.

President Joe Biden on Thursday asked Congress for an additional $33 billion aimed at supporting Ukraine over the next several months as Russia's brutal and unrelenting war enters a new phase. Biden also outlined a proposal that would further pressure Russian oligarchs over the war in Ukraine, including using money from their seized assets to fund Ukraine's defense.

The package is significantly larger than the other packages that have been put forward, and is more than twice as much as the $13.6 billion infusion of military and humanitarian aid that Congress approved last month.

Zelensky stressed the importance of the financial assistance in his meeting with Pelosi.

The signals that the United States and President Biden are giving today are very important. These are recent strong steps in defense and financial support for Ukraine, as well as decisions on Lend-Lease - we are grateful for that," Zelensky said.

The visit by Pelosi, who is second in line to succeed the president, signals a significant measure of commitment to supporting Ukraine from the most senior level of US leadership. 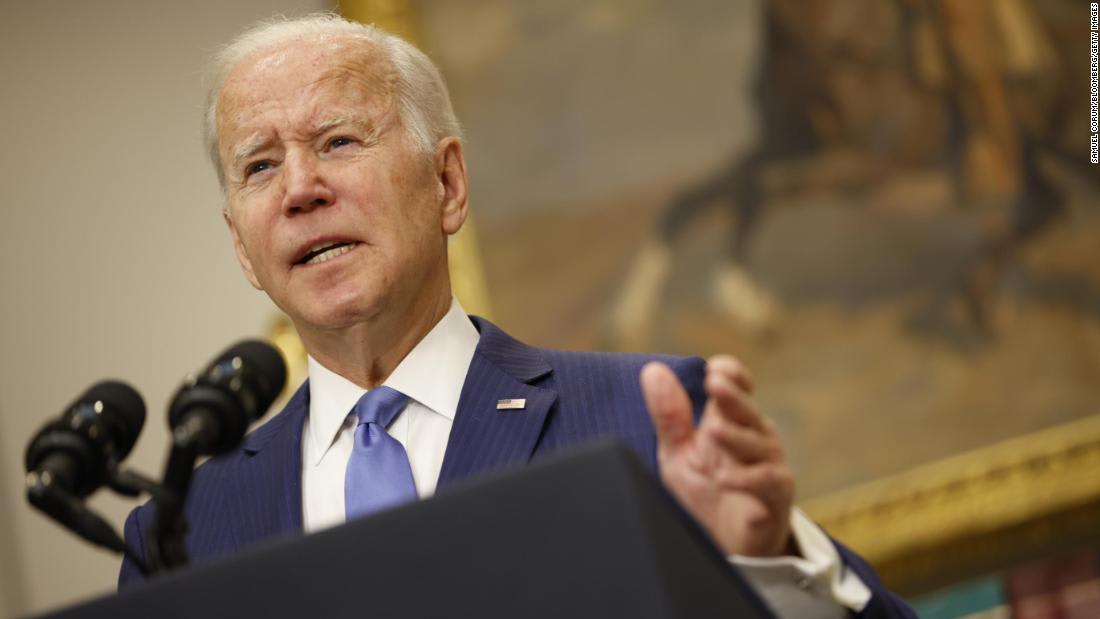 Two groups of civilians were evacuated from the vicinity of the besieged Azovstal steel plant in Mariupol on Saturday, Russian state news agencies have said.

A total of 46 people had left "residential buildings adjacent to Azovstal" and "were provided with accommodation and food," TASS and RAI Novosti said, quoting the Russian Ministry of Defense.

The Russian agencies did not disclose where the evacuees were being taken.

Earlier Sunday, a Ukrainian commander inside the plant said some civilians have been evacuated from the steel works following the introduction of a ceasefire.

Capt. Svyatoslav Palamar, the deputy commander of the Azov Regiment, said the ceasefire, which was supposed to begin at 6 a.m. local time, ended up starting at 11 a.m. local time.

Palamar said 20 women and children had been taken to the "agreed meeting point," in the hope that they would be evacuated to the "agreed destination" of Zaporizhzhia, a Ukrainian-controlled city in the country's southeast.

Some context: With the plant subjected to heavy Russian bombardment over the past several weeks, there are thought to be hundreds of people -- dozens of whom are injured -- inside the steel complex.

Yuriy Ryzhenkov, CEO of Metinvest Holding that owns the plant, told CNN Friday that at least 150 of the plant's 11,000 employees have been killed and thousands remain unaccounted for.

Harrowing footage shared by Ukrainian soldiers last week, said to be filmed in the vast network of tunnels under the plant, showed women and children living underground in a dark, damp basement.

In the videos, one mother said they've not seen the sun in weeks and will soon run out of food. An old woman, her head bandaged and bloodied, shivers on a cot. A baby wears a plastic bag fastened with duct tape around its small waist -- there are no diapers left. 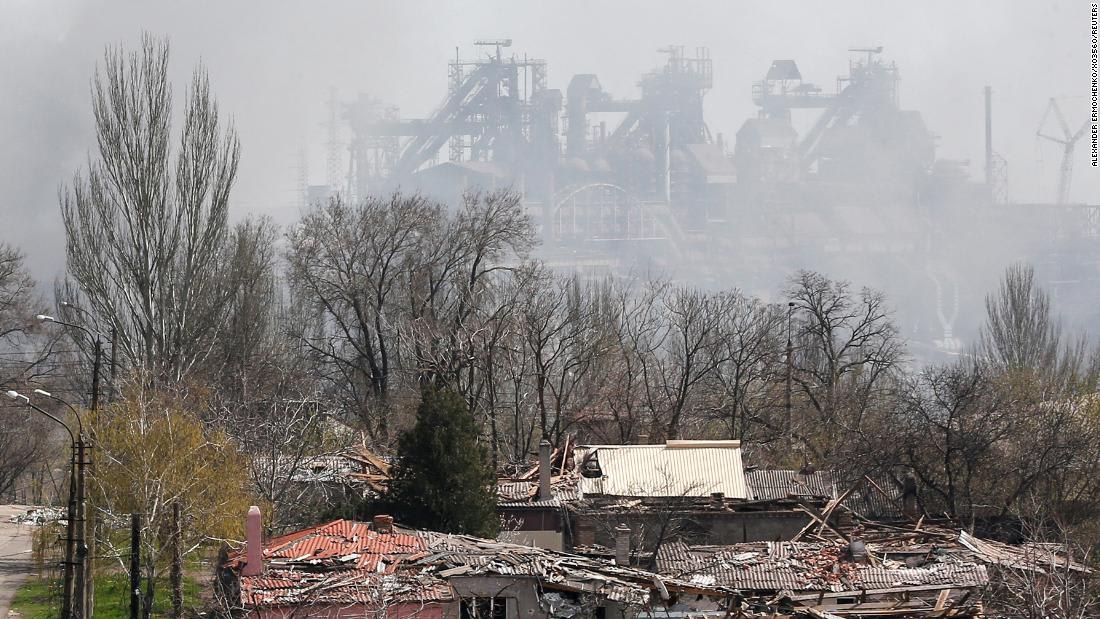