May 9 is when some US and Western officials believe that Russian President Vladimir Putin could formally declare war on Ukraine and fully mobilize his reserve forces.

"I think it should not be lost the significance, on anyone, the significance of when the timeline, of when this G7 meeting is happening, which is the day before Russia's Victory Day, which President Putin has certainly projected his desire to mark that day as a day where he is victorious over Ukraine. Of course, he is not," Psaki told reporters aboard Air Force One.

May 9 commemorates the Soviet Union’s role in defeating Nazi Germany in World War II. It is marked every year by a military parade in Moscow and a speech by Putin. At the end of the parade, Putin will lay a wreath at the Tomb of the Unknown Soldier.

Psaki added: "Having this meeting and conversation on Sunday is an opportunity to not only show how unified the West is in a confronting the aggression and the invasion by President Putin, but also to show that unity requires work, requires effort requires blood, sweat and tears sometimes."

Asked about what further sanctions might come from Sunday's call, Psaki said she did not have anything to preview.

More than "500,000 Ukrainians have been deported to Russia" since the start of Russia's war in Ukraine, President Volodymyr Zelensky said during an address to the Parliament of Iceland on Friday.

"They were forced to go there. Their documents and means of communication are confiscated. They are sent to faraway regions of that foreign land in order to assimilate there," said Zelensky.

He underlined that the number of deported Ukrainian's even exceeds the total population of Iceland.

CNN is unable to independently confirm the number of Ukrainians who have been taken across the border into Russian territory.

Ukraine said 41 people have returned to Ukraine in the latest exchange of prisoners with Russia.

Ukrainian Deputy Prime Minister Iryna Vereshchuk said there were 28 service personnel and 13 civilians in the group, which included 11 women.

The rector of the Orthodox Church of Ukraine was also among the released, she said.

US President Joe Biden will meet virtually with Ukrainian President Volodymyr Zelensky and his G7 counterparts on Sunday morning during a meeting of the G7 forum, a National Security Council spokesperson said.

“On Sunday morning, President Biden will participate in a G7 virtual Leaders meeting chaired by German Chancellor Scholz. The Leaders will be joined by President Zelenskyy of Ukraine,” according to the the NSC spokesperson.

Sanctions will be on the agenda for the meeting.

“They will discuss the latest developments in Russia’s war against Ukraine and its global impacts; showing support for Ukraine and Ukraine’s future; and demonstrating continued G7 unity in our collective response, including by imposing severe costs for [Russian President Vladimir] Putin’s war,” the spokesperson said.

Ukrainian President Volodymyr Zelensky said Friday that Mariupol is one of the most complicated points of this war, accusing Russians of blockades and torture with starvation, during a virtual event held by policy institute Chatham House to discuss the war.

When asked about the situation in Mariupol, Zelensky said all the international organizations — including Ukrainian ones — are prohibited from entering the area to provide water, food and other supplies to civilians. He added that the Russian military's treatment in Mariupol is "inhuman" and a "beastly attitude."

Zelensky also emphasized the importance of Mariupol by saying that if Russia kills civilians that could be exchanged as prisoners of war, then Ukraine cannot have any diplomatic talks with Russia afterward.

The Kremlin declined to confirm Friday whether a Victory Day parade will take place on Monday in the Ukrainian city of Mariupol, saying a wide celebration of Victory Day is currently impossible “for obvious reasons.”

“I can't tell on the behalf of the military if there are any plans,” Kremlin spokesperson Dmitry Peskov told CNN on a regular conference call with journalists, when asked if a Victory Parade is expected in Mariupol.

First deputy head of the presidential administration of Russia, Sergei Kiriyenko, previously had said that a parade on Victory Day this year in Donetsk and Luhansk could not yet be held, but time for that would come soon, according to state news agency RIA Novosti.

Some background: Western officials believe Russian President Vladimir Putin could formally declare war on Ukraine as soon as May 9, a symbolic day for Russia, paving the way for him to step his campaign.

May 9, known as "Victory Day" inside Russia, commemorates the country's defeat of the Nazis in 1945.

More details from the Kremlin: Peskov said Friday that May 9 is a “sacred” day for Russians, and it won't be "overshadowed" by the events unfolding in Ukraine.

“Victory Day for all Russians, for almost all residents of the former territory of the Soviet Union, is a sacred day, the main holiday, which is filled with symbolism, a sense of pain for the sacrifices that we have suffered through, and a sense of pride for our country and our victory. Therefore, nothing will overshadow it,” Peskov told journalists during a daily call with the media, when asked if the war, people dying in Ukraine and rumors of upcoming mobilization in Russia may overshadow the solemn Victory Day mood.

Peskov went on to say that "from the point of view of national pride, the significance of this holiday cannot be overestimated.”

The Kremlin confirmed Friday that Putin will attend the traditional Victory Parade on May 9 held in Moscow’s Red Square and will make a speech. At the end of the parade, Putin will lay a wreath at the Tomb of the Unknown Soldier.

This year’s parade is expected to be of a smaller scale than in previous years. According to the Kremlin, international leaders have not been invited to attend the festivities. “We didn’t invite anyone to Victory Day,” Peskov said last week.

The display of the military equipment is also expected to be smaller. According to Russian Defense Minister Sergei Shoigu, 11,000 people and 131 types of weapons will be involved in the military parade this year compared to 191 military vehicles and 12,000 people last year. The air show is expected to include 77 aircraft and helicopters, one additional aircraft compared to last year.

Russia has come to the Kherson region to "stay forever," and there should be "no doubt about that," according to a senior official in Russia's governing United Russia party, Andrei Turchak.

Russian state media RIA-Novosti said Turchak made the remarks while on a visit to Kherson, an important Ukrainian region north of Crimea that has been occupied by Russian forces since the early days of its invasion of Ukraine.

“There will be no return to the past. We will live together, develop this rich region, rich in historical heritage, rich in the people who live here," said Turchak, addressing Kherson residents.

He added that the status of the Kherson region will be determined by its residents.

"Let's not get ahead of ourselves. In any case, the status will be determined by the residents," Turchak said.

There had been reports that Russia would organize a referendum in the region, but no plans have been announced.

According to Russian state media, Turchak and the head of the self-proclaimed Donetsk People's Republic Denis Pushilin visited Kherson on Friday and met with the head of the new Russian-appointed administration of the Kherson region, Vladimir Saldo. 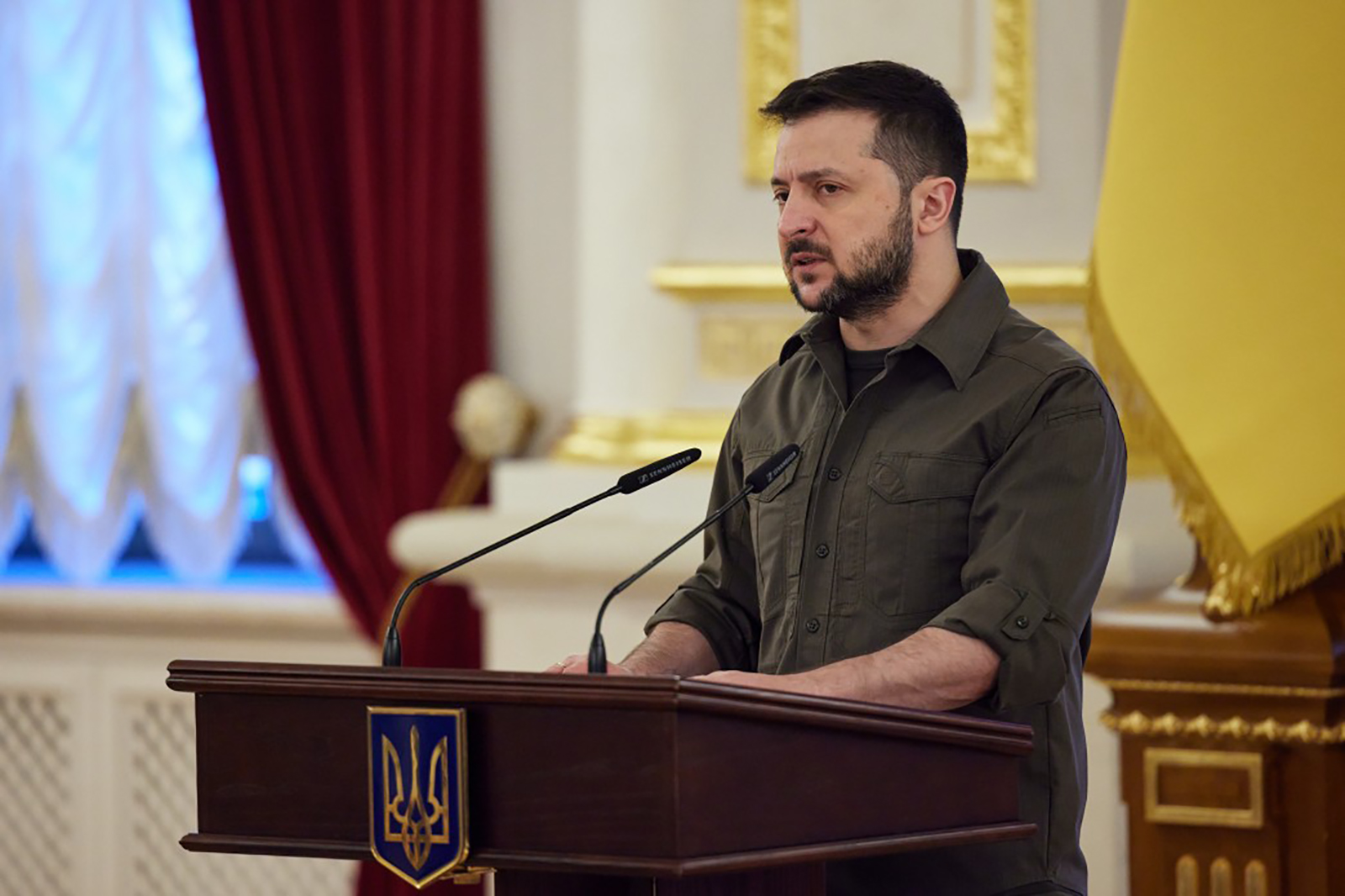 Ukrainian President Volodymyr Zelensky said Friday that Russia believes that it won't be held responsible for alleged war crimes committed in Ukraine because of the threat of nuclear weapons.

"Russia believes that their responsibility can be postponed for decades, and they don't think they will be responsible for the war crimes because they have the power of the nuclear state and nuclear blackmail after many decades."

Zelensky also claimed that Russia is calculating how much time is needed for nuclear missiles to hit European capitals.

On Thursday, Ukraine's Prosecutor General Iryna Venediktova testified at the hearings of the Helsinki Commission on alleged war crimes of Russia in Ukraine, telling the US government commission that the Russian army had committed more than 9,800 war crimes in 70 days of war.

The blockade of Ukraine’s Black Sea ports, along with infrastructure challenges, are preventing nearly 25 million tonnes of grain from being exported, a United Nations Food and Agriculture Organization (FAO) official said Friday.

"It's an almost a grotesque situation we see at the moment in Ukraine,” said Josef Schmidhuber, deputy director of FAO's markets and trade division, at a media briefing in Geneva. “There are nearly 25 million tonnes of grain that could be exported but that cannot leave the country simply because of the lack of infrastructure, the blockade of the ports.”

Ukraine is one of the world's largest grain-producing countries.

At the same time, in the months of July and August, the new crop will be coming in, Schmidhuber said, and "despite the war, harvest conditions don't look that dire."

But, he continued, “that could really mean that there is not enough storage capacity going forward in Ukraine particularly if there is no ‘wheat corridor’ opening up for exports from Ukraine.”

CNN previously reported that Russian forces are stealing thousands of tons of grain from Ukrainian farmers, as well as targeting food storage sites with artillery, according to multiple sources. Ukraine's defense ministry said Thursday an estimated 400,000 tons of grain had been stolen to date.

The theft of grain on such a huge scale — combined with the dislocation of war — could affect world markets. Melitopol Mayor Ivan Fedorov said: "If we do not harvest (the) next crop, the effect of hunger can be significant. And the main export route is ports which are currently blocked."