Russia's Ministry of Defense has given details of some of the military aircraft planned to take part in an aviation display over Moscow's Red Square Monday to mark "Victory Day."

The ministry said "77 planes and helicopters," will be showcased in the fly-past representing the number of years since the end of World War II.

According to a ministry statement issued on April 28, highlights of the display are said to include:

Using the Kremlin's approved language to describe Russia's invasion of Ukraine, the ministry said, "For the first time, eight MiG-29SMT fighters will fly over the Red Square in the form of the letter “Z” in support of Russian military personnel participating in a special military operation in Ukraine."

"The aviation part of the parade will traditionally be concluded with nine aircraft of the 'Russian Knights' and 'Swifts' aerobatic teams in the Cuban Diamond formation and six Su-25 attack aircraft, which will paint the sky in the colors of the Russian tricolor," the ministry said.

Some context: May 9, known as “Victory Day” inside Russia, commemorates the Soviet Union’s role in defeating Nazi Germany in World War II. Victory Day is marked by a military parade in Moscow, and Russian leaders traditionally stand on the tomb of Vladimir Lenin in Red Square to observe it.

Ukrainian President Volodymyr Zelensky says his government is now preparing for the second stage of the evacuation mission from Azovstal, focusing on "the wounded and medics."

"Of course, if everyone fulfills the agreements. Of course, if there are no lies," Zelensky said during his evening message. "Of course, we are also working to evacuate our military. All heroes who defend Mariupol. This is extremely difficult but it is important."

Hinting Russia is to blame for holding up the evacuation of the remaining soldiers trapped in Mariupol, Zelensky said "everyone understands the root cause of this complication," but he added the Ukrainian people will not lose hope.

"We do not stop. Every day we are looking for a diplomatic option that can work out," Zelensky said.

The president also thanked the International Red Cross and the United Nations for helping to carry out the first phase of the Azovstal evacuation, and said the government would try to establish humanitarian corridors for all residents of Mariupol and surrounding settlements on Sunday.

Ukraine has accused Russia of dropping a bomb on a school in Luhansk region where 90 people were taking shelter.

Serhiy Hayday, the head of the Luhansk region military administration, said a Russian aircraft had dropped a bomb on the school in the village of Bilohorivka, which is about 7 miles from the front lines.

Hayday said 30 people had so far been rescued from the rubble.

"Almost the entire village was hiding. Everyone who did not evacuate. After the social club was hit, the basement of the school was the only place of salvation, but the Russians took this chance from people," Hayday said.

The rescue operation is ongoing, he said. Photographs posted by the regional authorities show the school in ruins.

The Ukrainian government said the evacuation of many civilians from the Azovstal steel complex in Mariupol was completed on Saturday.

Catch up on the latest developments in the war here — and a look ahead to events on Sunday and Monday.

Azovstal evacuations: Ukraine's Deputy Prime Minister Iryna Vereshchuk said that "all women, children and elderly people" have been evacuated from the Azovstal steel plant in Mariupol. "This part of the Mariupol humanitarian operation has been completed," she said. There were no further details on numbers.

As of Saturday morning local time, more than 100 civilians — including children — were thought to be trapped inside the sprawling complex, along with several hundred soldiers, many of them injured.

The self-declared Donetsk People's Republic said Saturday that a total of 152 people had been evacuated from the city of Mariupol in the eight hours since 8 a.m. local time. It remains unclear whether the total includes any civilians who are trapped at Azovstal.

Odesa strikes: Russia fired six cruise missiles at the southwestern port city of Odesa on Saturday, according to Ukraine's military. Video from the city shows thick columns of black smoke in several locations.

The United Nations has called to reopen the port to help ease a global food crisis. 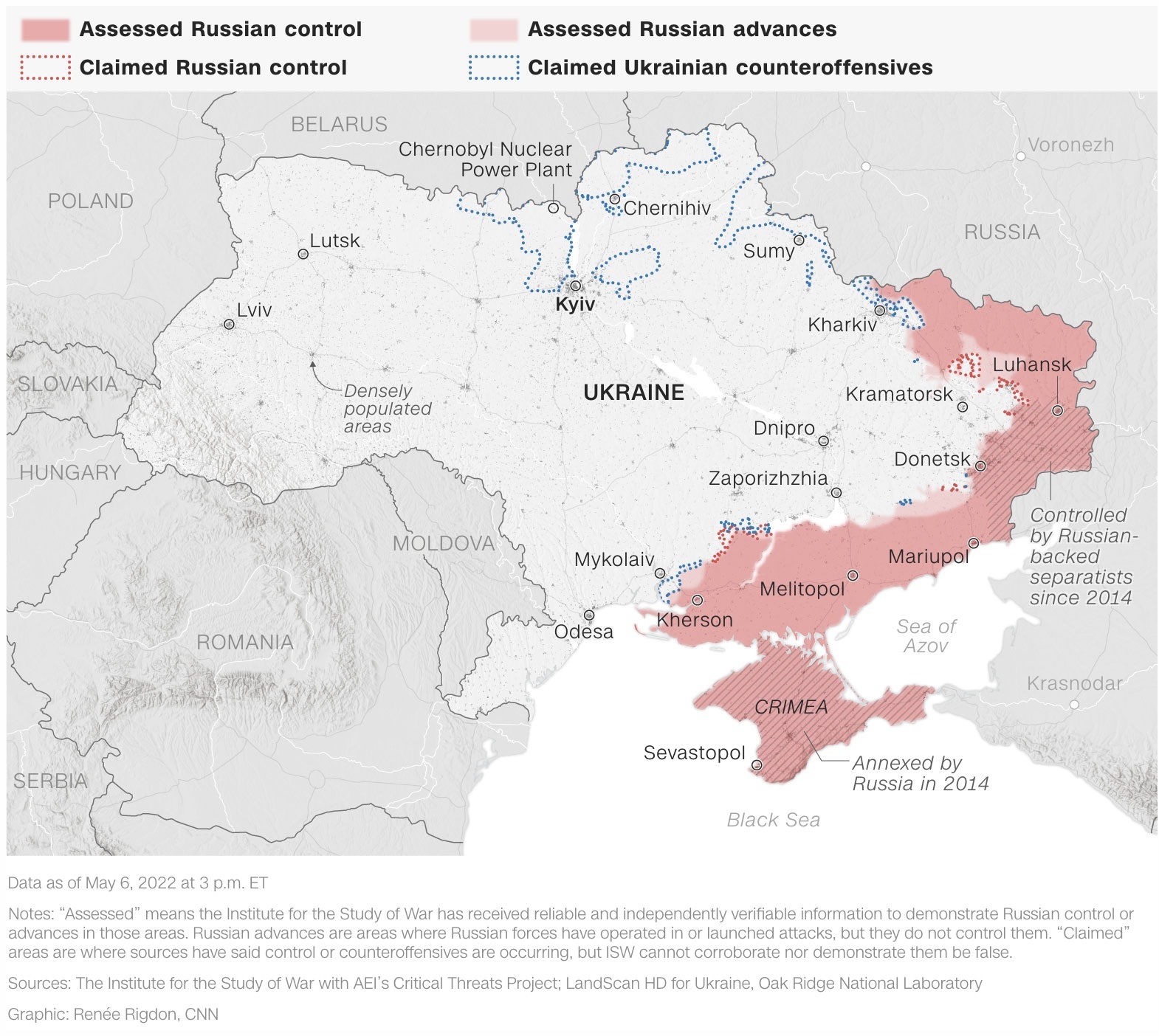 Here's what to be on the lookout for in the coming days:

G7 meeting with Zelensky: On Sunday, US President Joe Biden will meet virtually with the Ukrainian president and his G7 counterparts during a meeting of the G7 forum, deliberately scheduled ahead of Russia's Victory Day. Sanctions will be on the agenda for the meeting.

Victory Day: On Monday, Russia will commemorate the Soviet Union's role in defeating Nazi Germany in World War II. Western officials have long believed that Russian President Vladimir Putin would leverage the symbolic significance and propaganda value of the day to announce either a military achievement in Ukraine, a major escalation of hostilities — or both.

The Kremlin said Friday that May 9 is a “sacred” day for Russians, and it won't be "overshadowed" by the events unfolding in Ukraine. The Kremlin confirmed that Putin will attend the traditional parade held in Moscow’s Red Square and will make a speech. At the end of the parade, Putin will lay a wreath at the Tomb of the Unknown Soldier.

The Russian defense ministry claimed that its forces in the area of Snake Island off the coast of Ukraine have shot down several Ukrainian aircraft and drones.

What Russia is saying: In a briefing in Moscow, the defense ministry spokesperson, Maj. Gen. Igor Konashenkov, said that a Ukrainian Su-24 bomber, a Su-27 fighter aircraft, three Mi-8 helicopters with a landing force and two Turkish-made attack drones had been shot down.

"The Ukrainian amphibious assault boat Stanislav has also been destroyed," he said.

The ministry posted a video purporting to show Russian air defenses on Snake Island bringing down a drone.

What Ukraine is saying: Earlier, the Ukrainian military also reported combat around Snake Island but did not comment on any losses. It released drone footage which, it said, showed its forces destroying a Russian landing craft on the island. It said that two anti-aircraft missile systems had also been hit.

Snake Island is where, early on in the war, Ukrainian soldiers reacted with words of defiance against Russian attackers. According to a purported audio exchange, a Russian officer told the Ukrainians to lay down their arms, but a soldier responded: "Russian warship, go f*** yourself." All 13 Ukrainian defenders were at first believed to have been killed; it was later revealed that they were alive but had to surrender due to lack of ammunition.

CIA Director Bill Burns warned on Saturday that Russian President Vladimir Putin has staked a lot on the second phase of his war in Ukraine and believes that “doubling down” on the military conflict is still his best path forward.

It is this mindset, Burns said, that makes the second phase of the offensive at least as risky — and maybe even riskier — than the first phase of the conflict.

"He's in a frame of mind in which he doesn't believe he can afford to lose," Burns said about Putin during a Financial Times event in Washington. "I think he's convinced right now that doubling down still will enable him to make progress."

“His convictions about Ukraine and the reality of Russia’s capability to continue to grind away at Ukrainian resistance — I don’t know whether that’s been shaken yet,” he added. “So the stakes are quite high.”

That view is informed by what Burns said he has observed about Putin over the last several years.

"What I've seen, especially over the last decade, is him in a way stewing in a very combustible combination of grievance and ambition and insecurity all kind of wrapped together," he said.

Burns also said that the risk of the war escalating into a nuclear conflict should not be underestimated during the second phase, even though the US intelligence community does not see “practical evidence at this point of Russian planning for deployment … of tactical nuclear weapons.”

“Given the kind of saber-rattling … we’ve heard from the Russian leadership, we can’t take lightly those possibilities,” Burns said. “At a moment when … the stakes are very high for Putin’s Russia and those risks at this second phase of the conflict are serious and should not be underestimated.”

Ramifications outside Russia: Burns also said that Russia’s conflict in Ukraine has affected China’s calculations when it comes to “how and when” it goes about attempting to take control of Taiwan.

“Clearly the Chinese leadership is trying to look carefully about the lessons they should draw from Ukraine about their own ambitions in Taiwan,” Burns said.

“I don’t think for a minute it’s eroded Xi’s determination over time to gain control over Taiwan but I think its something that’s affecting their calculation about how and when they go about doing that,” he added.