The UK will provide a further £1.3 billion ($1.6 billion) in military support and aid to Ukraine, the country's Treasury said in a statement.

The announcement comes ahead of a virtual G7 summit on Sunday, which will include Ukrainian President Volodymyr Zelensky.

The pledge marks "the highest rate of UK military spending on a conflict, since the height of the campaigns in Iraq and Afghanistan," according to a Treasury statement Saturday.

The new pledge almost doubles the UK’s previous spending commitments on the war in Ukraine.

Per the statement, it adds up to Britain’s "existing £1.5 billion ($1.85 billion) support, which included around £400 million ($494 million) in humanitarian aid and grants to the Ukrainian government, and unlocking over £700 million ($864 million) in lending from the World Bank through guarantees."

Johnson and his defense secretary will host a meeting of defense companies later this month "to discuss ramping up production in response to increased demand created by the conflict in Ukraine and a global shift away from Russian-made weaponry," the statement added.

The intense fighting in eastern and southern Ukraine has forced millions of people to flee to the country’s westernmost regions.

At least 200,000 people have arrived in Lviv alone, according to the city’s mayor Andriy Sadovyi, pushing the city to its limits.

Many locals have opened their homes to the refugees and the city has also recently built two container towns for families who were staying in temporary shelters in schools and sports facilities.

Away from the city center, the site was chosen in the hope that it will offer some calm to its future residents.

Peace and quiet is what people like Tetiana, who is expecting her fifth child in July, are dreaming of.

She and her husband want to name their son Victor to commemorate the victory they are expecting Ukraine to achieve.

This is not the first time that she and her older children had to run from war. In 2014, the family lived in Horlivka when it became part of the separatist Donetsk People's Republic.

There, hiding in a cellar, she gave birth to her daughter Milana. When the family’s house was destroyed, she moved to Kamianske, to a container shelter much like the one she currently calls home in Lviv.

After four years there, the family moved to Slovyansk, where her husband — who is now fighting for Ukraine on the frontline — got a good job. They dreamt of buying a house and raising their children in peace.

Instead, she is once again sheltering in a container with her children, hundreds of miles away from her husband.

Tetiana says that she has been offered a chance to move to the new buildings as soon as they are ready, potentially in a couple of months' time.

Anton Kolomieytsev, Lviv’s chief architect, said he and his colleagues are trying to think months and years ahead, knowing some refugees will likely stay long-term.

"They have nowhere to go. Many of them will have to stay here even after the end of the war," he said.

Containers are a good temporary solution, but they are expensive. According to Kolomieytsev, one square meter of container housing costs $800, a price that is comparable to the cost of building regular houses.

Kolomieytsev said he wants the city to build apartments which internally displaced people would be able to rent for 10 years for a lower price before having the right to become their owners.

But he says his grand plans will rely on international donors. The public coffers have been completely depleted by the war.

A senior official in the Luhansk region has said that the chances of finding anyone still alive inside the school that was sheltering around 90 people when it was bombed by a Russian aircraft on Saturday afternoon are "very small."

"The explosion happened inside the building. Rescuers [are] dismantling the debris as quickly as possible. The chances of finding [anyone still] alive are very small. There were 90 people inside the school building; 27 survived, 60 people most likely died."

The bodies of two people were found in the debris, Hayday said in a Telegram post Sunday.

A Russian aircraft dropped a bomb on the school in the village of Bilohorivka, which is about seven miles from the frontlines, according to Hayday.

He said fighting had continued into Sunday on several fronts in Luhansk -- including Bilohorivka, Voyevodivka, and Rubizhne. He also said there was an extremely difficult situation around Hirske.

Near Popasna, Russian artillery hit the house where 11 people were hiding in the basement, he said. Rescuers were dismantling the debris.

Hayday said Ukrainian troops had withdrawn a "little way" from Popasna. "Since the city was destroyed, our troops retreated to more fortified positions."

Russian forces have made minor advances on one front near the city of Izium, according to the Ukrainian military, but are also on the defensive near Kharkiv as a Ukrainian counter-attack continues.

The General Staff of the Ukrainian armed forces said Sunday the Russians had captured the northern outskirts of the village of Shandryholove as they try to push south from the Izium area into the Donetsk region.

The enemy concentrated its main efforts on "preparations for the continuation of the offensive" in the area.

Along other front lines there were few changes, the General Staff said, with the Russians using artillery against Ukrainian defenses.

In the Kharkiv area, the General Staff said that the Russians were concentrating on "preventing the further advance of our troops towards the state border of Ukraine to the north and northeast of Kharkiv."

To that end they were shelling villages recently recaptured by Ukrainian forces -- such as Prudyanka and Slatine -- and trying to strengthen their defensive positions.

In the south-west of Ukraine, the armed forces said "the situation remains tense."

The General Staff confirmed clashes on Snake Island, a small island off the Romanian and Ukrainian coastline. It said that, during Saturday, one Russian Mi-28H helicopter as well as a number of drones had been destroyed by anti-aircraft missiles. The military's Operational Command (South) later published drone video purporting to show a Russian helicopter on Snake Island being destroyed.

Sixty people are feared dead following an airstrike on Saturday on a school in the Luhansk region where 90 people were sheltering, according to a local official.

Serhiy Hayday, head of the Luhansk Regional Military Administration, said 30 people sheltering in the school had been rescued, of which seven were injured.

The bodies of two people were found in the debris, Hayday said in a Telegram post on Sunday, adding that it is "likely that all of the 60 people left under the building’s wreckage were killed."

A Russian aircraft had dropped a bomb on the school in the village of Bilohorivka, which is some seven miles from the frontlines, according to Hayday.

It was no coincidence that his invasion of Ukraine came a day after Defender of the Fatherland Day, a celebration of Russia’s military achievements. It was on that same occasion in 2014 that Putin took the first step in annexing Crimea from Ukraine, through orchestrated pro-Russian protests on the peninsula.

The leader had clearly hoped to have more to celebrate by this Victory Day on Monday, the country’s most patriotic of dates, marking the Soviet Union’s role in defeating Nazi Germany in World War II.

Russia’s justification for war in Ukraine suggested a deadline for success by Victory Day.

Even though the Kremlin’s well-oiled propaganda machine has been going at full steam since the February invasion, it will be difficult for Putin to twist Russia’s losses into true victory on Monday.

If anything, the operation in Ukraine has been an embarrassment for him – at least on the international stage. 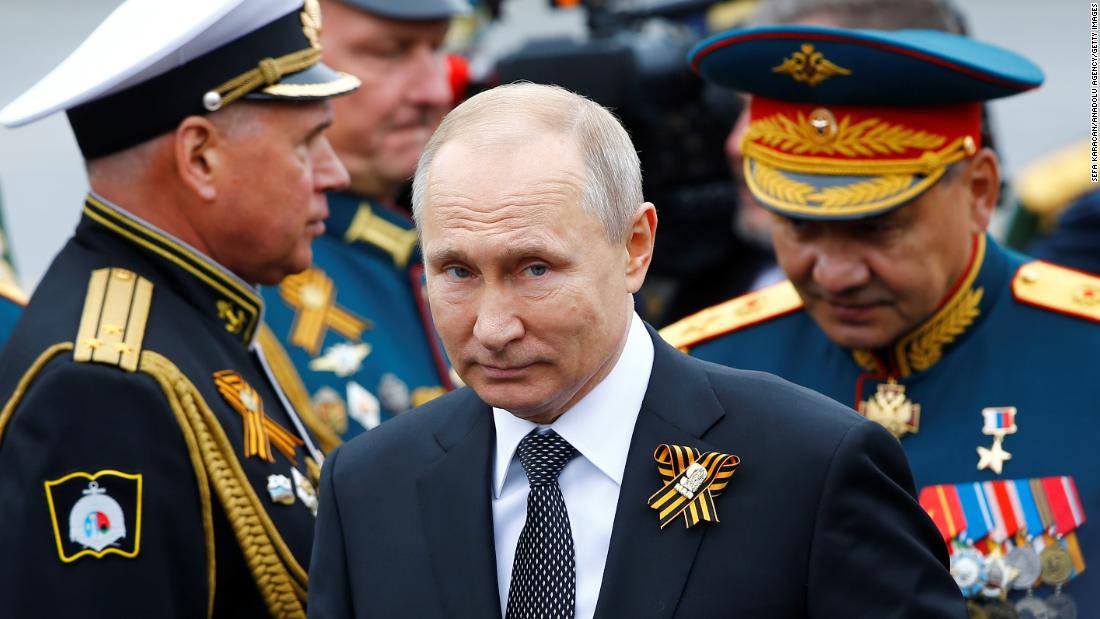 Putin has put himself at the center of Russia's Victory Day. But he has little to celebrate