Ukrainian officials have commented on the apparently muted commemoration of Victory Day in occupied Mariupol.

An adviser to the Mariupol mayor, Petro Andriushchenko, said there had been no parade but that flowers were laid at a memorial recently refurbished by Russian-backed separatists.

To celebrate May 9, the occupiers lit an eternal fire on the Savur Mohyla [war memorial in Donetsk oblast] from a torch from the eternal fire in Moscow. The grotesque combination of the traditions of the Olympics and the Ascension of the Blessed Fire at Easter is the best demonstration of the essence of Victory Day for Russians," Andriushchenko said.

The leader of the self-declared Donetsk People's Republic (DPR), Denis Pushilin, lit the eternal flame in Mariupol to mark Victory Day, according to video released by the DPR Telegram channel "PRO_Republic."

Separately, the Mariupol city council said: "The occupiers celebrate Victory Day on the bones of Mariupol residents. Hundreds of citizens killed by the Russian army continue to be taken to the mass grave near the village of Vynohradne."

"I was struck by the way that he referred at least to the battlezone... as Donbas, rather than the whole of Ukraine," he said. He added that the speech provided no sense that Russia was backing down from the fight.

We are fighting for our children's freedom, and therefore we will win," he said.

"We will never forget what our ancestors did in World War II, which killed more than eight million Ukrainians. Very soon there will be two Victory Days in Ukraine. And someone won't have any.

"We won then. We will win now. Happy Victory over Nazism Day!"

Ukrainian activists in Kherson have claimed that Russia has brought in people from Crimea to bolster the numbers attending.

Russian state media have been quick to report on Victory Day celebrations in occupied parts of Ukraine.

State-run news agency RIA Novosti reported that in Kherson, a procession in memory of the heroes of the Great Patriotic War was taking place for the first time.

Vladimir Saldo, the head of the city administration, congratulated residents who gathered in the Park of Glory with portraits of their relatives who participated in the war, the news agency said.

People with Russian flags and a large banner with the inscription "Immortal Regiment" are walking from the park through the streets of the city, according to RIA Novosti.

The videos available so far suggest a modest turnout for the rally.

On Monday, Kirill Stremousov, the Russian-appointed deputy chairman of the region's military-civilian administration, told RIA Novosti that the Kherson region would strive for integration with Russia.

"We are not planning to hold a referendum and create a republic," he told the agency.
"Today, based on the opportunities that we have, we will integrate as much as possible into the Russian Federation."

In a speech marking Russia's Victory Day on Monday, President Vladimir Putin sought to link his country's struggle against Nazi Germany in World War Two with his invasion of Ukraine and baselessly claimed the West had given him no choice.

Putin said the intervention in Ukraine was necessary as the West was creating "threats next to our borders" and "preparing for the invasion of our land."

He also said the West didn't want to hear Russia's proposals for dialogue.

"NATO countries did not want to hear us," Putin said, adding that that means "they had very different plans and we could see that."

"Russia gave a preemptive rebuff to aggression -- it was a forced and sovereign decision," he said.

Putin told troops that "today you are defending what your grandfathers and great-grandfathers fought for."

He also addressed the soldiers of Donbas" who "together with Russian soldiers" are fighting for the "motherland." Donbas, a sprawling heartland region that blankets much of eastern Ukraine, has been the front line of Ukraine's conflict with Russia since 2014.

Fighting has intensified in the region in recent weeks as Putin refocused his war strategy following stiff resistance from Ukrainian forces.

"I address the servicemen of Donbas," Putin said in the speech. "You are fighting for the motherland, for its future, so that lessons of World War Two are not forgotten," he said, adding, "there is no place in history for the punitive divisions of Nazis."

"We bow our heads in the memory of our comrades in arms who died in the just struggle for Russia," he said.

After those remarks, a moment of silence followed.

The air portion of the Victory Day parade in Moscow has been canceled because of weather, Kremlin spokesman Dmitry Peskov told state-run news agency RIA Novosti.

The ceremony was due to feature 77 aircraft flying over Moscow's Red Square, commemorating the 77th anniversary of the Soviet Union defeating Nazi Germany in World War Two.

Russia's annual Victory Day parade in Red Square in Moscow has started. The commemoration, which marks the end of World War Two, got underway when Russian President Vladimir Putin arrived to take his seat in the grandstand with top officials.

Western officials speculate Putin could use the day to formally acknowledge Russia's war with Ukraine, allowing him to step up his campaign.

This year's Victory Day parade in Russia — marking the 77th anniversary of the Soviet Union defeating Nazi Germany in World War II — is expected to feature 77 aircraft flying over Red Square in Moscow, the Russian Defense Ministry said in a report on the state-run TASS news agency.

Among those aircraft will be eight MiG-29 fighters flying in a “Z” formation to show support for Russian troops fighting in Ukraine, the ministry said, according to the report.

The letter “Z” has become the symbol for the war, which Russia calls a “special military operation,” and it has been emblazoned on most Russian military vehicles operating in Ukraine.

The parade's aerial portion will also include an Il-80 airborne strategic command and control aircraft, also known as a "doomsday plane" for its ability to be used as an airborne command center in the event of nuclear war.

In the ground portion of the parade, 131 weapons systems — including intercontinental ballistic missile launchers and T-72, T-90 and T-14 tanks — will be shown, the ministry said. 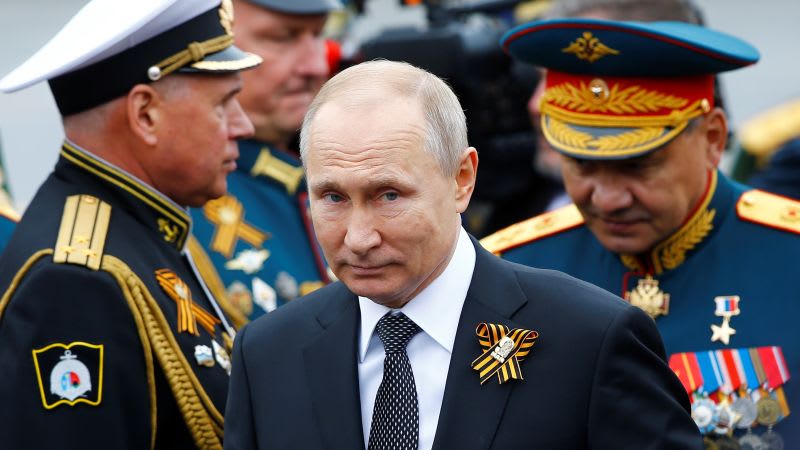 Putin has put himself at the center of Russia's Victory Day. But he has little to celebrate | CNN

The Ukrainian military says that Russia is holding back some of its forces within its borders to prevent a Ukrainian counterattack that has made some headway east of Kharkiv.

In its latest operational update, the armed forces' general staff says that "in order to prevent the advance of units of the Armed Forces of Ukraine, the enemy has concentrated up to nineteen battalion tactical groups in the Belgorod region" of Russia.

The Russians are holding back units as Ukrainian units get closer to the Russian border, analysts say.

Inside Ukraine, the general staff says the most intense activity is in Donetsk region, where Russian forces are trying to advance towards the town of Lyman, a major transport hub.

In other parts of the region, it says, "the enemy has increased its firepower and is trying to break through the defenses of our troops."
Even so, it says, Russian forces remain "focused on the regrouping of units, replenishment of ammunition, fuel, [and] maintenance of previously occupied positions."

The general staff says it expects the Russians to resume an offensive towards the village of Sulyhivka as they try to make progress from the Izium area. Over the past month, the Russians have made modest gains in the area but have taken no settlement of any consequence.

Luhansk: On the Luhansk front, the increase in Russian shelling has caused more civilian casualties and hampered rescue operations.

Serhiy Hayday, head of the Luhansk region military administration, said rescuers had lost contact with 11 people hiding in a basement in Shypilovo. He said it was impossible to completely dismantle the wreckage of damaged buildings in Bilohorivka — where a school sheltering civilians was hit at the weekend — or Shypilovo.

"With the support of aircraft and artillery, the enemy focused its efforts on trying to take control of Rubizhne and prepare for the continuation of offensive operations in the direction of Lysychansk. The enemy increased firepower, trying to break through the defenses of our troops," he said.

Russian forces have made only minor territorial gains in Luhansk but now have control of the ruined town of Popasna.

Southern Ukraine: The general staff alleged that in occupied parts of Zaporizhzhia region in the south, the Russians are seizing the personal documents of civilians and will only return them if they attend ceremonial events to mark Victory Day. CNN is unable to verify the claim.

After a weekend of dueling claims about combat over Snake Island in the Black Sea, the Odesa military administration says: "There are [Russian] Black Sea Fleet ships and submarines with cruise missiles on board constantly maneuvering and regrouping."

"The number of boats has increased. So far, we know of six ships and two submarines," it said.

The Odesa military administration repeated the list of Russian units it says it destroyed over the weekend: a small landing craft, two patrol boats, and a vessel carrying anti-aircraft defenses to Snake Island, as well as a helicopter.