A senior US defense official told reporters Tuesday that 89 of the 90 howitzers the US agreed to give to Ukraine have been transferred to Ukrainian possession.

"Almost 370 Ukrainian soldiers" have completed training on those M777 howitzer artillery systems in locations outside of Ukraine conducted by the US and other NATO allied countries, and 29 Ukrainian soldiers "are completing, wrapping up their maintenance course," on the howitzer systems, the official added.

"It’s a two-week course, so about 29 have finished it; there’s another 17 going through it right now," the official said.

In other ongoing trainings, 60 Ukrainian soldiers "have completed training on the M1-13, the armored personnel carrier," the official said. Training on the US Phoenix Ghost, an unmanned aerial system, is also ongoing.

"There is training for a small number ongoing outside of Ukraine on the Phoenix Ghost, there have been others ahead of them that have already returned to Ukraine. So that’s ongoing," the official added.

The intelligence arm of the Ukrainian defense ministry said that grain stolen by Russian troops in occupied areas is already being sent abroad.

The intelligence directorate claimed that a "significant part of the grain stolen from Ukraine is on dry cargo ships under the Russian flag in the Mediterranean."

"The most likely destination is Syria. Grain may be smuggled from there to other countries in the Middle East," it said.

The directorate also said the Russians "continue to export food stolen in Ukraine to the territory of the Russian Federation and the occupied Crimea."

It said that in one of the main grain-producing areas — around Polohy in the Zaporizhzhia region — grain and sunflower seeds in storage are being prepared for transportation to Russia.

A column of Russian trucks has left the town of Enerhodar, which is also in the Zaporizhzhia region, under the guard of the Russian military, the directorate claimed. The final destination of the column was Crimea, it said.

Grain was also being stolen in the Kharkiv region, and 1,500 tons of grain had been taken from the village of Mala Lepetykha in the Kherson region to Crimea.

Last week, the defense ministry said nearly half a million metric tons of Ukrainian grain had already been stolen. 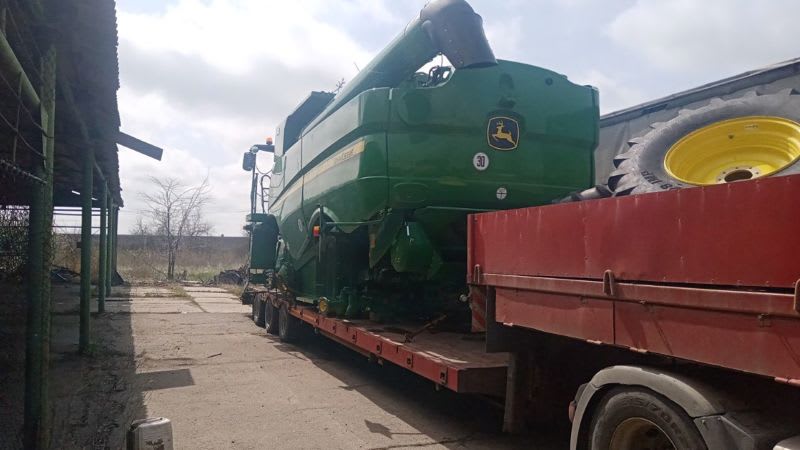 The Armed Forces of Ukraine said that the Russians have sent about 500 troops from occupied areas of the Donetsk and Luhansk regions north into the Kharkiv region.

They gave no explanation for the move, but CNN reported earlier Tuesday comments by local officials in the Kharkiv region that suggested some Russian troops were being sent northward to reinforce supply lines from the border.

Local authorities said there is "a mass withdrawal of Russian troops from the territory of Borova and Bohuslavka in the direction of Kupyansk."

Kupyansk is an important Russian logistics hub inside Ukraine and may become vulnerable if a Ukrainian counterattack in the region is sustained.

That attack made further progress Tuesday, according to the General Staff of the Ukrainian Armed Forces, with four more settlements to the north and east of Kharkiv falling under Ukrainian control.

CNN has geolocated video from one of those settlements, showing the Ukrainians in control. The new gains put Ukrainian units within a few kilometers of the Russian border in several areas.

Elsewhere in Ukraine, the Ukrainians said Russian forces continue to try to take the town of Rubizhne in Luhansk region, but without success. Officials said Ukrainian units had withstood several attacks in the Luhansk region.

In the Donetsk region, the General Staff said the Russians were trying to break through Ukrainian defenses north of Sloviansk, around the settlements of Oleksandrivka and Shandryholove.

This area has seen almost constant fighting for around two weeks, but the Russians appear to have made minimal progress on the ground.

Overall, the General Staff's report suggests that Ukrainian units are under pressure but resisting on most fronts while taking territory in Kharkiv as the Russians fall back toward the Oskil river.

A US nonprofit involved in rescue and evacuation operations in Ukraine during the Russian war said that it has freed an American citizen and his family from Russian forces on Tuesday.

Florida-based nonprofit Project Dynamo said in a statement that on Tuesday, in the vicinity of southern Ukraine’s Mykolaiv region, one of its exfiltration teams "successfully rescued" Kirillo Alexandrov, a 27-year-old American citizen, and his family.

Their release comes after more than a month of negotiations, the group said.

Bryan Stern, co-founder of Project Dynamo, told CNN that Alexandrov and his Ukrainian wife and mother-in-law were taken by Russian forces more than a month ago in the Kherson region. They had been held in a building occupied by the Russians and the Russian security services would not allow them to leave, Stern said.

The Russians had charged Alexandrov with spying, Stern told CNN.

Russia’s defense and foreign ministries have not yet responded to CNN's request for a comment.

Stern said he has been in regular contact with the US State Department about his efforts.

“We are aware of these reports. Due to privacy considerations, we have no further comment,” a State Department spokesperson said Tuesday.

Stern, in a press release, described the extensive operation to secure Alexandrov’s release:

“We’ve had more than a dozen team members from Project DYNAMO spread out across Poland, Ukraine, Romania, and the U.S. developing an array of plans from airborne operations in Russia to maritime extraction options within Ukraine. Nothing was off the table and countless hours were spent navigating the murky world of international security services and diplomacy between two countries at war, all with a young American in the middle.”

Stern said that Alexandrov and his family members are healthy and were fed by the Russians while they were detained.

US Secretary of the Army Christine Wormuth said the timeline for replacing US stocks of Stinger and Javelin missiles that the US has given to Ukraine to counter Russia's invasion will "vary depending on what the systems are."

"On the Javelins, I think Raytheon is trying to really accelerate, whether they can come inside of a one-year period, I am not sure, I think it may take a little more time, but we are trying to work aggressively with industry in those cases," Wormuth said.

"We have not had an open production line for Stinger for some time, we do still have some missiles, some Stinger missiles that we can provide, but there’s an obsolete part that we’re going to have to figure out how to work around, you know, do we design around that, or sort of bring forward a next-generation Stinger, and I think that will take more time," Wormuth said.

The European Union and the United Kingdom have blamed Russia for a hack that knocked out internet service for tens of thousands of satellite modems in Ukraine and elsewhere in Europe at the onset of Russia’s invasion on Feb. 24, the EU and UK governments said Tuesday.

The cyberattack on a satellite network owned by US-based telecommunications firm Viasat is one of the most consequential cyber incidents of the war in Ukraine: It disrupted communications in Ukraine an hour before Russia’s full-scale invasion, and the collateral damage included knocking thousands of wind turbines offline in Germany that relied on the satellite network.

A top Ukrainian cyber official, Victor Zhora, on March 15 called the hack “a really huge loss in communications in the very beginning of the war.”

“This unacceptable cyberattack is yet another example of Russia’s continued pattern of irresponsible behaviour in cyberspace, which also formed an integral part of its illegal and unjustified invasion of Ukraine,” the EU’s executive body, the European Council, said in a statement Tuesday.

The UK’s Foreign, Commonwealth and Development Office said that “new UK and US intelligence suggests” Russia was responsible for the hack of the Viasat network.

The United States' response: US Secretary of State Antony Blinken said Tuesday that in support of the EU and others, the United States “is sharing publicly its assessment that Russia launched cyber attacks in late February against commercial satellite communications networks to disrupt Ukrainian command and control during the invasion, and those actions had spillover impacts into other European countries.”

In his statement, Blinken also said the US “has assessed that Russian military cyber operators have deployed multiple families of destructive wiper malware, including WhisperGate, on Ukrainian Government and private sector networks. “

“These disruptive cyber operations began in January 2022, prior to Russia's illegal further invasion of Ukraine and have continued throughout the war,” he said.

CNN has requested comment from the Russian Embassy in Washington.

Ukraine has killed between “eight and ten” Russian generals during the ongoing conflict in Ukraine, Lt. Gen. Scott Berrier, the head of the US Defense Intelligence Agency, told the Senate Armed Services Committee on Tuesday.

US officials have closely watched the climbing number of general officer deaths in the Russian military — an unusually high number for a modern military that far outstrips the number of US generals lost during 20 years of conflict in Afghanistan.

Some US officials have attributed that atypically high figure in part to the intelligence support provided by the United States, while others believe it is because Russian generals are being forced to operate far more forward in the conflict zone than would normally be expected in order to motivate their troops.

“Does the fact that Russia is losing all these generals suggest to you that these generals are having to go forward to ensure their orders are executed?” Arkansas GOP Sen. Tom Cotton asked.

Overall, Berrier said that Ukraine is better poised to field motivated soldiers in the conflict — even as its military is far smaller than the Russian force.

“I think the Ukrainians have it right in terms of grit and how they face the defense of their nation,” Berrier said. “I’m not sure that Russian soldiers from the far-flung Russian military districts really understand that.”

The United Nations General Assembly (UNGA) met on Tuesday to elect the Czech Republic to replace Russia on the Human Rights Council, with 157 votes in favor and 23 abstentions.

The Czech Republic’s term begins Tuesday and will expire on December 31, 2023. It was the only candidate announced to replace Russia.

On April 7, the UNGA voted to suspend Russia from the Human Rights Council with 93 votes in favor, 24 against, and 58 abstentions.

In the draft of the April 7 resolution, the UNGA said the General Assembly would “suspend the rights of membership in the Human Rights Council of a member of the Council that commits gross and systematic violations of human rights.”

US Treasury Secretary Janet Yellen said on Tuesday that Western sanctions have delivered a powerful blow to Russia’s economy following the invasion of Ukraine.

“Their economy is clearly in recession,” Yellen told lawmakers during a hearing on the Financial Stability Oversight Council’s annual report to Congress, adding that there are forecasts the Russian economy will contract by 10% to 15%.

Inflation in Russia is probably running around 20% this year, Yellen said. That would be more than double the 8.5% year-over-year jump in consumer prices in the United States in March.

“Russian firms that have been sanctioned are finding it almost impossible to gain access to goods and services that they need in global markets,” Yellen said, adding that this includes major defense firms that can’t find the computer chips and other components they need to restock their defense arsenals.

The war in Ukraine has disrupted supplies of food and energy, contributing to the highest level of inflation in decades. The average price of regular gasoline has increased about 25% to record highs since Russia invaded Ukraine in late February.

Yellen said financial regulators will continue to monitor developments and “coordinate actions as the risks and threats evolve.”