The Indian Embassy in Ukraine will return to the capital Kyiv on Tuesday, India's Ministry of External Affairs said on Friday.

“Glad to announce the return of the Embassy of India to Kyiv soon. The Embassy will resume its operation in Kyiv with effect from May 17, 2022,” the embassy said in a tweet.

The embassy was temporarily relocated to Warsaw, Poland, on March 13 amid an escalation in violence near the Ukrainian capital during Russia's invasion.

Retirees in occupied territories of the Donetsk region have yet to receive their pensions, Governor of Donetsk Oblast Pavlo Kirilenko said in a Facebook post on Saturday.

Kirilenko said he discussed the issue in a meeting with the Ukrainian Postal Service Director-General Ihor Smelyansky, and that about a third of retirees in Donetsk Oblast -- those living in occupied territories -- had not received their pensions due to problems in transferring cash to these areas.

The Ukrainian Postal Service delivers cash to the nearest post offices deemed safe but people in the occupied territories of Mariupol, Kalchytsk, Mangush, Nikolske, Sartanske, Volnovakha, Khlibodariv, Myrnenske, Olhynsk, and parts of Staromlyniv cannot access their funds, according to the governor.

"The transfer of cash to replenish ATMs located in the temporarily occupied territories and in some settlements where active hostilities are taking place has been suspended for the duration of the hostilities,” the governor said.
He said authorities are working together to "protect people's rights to receive benefits guaranteed by the Ukrainian government, even under the conditions of active hostilities."

Senate Minority Leader Mitch McConnell said Saturday that the Republican delegation he led to Ukraine had recently left the country and it was an "honor" to have met Ukrainian President Zelensky and his senior advisers.

Zelensky said earlier Saturday on his Instagram account that the GOP delegation visit was "a strong signal of bipartisan support for Ukraine from the United States Congress and the American people."

McConnell echoed the sentiment saying "our delegation reaffirmed to President Zelensky that the United States stands squarely behind Ukraine and will sustain our support until Ukraine wins this war. It is also essential that America not stand alone."

The trip comes as GOP Senator Rand Paul stalled a $40 billion bill that would aid Ukraine in combatting Russia. The Senate is expected to pass the bill sometime next week.

“Our bravery is impressing the world, our music is conquering Europe!" Zelensky said In a Facebook post early Sunday morning.
"Next year Ukraine will host the Eurovision! For the third time in its history, and I am sure it won't be the last. We will try our best to host the participants and guests of Eurovision in Ukrainian Mariupol. Free, peaceful, rebuilt! Thank you Kalush Orchestra for winning and everyone who voted for us!”
“I'm certain that we will conquer the enemy with a triumphant chord!” Zelensky added.

After the band's victory was announced, frontman Oleg Psyuk said in English: “Thank you so much. Thank you for supporting Ukraine. This victory is for every Ukrainian."

“Glory to Ukraine!” he added in Ukrainian.

At the end of the band’s initial performance of their song “Stefania,” prior to the announcement of the winner, Psyuk said on stage, “I ask all of you, please help Ukraine, Mariupol, help Azovstal, right now.”

In a symbolic victory more than three months after the Russian invasion, Ukraine took top honors in this year's Eurovision Song Contest.

The annual songwriting and performance competition is often viewed as an opportunity to celebrate a diverse range of musical styles, appreciate its sometimes kitschy presentations, and to feel national pride. The winner is voted on by panels of professional musicians and television viewers across Europe, although the audience cannot vote for their own country's entrant.

The participants are admonished to refrain from political themes, however, the popular sentiment of the day can swing votes and Ukraine had been acknowledged as a favorite in this year's contest.

"Our courage impresses the world, our music conquers Europe!" he said in the post. Alluding to the rule that a winner of the previous year's competition gets to host the contest, he said: "Next year Ukraine will host Eurovision! For the third time in its history. And I believe - not the last. We will do our best to one day host the participants and guests of Eurovision in Ukrainian Mariupol. Free, peaceful, rebuilt!"

Kalush is the name of the city where singer Oleh Psyuk grew up, in the foothills of the Carpathian Mountains about 375 miles west of Kyiv.

The folk-rap group initially finished second in Ukraine's national selection competition, but they were elevated after it emerged the initial winner had previously traveled to Russian-annexed Crimea. They were unveiled as the country's entry on February 22, two days before Russian troops invaded Ukraine.

"As we speak, our country and our culture is under threat. But we want to show that we are alive, Ukrainian culture is alive, it is unique, diverse, and beautiful," Oleg Psyuk, the band's frontman, told CNN earlier.

Eurovision is among the world's most-watched events not including sports, with hundreds of millions of viewers, and it often launches or reignites the careers of songwriters, artists and featured songs thanks to such wide exposure.

Ukrainian President Volodymyr Zelensky met with US senators Saturday, and called for Russia to be officially recognized as a "terrorist state," he said in his nightly address.

"I held talks today with a delegation of US senators led by Senate Republican Minority Leader Mitchell McConnell in Kyiv," he said. "I believe that this visit once again demonstrates the strength of bipartisan support for our state, the strength of ties between the Ukrainian and American nations."

Discussions of US support for Ukraine and tightening sanctions on Russia also took place during the meeting, according to Zelensky.

"I expressed gratitude for the historic decision to renew the Lend Lease program. I called for the official recognition of Russia as a terrorist state," Zelensky said.

US President Joe Biden signed into law the Ukraine Democracy Defense Lend-Lease Act of 2022 on May 9. The new law, which eases some requirements for the US to lend or lease military equipment to Ukraine, passed with a bipartisan majority in the US House and Senate. Its sponsors said the legislation gives Biden much broader authority to help Ukraine defend itself against Russia and addresses how the US can get weapons to Ukraine faster.

The Ukrainian president also highlighted in his nightly address food security, an issue he said he deals with on a "daily basis."

"More and more countries around the world are realizing that Russia, by blocking the Black Sea for us and continuing this war, puts dozens of other countries at risk of a price crisis in the food market and even famine," Zelensky said. "This is another incentive for our anti-war coalition to act more decisively together," he said.

Russia has to take responsibility for the damages caused by its war in Ukraine, German Foreign Minister Annalena Baerbock said during the concluding press conference following the G7 Foreign Ministers meeting in Berlin Saturday.

Accessing Russian money frozen by sanctions to pay for damages incurred by the Russian war is legally possible in Canada, as the Canadian Foreign Minister Melanie Joly pointed out on Saturday. Baerbock explained that Europe's legal framework made it more difficult to make use of the seized assets.

“Access to frozen money is legally anything but simple," Baerbock said.

“When we put people on sanctions lists, we have to and had to provide explanations for them, so that they are also valid before the European Court of Justice," she said. "And that applies all the more to this path, if we were to take it — for which there are some good reasons. It must of course be such that it stands up before our law; we are defending international law."

A luminous dot approaches in the distance somewhere in the middle of Latvia.

It’s around midnight and it’s pitch black, but the special forces aircraft is going to attempt a landing in the darkness on a two-lane civilian road.

Equipped with night vision goggles, pilots and ground staff are able to coordinate and successfully land the aircraft.

It’s part of medical training that US and NATO special forces are doing in the Baltic region, implementing practices they have been learning from the conflict in Ukraine.

The main lesson they have learned is that air superiority may be a thing of the past, and air evacuations using fast-moving helicopters might not be possible.

“Look at the battlefield now, look at Ukraine. What’s flying? Not a lot reliably,” a member of NATO’s special forces told CNN, on condition that they remain anonymous for security reasons. “The assumption is, if the air is denied, where is that patient going to go? How are we going to transport him to the surgeon?”

That means it could take longer to get wounded soldiers to hospitals and operations may need to be performed on or near the front line.

“The spirit of what we are doing is called prolonged casualty care, prolonged field care,” the special forces service member explained. “And the concept is identifying those strategies that will help us prolong life in order to bridge that and get that patient to the surgeon.”

Some of the lessons from the war in Ukraine have also been learned by watching how medics have been operating on the battlefield, sometimes still under heavy fire.

“The Ukrainians have been doing a phenomenal job of claiming the battlefield and of implementing some of these strategies, taking care of their patients en route,” the special forces service member said. “They are not just throwing a person in the back of a van and leaving them unattended. You’re putting somebody with medical capability in there with that patient while they are being transferred — that’s that concept of en-route care.”

As they watch events unfold nearby, they say it’s exactly the right time to prepare for the war of the future.

“There’s a sense of urgency, and I think, watching Ukraine right now, that is very prescient,” the member of the special forces said. 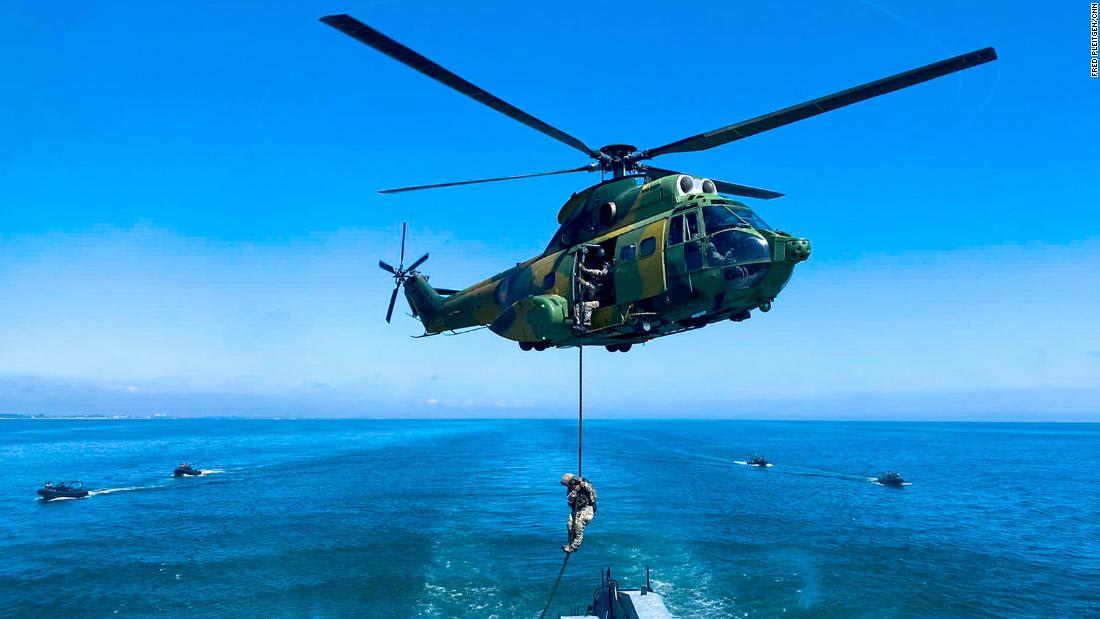