Ukrainian officials have reported missile attacks and shelling in several regions, as Russian forces focus their efforts on the frontlines in Luhansk. But they claim further successes in the Kharkiv region.

A rare missile strike was reported in the western Lviv region.

Serhiy Hayday, head of the Luhansk regional military administration, said early Sunday that the "Russians are gathering equipment and manpower closer to Severodonetsk and preparing to attack it."

Severodonetsk is one of several industrial towns in the east that have seen relentless bombardment for weeks as Russian forces try to break down Ukrainian defenses.

Hayday said the city's chemical plant and high-rise buildings had been hit.

There is a lot of destruction: 11 high-rise buildings in the new and old districts of the city (were hit), in several of them apartments caught fire."

Several settlements to the south and west of Severodonetsk were also hit — including Vrubivka and Komyshuvakha — Hayday said.

Russian forces are expected to advance further west if they can secure Severodonetsk, where 15,000 people are still living. Most residents have been evacuated.

Ukraine has provided few details about its counter-offensive in the Kharkiv region, where its troops have made significant advances to the north and east towards the Russian border. The aim of the Ukrainian offensive is to cut Russian supply lines to its forces trying to advance into the Donetsk region.

The armed forces General Staff said Sunday only that "in the Kharkiv direction, enemy units did not conduct active hostilities."

However, Oleh Syniehubov, head of the Kharkiv regional military administration, said Ukrainian units "are constantly strengthening their positions, pushing the enemy from the borders of the city of Kharkiv to the borders of the Russian Federation. The northern and north-eastern directions are the hottest; there are active hostilities there."
He said the city of Kharkiv "has been relatively quiet for several days now, there has been no shelling of the city itself. About 2,000 people return to Kharkiv every day, and the number is growing every day."

This is partly because the city is now beyond the reach of many Russian artillery and rocket systems.

But further south, according to Syniehubov, several towns had come under fire.

He said that "the enemy is constantly checking the positions of our armed forces near Barvinkove, trying to break through but has no success. The enemy suffered heavy losses of manpower and equipment."

The General Staff also said that Russian forces were intensifying efforts in this area, reporting that "the enemy tried to break through the defenses of our troops but was unsuccessful. It continues the regrouping of troops to resume the offensive in the direction of Barvinkove and Sloviansk," two key goals for Russian forces in the region.

Elsewhere, the General Staff reported further air strikes on the Chernihiv and Sumy regions of northern Ukraine. Dmytro Zhyvytskyy, head of the Sumy region military administration, said rockets and airstrikes overnight had damaged border villages but there had been no casualties.

On the southern front, regional authorities say the Russians have begun digging trenches in some front-line positions.

The Zaporizhzhia regional military administration said the Russians "are digging trenches along the Molochna River" while continuing to shell towns in the area.

In the western Lviv region, close to the Polish border, Maksym Kozytskyi, head of the Lviv regional military administration, said "four enemy missiles hit a military infrastructure facility in the Yavoriv district, near the border with Poland. The object is completely destroyed."

Kozytskyi did not specify the target, but a previous missile attack in Yavoriv targeted training grounds where some foreign fighters were present.

A convoy of 500-1,000 cars containing people evacuated from Mariupol entered the southeastern Ukrainian city of Zaporizhzhia on Saturday, Petro Andryushchenko, aide to Mariupol's mayor, said on his telegram channel.

The convoy had been waiting for more than three days to be allowed to enter Zaporizhzhia, he said.

More than a month after the Ukrainian army retook Irpin from the Russians, Volodymyr Klimashevskyi is still finding the little nail-like projectiles scattered around his garden and embedded deep in the walls of his house.

You can't take them out with your hands, you need to use pliers," Klimashevskyi said, pointing to the wall dotted with the dark darts.

Called flechettes -- French for "little arrows" -- these razor-sharp, inch-long projectiles are a brutal invention of World War I when the Allies used them to strike as many enemy soldiers as possible. They are packed into shells that are fired by tanks. When the shell detonates, several thousands of the projectiles are sprayed over a large area.

Flechette shells are not banned, but their use in civilian areas is prohibited under humanitarian law, because of their indiscriminate nature. They cause severe damage as they rip through the body, twisting and bending -- and can be lethal. 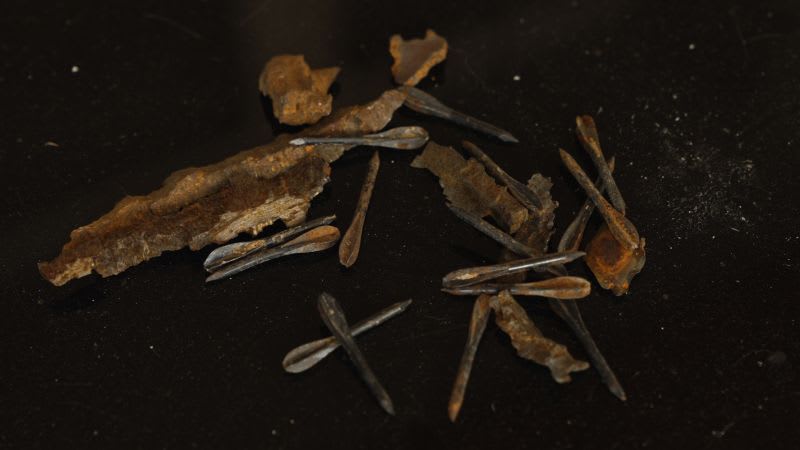 NATO foreign ministers are meeting in Germany, while Finland and Sweden make moves to join the US-led military alliance.

Here are the latest headlines from Russia's invasion in Ukraine.

The Indian Embassy in Ukraine will return to the capital Kyiv on Tuesday, India's Ministry of External Affairs said on Friday.

“Glad to announce the return of the Embassy of India to Kyiv soon. The Embassy will resume its operation in Kyiv with effect from May 17, 2022,” the embassy said in a tweet.

The embassy was temporarily relocated to Warsaw, Poland, on March 13 amid an escalation in violence near the Ukrainian capital during Russia's invasion.

Senate Minority Leader Mitch McConnell said Saturday that the Republican delegation he led to Ukraine had recently left the country and it was an "honor" to have met Ukrainian President Zelensky and his senior advisers.

Zelensky said earlier Saturday on his Instagram account that the GOP delegation visit was "a strong signal of bipartisan support for Ukraine from the United States Congress and the American people."

McConnell echoed the sentiment saying "our delegation reaffirmed to President Zelensky that the United States stands squarely behind Ukraine and will sustain our support until Ukraine wins this war. It is also essential that America not stand alone."

The trip comes as GOP Senator Rand Paul stalled a $40 billion bill that would aid Ukraine in combatting Russia. The Senate is expected to pass the bill sometime next week.

In a symbolic victory more than three months after the Russian invasion, Ukraine took top honors in this year's Eurovision Song Contest.

The annual songwriting and performance competition is often viewed as an opportunity to celebrate a diverse range of musical styles, appreciate its sometimes kitschy presentations, and to feel national pride. The winner is voted on by panels of professional musicians and television viewers across Europe, although the audience cannot vote for their own country's entrant.

The participants are admonished to refrain from political themes, however, the popular sentiment of the day can swing votes and Ukraine had been acknowledged as a favorite in this year's contest.

"Our courage impresses the world, our music conquers Europe!" he said in the post. Alluding to the rule that a winner of the previous year's competition gets to host the contest, he said: "Next year Ukraine will host Eurovision! For the third time in its history. And I believe - not the last. We will do our best to one day host the participants and guests of Eurovision in Ukrainian Mariupol. Free, peaceful, rebuilt!"

Kalush is the name of the city where singer Oleh Psyuk grew up, in the foothills of the Carpathian Mountains about 375 miles west of Kyiv.

The folk-rap group initially finished second in Ukraine's national selection competition, but they were elevated after it emerged the initial winner had previously traveled to Russian-annexed Crimea. They were unveiled as the country's entry on February 22, two days before Russian troops invaded Ukraine.

"As we speak, our country and our culture is under threat. But we want to show that we are alive, Ukrainian culture is alive, it is unique, diverse, and beautiful," Oleg Psyuk, the band's frontman, told CNN earlier.

Eurovision is among the world's most-watched events not including sports, with hundreds of millions of viewers, and it often launches or reignites the careers of songwriters, artists and featured songs thanks to such wide exposure.

Ukrainian President Volodymyr Zelensky met with US senators Saturday, and called for Russia to be officially recognized as a "terrorist state," he said in his nightly address.

"I held talks today with a delegation of US senators led by Senate Republican Minority Leader Mitchell McConnell in Kyiv," he said. "I believe that this visit once again demonstrates the strength of bipartisan support for our state, the strength of ties between the Ukrainian and American nations."

Discussions of US support for Ukraine and tightening sanctions on Russia also took place during the meeting, according to Zelensky.

"I expressed gratitude for the historic decision to renew the Lend Lease program. I called for the official recognition of Russia as a terrorist state," Zelensky said.

US President Joe Biden signed into law the Ukraine Democracy Defense Lend-Lease Act of 2022 on May 9. The new law, which eases some requirements for the US to lend or lease military equipment to Ukraine, passed with a bipartisan majority in the US House and Senate. Its sponsors said the legislation gives Biden much broader authority to help Ukraine defend itself against Russia and addresses how the US can get weapons to Ukraine faster.

The Ukrainian president also highlighted in his nightly address food security, an issue he said he deals with on a "daily basis."

"More and more countries around the world are realizing that Russia, by blocking the Black Sea for us and continuing this war, puts dozens of other countries at risk of a price crisis in the food market and even famine," Zelensky said. "This is another incentive for our anti-war coalition to act more decisively together," he said.

Russia has to take responsibility for the damages caused by its war in Ukraine, German Foreign Minister Annalena Baerbock said during the concluding press conference following the G7 Foreign Ministers meeting in Berlin Saturday.

Accessing Russian money frozen by sanctions to pay for damages incurred by the Russian war is legally possible in Canada, as the Canadian Foreign Minister Melanie Joly pointed out on Saturday. Baerbock explained that Europe's legal framework made it more difficult to make use of the seized assets.

“Access to frozen money is legally anything but simple," Baerbock said.

“When we put people on sanctions lists, we have to and had to provide explanations for them, so that they are also valid before the European Court of Justice," she said. "And that applies all the more to this path, if we were to take it — for which there are some good reasons. It must of course be such that it stands up before our law; we are defending international law."