The Russian Defense Ministry said Thursday that 771 Ukrainian soldiers have surrendered at the Azovstal steel plant in Mariupol in the last 24 hours, taking the total to 1,730 since Monday.

The ministry said 80 of those were wounded, and all those in need of any medical attention are receiving treatment in hospitals in Novoazovsk and Donetsk.

It follows the end of Ukrainian forces' "combat mission" at the complex, which was for weeks the last major holdout in a city otherwise occupied by Russian troops.

Ukraine said it expects to carry out an exchange of Russian prisoners of war for the severely injured soldiers. 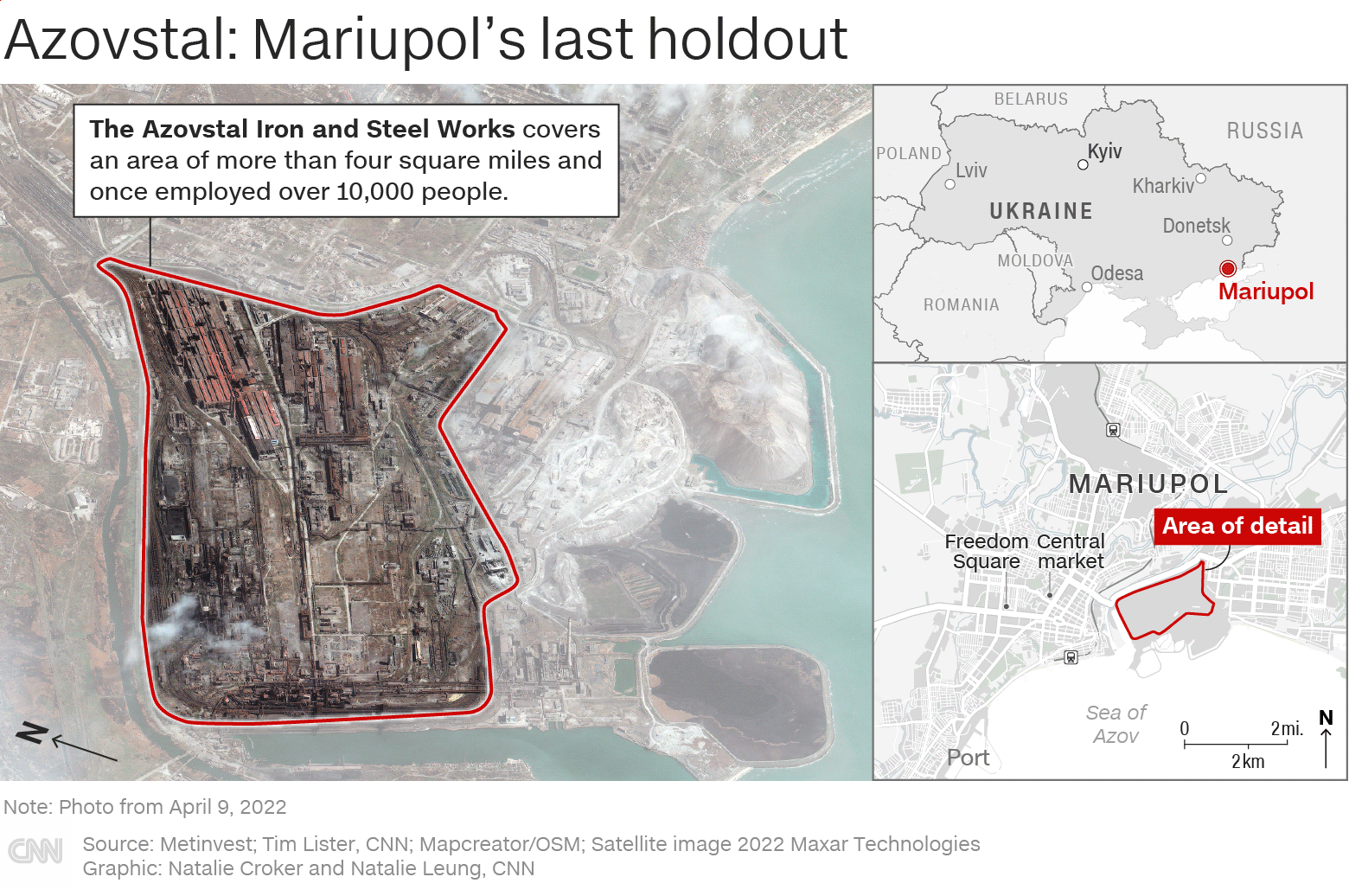 One civilian was killed and several people were wounded as a result of Ukrainian strikes in Russia’s western region of Kursk at dawn on Thursday, according to regional governor Roman Starovoit.

The strikes hit an ethanol factory in the village of Tyotkino and several homes were affected, Starovoit said on Telegram.

Tyotkino is located 1.5 miles (2.4 kilometers) from the Ukraine-Russia border. Both sides of the border between Kursk and Ukraine have seen intermittent artillery attacks this month.

The Ukrainian military reported on Thursday that Russian forces trying to break through to Sloviansk, in eastern Ukraine's Donetsk region, had suffered losses and retreated.

Despite artillery and missile attacks by Russian forces on a wide front over the past 24 hours, there are no signs they have taken new territory.

"The enemy conducted battle activity in Velyka Komyshuvakha area with the support of artillery; had no success, suffered significant losses in some areas and was forced to withdraw to previously occupied positions," the General Staff of the Ukrainian armed forces claimed in its daily update.

There has been fighting in the Velyka Komyshuvakha area since late April — since the Russians took control of Izium and tried to push toward Sloviansk — but the front lines have changed little.

In Luhansk: On the other main front, in the parts of Luhansk region the Ukrainians still hold, Russian aircraft have attacked several villages, according to the General Staff.

Ukrainian defenses were holding around the industrial city of Severodonetsk, and Russian assault operations in the Zolote area had been unsuccessful, it said.

Serhii Hayday, head of the Luhansk military administration, said Severodonetsk had suffered the most in the latest attacks and confirmed that four civilians were killed on Wednesday.

Elsewhere: Other regions also reported Russian artillery and missile strikes overnight. In the Dnipropetrovsk region in the south, the city military administration in Kryvih Rih said "there was enemy shelling along the entire line of contact during the night."

It said there had been heavy shelling of residential areas of Velyka Kostromka, a town that lies some 20 miles south of Kryvih Rih that has been on the front lines for more than a month.

President Joe Biden is scheduled to meet with the leaders of Finland and Sweden on Thursday as part of a show of support by the United States after the two nations submitted their formal applications to become NATO members.

White House national security adviser Jake Sullivan told reporters on Wednesday that the meeting with Finnish President Sauli Niinistö and Swedish Prime Minister Magdalena Andersson in Washington will allow the three nations “to coordinate on the path forward” and “compare notes” on the move.

Sweden and Finland’s bids to join NATO come in response to Russia’s war on Ukraine, which sparked security concerns across the region. Their bids to join the alliance mark a dramatic evolution in European security and geopolitics. 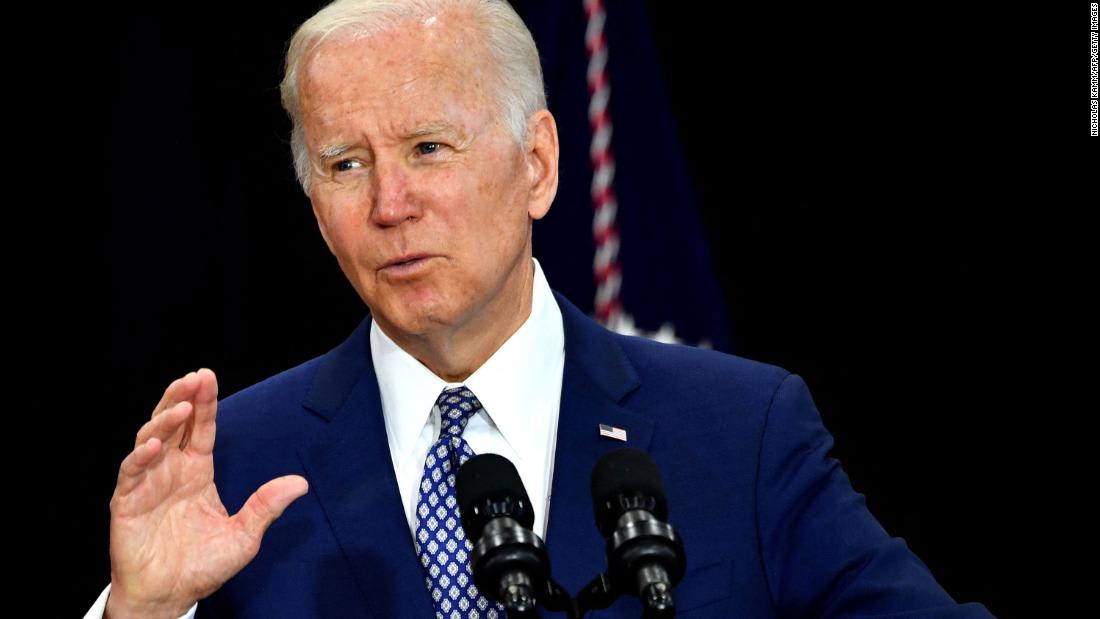 The Russian Foreign Ministry said more than 900 Ukrainian soldiers who surrendered at the Azovstal steel plant in Mariupol since May 16 have been sent to a pretrial detention center.

Ministry spokesperson Maria Zakharova said on Wednesday that a total of 959 Ukrainian soldiers, including 51 with severe wounds, had surrendered over the course of two days.

She reaffirmed the injured are receiving treatment at the hospital at Novoazovsk in the self-declared Donetsk People’s Republic (DPR), while the others were sent to a pretrial detention center in Olenivka, a town near the front lines but in territory controlled by the DPR.

Amnesty International has said Ukrainian soldiers who surrendered at the steel plant must not be ill-treated and should receive immediate access to the International Red Cross.

"The relevant authorities must fully respect the rights of prisoners of war in accordance with the Geneva conventions," said Denis Krivosheev, Amnesty’s deputy director for Eastern Europe and Central Asia.

President Joe Biden departs Thursday on an alliance-boosting visit to Asia, a belated first trip to a region that remains central to his foreign policy goals even as his focus has been drawn away.

Biden’s stops in two staunch US allies — South Korea and Japan — are meant to bolster partnerships at a moment of global instability. While Biden and his team have spent much of their time and resources on Russia’s invasion of Ukraine, provocations from North Korea have intensified and China continues to flex its economic and military might.

Realigning US foreign policy: After months of all-consuming attention on Russia’s war in Ukraine — a conflict that has summoned Cold War comparisons and revitalized alliances built last century — Biden’s debut visit to Asia is an opportunity to renew what he views as this century’s challenge: Confronting a rising China through a system of renewed economic and military partnerships.

And even as Russia’s war grinds on, tensions have been building elsewhere. 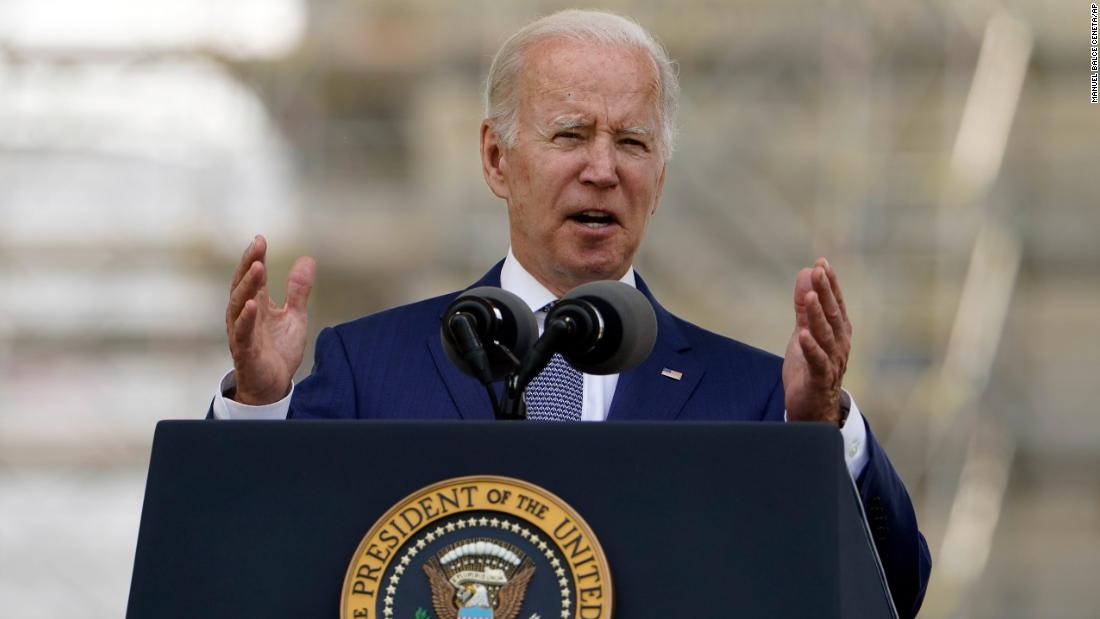 The most striking aspect of Sweden and Finland’s application to join NATO is how little debate there is about whether it’s a wise idea.

The entry of the two Nordic nations would be the most significant geopolitical outcome of the Ukraine war, transforming the strategic security picture in northeastern Europe and adding hundreds of miles of direct NATO borders with Russia.

Doubling the security alliance’s direct frontier with Russia would be a personal blow for Vladimir Putin, who has focused on undermining the Western alliance since he first became Russia’s President, more than 20 years ago.

And if Putin felt Russia was already being hemmed in on its western flank, could adding two more NATO members during the worst tension between the West and Moscow in decades exacerbate the Russian leader’s paranoia? 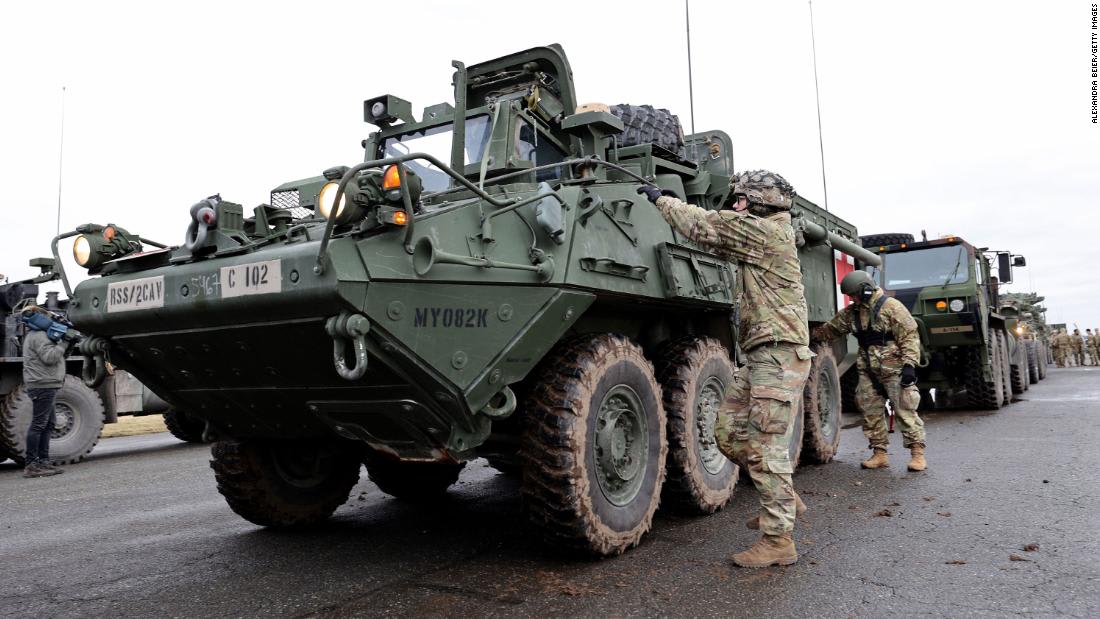 NATO doesn't expect significant gains for either side on the battlefield in Ukraine in the coming weeks. "I think we'll be in a standstill for a while," a NATO military official with knowledge of the intelligence said.

Here's the latest on the war in Ukraine: 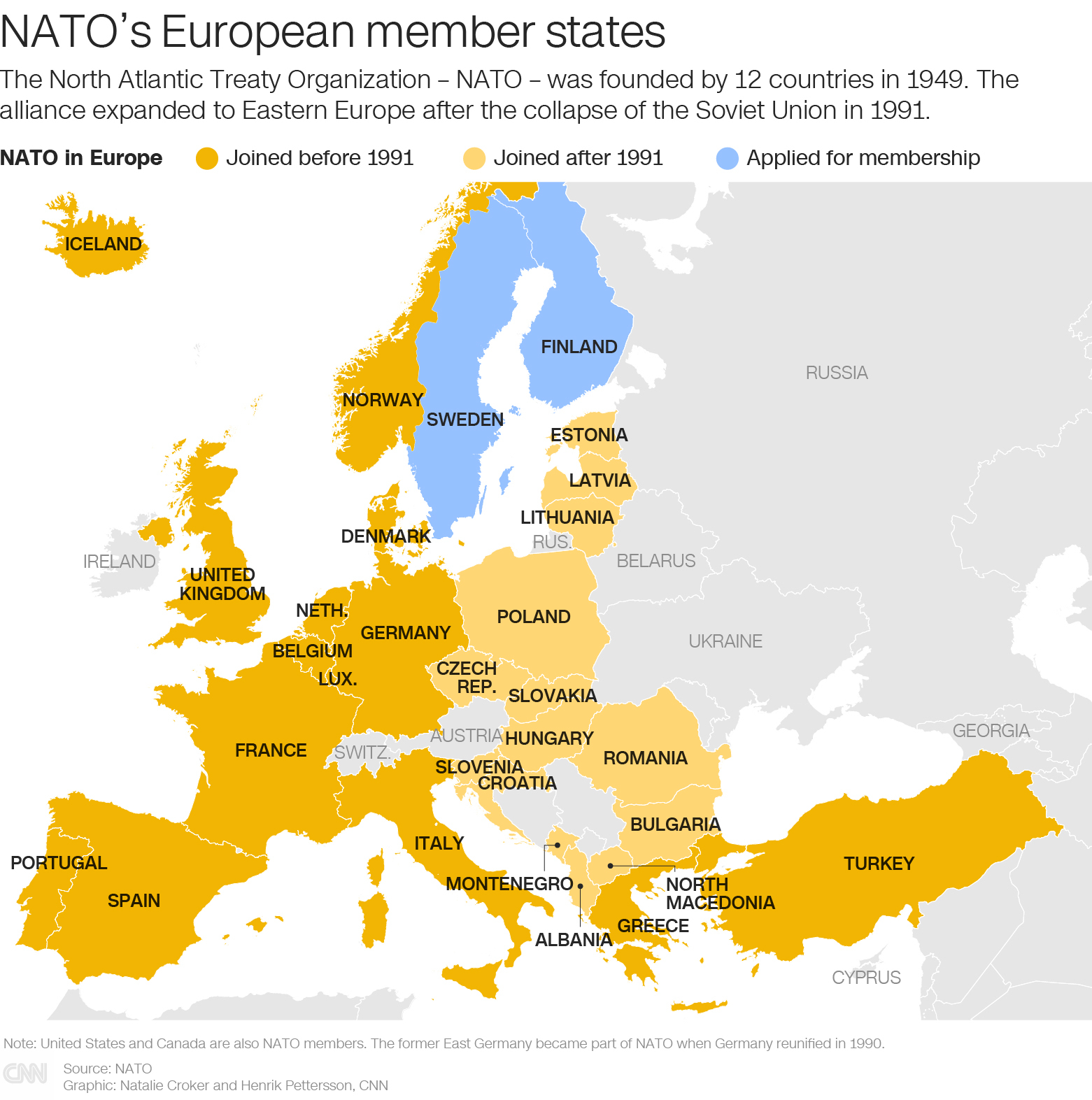 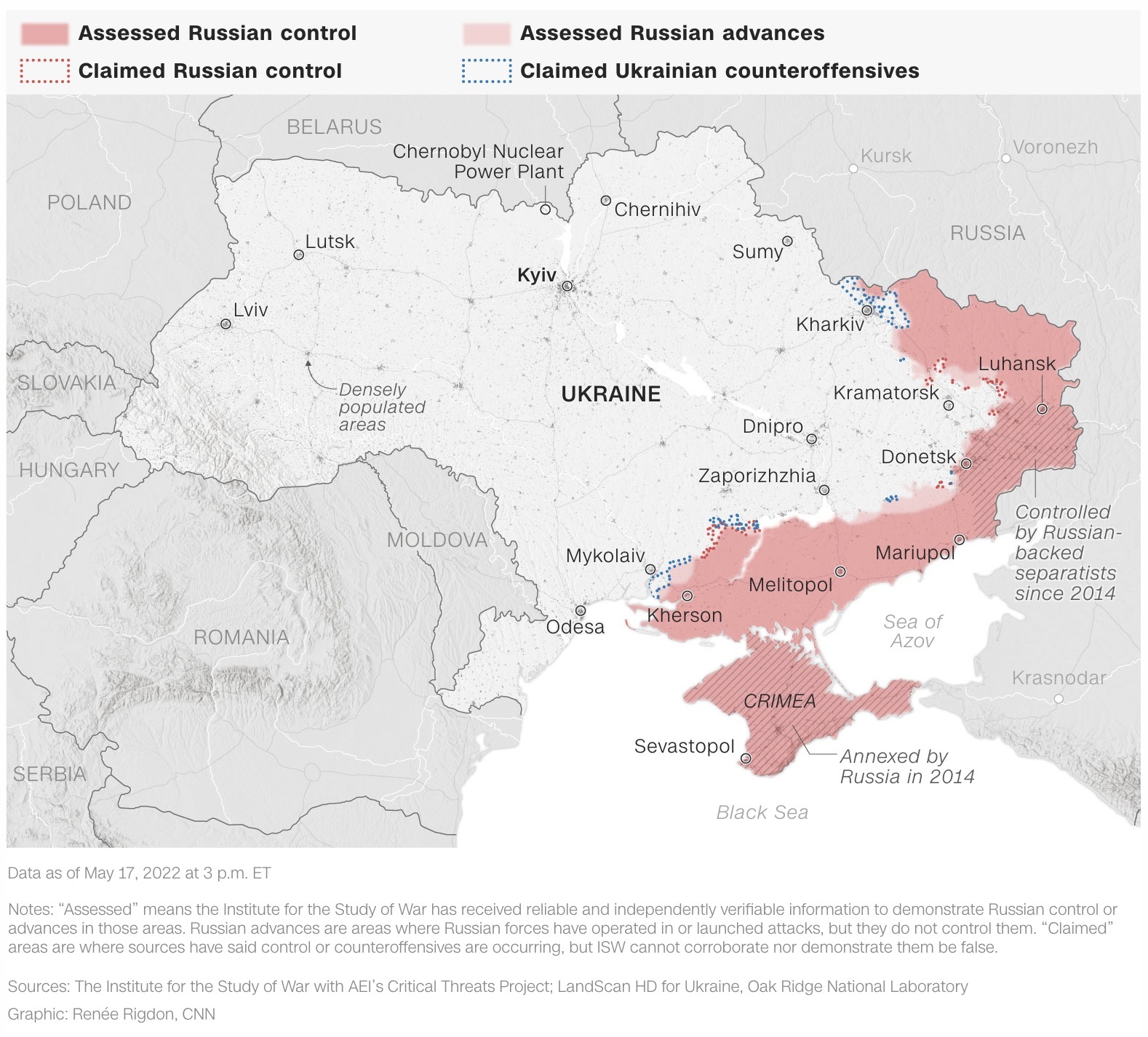 Retired Russian colonel Mikhail Khodarenok said any talk about Ukraine being able to counterattack is a "big exaggeration," just a day after he criticized Russia's military operations in Ukraine saying the situation for Russia could "get worse."

Speaking to a Russian state TV channel on Wednesday, Khodarenok said, "When people talk about Ukraine acquiring the ability to counterattack, well it's a big exaggeration. And as concerns the actions of our supreme command, there is every reason to believe that the implementation of these plans will in the very near future give Ukraine an unpleasant surprise."

On Tuesday however, Khodarenok said information being spread about a "moral or psychological breakdown" of Ukrainian armed forces is not even "close to reality." He also said Ukraine could arm 1 million people, and that Russia needs to consider that in its operational and strategic calculations.

"The situation for us, will frankly get worse," he said on Tuesday. He also criticized Russia's geopolitical isolation from the world, and prior to the invasion he warned that it would be more difficult than many anticipated to wage war in Ukraine.