“We told relevant friends that we will say no to Sweden’s and Finland’s entry into NATO and we will continue our path like that,” Erdogan said during a conference with students in Ankara.

“NATO is a security organization and we cannot accept the presence of terrorists organizations in there,” he said. Earlier this week Erdogan accused both countries of housing Kurdish “terrorist organizations."

Erdogan was mainly referencing the Kurdistan Workers' Party (PKK) which seeks an independent state in Turkey. The group has been in an armed struggle with Ankara for decades and has been designated a terrorist organization by Turkey, the United States and the European Union.

Finland and Sweden have a Kurdish community, although Erdogan provided no detail as to whom he was referring.

Both Nordic countries formally applied to join NATO on Wednesday, a decision prompted by Russia's invasion of Ukraine.

Kremlin spokesman Dmitry Peskov said Thursday that the future of the regions in Ukraine occupied by Russia will depend on the "will" of the people living there.

"All actions have their forerunner, the forerunner of any action can only be the expression of the will of the inhabitants of these regions," Peskov said during his daily call with reporters.

"Nothing can be done without expressing the will of the inhabitants of these areas, without them deciding how to go on and with whom they want to live," he added.

Peskov said that humanitarian reasons also dictate the control of the Ukrainian territories occupied by the Russian army.

"Many areas are now without electricity, sewerage and water. And this needs to be taken care of. The need for these priority measures is dictated solely by concern for people," he said.

Some background: Last week, Ukrainian President Volodymyr Zelensky said Ukraine had retaken six settlements from Russian forces on Friday, and 1,015 overall since the start of the conflict in February.

In the Russian-occupied region of Kherson, in southern Ukraine, hundreds -- sometimes thousands -- of people have been trying to flee every day.

They are leaving for many reasons: To avoid being detained or to escape the heavy-handed actions of Russian forces, or because of the chronic shortages of medicine and other basics in Kherson, which fell under Russian control soon after the invasion.

“Spoke with Foreign Minister Lavrov about Russia’s participation in global health matters, work with the WHO and the health situation in Ukraine,” Tedros said on Twitter.

“I requested safe access to Mariupol, Kherson, Southern Zaporizhzhia and other besieged areas to deliver health aid,” he added.

As of May 10, WHO has verified 200 attacks on healthcare facilities in Ukraine since the start of the war, Tedros said, urging Russia "to stop this war."

Speaking from Kyiv on May 10 after spending two days in Ukraine, Tedros said he had been "deeply moved" by what he has seen and heard.

A cat from Kharkiv who has raised thousands of dollars through his Instagram account for Ukrainian animal shelters has received an international award.

Stepan, who now has 1.3 million followers, received the World Influencers and Bloggers Awards in France.

Stepan and his owner Anna are from Kharkiv. One week after Russia's invasion of Ukraine, they were evacuated from the Saltivka area, which was heavily bombarded.

They are currently in France, but the tabby cat is still raising funds to support Ukraine's animal shelters and zoos.

Stepan first went viral for images and videos of him sitting with his arm resting on a table next to a glass of wine or cocktail with disco lights in the background — and he looked wholly unimpressed in every situation.

The UK government will introduce new sanctions against Russian airlines to prevent them from cashing in on their unused landing slots at British airports.

"State-owned Aeroflot, Russia’s largest airline, Ural Airlines and Rossiya Airlines will now be unable to sell their unused, lucrative landing slots at UK airports -- preventing Russia from cashing in on an estimated £50 million (about $61 million)," the UK Foreign Office said Thursday in a press release.

"Every economic sanction reinforces our clear message to Putin -- we will not stop until Ukraine prevails," she added.

Last week, Truss called for international allies to impose more sanctions against Russia until it completely withdraws from Ukraine and agrees to peace.

She urged sanctions on Russia not be lifted until those demands are met.

The first Russian soldier on trial for war crimes in Ukraine, Vadim Shishimarin, told a widow at a Kyiv court on Thursday that he is "sorry" for killing her husband during the war.

"Yes I acknowledge my fault. I understand that you will not be able to forgive me, but I am sorry," Shishimarin said.

When asked if Shishimarin repented for what he did, he replied: "Yes, I acknowledge my fault."

He also said he felt "shame."

The woman questioned the Russian soldier as to why he came to Ukraine, asking rhetorically: "Did you come to defend us? From whom? Did you defend me from my husband you killed?"

"We were ordered to come with the column, what will follow I did not know," Shishimarin said.

Some background: This is the first Ukrainian war crimes trial held since Russia invaded the country on February 24.

The 21-year-old soldier pleaded guilty Wednesday to shooting an unarmed 62-year-old civilian in Ukraine’s Sumy region on the fourth day of the war and is facing a life sentence.

The trial was adjourned on Wednesday because too many members of the media were crowding the courtroom. The trial has been moved to a larger Kyiv court.

Switzerland is reopening its embassy in Kyiv after two and a half months of temporary closure, a statement from the Swiss department of foreign affairs said Thursday.

The statement said the decision was made jointly by the President of the Swiss Confederation, Ignazio Cassis, and the head of the Federal Department of Foreign Affairs (FDFA) and is based off an "in-depth analysis of the security situation" in Kyiv.

Five FDFA staff will be returning to Kyiv over the "next few days," the statement added.

The embassy has been closed since February 28 -- four days after Russia began its invasion of Ukraine.

"During the first phase, Ambassador Claude Wild will return with a team of four transferable staff," the statement said.

"The Swiss embassy will continue to employ the local Ukrainian staff."

The statement added that if the situation deteriorates and an emergency arises, the team must be able to leave the country at short notice.

On Wednesday, the US flag was raised over the United States Embassy in Kyiv to mark the official resumption of US Embassy operations in the Ukrainian capital. 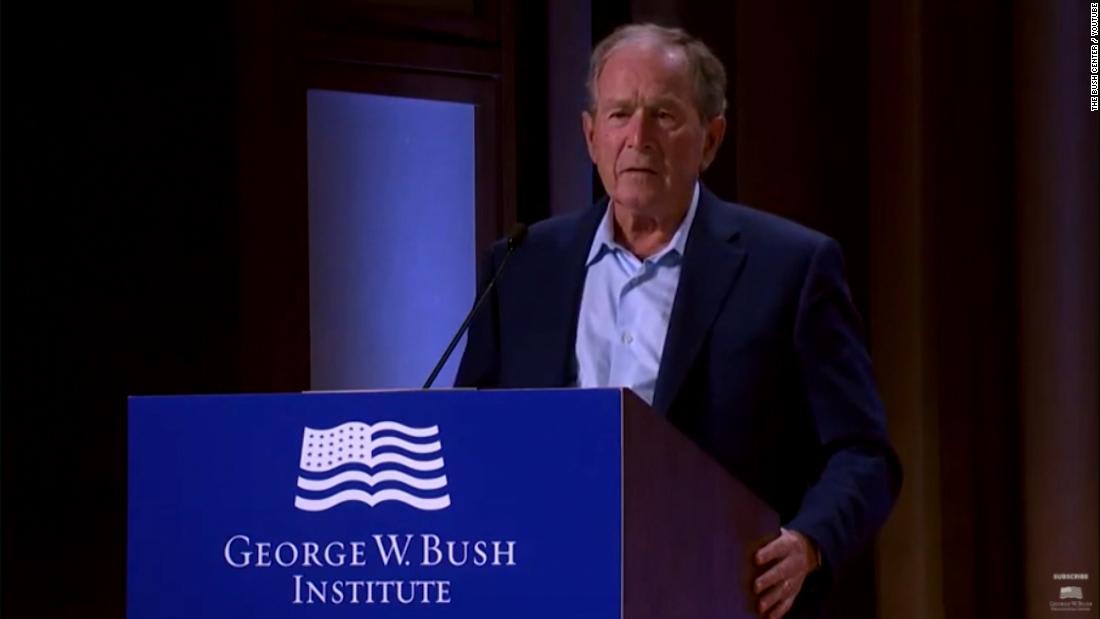 Former US President George W. Bush appeared to get his 21st century wars mixed up on Wednesday, accidentally calling the 2003 US invasion of Iraq "wholly unjustified and brutal," before saying he actually meant the Russian invasion of Ukraine.

Bush was speaking at an event at the George W. Bush Institute in Dallas, Texas.

"Russian elections are rigged. Political opponents are imprisoned or otherwise eliminated from participating in the electoral process.

"The result is an absence of checks and balances in Russia. And the decision of one man to launch a wholly unjustified and brutal invasion of Iraq, I mean of Ukraine," Bush said.

"Iraq, too," he added under his breath, chuckling.

Bush also called Ukrainian President Volodymyr Zelensky a "cool little guy" and "the Churchill of the 21st century" during his speech.

"He was empowered by electoral legitimacy," Bush added.

"And now he's leading his nation heroically against Russian invading forces, and defending his country."

About 70 people in the Crimean capital have defied official warnings to commemorate the victims of Stalin’s mass deportation of the Tatar people in 1944.

They braved heavy rain and the risk of retribution to attend a memorial event at a plaque near the railway station in Simferopol, carrying flags and, in some cases, the Ukrainian colors in the shape of a bracelet or lapel pin.

Half the Crimean Tatar, a Sunni Muslim people, are thought to have died during their forced removal to remote parts of the Soviet Union; their descendants speak of the deportation as genocide.

But for the past eight years, since Russia annexed Crimea, they have been refused permission to commemorate the horror.

The Kharkiv Human Rights Group, which investigates abuses throughout Ukraine, says that this year Tatar activists received warnings from Russian officials in Crimea about "the inadmissibility of extremist activities."

But the event went ahead, with the elderly making up the majority of attendees.

One young man who attended said that, before the Russian annexation of Crimea in 2014, as many as 50,000 people would converge on the main square in Simferopol to mark the anniversary.

Many of them had returned to their homeland after the fall of the Soviet Union and the Tatar community had flourished again.

CNN is not naming the man for his own safety.

"It was prohibited to make such demonstrations in recent years," he told CNN, and gradually the numbers turning out had fallen.

"People are going in small groups to the mosques, cemeteries, and memorials," he said.

But he had wanted to come to the event in Simferopol, to "get together in a crowd with our flags, pray together and commemorate this tragedy, because it moves the soul."

About 200 Tatars gathered in Büyük Onlar (named by the Soviets as Oktyabrskoe) where a prayer was said in the rain and children read poems.

The anniversary was also marked by the Ukrainian government, which drew parallels with Russia’s ongoing invasion.

President Volodymyr Zelensky signed legislation "for the protection of all ordinary peaceful, civilian people who were repressed by the occupiers and who were taken prisoner by them."

Tamila Tasheva, Zelensky’s representative to Crimea, said: "We cannot help but draw parallels to 1944. Current crimes have a long history ... Crimean Tatars are no longer put in freight cars and taken out by force, but [the Russians] create conditions for us to leave our historical homeland."

Those Tatars who do protest or promote the Crimean identity often find themselves in court.

According to the human rights group Crimea SOS, nearly 100 Tatars are victims of politically-motivated criminal prosecution; many of them are serving long jail sentences.

Eskender Bariiev, a leading Crimean Tatar activist, says the historical parallels of 1944 with today are unmistakable.

"The Crimean Tatar people were accused of collaborating with the Nazis and [Stalin] conducted a special operation, thus deporting Crimean Tatars from Crimea," Bariiev said this week.

"Now under the slogans of denazification and demilitarization, the occupiers launched a so-called special operation, and in fact the genocide of the Ukrainian people."

Bariiev said that, just as the Crimean Tatars had been deported, so too the Russians were now forcibly deporting hundreds of thousands of Ukrainians, mostly to remote parts of Russia.