US President Joe Biden will sign the $40 billion aid package to Ukraine while he is in South Korea, an official says.

The bill has to be flown to Korea for the President’s signature.

Biden embarked on his trip to Seoul, South Korea on Thursday afternoon.

Ukraine's most senior military figure has met with his NATO counterparts and given an upbeat assessment of the conflict.

"Today, we are not just defending ourselves. We have conducted a series of successful counter-attacks," General Valeriy Zaluzhny, commander-in-chief of the Ukrainian General Staff, said he had told the NATO Military Committee.

Ukrainian forces had unblocked sieges of Kharkiv and Mykolaiv, and were fighting in the Kherson direction, he said.

Zaluzhny said he had stressed that Ukrainians are paying an extremely high price for freedom and European choice, and Europe is experiencing the greatest security crisis since the Second World War.

Ever since 2014, "we were aware that the full-scale aggression would eventually begin, and we were getting ready for it," he added.

Ukraine's military had "acknowledged that the first month would be the turning point. We managed to take away the enemy's strategic initiative, cause critical losses, and force them to abandon the main objective — the capture of the city of Kyiv," he continued.

However, despite Ukrainian successes, he said, "the Russians are maintaining missile fire of high intensity, on average 10-14 ballistic and cruise missiles per day. This is a threat not only to Ukraine, but also to NATO member states," and it was crucial to strengthen missile defenses.

US Secretary of Defense Lloyd Austin thanked Spain for supporting Ukraine as Russia’s invasion of the country continues, noting their “important military contributions to deterrence along NATO’s eastern flank” and “direct security assistance and humanitarian assistance to Ukraine,” during opening remarks ahead of a bilateral meeting with Spanish Defense Minister Margarita Robles at the Pentagon on Thursday.

Austin also said he is looking forward to the NATO summit Spain is hosting in Madrid next month. The summit will be a “turning point for the alliance” as NATO leaders “endorse a new strategic concept, one that must look both east and south,” Austin said.

Robles spoke first in English and then in Spanish. She thanked Austin for hosting her at the Pentagon, calling it “the best expression of our close relationship between United States and Spain.”

“We are living in a very difficult moment. The situation in Ukraine shows to the world we are, with a lot of threats, we have to stand together, the unity is our strength,” Robles said in English.

The Biden administration announced another $100 million security package for Ukraine Thursday as the President is set to sign a bill authorizing billions more in assistance.

The additional security assistance that will “provide additional artillery, radars, and other equipment to Ukraine, which they are already using so effectively on the battlefield," Biden said in a statement. “These weapons and equipment will go directly to the front lines of freedom in Ukraine, and reiterate our strong support for the brave people of Ukraine as they defend their country against Russia’s ongoing aggression."

“I am authorizing our tenth drawdown of additional arms and equipment for Ukraine’s defense from US Department of Defense inventories, valued at up to $100 million,” he said in a statement.

The latest package brings the total US military assistance to Ukraine to approximately $3.9 billion in arms and equipment since the beginning of the Russian invasion.

“The United States, as well as more than 40 Allies and partner countries, are working around the clock to expedite shipments of arms and equipment essential to Ukraine’s defense,” Blinken said.

It comes as the White House warned any further delay in authorizing additional funding to Ukraine could lead to interruptions in the shipments of weapons and equipment.

The Biden administration has made it a top priority to get shipments into Ukraine as quickly as possible, cutting down the approval and delivery process from weeks to days. But officials had warned that money was running out from the last supplemental funding package and that Congress had to act quickly to keep the critical weapons shipments flowing.

The announcement of the latest security package comes as Biden is set to sign a new $40 billion aid bill into law. It includes $11 billion in presidential drawdown authority in which the US pulls directly from American inventories to send weapons to Ukraine, as well as another $6 billion for the Ukraine Security Assistance Initiative, where the Pentagon contracts with weapons manufacturers for Ukraine.

In a tweet Thursday, Kuleba said he spoke with Truss about "ways to hold Russia accountable for its aggression and unblock Ukraine’s food exports."

"Russia bears full responsibility not only for killing, torturing, and raping Ukrainians, but also for starving people across the world, including in Africa," Kuleba continued.

The blockade on Ukrainian exports was also discussed by Ukrainian President Volodymyr Zelensky and UK Prime Minister Boris Johnson during a call Thursday.

In a tweet, Zelensky said the two leaders had discussed “ways to export agricultural products from Ukraine and import fuel to Ukraine.”

Earlier on Thursday, World Food Programme (WFP) chief David Beasley said the failure to open ports in Ukraine would "be a declaration of war on global food security, resulting in famine destabilization of nations, as well as mass migration by necessity."

Beasley called it "absolutely essential" that ports are allowed open, stressing "this is not just about Ukraine" but also "about the poorest of the poor around the world who are on the brink of starvation as we speak."

Ukraine's traditional white embroidered shirt, called a vyshyvanka, is a symbol of solidarity with Ukraine and Ukrainian culture — even more so since Russia invaded the country on Feb. 24.

On Vyshyvanka Day this year, the Ukrainian traditional shirt has taken center stage online once again, as messages and pictures of solidarity are pouring in, from humans and animals alike.

"Today I celebrate the vibrant and rich Ukrainian culture by wearing a Vyshyvanka," said European Commission President Ursula von der Leyen on her official Twitter account on Thursday, along a picture showing her wearing a vyshyvanka. "Every 3rd Thursday of May, people wear this traditional cloth as an expression of unity and national identity. In these difficult times, we stand with our Ukrainian friends."

"Today, on #VyshyvankaDay, I join Ukrainians around the world in their tradition to wear a #vyshyvanka. Ukrainians' fight for freedom is our fight too," said European Parliament President Roberta Metsola on her official Twitter feed as well.

"Happy Vyshyvanka Day, friends!" said Wladimir. "Today an embroidered shirt is one of the symbols of our people heroic fight for freedom. It’s also an element of recognition of the Ukrainians in the world. I’m always proud to be Ukrainian! And especially today. Glory to Ukraine! Glory to its heroes!"

The Ukrainian Emergency Services featured a picture of one of its most dedicated staffers, the dog Patron, wearing a vyshyvanka too.

"Maintaining traditions, today our Patron changed his 'armor' to an embroidered shirt! Looks cool, what do you think?" the service said on its official Twitter account Thursday.

The final vote was 86-11. The bill will now go to President Biden for his signature.

Ukrainian President Volodymyr Zelensky welcomed the US Senate's passage of further economic assistance, tweeting that it is "significant."

Prior to the vote, Senate Majority Leader Chuck Schumer said that the Senate “will keep its promise to stand with the people of Ukraine.” He added that the $40 billion in military, economic and humanitarian aid is “large” and “it will meet the large needs of the Ukrainian people as they fight for their survival.”

Schumer noted that given how important it is to back Ukraine in its fight against Russia, “I wish I could say this vote will be totally unanimous.” Every Democrat in the House supported the emergency aid package, and all Democrats in the Senate are expected to as well.

“While most senators in both parties want this package done, it beyond troubling to see a growing circle of Senate Republicans proudly oppose Ukrainian funding. Two days ago, 11 Republicans voted against merely debating this legislation," he said.

He added: “Around the world, our enemies are watching what we do right now. What do you think they're going to conclude if they start seeing more and more US senators oppose aid to democracies under attack by authoritarianism? Our adversaries might conclude that we're divided America is divided; they might conclude that we lack purpose.” 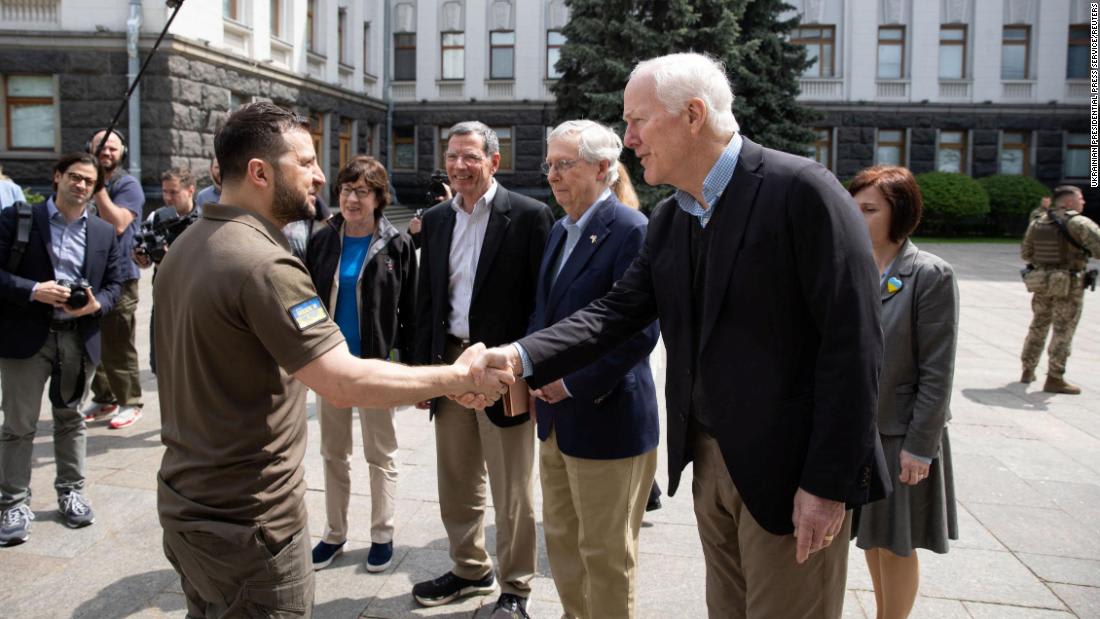 This is the first conversation between the two leaders since Russia’s invasion of Ukraine began on Feb. 24.

“The military leaders discussed several security-related issues of concern and agreed to keep the lines of communication open,” the readout of the conversation said.

Milley’s conversation with Gerasimov comes six days after US Defense Secretary Lloyd Austin spoke with his Russian counterpart, Defense Minister Sergei Shoigu, for the first time since the Russian invasion of Ukraine began.

The conversation between Austin and Shoigu lasted approximately an hour. Austin used the call to urge Shoigu to implement an “immediate ceasefire” in Ukraine, according to a brief readout of the call. The last time the two had spoken was Feb. 18, before Russia began their invasion of Ukraine.

While hundreds of Ukrainian soldiers have left the Azovstal plant this week, there are likely still hundreds inside the besieged complex on the edge of Mariupol — and they appear to include some senior commanders.

One of them is Maj. Bohdan Krotevych, chief of staff of the Azov Regiment. Over the past few days, he has posted on his social media accounts frequently, talking about military tactics and the fight ahead for Ukraine, but not about what might happen to him.

In a post Wednesday, he suggested that he would not be surrendering, saying that "the fight continues."

Russia's defense ministry said over 1,700 Ukrainian soldiers have surrendered at the Azovstal steel plant in Mariupol since May 16. Meanwhile, a Ukrainian military official said the evacuation of the plant continues, and he believes Russia will uphold its word to treat soldiers according to international law. The International Committee of the Red Cross said it has registered hundreds of Ukrainian prisoners of war who have left the plant.

In one Instagram post, Krotevych told his fellow fighters: "The war is not over, the full-scale war has just begun. You will have to become commanders and take control, or run away and then you will suffer even greater losses."

Krotevych said that "Russia, like the United States, was accustomed to fighting against much weaker countries, and every problem was solved by massive artillery shelling or air raids. We are weaker in military potential, but the self-confidence of the enemy is our trump card."

Another one of the Azov Regiment officers still in the steel plant issued a short video statement Thursday evening.

Sviatoslav Palamar, Azov’s deputy commander, said: "My command and I are on the territory of the Azovstal plant. An operation is underway. I will not give any details. I’m grateful to the whole world and to Ukraine for support. I will be seeing you!"

Palamar provided no further indication of what the operation might be.

Some Russian politicians have proposed that Azov commanders be tried as war criminals if they are detained. Russian state media frequently refers to them as "neo-Nazis" and militant nationalists.