Ukraine will battle to a bloody victory but the Russian invasion will end with diplomacy, Ukrainian's Volodymyr Zelensky said in an hour-long TV interview to mark his third anniversary as President.

"We did not start this war. But we have to finish it," Zelensky said in an interview that was recorded Friday and broadcast Saturday.

"Victory will be bloody in battle. But the end will be in diplomacy. We want everything back. Russia does not want to give anything away," Zelensky said.

The broadcast also included an interview with Zelensky’s wife Olena Zelenska, who said the war had not changed her husband.

"I can't say that he has changed. As he was a reliable husband and man, so he is," she said.

But she lamented not being able to see him for months.

"Our family, like all Ukrainian families, is now torn. We didn't see each other for two and a half months, we only talked on the phone. Thank you for this opportunity [this interview], because we are spending time together now -- dating on TV," she said.

The weapons were destroyed by using Kalibr cruise missiles, the spokesman said.

Russian military also struck fuel storage facilities at a plant in the port city of Odesa, Konashenkov added, according to TASS.

After nearly three months of brutal fighting in the besieged port city of Mariupol, Russia says it has taken control of the Azovstal steel plant. Meanwhile, Russia has turned off its natural gas supplies to Finland after the country said it wants to join NATO, and at least six people have been killed in Russian attacks on the city of Severodonetsk, local officials say.

US President Joe Biden has signed the massive $40 billion aid package to Ukraine, a White House official has confirmed.

The bill was flown to Seoul after the Senate passed it in the hours after Biden departed Washington for his trip.

Biden is currently attending a state dinner with the South Korean president. He signed the aid package off-camera earlier Saturday.

As thousands of Ukrainians continue to flee Russian-occupied parts of southern Ukraine, they run a gauntlet of harassment by Russian troops, sometimes coming under fire.

More than a dozen people have spoken to CNN at length about their harrowing journeys out of the Kherson region, which has been under Russian control since the beginning of the invasion in late February. They also tell of the unexplained disappearances at night, the climate of fear and the acute shortages that led them to flee.

Ukrainian officials said Friday that the Russians have now blocked exits from Kherson to areas controlled by the Ukrainian government and are trying to send everyone who wants to leave to Crimea.

They say the Russians have intensified patrols and increased the number of checkpoints.

Several people have been killed and many more injured when their convoys became stranded in what's known as the "gray zone" between Russian and Ukrainian lines.

At least two convoys were marooned for days around Davydiv Brid, a village set in rolling farmland where the regions of Kherson and Zaporizhzhia meet.

One column was fired on a week ago: A man was killed and several people injured. This week, at least three people were killed and many more injured in the village when a convoy of about 100 civilian vehicles was fired on, according to witnesses. 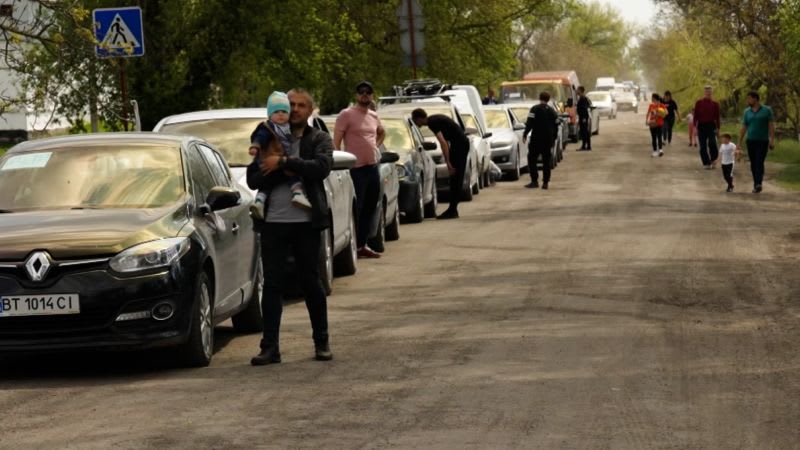 Russian forces continue to prevent people from evacuating the Kherson region into Ukrainian-controlled territory, the General Staff of the Armed Forces of Ukraine said Saturday, accusing Russia of "terror tactics."

Villages there are on the verge of a humanitarian crisis, President Volodymyr Zelensky’s office said Saturday.

Kherson has been occupied by the Russians since early in the invasion of Ukraine, and Russians have been allowing Ukrainians who want to flee only to go to Crimea, which Russia occupied and annexed eight years ago.

Ukrainians in the region have told CNN about critical shortages of medicines, and Russian harassment, disappearances and violence against people who have remained.

Convoys of cars trying to leave the area have been blocked for days at a time and sometimes fired upon.

The deputy head of the Kherson regional council, Yurii Sobolevskyi, said Saturday the Russian occupiers’ "organizational incompetence and criminal actions … are driving the Kherson region into a deeper humanitarian crisis."

He said Ukrainian local governments were refusing "to collaborate with the occupiers," which was creating a leadership vacuum.

The Russians trying to govern the occupied territories "do not know how to solve the problems of communities; their interests are limited to 'collecting taxes' and redistributing property and other assets," Sobolevskyi charged.

At least six people have been killed in Russian attacks on the city of Severodonetsk in Ukraine’s Luhansk region in the past day, the head of the regional military administration said Saturday.

The dead include two people sheltering in a school basement, Serhiy Hayday said, adding that three people had also been wounded when Russians fired on the school.

"Two people died on the spot, three more were hospitalized. Two killed and one wounded are members of the same family," Hayday said in a statement on Telegram.

Residents of Severodonetsk had been hiding since the beginning of the war, according to Hayday.

Two women were killed by Russian shelling in Lysychansk and Privillia, and a man and a woman died near their house in Severodonetsk, he said, without specifying how they died.

The Russians "have thrown all their forces and efforts into the assault on Severodonetsk and cutting off the Lysychansk-Bakhmut route, so that we can’t evacuate people, deliver the humanitarian aid or deliver any supplies or ammunition to our defenders," the official added.

Luhansk is one of two regions of Ukraine that has been partly controlled by Russian-backed separatists since 2014, along with Donetsk. The latest phase of the Russian invasion includes attempts to take full control of the regions.

"Fighting is currently taking place on the outskirts of Severodonetsk," Hayday said, asserting that Ukrainian forces had repulsed 11 enemy attacks. He said Ukrainian defenders had destroyed Russian tanks, artillery systems and combat vehicles in the fighting, and shot down two Russian drones.

A cooling tower at the Azot nitrogen ammonia plant in Severodonetsk caught fire during a Russian attack, Hayday said, but the fire was extinguished and did not spread.

He said about 1,000 people were in the plant’s bomb shelters, and said authorities have tried to provide these people with everything needed: Generators, water and humanitarian aid.

"Thank God, there are not many chemical substances there, as Azot was not working to its full capacity, as it used to during Soviet times. But anyway there are the remnants of chemicals, which are hazardous and highly explosive," he warned.

For weeks, Ukrainian fighters inside the Azovstal steel plant in Mariupol have fought off Russian advances, allowing civilians inside to evacuate during rare breaks in the near-constant bombardment.

On Friday, Russia claimed the final defenders inside had surrendered — placing the sprawling steelworks, and the city, under Russian control. Ukraine has not confirmed this claim, and CNN cannot independently verify the number of Ukrainian forces left inside the plant.

But videos posted online appear to show the remaining fighters walking out of the steelworks — a day after a Ukrainian commander inside issued a video message ordering soldiers to preserve their lives and end their defense of Mariupol.

Those evacuees are now prisoners of war in the self-declared Donetsk People's Republic — and some of their families are finally beginning to hear news of their loved ones.

"My husband wrote me two days ago. The situation is really hard and horrible," said Natalia Zarytska, whose husband was among the fighters in Azovstal.

"My husband is on the way from one hell to another hell."

Some context: Mariupol has been under siege for almost three months, with much of the southern port city under Russian occupation since mid-April. The last Ukrainian fighters have been sheltering inside the steelworks since then, alongside up to 1,000 civilians fleeing the fighting. Evacuations for civilians began on May 1.

Russia halted natural gas exports to Finland on Saturday, according to a statement from Finnish state-owned energy firm Gasum.

“It is highly regrettable that natural gas supplies under our supply contract will now be halted,” Gasum CEO Mika Wiljanen said.

The company had been preparing for such a situation and there would be no disruptions to its transmissions network, or gas supply in the coming months, he added.

Gasum will revert to gas supplies from other sources to service its filling stations, the statement said.

Russian energy in Europe: Gazprom has continued to demand European countries pay for Russian gas in rubles, after Russian President Vladimir Putin said in March that “unfriendly” foreign nations would have their supplies cut if they didn't make the currency switch.

In a statement Tuesday, Gasum rejected the proposed rubles payment scheme and said it would take Gazprom to arbitration over the issue.

NATO bid: Finland on Sunday formally announced its intention to join NATO, ditching decades of neutrality and ignoring Russian threats of possible retaliation in a bid to strengthen its security following the onset of the war in Ukraine.

Finland relied on Russia for nearly 68% of its natural gas consumption in 2020, according to the International Energy Agency.

But Russia’s gas exports account for just 3% of the Nordic nation’s total energy mix — which includes energy generated from biofuels and nuclear sources — according to data from Eurostat and the European Network of Transmission System Operators for Gas.