New Zealand Prime Minister Jacinda Ardern said on Monday that her country would deploy an extra 30 defense force personnel to the United Kingdom to support the training of Ukrainian armed forces.

The soldiers will be stationed in the United Kingdom until the end of July," Ardern said.

They will train Ukrainian soldiers on how to use the L-119 light gun, she added.

The troops, training ammunition and surplus equipment including aiming systems will be moved in an airlift coordinated by the UK.

This follows a previous deployment of 66 New Zealand defense force personnel in April along with a Royal New Zealand Air Force C-130 Hercules.

The pine forests around Irpin are Oleh Bondarenko's happy place. He discovered them as a child, when his mom sent him to the area for summer camp, and he has been coming back ever since.

It's a place full of memories. Vorzel, Irpin, Bucha, the forests, the fresh air. For me, this is a place of respite," the 64-year-old environmental scientist told CNN during a recent trip to Irpin.

The hour-long journey from Kyiv — a trip he has made many times over the decades — was filled with anguish for Bondarenko, who worried what he would find in Irpin.

This area was under Russian control for several weeks in March; it has subsequently become known around the world as the site of some of the worst atrocities committed by Russia in this war. At least 1,200 bodies of civilians have been discovered in the region since Russian troops withdrew from there, according to the Kyiv region police. At least 290 of them were found in Irpin, according to the city's mayor.

In addition to the human toll, the destruction Russian forces caused to the landscape here is brutal and omnipresent: Scorched earth, forest floors ravaged by missiles, and trees broken down and uprooted, while abandoned military equipment litters the ground. Many of the town's neat houses lie in ruins; the woodland and green spaces around them are off limits. 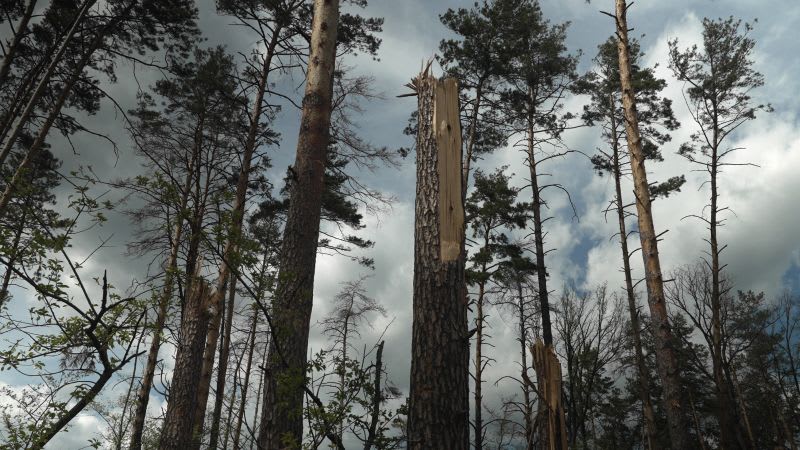 Ukraine's natural environment is another casualty of war. The damage could be felt for decades | CNN

The number of people forced to flee conflict, violence, human rights violations and persecution has now crossed the staggering milestone of 100 million for the first time on record, propelled by the war in Ukraine and other deadly conflicts,” the UNHCR said in a statement.

“One hundred million is a stark figure — sobering and alarming in equal measure. It’s a record that should never have been set,” said UN High Commissioner for Refugees Filippo Grandi.

“This must serve as a wake-up call to resolve and prevent destructive conflicts, end persecution, and address the underlying causes that force innocent people to flee their homes.”

The UNHCR said the war in Ukraine has displaced 8 million within the country this year, and more than 6 million refugee movements from Ukraine have been registered. The number has also been propelled by "new waves of violence" or conflict in Ethiopia, Burkina Faso, Myanmar, Nigeria, Afghanistan and the Democratic Republic of the Congo.

Ukrainian President Volodymyr Zelensky announced a “historic” joint customs control with Poland on Sunday, stressing “unity of Ukrainians and Poles is a constant that no one will break.”

"A solution has been reached that is revolutionizing the order on our border," Zelensky said during his nightly video address. "We are introducing joint customs control with Poland. This will significantly speed up border procedures. It will remove most of the corruption risks. But it is also the beginning of our integration into the common customs space of the European Union. That is a truly historic process."

Zelensky's comments came on the heels of Polish President Andrzej Duda’s visit to Kyiv earlier in the day. Duda also emphasized the unity between the two countries as he became the first foreign leader since the Russian invasion to address Ukraine’s parliament, the Rada.

Zelensky described Ukrainian-Polish relations as "finally on a completely clean, sincere basis, without any quarrels and old conflict heritage. This is an achievement — the historic achievement of our people. And I want the brotherhood between Ukrainians and Poles to be preserved forever. As I talked about it today in front of the deputies, our unity of Ukrainians and Poles is a constant that no one will break."

Zelensky also said he signed a decree introducing a new award "to thank those cities of partner countries that have helped the most. And Rzeszow became the first such city. The savior city. It is fair to say."

The Ukrainian leader also announced the preparation of a bill that will mirror the law passed in Poland about Ukrainian citizens who sought refuge in Poland and who "have been legally given the same opportunities as Poles."

Nearly 3.5 million Ukrainian refugees have entered Poland since the Russian invasion in February, making it by far the single largest host nation for people fleeing the country, according to the UN High Commissioner for Refugees.

"It will be the right gesture to pass such a law in Ukraine," Zelensky said. "Let it be so that the citizens of Poland will never have to use such a law. But let us show our gratitude and our respect."

The Ukrainian leader also said he spoke with British Prime Minister Boris Johnson and "discussed ways to increase the volume of our exports, especially agricultural products. As well as the volume of fuel imports to Ukraine."

During a phone call with Ukrainian President Volodymyr Zelensky, Johnson spoke about the "despicable" blockade of the key port city of Odesa, according to the statement. The Prime Minister will work to "ensure that the country is able to export to the rest of the world," according to a 10 Downing Street statement.

The leaders agreed on the need for the international community to remain united in its condemnation of Putin’s barbarism," Downing Street said.

Johnson said, "every country has a duty to help Ukraine in their struggle for freedom, both now and in the long-term." He reiterated the British people are "1,000% behind the people of Ukraine."

The venue typically used by Russia to promote itself at the World Economic Forum (WEF) in Davos has been rebranded as the "Russian War Crimes House."

Russia House was used to host events at WEF by Russians for many years. A Ukrainian businessman, working with WEF, has turned the venue into an exhibition depicting the devastation and destruction of the war in Ukraine.

Organized by the Victor Pinchuk Foundation and PinchukArtCentre, an international center for contemporary art based in Kyiv, “the exhibition aims to inform about the main facts, share faces, names and dates and provide at least some of the victims a platform from which to tell their real story,” the foundation said in a news release.

Björn Geldhof, the exhibition's curator, said the process of collecting and verifying the images took about one-and-a-half weeks, collecting more than 4,600 images showing “overwhelming amount of evidence of war crimes.”

“An exhibition as this, is one of the steps to raise awareness for the absolute necessity of bringing war criminals to justice and this is not exclusively the task of Ukraine, this is a common task, this is a task for all countries in the world to say this cannot be,” Geldhof said.

Russian politicians and businessmen were not invited to this year’s World Economic Forum following Russia's invasion of Ukraine.

As Russia is not here, we had the opportunity to speak about Russia but about a different reality of Russia, about the war crimes that Russia is committing in Ukraine,” Geldhof said.