In his closing speech at the World Economic Forum in Davos, Olaf Scholz said that the horrors in Ukraine cannot be ignored.

"It keeps us up at night … will it expand beyond the borders of Ukraine?"

He said Putin will only seriously negotiate peace if his army can’t break Ukrainian defensive forces, with neither Ukraine nor the European Union accepting peace dictated by Putin.

Scholz's comments come after Ukrainian President Volodymr Zelensky criticized Henry Kissinger's remarks after the former US Secretary of State appeared to suggest that Ukraine agree to give up much of the Donbas and Crimea. Zelensky on Wednesday compared Kissenger's views to appeasement of Nazi Germany in 1938.

Meanwhile, Scholz said that NATO "will not become a party to this war," as that would put nuclear powers in opposition to each other. He added that Germany will welcome Sweden and Finland into NATO with "open arms."

Earlier, Scholz spoke of the war's impact on the international community, stressing "we cannot let Putin win this war, and I firmly believe he will not win it."

He added that his country would be ready to defend itself at all times in light of Russia's actions.

Russia plans to take the whole of Ukraine, with the capital of Kyiv being its main target, according to city mayor Vitali Klitschko.

It is clear that Russia is not carrying out a "special operation" but rather a "genocide" in Ukraine, Klitschko said during a panel discussion at the World Economic Forum in Davos on Thursday.

He warned that Ukraine is not only defending its own sovereignty, but that of all like-minded nations.

"We defend not just our families, we defend all of you," said Klitschko. "We defend you because we have the same values."

The war is a danger to Europe and the whole world, Klitschko said. He made a plea for "fast decisions" from other leaders on sending Ukraine more defensive weapons, which he says they need quickly.

UK Foreign Secretary Liz Truss has spoken out against Russia's "bullying" and "atrocities" in Ukraine during a visit to Bosnia and Herzegovina on Thursday.

Truss used an address to the Armed Forces of Bosnia and Herzegovina (BiH) to speak out against Russian maneuvering in the Balkan nation, and urged partners to continue to rally behind Ukraine.

"As Russia meddles here, Putin’s troops are committing atrocities just 700 miles away in Ukraine. The people of Ukraine need our support," said Truss.

"They need that support from the whole of Europe, from the whole of the free world. We need to back the people in their brave fight for their country," she added, urging allies not to compromise with or appease Russian President Vladimir Putin.

"We have seen Russia’s bullying tactics – just this week flagrantly saying they will let Ukrainian grain flow only if sanctions on them are lifted," said Truss.

"That is trying to hold the world to ransom, and it must not succeed. So now it is about digging deep, not backsliding," she added.

"Democracy and freedom must prevail over autocratic aggression," said Truss. "Putin must lose in Ukraine. Putin’s aggression must never succeed in Europe."

Germany is working "flat out" to end its reliance on Russian gas imports, the country's Chancellor said Thursday, adding there was "no doubt" that both Berlin and the European Union would end their dependence on energy imports from Moscow.

Russian oil could be completely phased out by the end of the year, Olaf Scholz added during his speech at the World Economic Forum in Davos.

He said Germany was looking towards liquefied natural gas (LNG) terminals and alternative sources of supply.

The EU is following the "same path," Scholz said. However, Ukraine is asking for maximum sanctions against Moscow, including an immediate ban on Russian oil and trade.

This restructuring will have an impact on EU economies, which is already being felt by a rise in energy prices, he warned.

Some background: Germany was one of Russia's largest importers of oil last year.

Before the Ukraine crisis, an $11 billion undersea pipeline -- Nord Stream 2 -- was being built to deliver gas from Russia to Germany.

In February, when Russia invaded, Germany halted its approval of the pipeline, leaving the 1,230-kilometer (764-mile) pipeline empty since its completion in September 2021. 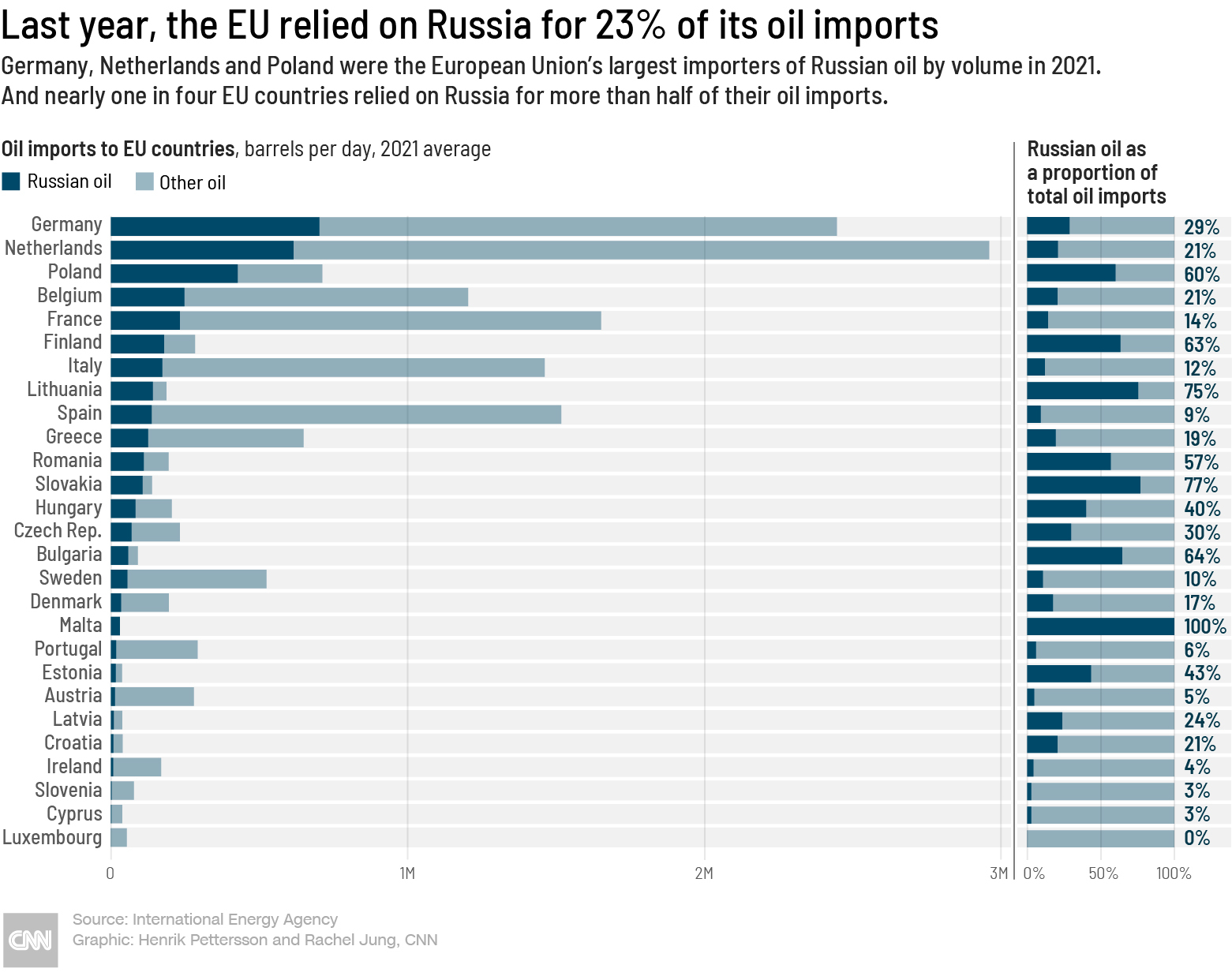 Russia says that "illegal actions" by the West are causing problems with grain supplies in Europe, after the Kremlin was accused of obstructing grain exports from Ukraine.

"We absolutely reject these accusations," presidential spokesperson Dmitry Peskov told journalists Thursday. "On the contrary, we blame countries of the West for taking a number of illegal actions that have led to this 'blockade.'"

Asked whether this meant Western sanctions need to be lifted in order for grain supplies to resume, Peskov said: "They must cancel those illegal decisions that prevent the charter of ships, the export of grain, etc."

Earlier this week, the head of the UN World Food Programme called on Russian President Vladimir Putin to reopen blocked ports in Ukraine to prevent a global food crisis.

And European Commission President Ursula von der Leyen has accused Putin of "weaponizing" food supplies in his invasion of Ukraine by confiscating grain supplies and machinery, as well as blocking exports from ports in the Black Sea.

Prior to Russia's invasion of Ukraine, wheat supplies from Russia and Ukraine accounted for almost 30% of global trade.

Russian attacks on the key city of Severodonetsk continue Thursday, while German Chancellor Olaf Scholz has warned that the war in Ukraine puts at risk the "system of international cooperation that was forged after two world wars." 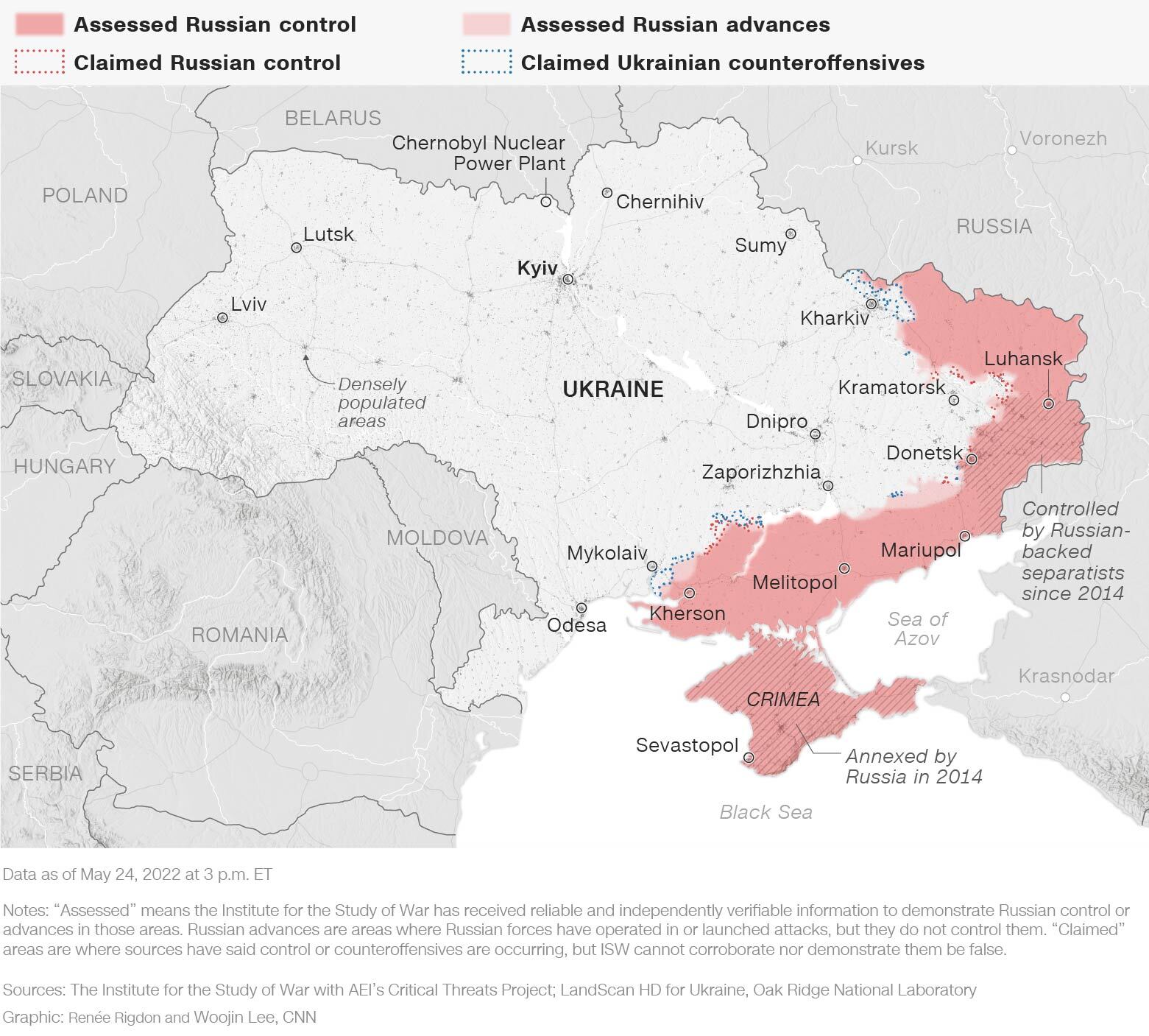 Russian troops attacked more than 40 towns in the eastern Donetsk and Luhansk regions Wednesday, according to Ukraine's Joint Forces Task Force, indicating the scale of a major Russian offensive in the Donbas region.

"During the day, on May 25, Russian troops fired on 41 settlements in Donetsk and Luhansk regions," the statement on Facebook Thursday read. "As a result of enemy shelling, 6 people were killed and 12 were injured."

According to the statement, Russian fire destroyed or damaged 52 high-rise and private residential buildings and other civilian facilities, as well as railway lines and agricultural buildings.

Over the past 24 hours, Ukrainian rescuers had evacuated about 760 people from areas of active combat, the statement added.

The Ukrainian cities of Severodonetsk and Lysychansk are under Russian assault amid an offensive in the eastern Luhansk region, the Office of the President of Ukraine said in an update Thursday.

Severodonetsk -- an industrial city situated across the Siverskyi Donets river from Lysychansk -- has been under heavy shelling, and the statement said the Impulse Research and Production Association and 11 high-rise buildings in the city had been destroyed.

Oleksandr Striuk, head of the Severodonetsk military administration, said in a radio interview Thursday that the connection between Severodonetsk and Lysychansk had been "complicated" because of Russian shelling of a bridge between the two cities.

Striuk added that communication was limited and that 90% of Severodonetsk's housing stock had been damaged or destroyed.

The fall of Severodonetsk -- the last major city in the Luhansk region under Ukrainian government control -- would be a major setback for Kyiv.

"The situation is difficult, especially in the Donetsk operational district," said Fedir Venislavskyi, a Ukrainian lawmaker and member of the parliamentary Committee for National Security, Defense and Intelligence.

"The hottest spots are Severodonetsk and Lysychansk," he said, adding that Russian soldiers were trying to encircle Ukrainian troops before next targeting the cities of Bakhmut and Soledar.

"The enemy partially controls Lyman and is going to the outskirts of Severodonetsk. The situation in this operational area will be very difficult in the coming days," Venislavskyi said.

German Chancellor Olaf Scholz has warned that Europe and the international community are at a critical point, and said the world has changed since the Ukraine war began.

"The world is at a turning point," said Scholz during a special address at the World Economic Forum in Davos, adding that, not only is Ukraine at risk, but also the "system of international cooperation that was forged after two world wars."

The war was a "thunderbolt," but the prospect of Russia "capturing Ukraine seems less likely than it did at the beginning" of the invasion, said Scholz, citing the fierce resistance by Ukrainian troops and help from the international community.

Moscow has failed in its military objectives so far, but succeeded in uniting the international community and fast forwarding Ukraine’s plan to join the European Union, he added.

"We cannot let Putin win this war, and I firmly believe he will not win it," said Scholz.

He added that Germany will equip its army so it's ready at "all times" to defend itself "under the new conditions" dictated by Russia.

Germany is in the process of changing its constitution to make this happen, hoping to make more than $105 million available to modernize its armed forces, he added.

"It is the security of our country that is at stake," he said. "We are sending an unequivocal message to our allies that you can rely on Germany."