Ukraine's President Volodymyr Zelensky said the situation in Donbas is "very difficult" as Russia ramps up firepower and manpower, and makes incremental gains in the southeastern region. But he vowed Donbas would be "Ukrainian again."

The US Defense Department awarded a top defense contractor a $624 million contract to replenish Stinger anti-aircraft missiles, one of the key systems the US has provided to Ukraine as Russia's war continues.

The department announced the contract to Raytheon on Friday afternoon, though it was officially awarded on Wednesday. The contract is "for the procurement of Stinger missiles and associated equipment." There is no timeline listed for completion of the work.

The US has sent more than 1,400 Stinger systems, including missiles and launchers, to Ukraine to help them challenge Russia's attempt to control the skies. Stingers are short-range anti-aircraft missiles with a range of about 3 miles (nearly 5 kilometers).

Though their range is too short to allow them to target high-flying aircraft, they can effectively shoot down drones and low-flying aircraft and helicopters. The US has little use for Stingers, but they have been in high demand in Ukraine since the beginning of the invasion.

Ukrainian President Volodymyr Zelensky has promised that Donbas will be "Ukrainian again," as Russian forces continue to make incremental gains in the southeastern region.

Speaking during his nightly address Friday, Zelensky called the current situation in Donbas "very difficult," referencing Russia's ramping up of firepower and manpower in the region.

"That's why we have to increase our defense, increase our resistance, and Donbas will be Ukrainian again. Even if Russia will bring all suffering and ruination to Donbas, we will rebuild every town, every community. There's no real alternative," Zelensky stressed.

The US Defense Department maintained during a press briefing Friday that Russia is continuing to make "incremental gains" in Donbas.

Ukraine continues to call on international partners, including the UK, to provide it with multiple launch rocket systems to counter the Russian offensive.

While acknowledging Ukraine's request, Pentagon press secretary John Kirby stressed during Friday's briefing that “decisions… haven’t been made yet.”

The US Defense Department said it is “mindful and aware” of Ukraine’s request for multiple-launch rocket systems, but that “decisions … haven’t been made yet.”

“Our goal from the very beginning has been to try to help them in the fight that they’re in today,” said outgoing Pentagon press secretary John Kirby at a briefing with reporters.

“I won't go so far as to say it's too late to provide the Ukrainians with any system or capability that they might need because they are very active in the fight and they have pushed back the Russians up near Kharkiv,” Kirby said.

However, Kirby said the Defense Department is “mindful of the clock” when it comes to Russia’s invasion of Ukraine.

“We are ever mindful as we have been since the beginning, mindful of the clock here, mindful of this sense of urgency, mindful that time is not our friend,” said Kirby, “which is why we have been continuing to move equipment literally every day for the last 90 plus days of this war.”

CNN reported Thursday that the Biden administration is preparing to send MLRS systems as part of a larger package of military and security assistance to Ukraine, which could be announced as soon as next week. The MLRS and its lighter-weight version, the HIMARS, can launch as far as 300 kilometers (186 miles), depending on the type of munition.

Ukrainian officials are denying that the city of Severodonetsk in Luhansk is surrounded, but have acknowledged that Russian forces hold one part of the city.

"The city is not cut off, and it is not surrounded. The fighting continues," said Serhiy Hayday, head of the Luhansk region's military administration, in a radio interview. The Russian army has "only entered the outskirts of the city," he claimed.

"This is a war, a war against a very powerful enemy, and in theory anything is possible," Hayday said when asked about the possibility of Russian troops gaining further ground in the city. "The higher military command sees this situation. But so far I can't say that in a day, two, three they will completely take over the area. No, most likely they won't."

"We have enough strength," he continued, while also cautioning that, "Maybe there will be a command to our troops even to retreat."

Finnish Foreign Minister Pekka Haavisto expressed optimism that “sooner or later, Finland and Sweden will be members of NATO” and said discussions with the Turkish government would continue as Ankara threatens to block the two nations from joining the defensive alliance.

In an interview with CNN in Washington, DC, Friday, Haavisto said he expected that the topic of Finland’s NATO membership and overcoming Turkey’s current opposition would come up in his conversations with US Secretary of State Antony Blinken in his meeting later in the day, adding he was “quite confident” that other NATO countries had spoken with Turkey as well.

Delegations from Finland and Sweden – which both formally applied for NATO membership last week – traveled to Turkey earlier this week for talks on NATO accession. All current NATO members must approve new members.

Haavisto, who did not attend the talks, called it a “good meeting,” and said it lasted for five hours. Haavisto indicated that there are European and Finnish laws and policies in place that guide Finland’s actions on Turkey’s main demands – the designation the PKK as a terrorist organization, lifting arms export controls, the extradition of Kurdish militants that Turkey sees as terrorists. However, Turkish presidential spokesperson Ibrahim Kalin said following the delegation’s visit that “if Turkey’s security concerns are not met with concrete steps, the process cannot progress.”

Haavisto said “there was an agreement to continue those discussions,” but a next round of talks has not yet been arranged.

“From our perspective, the time frame is essential, because we are, of course, looking forward to NATO Summit in Madrid,” which is at the end of June, “and we hope that during the NATO Summit, the new members would be welcomed, at least, and the NATO ‘Open Door Policy’ would be confirmed, but of course, this is up to each and every member state that they can also influence the process,” he said.

The decisions by Finland and Sweden to apply for NATO was a major shift prompted by Russia’s war in Ukraine. 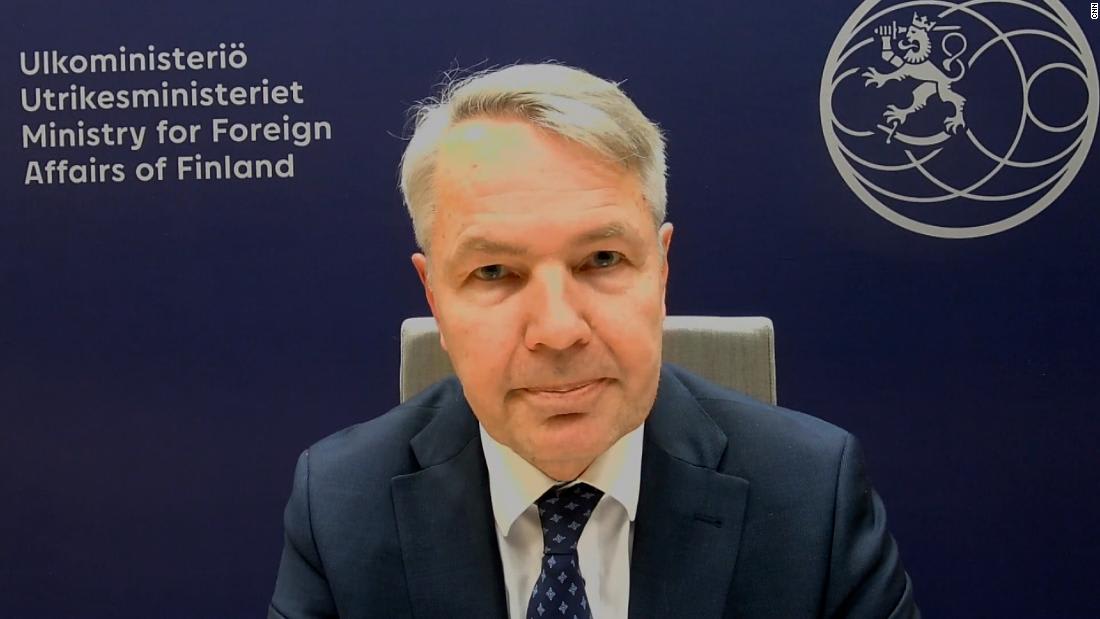 US Secretary of State Antony Blinken spoke on Friday with Ukrainian Foreign Minister Dmytro Kuleba "to discuss continued U.S. security assistance to Ukraine as it defends its sovereignty and territorial integrity in the face of Russia’s brutal and unprovoked war," according to State Department spokesperson Ned Price.

"The Secretary and Foreign Minister Kuleba shared updates on efforts to resolve the global food security crisis caused by President Putin’s invasion, noting that the Kremlin continues to weaponize food and spread false claims about US sanctions," according to a statement from Price.

This was their second call this week after speaking on Tuesday.

Kuleba said on Twitter that he and Blinken discussed Ukraine's urgent need for supplies of heavy weaponry as well.

"I value his personal efforts to ensure a sustained U.S. and global support for Ukraine. Heavy weapons on top of our agenda, and more are coming our way. Ukraine and the U.S. work hand in hand to deliver our food exports despite Russia’s reckless blockade," Kuleba tweeted.

Russian President Vladimir Putin has assured Austrian Chancellor Karl Nehammer that an exchange of prisoners will take place between Russia and Ukraine.

The two leaders discussed the possibilities for prisoner exchanges during a 45-minute phone call on Friday, according to a statement of the call from the Austrian Chancellery.

According to the chancellery, Putin "assured" the Austrian leader "that the efforts towards a prisoner of war exchange will be intensified," adding that he was "optimistic that such an exchange would be possible again soon."

The Russian leader provided his Austrian counterpart with "an assessment of the situation the context of the ongoing special military operation to protect Donbas," the Kremlin said in a readout of the call, using a standard euphemism to refer to the invasion of Ukraine.

They also discussed efforts to "ensure the safety of navigation in the waters of the Azov and Black Seas," the Kremlin said.

"A thorough exchange of views was held on issues related to global food security. Vladimir Putin emphasized that attempts to make Russia responsible for the difficulties with the supply of agricultural products to world markets are groundless," according to the Kremlin.

The Austrian Chancellery added that Nehammer did receive "positive signals" from Putin that a solution will be found to allow the export of Ukrainian goods through the seaports of the Black Sea.

During the call, Russia's "commitment to comply with contractual obligations on natural gas supplies to Austria was reaffirmed," the Kremlin said.