Ukrainian President Volodymyr Zelensky said in his nightly address on Saturday that the time until Ukraine is liberated “grows shorter” every day, and that it is “just a matter of time” before Ukraine takes back Russian gains.

“Ukraine will take everything back [from Russia]. This is an imperative,” he said, “And it's just a matter of time. Every day at this same time, the time until liberation grows shorter. Everything we do is for this.”

Zelensky said the situation in the Donbas remains difficult, especially in the areas of Severodonetsk, Lysychansk, Bakhmut and Popasna.

“Above all, in terms of weapons supply, every day we are getting closer to outnumbering our enemy,” the Ukrainian president claimed.

He added: “We will dominate the occupiers with technological and conventional striking power. A lot depends on our partners. They are ready to provide Ukraine with everything necessary to defend freedom. So I expect good news on this already, next week.”

Zelensky said Russian forces inflicted “barbaric blows” on the Sumy region using rockets and mortars. He also referenced Saturday’s Russian attack on Mykolaiv, which struck a residential area 20 meters from a kindergarten, killing one person and wounding seven others.

“Such was the target that the Russian Federation chose. Over and over [such actions] will remind the world that Russia must finally be officially recognized as a terrorist state, a state sponsor of terrorism,” Zelensky said.

He said Russian forces are preventing Ukrainians from evacuating the Kherson region.

“Those who are confident in their position would certainly not make such decisions. This is clearly a sign of weakness. What it shows is that they have nothing to offer the people, and the people do not want to take anything from them. So, they resort to taking people hostage,” Zelensky said.

The Women’s National Basketball Players Association (WNBPA) on Saturday released a statement calling for action regarding the release of Brittney Griner and for Griner’s wife to be granted a meeting with US President Joe Biden.

Saturday marks 100 days since Griner was detained in Russia.

Earlier this month, a Russian court extended the WNBA star’s pretrial detention until at least June following her arrest in February. Russian authorities claim Griner had cannabis oil in her luggage, and she has been accused of smuggling significant amounts of a narcotic substance – an offense punishable by up to 10 years in prison.

The statement in a series of tweets from the WNBPA reads: “Brittney Griner is our teammate, our friend, and our sister. She is a record-breaker, a gold medalist, a wife, a daughter, a champion, a role model, an all-star, and so much more."
“Right now, BG is an American citizen who has been wrongfully detained in Russia for 100 days. That’s 144,000 minutes," it added.

The statement went on to call for action from professional and amateur athletes alike, as well as the media and others.

“To our sisters, brothers and colleagues in professional sports: sign the petition, hold your own media blackouts, please. Help us reach the White House. To athletes of any age, ability level, team, sport, or country: this is OUR teammate. A member of OUR global sports community, we need to stand up and stand together to call for her release. Speak up, speak out, and do not stop until BG is home," it said.

“Her person, our sister has been wrongfully detained for 100 days. You’ve heard our pleas. You have heard BG’s wife Cherelle’s pleas. And now more than ever, we need you to stand with us, and get her person home,” it said.

Cherelle Griner earlier on Saturday posted on her Instagram pleading for action from Biden.

As Russia pummels the eastern city of Severodonetsk with heavy shelling, authorities are moving to evacuate the remaining neediest civilians of neighboring Lysychansk.

For 74-year-old Ekaterina, it is almost unimaginable that she is leaving her home, a one-room apartment she shares with her husband.

"I didn't collect any of my things. I don't know where I will live. It's better they kill me," she said, crying, via translated remarks. "You know, I have nowhere to hide. We have one room. I lie opposite the shelling. In the last minute, I thought if I'm going to suffer like this, better they kill me."

After she and her husband get into authorities' vehicle, she asks, "when is this grief going to end?"

Elsewhere in Lysychansk, CNN's Nick Paton Walsh met a large family with young children that is staying put, despite the shelling. Children play on swings outside as blasts can be heard in the background. They cook on an outdoor stove and spend nights in their basement.

Many people in the Luhansk region have ties to Russia, with relatives in both countries.

At a cemetery in the city, there are three types of mass graves: In one, dirt has been poured upon the bodies of an estimated 160 people whose families cannot bury them yet; in another, white body bags have the names of the dead collected daily written on them; and the third is empty in preparation for even more dead. 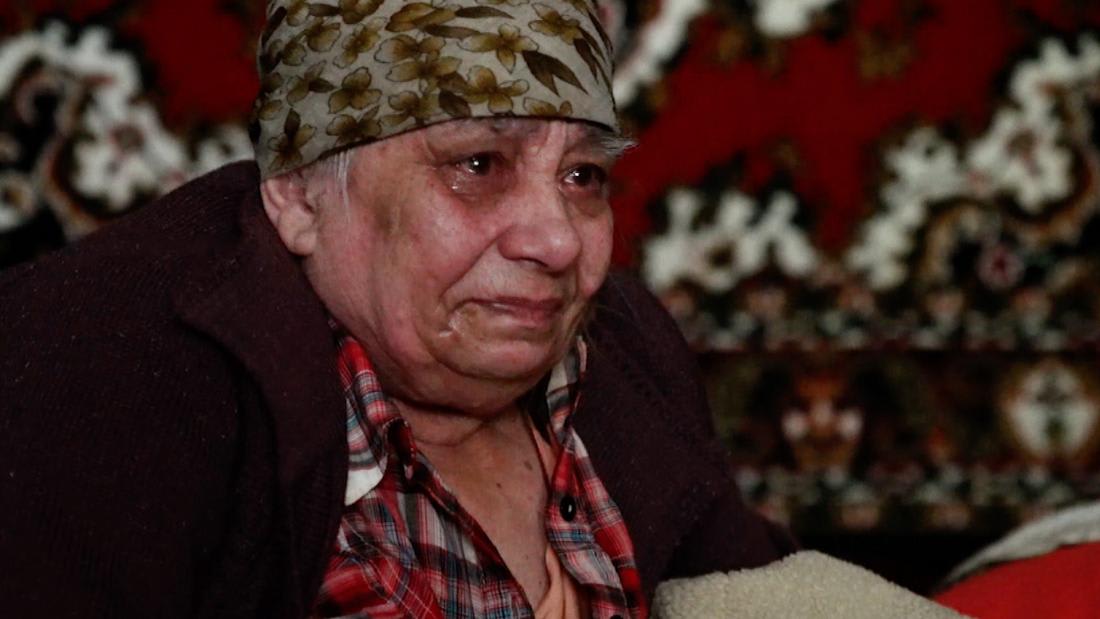 Video: 'When is this grief going to end?': Elderly woman tearfully uprooted from home - CNN Video

At least one person is dead after shelling in the southeastern Ukrainian port city of Mykolaiv, the regional state administration said Saturday.

Mykolaiv is under Ukrainian government control, but is not far from the front lines of fighting between Ukrainian and Russian forces. It is about 60 kilometers (37 miles) away from Kherson, which has been under Russian control since the early days of the invasion.

"On Saturday morning, May 28, occupying troops of Russia once again fired at the city of Mykolaiv," according to a statement. "And again the blow fell on residential areas. One person died on the spot. At least 6 civilians are also known to be injured."

"Mykolayiv city was shelled again this morning," according to a previous statement. "The Russians hit the yard of a residential area, 20 meters away from a kindergarten. There are injured people due to the shelling."

Russian forces are seeking to encircle the defenders of the Luhansk city of Severodonetsk -- the last major Ukrainian stronghold in the region -- as Moscow's troops continue to press their offensive in the east of the country while outnumbered Ukrainian forces attempt to hold them off.

A branch of Ukraine's Orthodox church has broken ties with Russia's Patriarch Kirill over the Russian spiritual leader's support for the war in Ukraine, deepening a rift between the Moscow church and other Orthodox believers.

Leaders of the Ukrainian Orthodox Church (UOC), which had been formally subordinate to the Moscow Patriarchate of the Russian Orthodox Church, held a council Friday in response to Russia's invasion of Ukraine. In a statement, the council said it "condemns the war as a violation of God's commandment 'Thou shalt not kill!'" and urged the governments of Ukraine and Russia to pursue a path of negotiation.

But the council also had criticism for Patriarch Kirill -- who has given his support to the invasion of Ukraine and has put his church firmly behind Russian President Vladimir Putin -- and said it had opted for the "full independence and autonomy" of the Ukrainian church.

A large part of the Orthodox community in Ukraine has already moved to establish independence from Moscow. That movement took on further momentum in 2018, after Patriarch Bartholomew I of Constantinople -- a Greek cleric who is considered the spiritual leader of Orthodox believers worldwide -- endorsed the establishment of an independent Orthodox Church of Ukraine.

The Russian Orthodox Church and the Moscow Patriarchate, which has become closely entwined with the Russian state under Putin's rule, responded by cutting ties with Bartholomew.

The Orthodox Church of Ukraine, which has allegiance to Bartholomew, is separate from the UOC, which made its announcement Friday. But the emergence of a church independent of Moscow has also infuriated Putin, who has made restoration of the so-called "Russian world" a centerpiece of his foreign policy and has dismissed Ukrainian national identity as illegitimate.

The UOC council's statement on Friday said the war had been devastating for members of the church.

"During the three months of the war, more than 6 million citizens of Ukraine were forced to leave the country. These were mainly Ukrainians from the southern, eastern, and central regions of Ukraine. A large majority of them are faithful children of the Ukrainian Orthodox Church," the statement read. "It is necessary to further develop the mission abroad among Orthodox Ukrainians to preserve their faith, culture, language and Orthodox identity."

The leaders of Germany and France held a phone call with Vladimir Putin on Saturday, in which they pressed the Russian President to agree to an immediate ceasefire in Ukraine and withdraw Russia's troops from the country, German officials said.

German Chancellor Olaf Scholz and French President Emmanuel Macron spoke with Putin for 80 minutes “on their initiative,” according to the German government's press office.

“The German chancellor and the French president urged an immediate ceasefire and a withdrawal of Russian troops. They called on the Russian president to engage in serious direct negotiations with the Ukrainian president and to find a diplomatic solution to the conflict,” the German government news release said.

A statement from the French Presidential office, the Elysee Palace, said: "Any solution to the war must be negotiated between Moscow and Kyiv."

In the call, Macron and Scholz also called for the release of about 2,500 Azovstal defenders who have been taken as prisoners of war by Russian forces, the French readout said, in a reference to Ukrainian forces who were captured after defending the Azovstal steel plant in Mariupol for weeks.

In addition, the two leaders urged Putin to lift the blockade of Odesa to allow the export of Ukrainian grain through the Black Sea in order to avoid a world food crisis, according to the statement.

Some context: Kremlin spokesman Dmitry Peskov said Friday that negotiations between Russia and Ukraine were frozen. He also accused Kyiv of making “contradictory” statements that Moscow did not understand.

A day earlier, Peskov said Moscow expected Kyiv to accept the status quo and meet its territorial demands, following remarks by former US Secretary of State Henry Kissinger that appeared to suggest Ukraine has to agree to give up Crimea and much of the Donbas region to Russia.

In a May 23 interview with Reuters, Ukrainian presidential adviser Mykhailo Podolyak ruled out agreeing to a ceasefire with Russia and said Kyiv would not accept any deal with Moscow that involved ceding territory.

Among the matters the two discussed was the growing global food supply crisis, which has been exacerbated by Russia's blockade of Ukrainian ports. Zelensky said Friday that some 22 million tons of grain meant for export were sitting in silos, as Russia is blocking export routes through the Black Sea and Azov Sea.

Ukraine and Russia together are responsible for about 14% of global wheat production, according to Gro Intelligence, an agricultural data analytics firm. The two countries supply about 29% of all wheat exports.

Russian forces have shelled a district of the Ukrainian city of Kharkiv in recent hours, the regional military governor said in a statement.

Oleh Syniehubov, head of Kharkiv regional military administration, said the Kyiv district of Kharkiv city had been subjected to Russian shelling over the past 24 hours, and that several shells hit the suburb of Mala Danylivka overnight -- with no casualties.

A 65-year-old woman was killed by Russian fire in the village of Slatyne, he added.

Ukrainian troops have in recent weeks pushed back Russian forces from around Kharkiv, Ukraine's second-largest city. But it has remained in range of some Russian weaponry.

"Fighting continues in the region," Syniehubov said. "In the Kharkiv direction, the enemy is trying to hold its ground and prevent further advance of Ukrainian troops."

Syniehubov said Ukrainian troops had shot down a Russian Ka-52 combat helicopter in the Kharkiv region, a claim that could not be immediately verified.