The Ukrainian military says that Russian shelling across the border into the northern regions of Sumy and Chernihiv resumed Sunday.

In its operational note, the General Staff of the Armed Forces also said that in Donbas, "the main goal of the enemy is to surround our troops in the areas of Lysychansk and Severodonetsk and to block the main logistics routes."

(Russian forces) are trying to gain a foothold on the north-eastern outskirts of the city of Severodonetsk, conducting assault operations in the direction of the city center," it said.

Ukrainian troops continue to maintain positions in Severodonetsk and neighboring Lysychansk, despite constant shelling and airstrikes.

The General Staff said Russian efforts to degrade Ukrainian defenses further west continued, with artillery, mortar and multiple rocket systems being used against several towns and villages in the direction of Bakhmut.

It said that Russian efforts to cross the Siverskyi Donets River in certain areas continued.

Among several towns and villages in northern Ukraine that were hit by cross-border shelling were Hirsk and Hrinivka in Chernihiv and Bachivsk and Seredyna-Buda in Sumy. Analysts say Russian attacks on these areas are designed to prevent Ukrainian forces from being redeployed to the main fronts in Donbas.

The military gave no further details about a Ukrainian counter-offensive in the southern regions of Kherson and Mykolaiv that was launched on Saturday. But it said Russian bombardments of settlements near the city of Kryvyi Rih, also in the south, had used mortars, air strikes and artillery. The front lines in that region have changed little in recent weeks.

New satellite imagery shows that a Russian freighter full of grain allegedly stolen from Ukrainian farms has arrived in the Syrian port of Latakia -- its second trip within four weeks.

The new images -- provided by Maxar Technologies -- show the bulk carrier Matros Pozynich at Latakia on May 27.

It is one of three ships that have been loading grain in the Crimean port of Sevastopol since the Russian invasion of Ukraine. It was last seen in Sevastopol on May 19 and subsequently tracked transiting the Bosphorus strait and south along the Turkish coast. It's estimated that the ship can carry about 30,000 tons of grain.

The Matros Pozynich's sister ship has also loaded grain at Sevastopol in the last two weeks.

Some context: CNN has previously reported that convoys of trucks have been seen carrying grain from farms and silos in southern Ukraine into Crimea. Ukrainian authorities estimated earlier this month that Russian forces in occupied areas had seized more than 400,000 tons of grain.

The grain thefts are threatening this year's harvest in Ukraine -- which is one of the most important grain-producing countries in the world.

For Russia, grain is an attractive commodity. The price of wheat is about $400 a ton on world markets and has moved sharply higher this year. 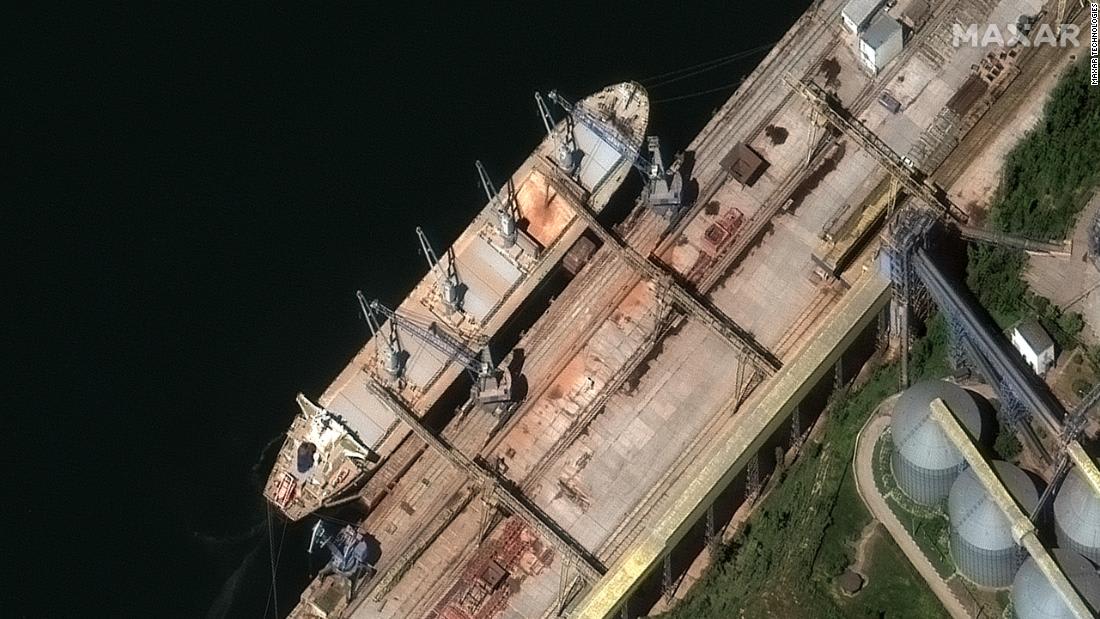 The Ukrainian military says it has begun a counter-offensive against Russian forces in the south and has claimed significant advances in the direction of Kherson.

Serhii Hlan, a deputy who sits on the Kherson region council, said on Saturday Ukrainian forces "continued offensive operations and pushed the enemy back 9 kilometers (5 miles) in the Beryslav district."

Davidiv Brid has been on the front lines for weeks and became an escape route for civilians trying to leave Kherson, often under fire.

The Ukrainian military published video of artillery strikes, purportedly against Russian positions. It said on Facebook that "the artillery war continues."

"Ukrainian soldiers chase and burn the occupiers' equipment on the lands of Kherson and Mykolaiv regions," it said. "Kherson hold on, we're close!"

There is no independent evidence of the Ukrainian advances.

Russian forces continue to shell Ukrainian towns and villages in the Mykolaiv region, according to Ukrainian officials. They said there had been strikes against several communities but reported no injuries. The town of Bereznehuvate had been hardest hit, they said.

Some context on the fighting in southern Ukraine: Russia appears to be consolidating its gains in the south and attacking further afield in places like Mykolaiv, which is close to the front line but remains under Ukrainian control.

The Institute for the Study of War, a US-based think tank, assessed that Russian forces have "continued to fortify and equip their positions throughout southern Ukraine in an effort to retain permanent control over the territory."

Ukraine’s President Volodymyr Zelensky visited the "front line positions" of the Ukrainian military and met with soldiers during a trip to the Kharkiv region, his office announced on Sunday.

"I want to thank each of you for your service. You risk your life for all of us and our state. Thank you for defending Ukraine's independence. Take care of yourself," he said.

During the visit, Zelensky got an operational update on the situation there, and visited destroyed administrative and residential buildings in the city.

He also chaired a meeting with regional officials, including military leaders and the Kharkiv mayor.

The head of the Kharkiv regional military administration, Oleg Synegubov, said that 31% of the region's territory is currently occupied, and 5% has been "liberated" back into Ukrainian hands.

"We are not yet able to fully inspect some of the liberated settlements, conduct full-fledged demining and begin rebuilding critical infrastructure, as shelling continues. Where we can do it remotely, we do it," Synegubov said.

Synegubov added that 2,229 high-rise buildings have been damaged in Kharkiv, including 225 which were completely destroyed. In the northern and eastern districts of Kharkiv, 30.2% of the total housing stock has been damaged or destroyed.

"We have to find funds, credit lines. The state must ensure this in terms of guarantees, and the leaders of cities and regions must find great projects and money," Zelensky said. 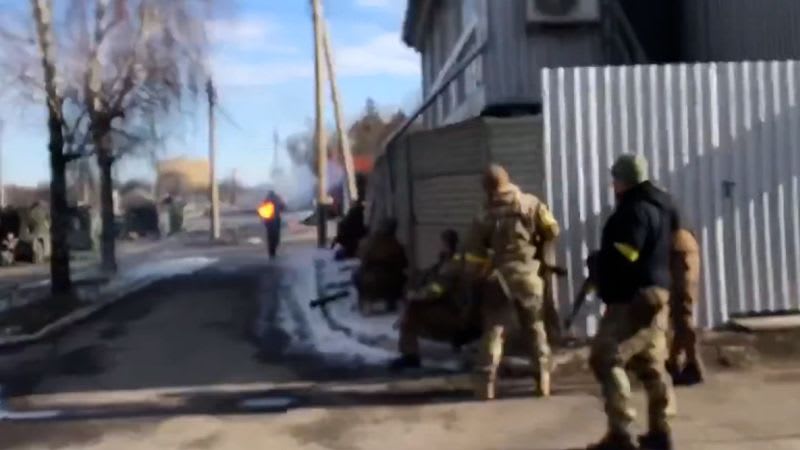 Turkish President Recep Tayyip Erdogan said on Sunday that talks last week with Sweden and Finland regarding their NATO membership did not happen "at the desired level."

"Unfortunately, the talks held by our delegation with Finland and Sweden were not at the desired level," Erdogan said while speaking to reporters on his plane following a trip to Azerbaijan, according to Turkey's state-run Anadolu news agency.

Ibrahim Kalin, a spokesman for Erdogan, said on Friday after meeting with Swedish and Finnish delegations that Turkey is "not under time pressure to solve this issue until that summit."

"We are determined to ensure that the process moves forward on a solid basis and that it progresses depending on the steps taken to meet Turkey's security concerns," Kalin said.

Some background: Finland and Sweden formally applied to join NATO earlier this month, driven by Russia's invasion of Ukraine. The decision represents a setback for Moscow, with the war in Ukraine triggering the kind of enlargement of the alliance that it invaded Ukraine to prevent.

Accession of new states, however, requires consensus among existing members -- and that's where Ankara comes in.

Erdogan has repeatedly asserted that both countries are effectively supporting terrorists.

"We cannot say 'yes' to the countries supporting terrorism to join NATO," Erdogan said in remarks published by the Turkish government.

Erdogan to speak with Putin and Zelensky on Monday: Meanwhile, the Turkish government said Erdogan will hold separate phone calls with his Russian and Ukrainian counterparts on Monday to encourage the parties to maintain channels of dialogue and diplomacy to bring peace to Ukraine.

"I will have phone calls with both Russia and Ukraine on Monday. We will continue to encourage the parties to use the channels of dialogue and diplomacy," Erdogan told reporters.