A military victory against Russia is “unlikely” if the United States holds back supplies of long-range artillery, a senior Ukrainian official tells CNN.

Alexey Arestovych, a Ukrainian presidential advisor, told CNN the weapons are “essential for fate of Ukraine and its independence.”

US officials said last week they are considering a Ukrainian request for deliveries of Multiple Launch Rocket Systems, MLRS, which can strike targets as far as 300 kilometers, or about 186 miles, depending on the type of munition.

Arestovych told CNN that even a small number of the weapons systems — as few as 20 — would be a “game-changer” in the conflict with Russia, as he said it would enable Ukrainian troops to defend themselves against long-range Russian attacks.

“Without MLRS, we would probably be able to stabilize the frontlines,” Arestovych said.

“But we would be looking at losing Kherson, Luhansk, Donetsk and parts of the Zaporizhzhia region,” he told CNN.

But arming Ukraine with long-range rockets has raised concerns in the West that the MLRSs could be used to attack targets inside Russia, possibly escalating the conflict.

Acknowledging those concerns, Arestovych told CNN that Ukraine would only use the weapons to defend their territory, not to attack Russia.

He was speaking on behalf of the Russian authorities, which currently control Melitopol.

Two civilians — a man and a woman — were injured due to the explosion, Selivanov said.

The attack “looks like it was done by Ukrainians,” Selivanov added, without providing further details.

Earlier, Ivan Fedorov, the exiled Ukrainian mayor of the city said there are “several versions” of what happened.

Ukraine's Defense Ministry says that Russian forces are carrying our artillery strikes along much of the frontline that runs through Luhansk and Donetsk regions as they try to break through Ukrainian defensive positions.

Oleksandr Motuzianyk, the Defense Ministry spokesperson, told a briefing Monday that Russian forces "are trying encircle our troops in Donetsk and Luhansk regions."

"The battles have reached maximum intensity. The Russian occupation forces engage along the entire frontline and try to shell our rear positions with artillery," he said.

Suggesting an intensification of Russian efforts, Motuzianyk said "simultaneous assaults on multiple access have been conducted."

On the situation in Severodonetsk, Motuzianyk said: "There are street fights, [the] Ukrainian military keeps fighting. We know all about enemy plans. I’m quite optimistic about the situation but it's tense. We are trying to prevent the enemy from encircling our units near Lysychansk and Severodonetsk and blocking the main logistics path," which runs west to Bakhmut.

He said that Russian forces were regrouping "in order to relaunch an offensive on [the] Izium-Barvinkove and Izium-Slovyansk [directions]." The Russians have already taken the town of Lyman northeast of Sloviansk.

In a shallow trench in a narrow strip of trees that offers the only cover in this Ukrainian landscape in the Mykolaiv district, a man stands with his two adult sons.

This is their first war together. Their first time as soldiers. When Russian President Vladimir Putin invaded their land, they went to the army as a family to sign up to fight.

Yaroslav is a 59-year-old grandfather. One of his sons, Nazar, 34, has two sons of his own. Another son, Pavlo, 26 has a daughter.

They left their wives and children to go the front lines but asked to stay together in their battalion.

Fighting as a family and for their family keeps their mission "very easy and simple," Yaroslav told CNN.

"What can I say — we love our country and will stand for it till the very end," he said.

The men acknowledge with nervous laughter that it might not be so easy for those still at home, especially Yaroslav's wife who has her husband and sons all in harm's way.

"Mother surely worries because of us," Nazar said. "She's nervous. Also, our wives and our children worry. But nevertheless, we are here, we are standing for our land."

You can read more here.

Russia "does not stop conducting offensive operations" in the eastern areas of Ukraine, the General Staff of the Armed Forces of Ukraine said in its daily update on Monday.

In the Kharkiv region in the northeast, Russia fired on the areas north and northeast of the city, Ukraine’s military said. 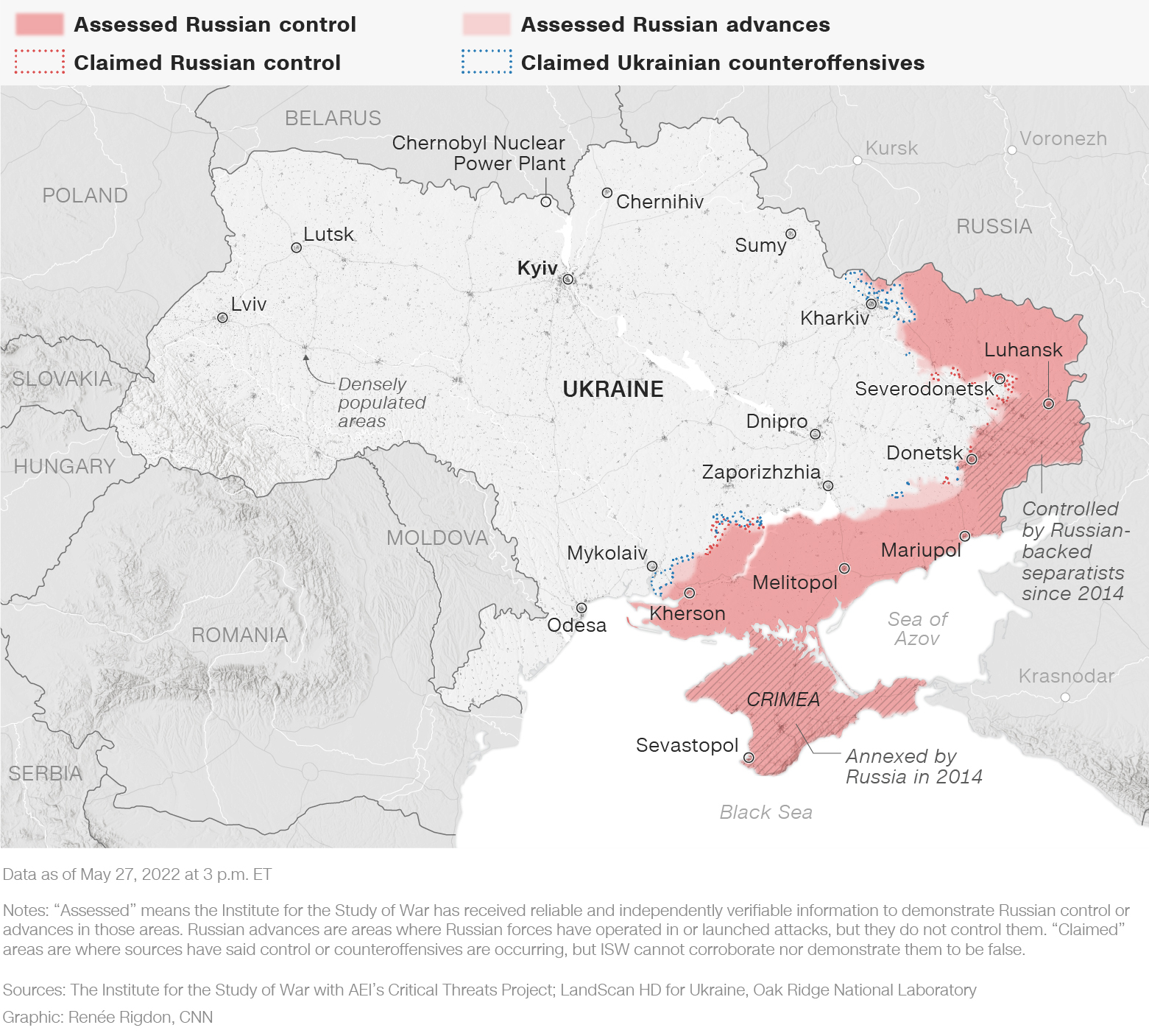 A separate update from regional officials said "the night was relatively calm" with "sporadic shelling," adding that three people were injured in villages to the northeast of Kharkiv city.

In the Sumy region in the northeast, Russia launched air strikes and artillery shelling, the military said. Separate regional updates on Sumy said there was no casualties from the attacks.

In southern Ukraine, in the Kryvyi Rih area, Russia continues artillery shelling of Ukrainian troop positions and is conducting a "counter-battery fight," the military said.

Around 85 kilometers (53 miles) to the southwest of Kryvyi Rih, regional officials said the center of Novyi Buh city was shelled overnight, injuring two people and damaging a shop, a pharmacy and some residential buildings. Further south, the shelling continues against Bereznehuvate, where a school and residential buildings were damaged.

In the southern Kherson region, a regional update said fighting continues and "the situation is tense" in nearby villages. There is no water or electricity in the villages which border the regions of Mykolaiv and Dnipropetrovsk, the statement added.

Along the Black Sea coast to the west in the Odesa region, a regional update said there were two missile strikes, one overnight and one on Monday morning. One missile was shot down by Ukrainian air defense forces. A non-functioning bridge was also hit, with no casualties reported, but damage was caused to several homes, the statement said.

Spanish Prime Minister Pedro Sanchez said Monday that NATO’s support for Ukraine is "unbreakable" as it has battled an invasion by Russian troops for more than three months.

"The atrocities in the war in Ukraine, and the death of innocent victims leads to condemnations (of Vladimir Putin) without reserve," Sanchez said. "Putin will not achieve his aims because NATO allies’ support of Ukraine is unbreakable."

Stoltenberg praised Spain’s contributions to NATO and looked ahead to NATO’s summit in Madrid at the end of June.

Stoltenberg said: "We will deepen our cooperation with like-minded countries and organizations, including the European Union and countries in the Indo-Pacific. We will also be joined by Finland and Sweden that just made historic applications to join our alliance."

Finland and Sweden have recently set aside their historic policies of non-alignment, citing the war in Ukraine, and made moves toward NATO membership.

Sanchez said the "unity of NATO is best to avoid an escalation" of the Ukraine war.

"Putin is trying to block the legitimate aspirations of Ukraine to advance on democracy. He has done it for only one reason, the threat that democracy represents to his regime is what he is really afraid of," Sanchez said.

Sanchez and Stoltenberg met over the weekend at a government retreat south of Madrid to discuss plans for the NATO summit next month, the prime minister’s press office said.

European Union officials are renewing efforts to agree on a Russian oil embargo on Monday, after a difficult weekend of talks ended in deadlock and delayed a sixth round of European sanctions against Moscow.

The EU’s 27 ambassadors failed to find an agreement on Sunday night, an official told journalists in Brussels, but talks continued on Monday ahead of an extraordinary meeting of European leaders later in the day.

The bloc has repeatedly struggled to get countries including Hungary on side when negotiating Russian sanctions, and Hungarian Prime Minister Viktor Orban has for weeks resisted the possibility of banning the import of Russian oil.

"I think what I've seen in the room is that there is a willingness from all member states to work on oil and to ban oil from European markets," an EU official told reporters Sunday.

"The question is, how to do it and how to cater for national specificities since some member states are more dependent on this than others."

"If you target oil, you have certain countries that are 100% dependent on Russian oil, and the phase out is quite a challenge. So, this is what you need to fine tune," the official said.

'Difficult' negotiations: In a separate briefing, a senior diplomat from an EU country told journalists that the technicalities of an oil embargo were "extremely difficult" to solve. And countries like Hungary, Croatia, Bulgaria, the Czech Republic and Slovakia were still seeking assurances over security of supply issues.

The senior EU diplomat also explained that, given the complexity of the oil sector across Europe, the EU has to "be very careful in the crafting of legislation and conclusions" in order to preserve the level-playing-field of the EU’s internal market.

The diplomat expected the issue of oil and the sixth round of sanctions to be discussed by leaders at the extraordinary European Council (EUCO) meeting Monday, but didn’t think the heads of state and government would be able to solve technical issues.

"I think we are now in the last stretch of trying to get this done," they added.

Where Hungary stands: While Orban ultimately agreed to the EU’s previous rounds of sanctions against Russia, he has repeatedly said he would not support a ban on Russian oil and gas.

"While we condemn Russia’s armed offensive and we also condemn the war, we will not allow Hungarian families to be made to pay the price of the war; and so the sanctions must not be extended to the areas of oil and gas," Orban said in a statement following bilateral talks in London with British Prime Minister Boris Johnson in March.

That position was a central plank in Orban’s campaign for re-election, which he secured in a poll in April. Hungary is heavily dependent on Russian energy and Orban has declined to condemn Putin’s invasion as unambiguously as most of his colleagues on the continent.

But there is growing frustration in Europe with his stance.

"Intense talks are ongoing" on a Russian oil embargo, German Vice Chancellor and Federal Minister for Economic Affairs Robert Habeck told CNN on Friday. But "the question is whether Viktor Orban, Hungary, [is] willing to stay in the solidarity of Europe and the transatlantic partnership, and right now it does not seem this way."

It's 2 p.m. in Ukraine, midday in London and 7 a.m. on the east coast. Here's the latest on Russia's war in Ukraine:

Three civilians were killed and several others wounded in fierce fighting in the Donetsk region of eastern Ukraine on Sunday, an update from the regional military administration for Donetsk said on Monday.

Russian forces shelled areas north of the city of Donetsk with small arms, tanks, artillery, mortars, and MLRS "Grad" rockets, the statement said. Some 24 buildings were also damaged, including 20 residential buildings, an electric substation and a shopping mall.

On Monday morning, there was also shelling in areas to the southwest of Donetsk city.

Water and electricity supply have been partially restored to the region, but there is currently no gas supply, the statement added.

In a separate update, the head of the Donetsk regional military administration, Pavlo Kyrylenko, spoke on national television on Monday.

"The situation is tense. The shelling along the front line does not stop," Kyrylenko said. "The hottest spots are Avdiivka, Toretsk, and Lyman direction. Active hostilities continue there. There is constant enemy shelling of Bakhmut, Soledar."

Kyrylenko said the key route from Bakhmut to Lysychansk is still under Ukrainian control, but the Russians are "constantly shelling the route." It is the main route for providing humanitarian goods and is important for evacuations, he added.

Some context: Donetsk is one of the separatist, pro-Russian regions to the east of Ukraine alongside Luhansk, where the Russian offensive has intensified in recent days.

On Thursday, Ukraine's armed forces acknowledged that Russian forces had made further advances in the Donetsk region, capturing a village about 10 miles southeast of the important town of Bakhmut.