Staring down the prospect of an extended stalemate in Ukraine, the US and its allies are placing a renewed emphasis on the need for a negotiated settlement to end the war as the conflict grinds into its 100th day with no clear victory in sight for either side.

US officials have in recent weeks been meeting regularly with their British and European counterparts to discuss potential frameworks for a ceasefire and for ending the war through a negotiated settlement, multiple sources familiar with the talks told CNN. Among the topics has been a four-point framework proposed by Italy late last month.

That framework involves Ukraine committing to neutrality with regard to NATO in exchange for some security guarantees, and negotiations between Ukraine and Russia on the future of Crimea and the Donbas region.

Ukraine is not directly involved in those discussions, despite the US commitment to "nothing about Ukraine without Ukraine." US and Ukrainian officials said the US has not been pressuring Ukraine to commit to a certain plan or directly pushing them to sit down with the Russians. 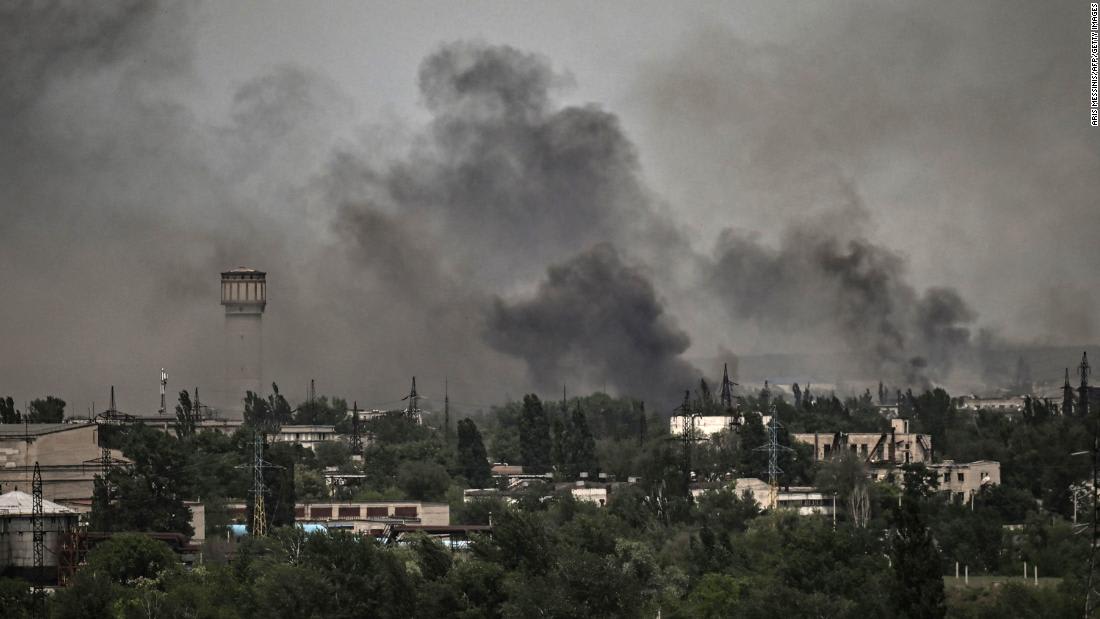 The Ukrainian military says Russian units are being reinforced on the approaches to Sloviansk as they prepare to resume an offensive toward the eastern city.

Neighboring Kramatorsk is the largest urban area in Donetsk still under Ukrainian control.

It's unclear whether the Russians have taken further territory to the east of Sloviansk after winning control of the town of Lyman late last month. The Ukrainian side says Russian forces have used artillery in two areas closer to Sloviansk — Shchurove and Brusivka.

In Severodonetsk, the General Staff said battles continue: "Under cover of artillery fire, the [Russians] stormed residential areas in the eastern part of the city. [The enemy] has partial success."

But the Russians had made no headway in their efforts to advance on other settlements in the pocket of territory that Ukrainian forces continue to defend — that includes Bakhmut, Soledar and Lysychansk. Once again, the General Staff said, the Russians had tried to cross the Siverskiy Donets River and "to create conditions for its crossing by the main forces of the force."

The river has proven to be a major barrier to Russian forces.

Fighting has picked up north of Kharkiv, where Ukrainian forces have regained territory in recent weeks. The General Staff reported that Russian forces were trying to "restrain the advance of our troops in the direction of the State Border. [The enemy] continued to fire on units of the Defense Forces using aircraft, artillery, multiple rocket launchers, mortars and tanks."

Russian action included an airstrike by Mi-8 helicopters at the positions of Ukrainian troops in the areas of the settlements of Slatyne and Dementiivka, rural settlements north of Kharkiv.

Ukrainian President Volodymyr Zelensky said in a brief video message Friday that Ukrainians have been defending their country for 100 days against Russian aggression and that "victory shall be ours."

"The leaders of parliamentary factions are here, the president's chief of staff is here, Prime Minister of Ukraine [Denys] Shmyhal is here, [presidential adviser Mykhailo] Podolyak is here, the president is here. Our team is much bigger. The Armed Forces of Ukraine are here. Most importantly, our people, the people of our country, are here," Zelensky said.

"We have been defending Ukraine for 100 days. Victory shall be ours. Glory to Ukraine," he added.

The message echoes a video from the president shortly after Russia's invasion began in February, with Zelensky flanked by his staff on a street in Kyiv, saying "we are all here."

US President Joe Biden said it was up to Ukraine when asked whether the nation needs to cede part of its territory to achieve peace and end the Russian invasion, telling reporters Friday that “I’m not going to tell them what they should and shouldn’t do.”

“From the beginning, I’ve said — and not everyone’s agreed with me — nothing about Ukraine without Ukraine. It’s their territory. I’m not going to tell them what they should and shouldn’t do,” Biden said in Rehoboth, Delaware.

Biden did add that it “appears” at some point there will need to be a “settlement” between the two countries, adding “what that entails, I don’t know.”

Biden said that in the meantime, the United States will continue to put Ukrainians in a position where they can defend themselves.