There is a “clear and present risk to the safety, security and safeguards” at Ukraine’s Zaporizhzhia nuclear power plant, which is currently controlled by Russia, the head of the United Nations nuclear watchdog said Monday.

Rafael Mariano Grossi, director general of the International Atomic Energy Agency (IAEA), said that “at least five of the seven indispensable pillars of nuclear safety and security have been compromised at the site.”

In remarks to the IAEA’s Board of Governors, Grossi reiterated that he was “working actively to agree, organize and head an IAEA-led International Mission” to the facility, in order to “carry out essential nuclear safety, security and safeguards work at the site.”

“Ukraine’s Zaporizhzhia NPP site remains under the control of the Russian forces there. I have repeatedly expressed my grave concern at the extremely stressful and challenging working conditions under which Ukrainian management and staff are operating the plant," Grossi said.

“The situation at Zaporizhzhia NPP has not only raised serious and pressing humanitarian concerns but is also a clear and present risk to the safety, security and safeguards at the nuclear power plant.”

“There are indications from Ukraine regarding their concern about interruptions in the supply chain of spare parts to Zaporizhzhia NPP. This means now at least five of the seven indispensable pillars of nuclear safety and security have been compromised at the site. The Ukrainian regulator has informed us that they have ‘lost control over’ the facility’s nuclear material that is subject to the Safeguards Agreement between Ukraine and the IAEA," he added.

He concluded by saying that “the urgent need for us to be there is clear to all.”

Ukraine's military intelligence chief has visited the embattled city of Severodonetsk amid reports that the Ukrainian position there has worsened.

The country's defense ministry said Monday that Maj. Gen. Kyrylo Budanov has been to the eastern city, though it is unclear when the visit took place.

Some background: After reclaiming territory from Russia over the weekend, the Ukrainian position in Severodonetsk has deteriorated on Monday, the region’s top official said on Ukrainian television Monday.

“The fiercest battles continue here,” Serhiy Hayday, head of Luhansk Regional Military Administration, said on Monday morning. “Our defenders managed to counterattack for a while ­-- they liberated almost half of the city. However, now the situation has worsened for us again.”

Hayday said that the Russians are using “standard scorched-earth tactics,” and that evacuation of the approximately 15,000 civilians remaining in the city is impossible because of intense fighting.

“Budanov got acquainted with the operational situation on this section of the front and determined the further actions of the units of the Main Intelligence Directorate of the Ministry of Defense of Ukraine.”

The statement added that that Russia is targeting most of its shelling at the neighboring city of Lysychansk, which sits on strategic high ground across the Siverskyi Donets River from Severodonetsk.

An increasing number of civilians are now ready to evacuate from the Ukrainian-controlled Donetsk region, the top regional official said on Monday.

“People who didn't try, and didn't want, to leave in the beginning when it was safer are leaving now,” Pavlo Kyrylenko, head of the Donetsk Regional Military Administration, said on Ukrainian television.

“We evacuate them both from frontline settlements and from the cities of Bakhmut, Soledar, and Slovyansk. Now the pace has increased," he said.

Some background: Fighting in the eastern Donetsk and Luhansk regions has intensified in recent weeks, with stepped-up Russian attacks on the city of Sloviansk, and an intense urban battle for Severodonetsk, the eastern-most city controlled by the Ukrainian government.

A CNN team in eastern Ukraine on Monday saw long lines of civilian cars driving west from the Ukrainian-controlled portion of the Donetsk region.

“Every day we evacuate people, even from the frontline. This is much more difficult to do under or between shelling, because the movement of an evacuation bus or a small car does not mean that the occupiers will not shoot at it," he said.

He said that the front line in the Donetsk region “has remained unchanged over the past day,” and that “almost every day we have civilian casualties.”

After reclaiming territory from Russia over the weekend, Ukrainian forces in the eastern city of Severodonetsk are under renewed attack, the region’s top official said on Monday.

“Our defenders managed to counterattack for a while ­– they liberated almost half of the city. However, now the situation has worsened for us again.”

Hayday said the Russians are using “standard scorched-earth tactics,” and that evacuation of the approximately 15,000 civilians remaining in Severodonetsk is impossible because of intense fighting.

He said Russia is targeting most of its shelling at the neighboring city of Lysychansk, which sits on strategic high ground across the Siverskyi Donets River from Severodonetsk.

“From there, it is much easier to defend and maintain a defensive line,” Hayday said. “They are still destroying houses and humanitarian aid centers.”

He said a further 15,000 civilians remained in Lysychansk and that police are managing to evacuate a small number of them

Finally, he said that Russia has devoted a “simply incredible” number of troops and equipment to bombarding the main access road to Lysychansk and Severodonetsk, which runs between Bakhmut and Lysychansk.

“The Russians do not control this road, but the entire route is being shelled,” he said. “The Russians have amassed huge reserves. Time will tell whether they will have enough strength to take this route.”

A Russian missile attack on Kyiv on Sunday was likely an attempt to disrupt the supply of Western military equipment to frontline Ukrainian units, the UK's Ministry of Defense said in its latest intelligence assessment on Monday.

One of the missiles was intercepted by Ukraine’s air defense unit, but the rest hit “infrastructure facilities in the north of the Ukrainian capital,” the General Staff of Ukraine's armed forces said on Sunday.

Vadym Denysenko, an adviser to Ukraine's Minister of Internal Affairs, said one military target was hit, and one civilian target.

Several of the missiles hit the Darnytsia Carriage Repair Plant, injuring one railway worker, according to Oleksandr Kamyshin, CEO of the Ukrainian state railway enterprise Ukrzaliznytsia.

But passenger trains were not delayed by the attacks, he said.

Kamyshin denied Russian reports that his company was housing military equipment, and invited journalists to verify that by visiting the plant.

The UK Ministry of Defense also said that heavy fighting continues in the eastern city of Severodonetsk and that Russian forces continue to push towards the eastern Ukrainian city of Sloviansk in the Donetsk region.

Russian forces have likely moved multiple air defense assets to Snake Island in the Black Sea, including SA-15 and SA-22 systems and it is likely that these weapons are intended to provide air defense for Russian naval vessels operating around Snake Island, the ministry said.

Russia's activity on Snake Island contributes to its blockade of the Ukrainian coast and hinders the resumption of maritime trade, including exports of Ukrainian grain,” it added.

A CNN team driving east from Dnipro on Monday morning saw long lines of civilian cars driving west from the Ukrainian-controlled part of the Donetsk region.

Fighting in the eastern Ukrainian Donetsk and Luhansk regions has intensified in recent weeks, with stepped-up Russian attacks on the city of Sloviansk, and an intense urban battle for Severodonetsk, the eastern-most city controlled by the Ukrainian government.

As Russian forces closed in on Hostomel in late February, the town's mayor Yurii Prylypko urged local residents to take care of each other.

I'm here with you. We have to resist," he said in a video message. "The weapons are coming. Our soldiers are coming. We will get through this. We just need to keep calm and protect the people around us. Thank you!"

Days later, Prylypko was dead. He and another civilian, Ivan Zorya, were killed by Russian soldiers, eyewitnesses say, as they tried to deliver medicines and other supplies to people in the community. Another civilian, Oleksandr Karpenko, was killed while trying to save them.

Russia has consistently denied targeting civilians during its invasion of Ukraine.

But photos of the scene taken in its aftermath and images captured by security cameras on the day of the attack make it clear the mayor was traveling in a civilian car when Russian troops opened fire. There were no other cars or military vehicles nearby at the time, according to the eyewitnesses.

As part of an investigation into the three men's deaths, CNN spoke to three eyewitnesses to the attack on March 3 and to several other local residents who saw Prylypko's and Zorya's bodies lying on the street in the days following the shooting. 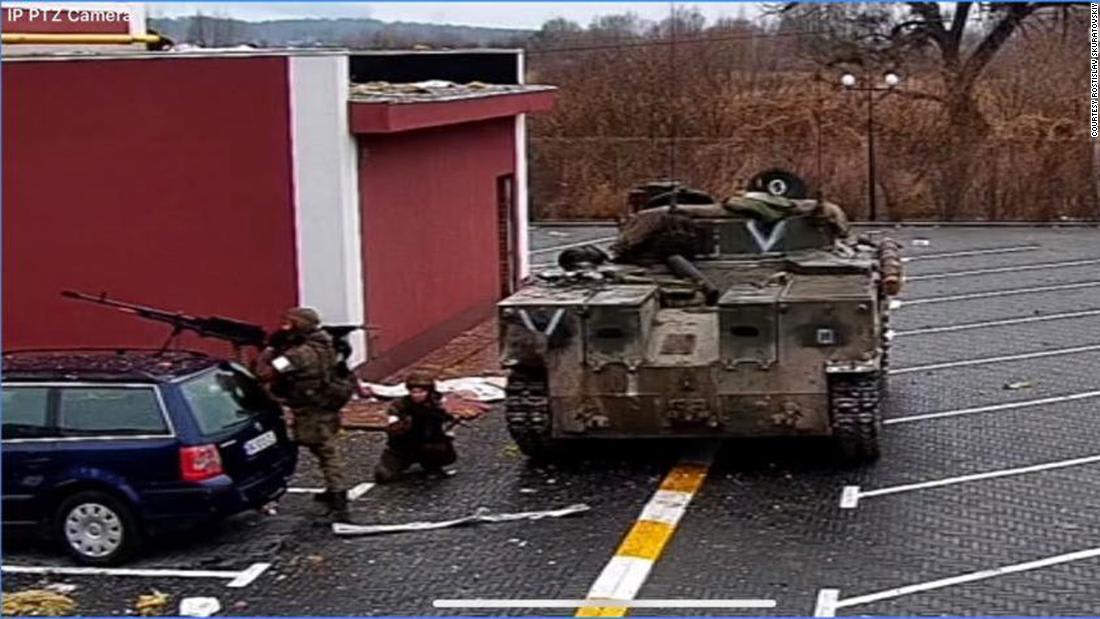 Russia is intensifying its efforts to gain control of eastern Ukraine, with heavy fighting in the Donbas regions of Donetsk and Luhansk. Meanwhile, Russian President Vladimir Putin has warned Moscow will strike new targets if the United States supplies long-range missiles to Ukraine.

Ukrainian President Volodymyr Zelensky said he visited troops in some of the most heavily bombarded frontline positions Sunday.

In his nightly address, Zelensky said: "We were in Lysychansk and we were in Soledar."

Both places have been under heavy Russian attack for weeks, suffering missile, rocket and aerial bombardment.

"I am proud of everyone I met, shook hands with, communicated with and supported. Something was brought for the military, but I will not detail it," he said. "And I brought something from them -- to you. It is important: confidence and strength."

Earlier Sunday, Zelensky was in the southern city of Zaporizhzhia, where he said he'd met the mayors of some occupied towns.

"I met with Mariupol residents who managed to leave the city alive and with children. I met them in Khortytsia. Conditions are temporary but not bad," he said. "Each family had its own story, most without men. Someone's husband went to war, someone in captivity, and someone, unfortunately, died."