Russian forces in Mariupol have begun paying pensions in Russian rubles, using cash, an adviser to that city’s Ukrainian mayor said on Thursday.

“It is now known that the occupiers have already delivered trucks with cash,” Petro Andrushchenko said on national television. “Russian pensions are being handed to pensioners in Russian rubles – which shows very well what the Russian economy is, that such a sum of money can be stupidly brought in cash and start handing out.”

“But you understand what's going on there: Huge queues, fights, scandals, because of the heat, because there is no organization really. That is, no process is organized,” he said.

Andrushchenko is not in the city but has been a reliable conduit for information from Mariupol.

Russian state news agency RIA Novosti has reported that around 46,000 applications for pension payments have been received, and that the self-declared Donetsk People's Republic has begun paying out those benefits.

Andrushchenko said that those figures can “more or less” be trusted.

“But we must add another 20 to 30 percent of our elderly Mariupol people who do not accept the occupation and deliberately did not submit documents, and another 5 percent who could not physically come and submit documents. This is a critical amount for the city in which it is located,” he said.

Ukrainian President Volodymyr Zelensky has called for Russia to be expelled from the United Nations’ Food and Agriculture Organization over the impact its war in Ukraine has had on global food insecurity.

The call is likely largely symbolic. All 193 UN member nations are also members of the FAO.

“There can also be no question of Russia's continued membership in the FAO – the Food and Agriculture Organization of the United Nations,” Zelensky said during a speech Thursday to the Organisation for Economic Co-operation and Development. “What has Russia to do there if it is working for starvation of at least four hundred million and at most more than a billion people?”

The war in Ukraine could increase the number of “acute food insecure people” around the world by 47 million this year, to a total of 323 million, according to new projections in a joint report by the FAO and World Food Programme.

Kremlin spokesperson Dmitry Peskov said Thursday that no agreement had been reached yet on exporting Ukrainian grain to Turkey or the Middle East.

“No agreements have been reached yet. Work is underway,” he said on a regular conference call with journalists, commenting on possible grain deals with Turkey or the Middle East.

Peskov couldn’t confirm to CNN that the first rail cars carrying Ukrainian grain from the Russian-occupied city of Melitopol have departed, saying he had “no information” about it.

A leader in the Russian-backed military administration of the occupied portion of Zaporizhzhia region said Wednesday that the first railway wagons with grain had left from Melitopol and went through Crimea “in the direction of the Middle East.”

The Ukrainian Agrarian Council accused Russia of stealing about 600,000 tons of Ukrainian grain, which Russia denies.

Global leaders have condemned a months-long blockade by Russian forces at key ports in Ukraine — including Mariupol on the Sea of Azov and Odesa on the Black Sea — which has left more than 20 million tons of grain stuck inside the country.

The European Commission has announced another 205 million euros ($220 million) in aid for Ukraine, due to the "soaring" humanitarian crisis in the country.

"This brings the total EU humanitarian assistance in reaction to the war to 348 million euro, of which 13 million is dedicated to Moldova to support displaced people arriving in the country," according to Balazs Ujvari, the EU Commission's spokesperson for budget and human resources, humanitarian aid and crisis management.

Acknowledging that Russia has the wherewithal to continue advancing on some parts of the frontline, Ukraine’s defense minister on Thursday said that he is dissatisfied with the “tempo and quantity” of weapons arriving to Ukraine.

“The situation at the front lines is difficult,” Oleksiy Reznikov said in a statement on Facebook.

“The Kremlin continues to press by sheer mass. It stumbles and faces strong rebuff. It suffers huge casualties," he said. "But yet still has forces to advance in some parts of the front.”

Echoing President Volodymyr Zelensky's previous comments, Reznikov said that up 100 Ukrainian soldiers were being killed every day, and up to 500 wounded.

Ukraine, he said, had “already received, bought on the market, manufactured and handed over to the Armed Forces of Ukraine a significant number of weapons.”

“These numbers would have been enough for a victorious defence operation against any army in Europe. But not against Russia. The Russian Moloch still has a lot of means for devouring human lives for to satisfy its imperial ego," said Reznikov.

“That is why we emphasize: Ukraine desperately needs heavy weapons, and very fast. We have proved that, unlike many others, we do not fear the Kremlin," he said. "But as a country we cannot afford to be losing our best sons and daughters.”

Russia has taken control of most of the strategic city of Severodonetsk, say Ukrainian officials, while concerns are growing over a looming global food crisis caused by the war.

Here are today's latest headlines from the Russia-Ukraine war: 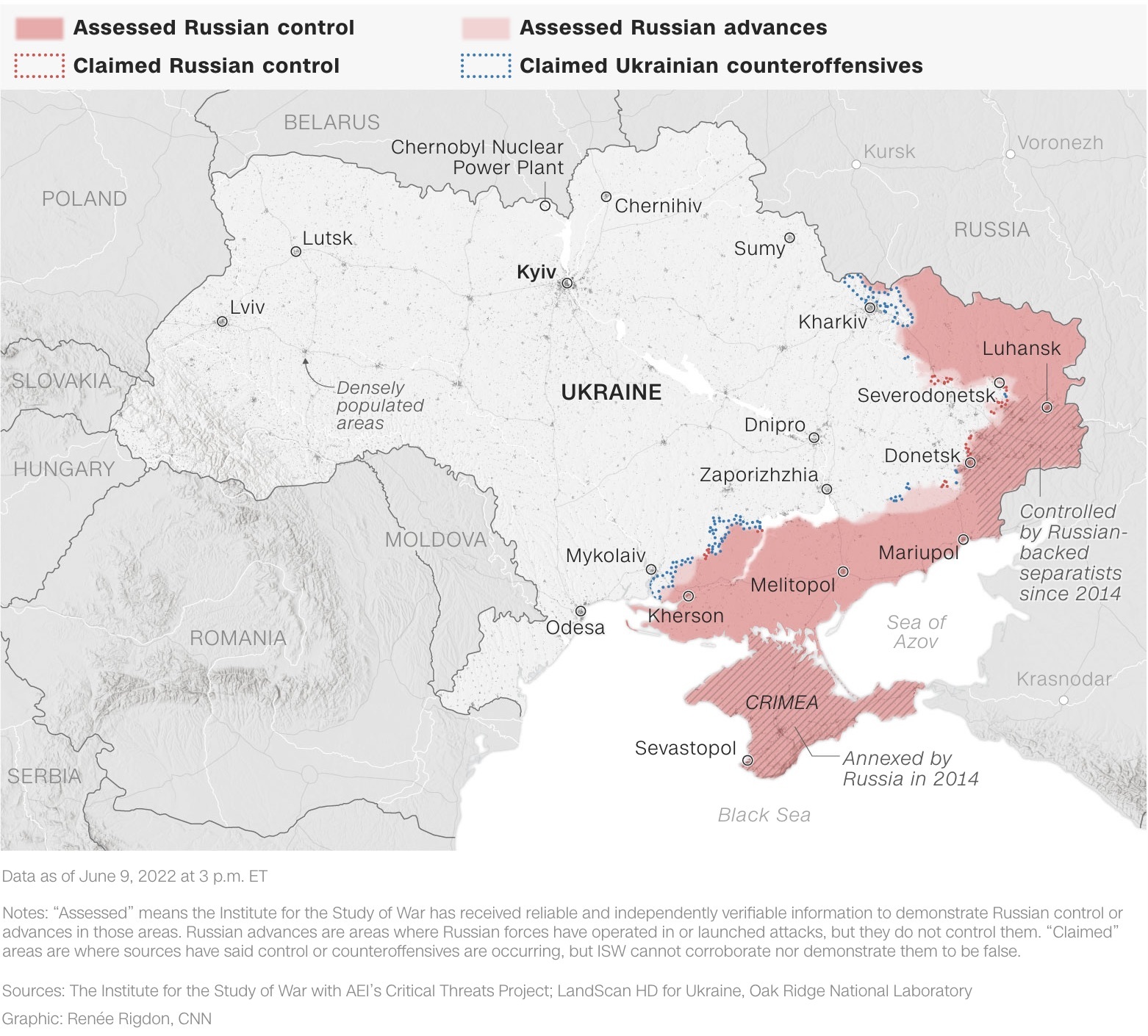 The conflict in Ukraine could increase the number of “acute food insecure people” around the world by 47 million this year, to a total of 323 million, according to new projections from the United Nations.

The war has disrupted vital agricultural production and exports, and increased energy prices, which all have an impact of the availability and price of food, according to a joint report from the UN’s Food and Agriculture Organization (FAO) and World Food Programme (WFP).

Food prices have risen by 17% since January, according to the FAO price index. The price of cereals is up by more than 21%.

That 47 million would come on top of the 276 million people that WFP estimates were already facing acute hunger before the war. The largest increases are likely to be seen in sub-Saharan Africa, according to the report.

In the five years before the war, the two countries on average were responsible for 19% of global barley production, 14% of wheat and 4% of maize. Africa and the Middle East are particularly dependent on Ukrainian and Russian wheat exports.

“In March 2022, almost half of the area planted with winter wheat and about 40 percent of area planted with rye for the 2022 harvest were in occupied or war-affected areas. While areas affected by direct fighting have shifted, the uncertainty about damages, losses and the actual harvestable area remains. Between 20 and 30 percent of these areas may remain unharvested in 2022,” according to the report.

When Ukrainian forces regained control of Katyuzhanka, a village north of Kyiv that had been under Russian occupation for more than a month in March, they found the local school wrecked. Any equipment that hadn't been stolen was smashed, there was a makeshift cemetery in the school yard and deep trenches had been dug across the football pitch.

Inside one of the destroyed classrooms, written in chalk on a big, green blackboard hanging on the wall just below a portrait of Isaac Newton, was a letter addressed to the pupils and signed "the Russians."

It read: "Children, we're sorry for such a mess, we tried to save the school, but there was shelling. Live in peace, take care of yourselves and don't repeat the mistakes your elders made. Ukraine and Russia are one people!!! Peace be with you, brothers and sisters!"

The note, written in Russian, as opposed to Ukrainian — the school's language of instruction — was one of several left on blackboards and whiteboards scattered around the building. "We are for the peace in the whole world," another one said.

Mikola Mikitchik, the principal of the Secondary School of Katyuzhanka, told CNN last month he felt disgusted when he found the notes.

"They wrote 'Russians and Ukrainians are brothers' and at the same time they robbed the school ... they ruined computers, they took out hard drives, they took away laptops, printers, they left nothing at the school! It's barbarism and hypocrisy," he said. 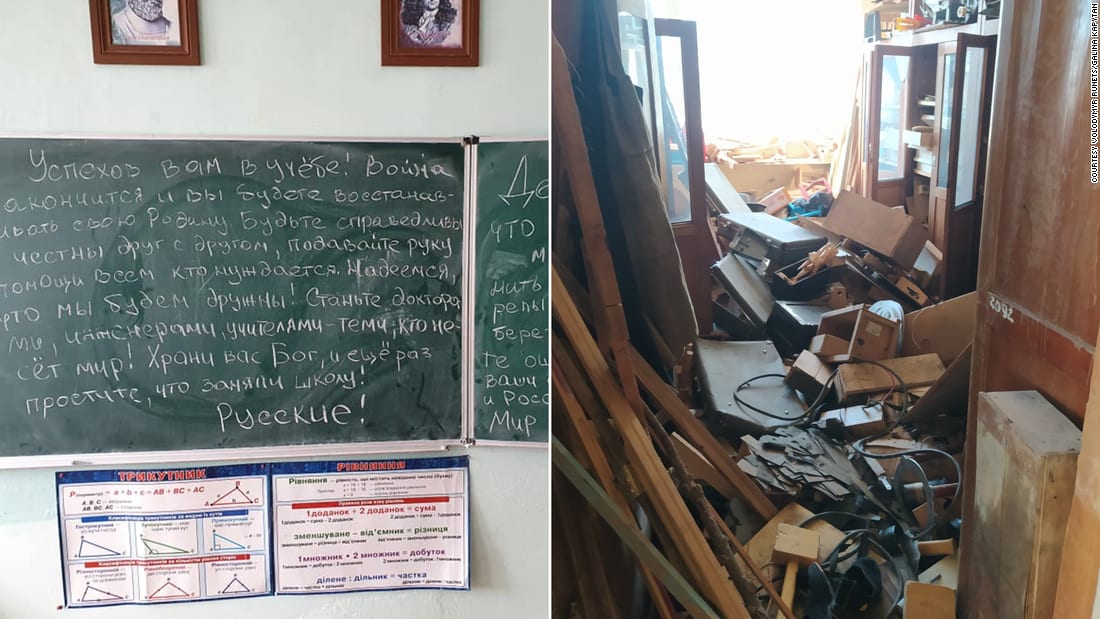 Russian soldiers smashed up their school. Then they purportedly left messages for pupils urging peace

The integration of the Ukraine’s Kherson region into Russia is underway, the Russian-appointed leader of the region claimed on Thursday.

“We are sure that Russia is with us, and we are with Russia forever,” Vladimir Saldo said via Telegram. “Integration has begun and will continue intensively.”

Saldo offered no further details on what “integration” means.

The city of Kherson, in the south of Ukraine, has been under Russian control since the early days of the invasion.

But the Ukrainian military has in recent weeks stepped up its counterattacks on Russian positions in the Kherson region.

“We feel that we are already together with Russia,” Saldo said. “There is confidence that in a common big family all problems will be solved systematically and we will adequately respond to all requests of the time.”