Amnesty International has accused Russia of war crimes during its efforts to capture the north-eastern Ukrainian city of Kharkiv.

In a new 40-page report, Amnesty has documented the alleged use of cluster munitions and other indiscriminate means of attack.

“The repeated bombardments of residential neighbourhoods in Kharkiv are indiscriminate attacks which killed and injured hundreds of civilians, and as such constitute war crimes,” the report said.
“This is true both for the strikes carried out using cluster as well as those conducted using other types of unguided rockets and unguided artillery shells, which are indiscriminate when used in the vicinity of concentrations of civilians.”

Amnesty’s researchers say they “documented seven strikes in different areas of Kharkiv, where they found fins and pellets of 9N210 or 9N235 cluster munitions.”

Some context: The United Nations Convention on Cluster Munitions, which came into force in 2010, bans the use of cluster munitions. Russia is not party to the treaty (neither is the United States).

“Cluster bombs are inherently indiscriminate,” Amnesty’s report said.
"Rockets release dozens of submunitions in mid-air, scattering them indiscriminately over a large area measuring hundreds of square metres. In addition, cluster munitions have a high dud rate, with a high percentage failing to explode on impact and thus effectively becoming land mines, which pose a threat to civilians long after deployment.”

Amnesty also said that Russia has used the PTM-1S, “a small, scatterable anti-personnel mine.”

“People have been killed in their homes and in the streets, in playgrounds and in cemeteries, while queueing for humanitarian aid, or shopping for food and medicine,” she said. “The repeated use of widely banned cluster munitions is shocking.”

Russian officials have repeatedly insisted that they do not target civilians.

The International Atomic Energy Agency (IAEA) said on Sunday that it is once again getting remote data transmission from the Zaporizhzhia nuclear power plant, which is currently in Russian-held territory.

The transmission of “vital safeguards data” from the plant was cut on May 30 and restored on Sunday, the IAEA said.

“The images recorded by IAEA surveillance cameras during this time period are now being downloaded for review by agency inspectors to confirm that continuity of knowledge has not been lost," it said.

The power plant has been under Russian control since early March, but is still operated by its Ukrainian staff.

IAEA Director General Rafael Mariano Grossi said on Sunday that he was continuing to appeal for an in-person trip to the power station “as soon as possible to carry out essential nuclear material verification activities which cannot be done remotely.”

Asked about whether a visit would legitimize Russia’s control of the plant, Grossi told CNN’s Becky Anderson last week that “it is absolutely incorrect. When I go there, I will be going there under the same agreement that Ukraine passed with the IAEA, not the Russian Federation. Ukraine!”

At first glance Bakhmut doesn’t look like a city at war.

As we drive into the city in the Donetsk region of eastern Ukraine on a warm sunny morning, men in orange vests tend to the roses. The tall trees shading the streets are thick with leaves.

Traffic is light because of fuel shortages, so many residents get around on bicycles.

This peaceful façade, however, is deceptive. Explosions regularly echo over Bakhmut: the blasts of outgoing and incoming artillery and rockets outside, and occasionally inside, the city.

Tetyana volunteers with the bread distribution. When I ask if she intends to stay in Bakhmut if Russian forces push closer, her demeanor changes. She shakes her head.

“We love our town. Our graves are here. Our parents lived here. We won’t go anywhere,” she insists, her voice quivering. Tears well up in her eyes. “It’s our land. We won’t give it up to anyone. Even if it’s destroyed, we’ll rebuild. Everything will be…” and here she gives two thumbs up. 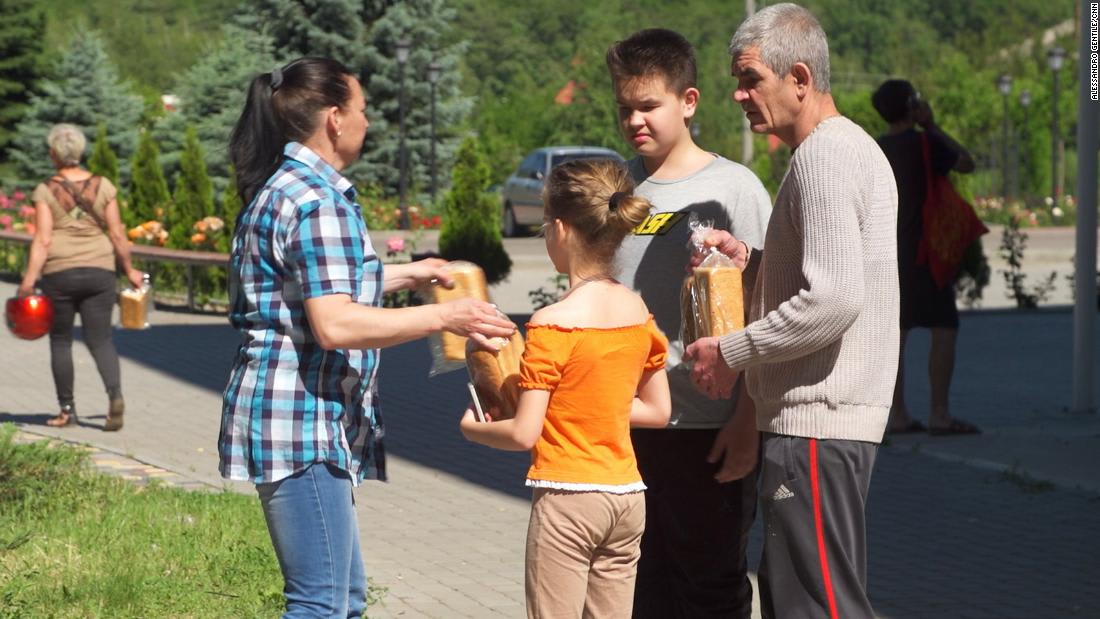 Russians are on the verge of capturing key Ukrainian city. In neighboring Bakhmut those with nowhere else to go brace for their arrival

Reading Russian President Vladimir Putin’s mind is rarely a straightforward task, but on occasion the Kremlin leader makes it easy.

Such was the case on Thursday, when Putin met with a group of young Russian entrepreneurs. Anyone looking for clues as to what Putin’s endgame for Ukraine might be should read the transcript, helpfully released here in English.

Putin’s words speak for themselves: What he is aiming for in Ukraine is the restoration of Russia as an imperial power.

Many observers quickly picked up on one of Putin’s more provocative lines, in which he compared himself to Peter the Great, Russia’s modernizing tsar and the founder of St. Petersburg – Putin’s own birthplace – who came to power in the late 17th century.

“Peter the Great waged the Great Northern War for 21 years,” a relaxed and apparently self-satisfied Putin said. “On the face of it, he was at war with Sweden taking something away from it… He was not taking away anything, he was returning. This is how it was.” 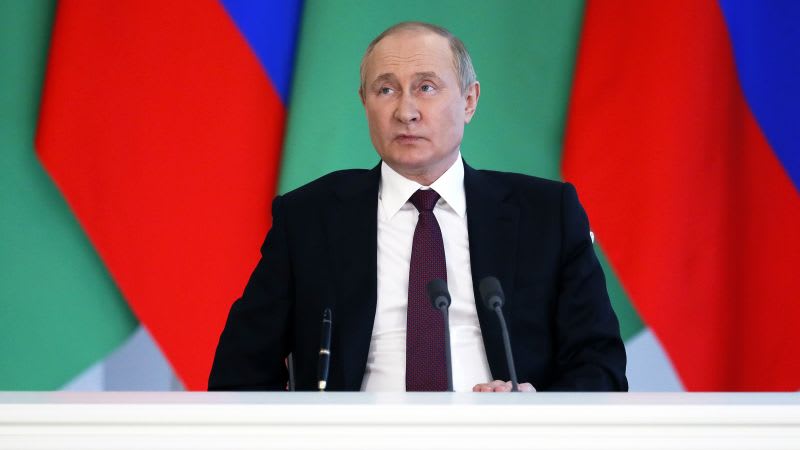 Restoration of empire is the endgame for Russia's Vladimir Putin | CNN

Russia could encircle Severodonetsk within days and plans to "completely cut off" the key eastern city, according to Ukrainian military officials.

Here are the latest headlines on the war in Ukraine:

Kirby said the administration of US President Joe Biden and partner nations are working to overcome an export blockade that’s causing a global food shortage.

“It absolutely has weaponized food — Mr. Putin has weaponized food, and we are working hard with the international community and the UN to find ways to be able to get that grain out there and on the market where it belongs,” Kirby told CNN in an interview.

Russia’s export blockade, Kirby acknowledged, “is going to have a global impact.”

“We're going to feel some of that probably here as well, which is why we're working so hard on trying to find out find alternative routes to get some of that grain out," he said.

Earlier this week, CNN reported Russia's war in Ukraine could push up to 49 million people into famine or famine-like conditions because of its devastating impact on global food supply and prices, per UN estimates.

The United Kingdom’s Foreign, Commonwealth and Development Office told CNN it is supporting the family of a former British Army soldier who was killed fighting in Ukraine.

His death was announced by his family on Saturday.

“Yesterday we received the devastating news that our son, Jordan, has been shot and killed in the city of Severodonetsk, Ukraine,” Dean Gatley wrote, adding his son left the British Army in March to “continue his career as a solider in other areas.”

Gatley went to Ukraine “to help” after careful consideration, according to his father’s post.

“His team say they all loved him, as did we, and he made a massive difference to many people’s lives, not only soldiering, but also by training the Ukrainian forces,” his father wrote.

The post continued with his father writing that his son often told him the missions were “dangerous, but necessary.”

He loved his job and we are so proud of him,” the post ends.

Ukrainian presidential adviser Mikhailo Podolyak tweeted on Sunday that, "it takes a lot of courage to leave home and go thousand miles to defend what you believe in."

“Just because the heart says so. Because you can't stand the evil. Jordan Gatley was a true hero. We will always remember his contribution to the protection of Ukraine and the free world,” Podolyak said.

An explosion near the Ministry of Internal Affairs building in Russian-occupied Melitopol in Ukraine’s southern Zaporizhzhia region injured at least four people, according to a local official.

The pro-Russian deputy head of the Internal Affairs Ministry, Alexey Selivanov described the blast in a Telegram post as a “terrorist” act by what he called “Ukrainian militants."

An IED was hidden in a trash can near to the ministry building, and a girl walking past was seriously injured, along with at least one man, Selivanov said. He also said security forces were on the scene.

Ukraine’s Commander-in-Chief of the Armed Forces told his US counterpart that Russia was concentrating its main efforts in the northern part of the Luhansk region, in the country's east.

Valerii Zaluzhnyi briefed General Mark A. Milley, the US chairman of the Joint Chiefs of Staff, on the latest battlefield updates in Ukraine, he said in a Telegram post on Sunday.

He also said Russia was using “artillery en masse and unfortunately has a tenfold fire superiority" but that Ukraine was holding its positions there.

Remember: Luhansk region in eastern Ukraine is at the epicenter of the conflict. Much of the area is already under Russian control.

In the east: Zaluzhnyi described the situation in Luhansk as “complicated, in particular, in the city of Severodonetsk. Up to seven battalion tactical groups were deployed by the enemy there. Despite the heavy fire, we managed to stop the enemy."

In the north: Zaluzhnyi said in northern and northeastern Ukraine, Russian forces “resumed shelling the residential areas of Kharkiv, which requires us to take adequate action.”

He asked General Miley “to help us get more 155 mm caliber artillery systems in the shortest possible time."