The European Union and Norway agreed on Thursday to further strengthen their cooperation in the energy field, providing the EU with additional gas supplies, Norway's oil and energy ministry said.

“We had a good and constructive meeting, where we agreed to cooperate even closer on energy. Russia’s invasion of Ukraine has made closer cooperation necessary,” said Norwegian Minister of Petroleum and Energy Terje Aasland.

Some background: Europe's energy crisis escalated this month as Russia further reduced supplies to Germany, Italy and other members of the European Union. Twelve EU countries have so far been affected by Russian gas supply cuts, the bloc's climate policy chief Frans Timmermans said on Thursday.

Russia's state gas company Gazprom slashed flows through the Nord Stream 1 pipeline to Germany by 60% last week, blaming the move on the West's decision to withhold vital turbines because of sanctions. Italian energy giant ENI said Gazprom was cutting its supplies by 15%.

A joint statement from the EU and Norway noted that “Norway’s oil and gas production for European energy security has increased further after Russia's unjustified and unprovoked war of aggression against Ukraine.”

According to the statement, Norway currently delivers approximately one-fourth of EU countries’ gas consumption and is producing gas “at very high capacity.”

The Russian Minister of Defense Sergei Shoigu on Thursday called to strengthen the joint defense capabilities of Russia and Belarus, including a unified regional air defense system.

“Circumstances dictate the need to take urgent joint measures to strengthen the defense capability of the Union State, increase the combat readiness of the regional grouping of troops and the unified regional air defense system,” he said at a meeting with Belarusian Defense Minister Viktor Khrenin in Moscow.

Alexander Lukashenko, a close ally of Russian President Vladimir Putin, is the only leader in Europe to support Russia’s invasion of Ukraine. The Belarusian border with Ukraine was used as part of the invasion by Russian troops.

The Biden administration is expected to publicly announce another round of military assistance for Ukraine as soon as today, according to a US official familiar.

The White House said they don’t have anything to preview at this time but has stated that the Biden administration has said the US will continue to regularly provide security assistance to Ukraine.

“NIKE, Inc. has made the decision to leave the Russian marketplace. Our priority is to ensure we are fully supporting our employees while we responsibly scale down our operations over the coming months," it said in an emailed statement to CNN.

Nike’s withdrawal from the Russian market was also shared in its official Russian website.

The withdrawal means that along with stores shutting down, the company's website and mobile app will no longer be available in the country, it added.

Many other American companies announced similar decisions since Russia's invasion of Ukraine began. Starbucks and McDonald's, for example, had made similar decisions earlier. Several auto, finance, energy and other companies have also announced different levels of changes, pauses or halts in operations in Russia.

The Ukrainian military said the situation in the city of Severodonetsk is “difficult” but “stable,” according to Oleksii Hromov, the deputy head of the Main Operations Directorate of Ukraine’s General Staff of the Armed Forces of Ukraine.

“As of now, the situation is difficult, stable, the fighting is ongoing,” Hromov told journalists in a briefing Thursday.

“Our servicemen have weapons at their disposal and are supported by artillery units, but unfortunately the enemy has the fire advantage,” he said. “[Russia] has enough artillery systems, enough munition, they inflict massive fire strikes, but our servicemen skillfully maneuver among the fortified positions.”

Hromov conceded that Russia had damaged Ukraine’s supply routes into the city, but he said military leadership had found alternative ways to send ammunition in and bring out the wounded.

Russian forces are gaining an advantage in eastern Ukraine as they learn from mistakes made during the earlier stages of their invasion of the country, including better coordinating air and ground attacks and improving logistics and supply lines, two US officials with direct knowledge of US intelligence assessments told CNN.

The US does not expect new weapons systems recently supplied to Ukrainian forces, including the HIMARS multiple rocket launch system, to immediately change the situation on the battlefield in part because those systems are so far being sent with both a limited range and a limited number of rockets to ensure they are not fired into Russian territory. Additionally, Russian forces have been able to destroy some of the new Western-supplied weapons, including M777 howitzers, in targeted attacks.

The US assessments, which increasingly envision a long and punishing battle in eastern Ukraine, come as the months-long war there has reached a pivotal moment in recent days. Ukraine’s military has been burning through Soviet-era ammunition that fits older systems, and Western governments are facing a tough decision on whether they want to continue increasing their assistance to the country.

The US assessments paint a dismal image of the future of the war, with high personnel and equipment losses on both sides. US officials believe that Russian forces plan to maintain intense attacks in the east, characterized by heavy artillery and missile strikes, with the intention of wearing down Ukrainian forces and NATO resolve over time.

Russia’s advancements were brought into plain view in recent days after Ukraine’s defense of Lysychansk – the last city in the Luhansk region it still holds – became a lot more tenuous. In the last couple of days, Russians have advanced into several villages south of Lysychansk, though not without sustaining losses from Ukrainian artillery fire.

Celebrity chef Rachael Ray is helping deliver aid in Lviv, Ukraine, because she said she felt it was a "moral imperative."

She described going around different parts of Ukraine.

"I've been to the bus terminals and train stations and seen the faces of people that walk up to 11 days with dogs and their children and get on buses with what's left of their lives — professionals that had full beautiful lives, and all they wanted to be was free, and their lives are in bags," she said while sitting in a classroom at an orphanage in Lviv.

Ray said she brought necessary first aid, thousands of toys for kids and treats for dogs and cats in shelters.

Her hope, she told CNN, is to keep the conversation about Ukraine alive.

"We have so much going on in our country now, in the US, that is distracting us and tearing us apart. We have to keep [Ukraine] at the forefront. Because these folks are giving up everything in their lives to defend democracy for all of us. And we can be mindful and donate a little or a lot, our time or just share the work that they are doing," she said.

Just 45% of the region of Donetsk are under the control of Ukrainian forces, leaving the other 55% under Russian control.

“It is very difficult to say the rest [of the cities/territories in Donetsk] are controlled by the enemy, because these cities are being destroyed by the enemy — they are just territories,” Pavlo Kyrylenko, the head of the Donetsk region military administration, said Thursday.

Kyrylenko also spoke about a concentration of battalion tactical groups in the Sloviansk and Lyman.

Ukrainian forces have “serious battles ahead," he said, adding that a continuation of shelling along the Bakhmut-Lysychansk highway is underway to “cut off” Severodonetsk and Lysychansk from supplies.

A two-day summit is underway in Brussels with European Union leaders meeting to decide whether to grant EU candidate status to Ukraine. The question of whether or not Ukraine should join the bloc, and how Russia would react has been a contentious issue for years. 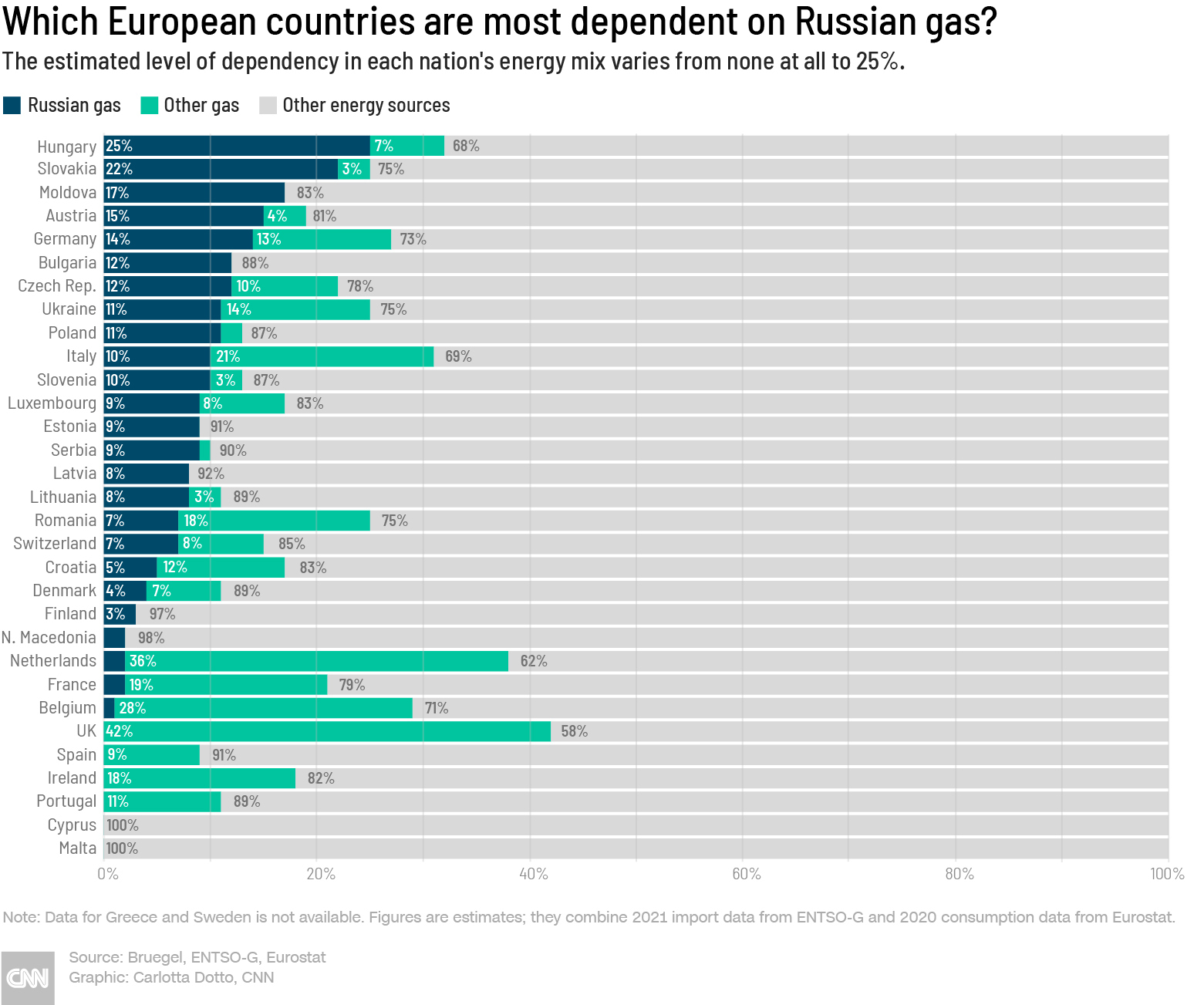 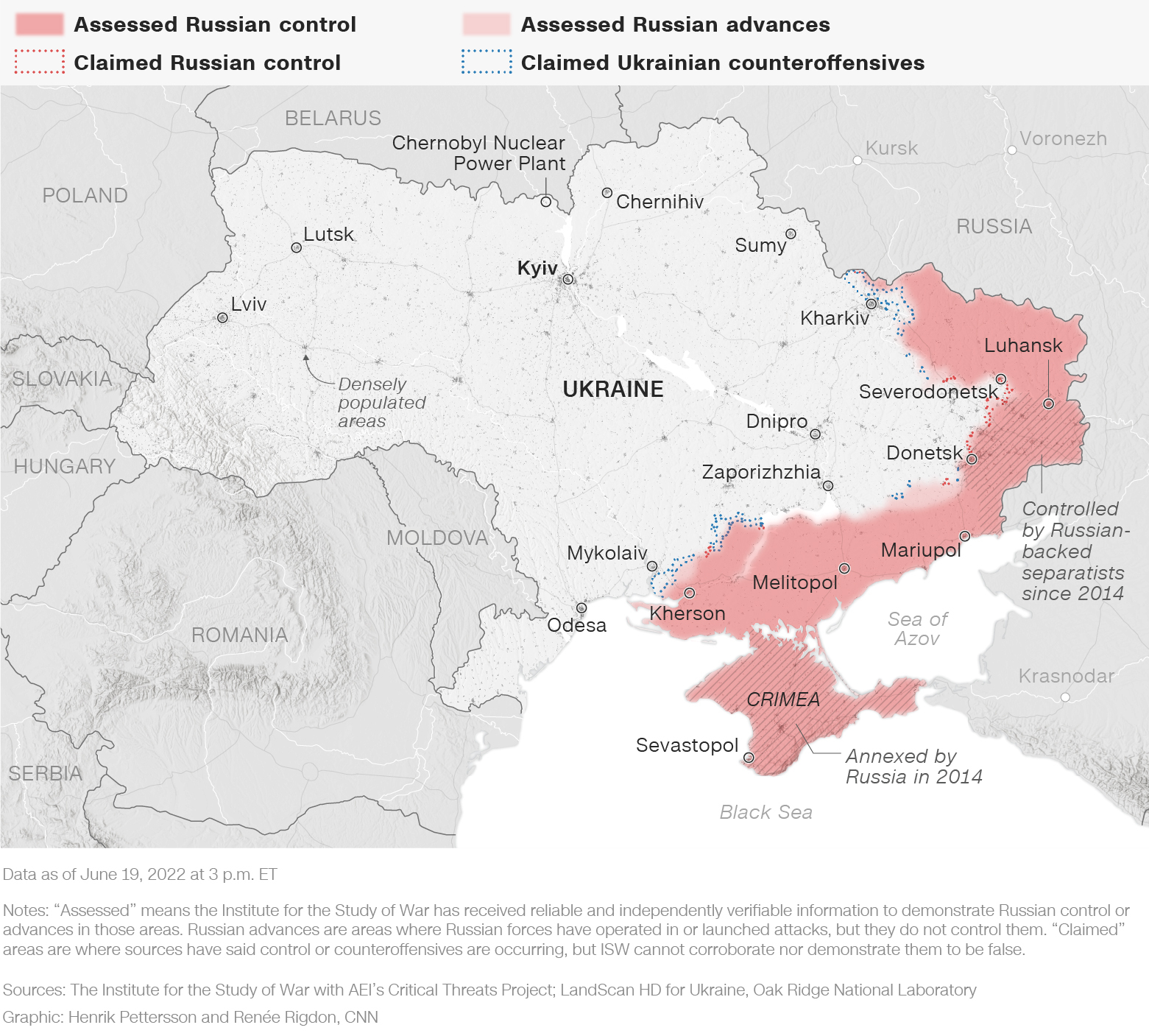