Ukrainian forces moving back from Severodonetsk are “putting themselves in a position where they can better defend themselves,” according to a senior US defense official.

“The Ukrainian armed forces are performing a professional, tactical retrograde in order to consolidate their forces in positions that they can better defend themselves,” said the official in a background call with reporters.

The official also said Russian forces are still “just eking out inch by inch of territory” in Donbas and characterized the Russian move on Severodonetsk as a “very small, very incremental gain.”

However, the official said they did not want to minimize the “significant” percentage of territory Russia does control in Ukraine or the loss of Ukrainian lives.

Several settlements south and southeast of the city of Lysychansk are currently under increased fire by Russian forces, Ukrainian Ministry of Defense spokesperson Oleksandr Motuzianyk said at a briefing Friday.

“The hottest sectors of the front are the settlements in the southern and southeastern directions from Severodonetsk. The enemy has significantly increased the number of air strikes,” Motuzianyk told journalists. “As a result of the strikes on Lysychansk, a large number of buildings were destroyed in the surrounding settlements.”

The remarks highlight the ground Russian forces have gained in the past few days, with all the settlements in close distance to the strategic axis of Lysychansk-Severodonetsk.

“[Russia] is trying to establish full control over Severodonetsk, conducts offensive operations to try to surround our troops in the area of ​​Lysychansk and to block the main logistics routes,” Motuzianyk said. “Heavy fighting continues; the enemy is trying to entrench in the areas of Loskutivka and Rai-Oleksandrivka.”

Motuzianyk also said Ukrainian forces had been able to repel a Russian offensive in Borivske.

Ukrainian forces will have to withdraw from Severodonetsk, the head of the Luhansk regional military administration said earlier.

The first batch of four High Mobility Artillery Rocket Systems that the US pledged to Ukraine are now in the country, and the newly announced batch of four HIMARS will be delivered by “mid-July,” according to a senior US defense official.

Another platoon of Ukrainians is in training to operate the systems, the official told reporters on a background call.

The ministers reiterated their condemnation of the war and called on Moscow "to cease its attacks and threatening actions and un-block the Ukrainian Black Sea ports for food exports."

"In today’s meeting the G7 Foreign Ministers of Canada, France, Germany, Italy, Japan, the United Kingdom, and the United States of America, and the High Representative of the European Union, reaffirmed in the strongest terms their condemnation of Russia’s continued war of aggression against Ukraine," according to the joint statement.

The ministers said that in addition to Russia's blockade of ports, troops are bombing grain silos and damaging Ukraine's agricultural infrastructure.

"Ministers rejected Russia’s false narrative and disinformation on sanctions. All G7 sanctions include exemptions to allow Russian food and agricultural products to get to global markets," according to the statement.

The foreign ministers pledged to support Ukraine with military and defense assistance "for as long as necessary."

German Foreign Minister Annalena Baerbock said Friday international partners are working together in the fight against the looming food crisis caused by Russia's war in Ukraine.

''We are working together against Russia's cynical grain war that threatens to destabilize countries,'' Baerbock told reporters at a joint news conference with US Secretary of State Antony Blinken, adding, ''This difficult time is also a time of almost unprecedented closeness and unity.''

''We will not allow this war to starve the world,'' Baerbock said, adding, ''There is insecurity in the world regarding delivery, especially of grains, and payment.''

Baerbock said the top priority of Friday's food security conference hosted by Germany is to set up reliable transport routes, including the opening of transport via sea and rail, to allow grain from Ukraine to be exported.

The German foreign minister also said with the initiative of the US, temporary silos will be built in Ukraine to store and export grain to avert a global food crisis.

After months of grueling fighting, Ukrainian forces are withdrawing from the city of Severodonetsk, a key strategic stronghold in the Donbas region of eastern Ukraine. A regional Ukrainian military chief accused Russia of destroying most of the city's infrastructure during an intense shelling campaign. 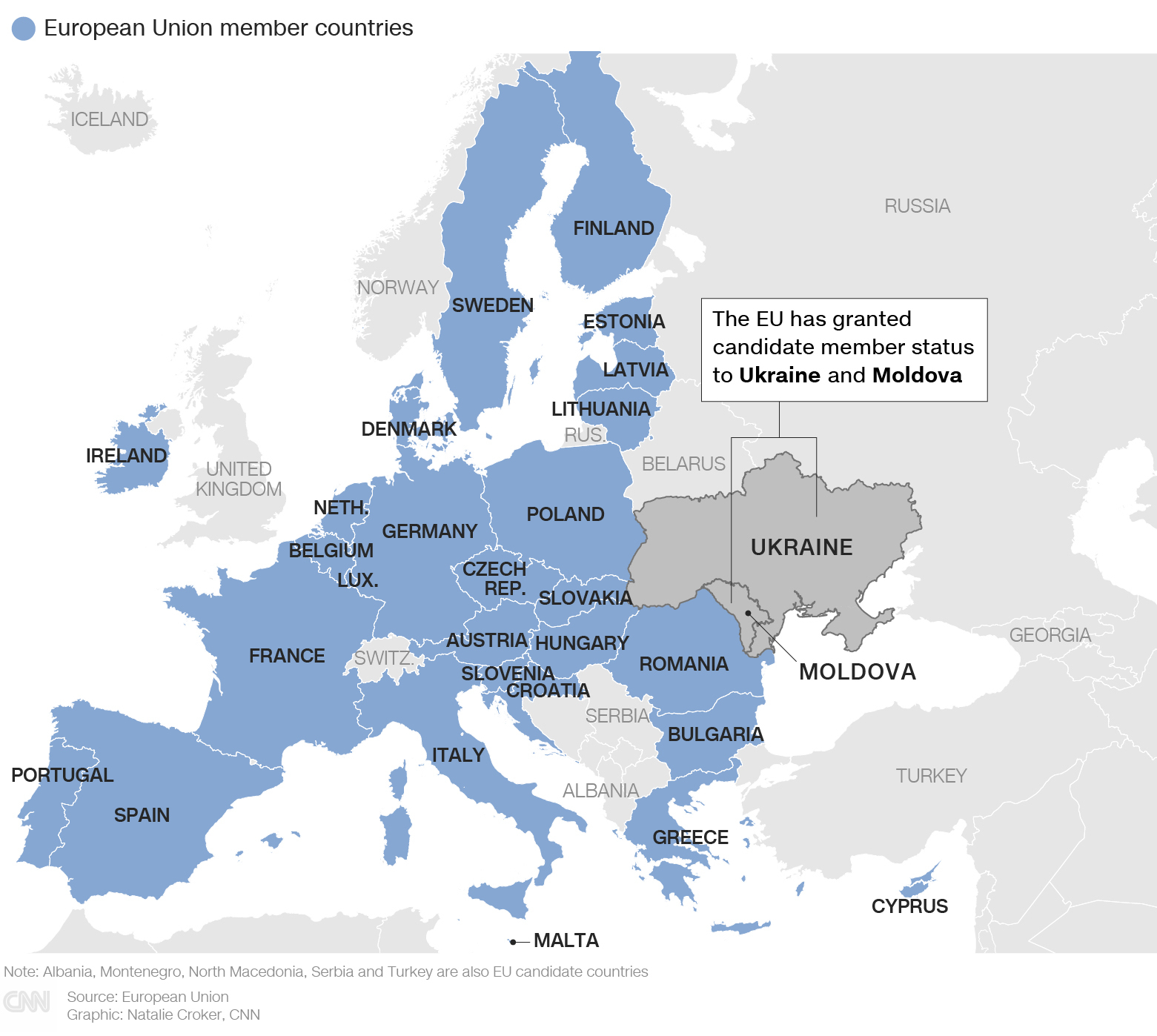 As he marked four months since Russia began its invasion, Ukrainian President Volodymyr Zelensky says his nation “became a country in army boots.”

“Everything changed for Ukraine four months ago. We became a country in army boots. A country in tanks, aircraft, ships. A country in trenches and shelters,” Zelensky wrote on his official Telegram channel on Friday.

“Our way of life changed, but not our worldview. The path on which we are going to the goal changed, but the goal remained the same,” he continued

Russia began its invasion of Ukraine four months ago on Feb. 24.

Russian Foreign Minister Sergey Lavrov claimed Friday that the EU and NATO are gathering a "coalition" to "essentially" prepare for a war with Russia.

Commenting on Ukraine and Moldova joining the EU, Lavrov said the EU is not a military-political bloc, therefore, unlike NATO, the development of its relations with other countries does not create any threats or risks for Russia.

However, Russia perceives the rhetoric of the union had been increasingly aggressive and “Russophobic,” Lavrov said at a joint press conference with his Azeri counterpart Jeyhun Bayramov in Baku.

The European Union, together with NATO, is gathering a sort of modern coalition to fight, essentially, a war with the Russian Federation,” Lavrov said, adding Russia will “monitor this very closely.”

The European Council granted Ukraine and Moldova EU candidacy status on Thursday in a bid to show support for the two countries in the face of Russian aggression against Ukraine.

The question of Ukraine and Moldova joining the EU was labelled "internal European affairs" by Kremlin spokesman Dmitry Peskov, also on Friday. However, he added that it is crucial that a decision on the matter does not further affect Russia’s relations with the two countries or the European bloc.

“These are, of course, internal European affairs,” Peskov told reporters on a regular conference call.

He added, however: “It is crucial for us that all these processes do not bring more problems to us and to the relations of the above-mentioned countries with us. And that it doesn’t lead to a further deterioration of our relations with the EU.”

Peskov's comments echo the words of Russian President Vladimir Putin who said last Friday that Russia “has nothing against” Ukraine entering the EU as it is the “sovereign decision of any country” to join an economic bloc.

Ukrainian forces have begun to withdrawn from Severodonetsk, but several units still remain in the Donbas city, as the operation is expected to last a few days, head of the Severodonetsk district military administration, Roman Vlasenko, told CNN.

“As of now, the Ukrainian military still remains in Severodonetsk,” Vlasenko said on Friday. “They are being withdrawn from the city at the moment. It started yesterday.”

There are a lot of units there, so I think the withdrawal will take a few days,” he added, without specifying where they were withdrawing to.

Vlasenko went on to say that 568 civilians were also in the city, inside the Azot plant.

They will be able to get out as soon as the shelling is over, but to the occupied territory,” he added.

Some background: Amid intense urban combat, hundreds of civilians, including dozens of children, took shelter in the Azot chemical plant in Severodonetsk. Unlike the Azovstal plant in Mariupol, it offers little protection below ground.

As with Azovstal, the Azot plant and its immediate surroundings became the focal point of Ukrainian resistance, frustrating Russian commanders.