NATO will enhance its battle groups in the eastern part of the alliance up to brigade levels, NATO Secretary-General Jens Stoltenberg announced Monday.

"We will increase the number of high readiness forces to well over 300,000," he said at a news conference in Brussels.

The NATO Response Force comprises around 40,000 troops, according to the NATO website.

"These troops will exercise together with home defense forces. And they will become familiar with local terrain, facilities, and our new pre-positioned stocks so that they can respond smoothly and swiftly to any emergency," Stoltenberg went on to say, stressing that "this constitutes the biggest overhaul of our collective deterrence and defense since the Cold War."

These comments come ahead of the NATO summit that will be held in Madrid this week.

The summit will be "transformative," with many important decisions, including on a new "strategic concept for a new security reality," Stoltenberg said Monday, adding that this will include a discussion on China "for the first time."

"Our new concept will guide us in an era of strategic competition. I expect it will make clear that allies consider Russia as the most significant and direct threat to our security," Stoltenberg said. "It will address China for the first time. And the challenges that Beijing poses to our security, interests, and values."

US President Joe Biden and his Chinese counterpart Xi Jinping will likely speak in the coming weeks, the White House said. While there is no timeframe, the conversation will not happen immediately after the G7 meet, where China was a primary topic of discussion, US national security adviser Jake Sullivan told reporters in Germany.

The Kremlin has rejected claims of a Russian default, commenting on reports of Moscow reneging on its foreign debt due to missed payments on two foreign-currency bonds.

"Allegations of default are incorrect because the necessary currency payment was made as early as back in May," Kremlin spokesman Dmitry Peskov said Monday.

Russian reserves have been frozen unduly and the fact that the money was not delivered to the recipients "is not our problem," Peskov added, referring to funds frozen by Euroclear, a Belgium-based financial services company specializing in the settlement of securities transaction.

"So there are no grounds to call it a default," Peskov said.

Attempts to use the frozen reserves in any way would be "illegal" and regarded by Russia as an "outright theft," he added.

Some background: Since Russia invaded Ukraine in February, international banks have warned the country is barreling toward a default on its foreign debt payments, threatening to plunge its economy deeper into crisis.

Defaults are murky territory in global economics, and Russia's situation is complicated by its growing isolation under the unprecedented sanctions imposed on it by Western powers.

But the ruble has rebounded and it now worth more than before the invasion. Even McDonald's has reopened in Russia, under new branding and ownership.

However, earlier this month US Treasury Department officials told CNN they are confident that sanctions are working and that, beneath the surface, a much more dire story is unfolding within Russia's economy, where they contend real and lasting damage is being inflicted.

Discussions among G7 leaders on creating a cap on price of Russian oil are “headed in the right direction,” US National security adviser Jake Sullivan said Monday.

Leaders of the G7 are currently negotiating on capping the price of Russian oil, the latest step toward punishing Moscow while attempting to mitigate the economic effects of the war in Ukraine.

How, when and by how much the price of Russian oil will be capped remains to be seen. Officials said the precise mechanism for accomplishing the cap is still being worked out at the summit.

Sullivan stressed that while there was not a deal yet, the countries are “arriving at a point we believe where there is convergence around really trying to pursue this.”

While he declined to provide a timeframe for this agreement, he said it could be done “relatively quickly.”

In an earlier briefing on the matter, a senior administration official said the goal of the cap would be to “starve Russia” and Putin of his main source of cash and “force down the price of Russian oil to help blunt the impact of Putin’s war at the pump.”

As oil prices have skyrocketed, Russia's oil revenues are actually up, despite global import bans. Leaders want to use their collective leverage to cut the revenue Russia receives from the countries still purchasing its oil.

US President Joe Biden and his Chinese counterpart Xi Jinping will likely speak in the coming weeks, the White House says.

"We do expect that the President and President Xi will have the opportunity to engage over the course of the next few weeks. I can't put a particular timeframe on it. It's not going to be immediately after the G7," US national security adviser Jake Sullivan told reporters in Germany.

He said China had been a primary topic of discussion at this week's summit.

He said that "there is increasing convergence at the G7 and NATO around the challenge poses" but that "competition does not mean confrontation."

"We're not looking to divide the world into rival blocks and make every country choose" he said. "We want to stand for a set of principles that are fair to everybody. And we want to ensure that we're working with like-minded partners to hold China accountable to adhere to those rules."

Ukrainian President Volodymyr Zelensky was focused on regaining momentum in Ukraine over the coming months — and not years — when he spoke to leaders of the G7 on Monday, according to a senior adviser to US President Joe Biden.

"Zelensky was very much focused on trying to ensure that Ukraine is in as advantageous a position on the battlefield as possible in the next months as opposed to the next years, because he believes that a grinding conflict is not in the interest of the Ukrainian people," US national security adviser Jake Sullivan said after the meeting.

Earlier, a source familiar with the matter told CNN that Zelensky told leaders he wanted the war to be over the end of the year, before winter sets in.

Sullivan declined to characterize Zelensky's message. But he said the Ukrainian president was clear that he wants support in the near-and-medium term, not in the distant future.

"He would like to see his military, and those in the West who are supporting his military, make maximum use of the next few months to put the Ukrainians in as good a position as they can possibly be in with respect to the situation on the ground in both the east and the south," Sullivan said.

"That's consistent with the American approach of trying to flow in the necessary material and equipment to put the Ukrainians in an advantageous position on the battlefield. But that's really what he was focused on," he said.

Zelensky's timeframe was based on battlefield considerations but also the plight of his people, he said.

"I think another really important consideration is just the sense of suffering of the Ukrainian people with each day and week that this goes on," Sullivan said. "And so, he's got an urgency to try to show his people that Ukraine is first of all, holding fast against the Russian onslaught, and secondly, making some progress in areas where they feel that they can, in fact push back against the Russians."

The UK Ministry of Defence (MoD) has projected that Russia will increasingly use its reserve units in its bombardment of eastern Ukraine.

Russia will "highly likely increasingly rely on echelons of reserve forces" in upcoming weeks, the ministry said in its latest assessment of the conflict.

"Despite a continued shortfall in the number of deployable reservists for Ukraine, the Russian leadership likely remains reluctant to order a general mobilisation," the ministry said. It added that Russia’s main operational focus remains the eastern Severodonetsk-Lysychansk pocket.

The ministry added that "consistently heavy shelling suggests Russia is now trying to regain momentum on the northern Izium axis."

Some background: On Saturday, Severodonetsk's head of military administration said the city had fallen under "Russian occupation" following the months of grueling bombardment. Neighboring Lysychansk is the last city in the Luhansk region to remain in Ukraine's control, but Russian forces are gaining ground, and civilians have been urged to evacuate.

European and US officials do not expect Turkey’s concerns about Finland and Sweden joining NATO to be assuaged before the NATO summit this week, US and European officials told CNN.

Yet some officials believe that Turkey may be eyeing the NATO summit as a place to finally make agreements that could propel the process forward.

"My best projection based on what I've seen is that they will run this to the wire at Madrid. They also always prefer if they're going to make concessions to do it at the leader level, they believe that enhances that status," said one European official when discussing the matter. "It is Turkey’s standard operating procedure not to give concessions till the last possible moment. And that last possible moment is usually defined as a bilateral with the US president followed by a leaders meeting."

But Turkish officials have said that they do not see any "limited timetable" to the talks, and some US and European officials are less convinced that Turkey is ready to strike an agreement in Spain.

White House officials have been circumspect about whether Biden and Erdogan will meet in Spain. But one person familiar with the matter said they expected the men to speak at some point about the accession process, though it may not be elevated into a formal bilateral meeting.

US officials have been wary about inserting Biden directly into the discussions, aware that having the US directly involved could raise the stakes and escalate Erdogan’s demand — including the likely extradition request for a US-based cleric Erdogan accuses of orchestrating a 2016 coup attempt.

Still, US officials are confident the two countries' applications will eventually be successful.

The Ukrainian military says it has hit a second missile system on Snake Island, as well as several Russian personnel in a “continued operation” to liberate the Black Sea island.

“Overnight there were over 10 targeted hits on the island. We are still investigating the results, but we are getting reports that one more ‘Pantsir S1’ missile system was hit,” said Natalia Humenyuk, a Ukrainian South Defense spokesperson.

A radar station that Humenyuk described as Russia’s “eyes and ears” on the island had been hit last week, she added.

Snake Island was the scene of one of the opening salvos of the war in Ukraine and is of strategic importance to both sides. During the opening days of the war, it was the site of a demand from a Russian war ship to Ukrainian defenders to surrender. They replied, infamously, with "Russian warship, go f**k yourself” – a phrase that become a motif of Ukrainian resistance. 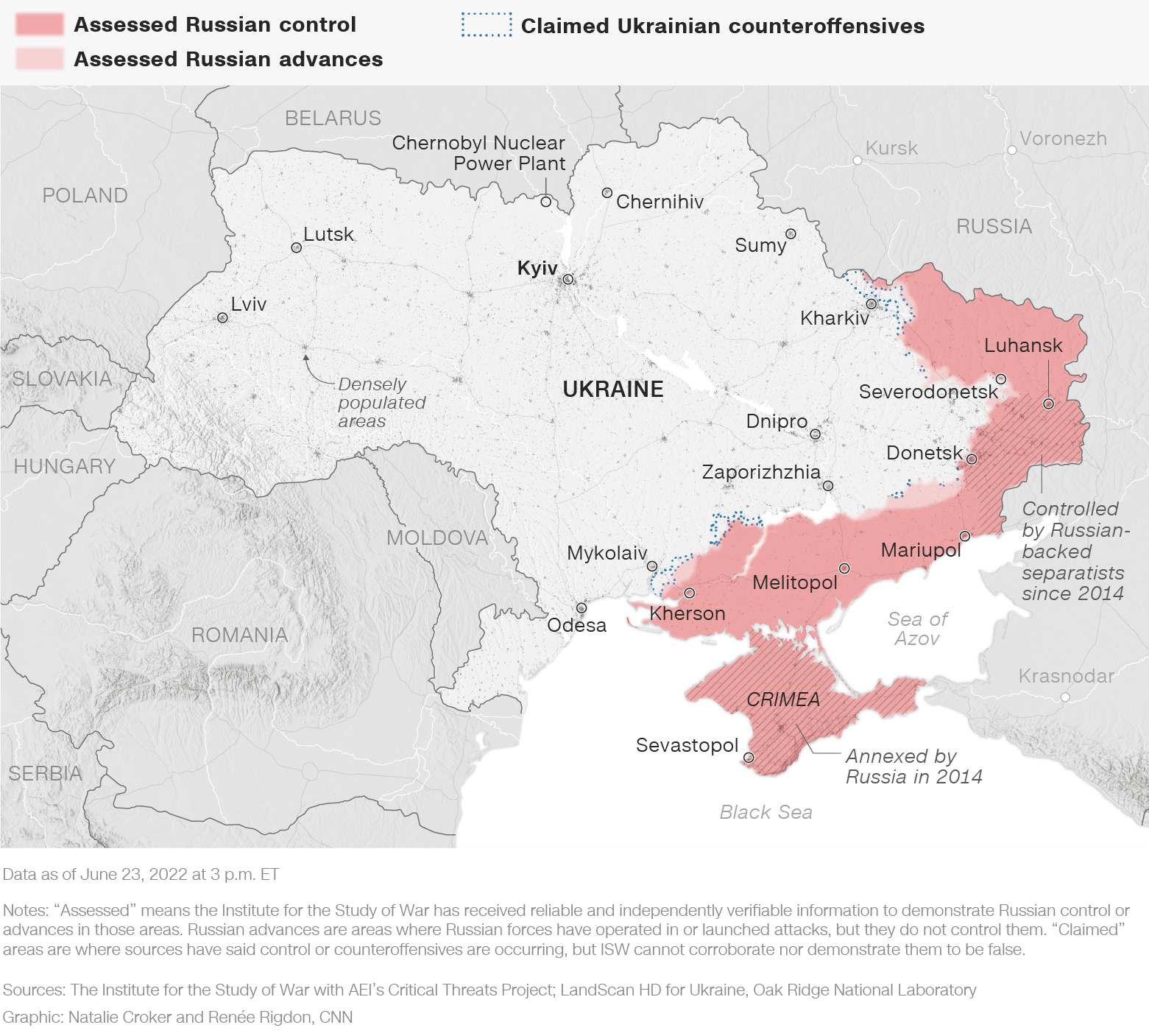 After a series of explosions in the city of Sloviansk overnight, local officials are urging civilians to leave the city.

Vadym Liakh, head of Sloviansk civil military administration, said there had been "night arrivals" in the center of the city, and further attacks on Monday morning.

"There are no military facilities here. Russia is at war with the civilian population. And this is a war of annihilation. Don't wait for it to arrive at your home. Get out," Liakh said in a short video message on Facebook.

"There are wounded and killed. Please don’t forget about evacuation," Liakh said.

Russian forces are within about 15 kilometers (9 miles) of Sloviansk, to the north and north-east.

Some context: Sloviansk is one of the larger conurbations in the eastern separatist Donetsk region still in Ukrainian hands. Civilians remaining in Lysychansk are also being urged to evacuate, while those still in the recently fallen Severodonetsk can only evacuate to Russia or Russian-occupied territories in Ukraine, a local official has said.