The pro-Russian captors of two Americans captured during a battle near Kharkiv, Ukraine, earlier this month are reportedly "willing to negotiate," one captive’s mother told CNN on Tuesday.

Bunny Drueke said her son, Alexander John-Robert Drueke, spoke in recent days – under duress – with an official from the U.S. State Department.

"What they said, they said, was that he was being held by the Donetsk People’s Republic, and that they were willing to make a deal for release," Drueke told CNN, characterizing what was relayed to her by the State Department.

Drueke said her State Department contact told her it was clear during the phone call her son was being told what to say. She was informed of the call on Saturday, but it is unclear when it took place.

A senior State Department official told CNN they could not speak to specifics given privacy considerations, "but we have a core mission to provide support to Americans in need, and we take that obligation seriously at all times and in all circumstances."

The so-called Donetsk People’s Republic (DPR) is a Russian-backed, self-declared republic which has governed a breakaway portion of Ukraine’s Donetsk region since 2014.

She said it was unclear what his captors were asking for in any negotiation with the U.S. Government: If they asked for something, "the State Department didn’t share it with me," she said.

"He said he had food and water, he was being treated well, and he sounded good," she said. She added he was being held separately from his fellow captive, Andy Tai Ngoc Huynh, but he had seen him a few days previously, and "he looked OK."

In the interview, a man can be heard behind the camera revealing the location of their interview when he says "here in Donetsk" during a question to Drueke.

Drueke was also asked in the interview if he had any objections to how he has been treated since his capture, and he revealed he has been beaten a few times.

Bulgaria said Tuesday it had asked Russia to withdraw 70 staff members from its embassy in Sofia by July 3, saying Russia should decrease the size of its embassy to match the Bulgarian diplomatic footprint in Moscow.

The ministry said its request was based on "reciprocity" and activities that are "a threat to national security," and incompatible with the Vienna Convention on diplomatic relations.

Ukraine called for the meeting in response to a Russian missile attack on a shopping mall filled with civilians, and the recent Russian shelling across Ukraine, the diplomats said.

President Joe Biden announced Tuesday the United States will send two new destroyers to the Rota Naval Station in Spain. This brings the total number of US destroyers based there to six.

"As I said before the war started, if Putin attacked Ukraine, the United States would enhance our force posture in Europe and respond to the reality of a new European security environment," he said alongside Spanish Prime Minister Pedro Sánchez. "Together, the new commitments will constitute an impressive display of allied unity and resolve and NATO's 360 degree approach to our security."

The move comes as the US is expected to make specific announcements during this week's NATO summit in Madrid to ramp up the American force posture as it looks to counter a "more acute and aggravated Russian threat," according to national security adviser Jake Sullivan.

"The United States will be making specific announcements tomorrow on land, sea and air on additional force posture commitments over the long term beyond the duration of this crisis, for however long it goes on," Sullivan said aboard Air Force One as Biden was flying to Madrid. "Those will help increases the United States’ and NATO’s maritime presence."

"By the end of the summit what you will see is a more robust, more effective, more combat credible, more capable and more determined force posture to take account of a more acute and aggravated Russian threat," he added.

He said the whole of the NATO alliance was also planning to agree on specific targets for increased funding for NATO from their national budgets.

This follows after NATO secretary-general Jens Stoltenberg announced Monday the US-led military alliance will enhance its battle groups in the eastern part of the alliance up to brigade levels, saying it would be the "biggest overhaul of our collective deterrence and defense since the Cold War."

"We will increase the number of high readiness forces to well over 300,000," he said, adding it will include "more pre-positioned equipment, and stockpiles of military supplies; more forward-deployed capabilities, like air defense; strengthened command and control; and upgraded defense plans, with forces pre-assigned to defend specific allies."

According to the NATO website, the NATO Response Force comprises around 40,000 troops.

"These troops will exercise together with home defense forces. And they will become familiar with local terrain, facilities, and our new pre-positioned stocks so that they can respond smoothly and swiftly to any emergency," Stoltenberg added.

With previous reporting from CNN's Sharon Braithwaite in London

The US Department of Defense's watchdog announced it would begin an evaluation of the extent to which the DoD carried out intelligence sharing with European partners in support of Ukraine.

The goal of the evaluation is to look at how the DoD “developed, planned, and executed cross-domain intelligence sharing” with European partners, the DoD Inspector General wrote in a memo announcing the project.

The announcement comes one week after the Inspector General launched an evaluation of the DoD’s plans to restock its own stocks of weapons and equipment as it maintains an ongoing transfer of supplies to Ukraine.

The Inspector General also has a number of other projects already underway related to Ukraine, including an evaluation of plans to provide and account for security assistance and intelligence to Ukraine, examining the DoD process for tracking the use of funds to support Ukraine, and more.

Additional footage of strikes on Kremenchuk, which were geolocated by CNN, showed one of the two missiles that hit the city on Monday landed on the edge of a city park, close to a road machines factory.

The park is about 500 meters (about 1,640 feet) away from the mall where a missile strike killed at least 18 people.

"Aerospace Forces launched a strike with high-precision air-based weapons on hangars with weapons and ammunition received from the United States and European countries," the ministry said. "As a result of a high-precision strike, Western-made weapons and ammunition, concentrated in the storage area for further shipment to the Ukrainian group of troops in Donbas, were hit."

Ukrainian authorities have denied the plant was housing military equipment.

"The plant provided services for asphalt laying, road repair and manufactured special equipment for this purpose," the head of the Kremenchuk district military administration, Oleh Liednik, told CNN Tuesday. "The factory was built in 1984 and since then, there has been no manufacture or repair of military equipment; there was no technological cycle for this."

On Monday, Ukrainian President Volodymyr Zelensky said the missile strike on the Kremenchuk mall had been deliberate, and rejected the notion it had been an accident.

“This is not a mistaken hit of missiles,” Zelensky said. “This is a planned Russian strike at this shopping center.” 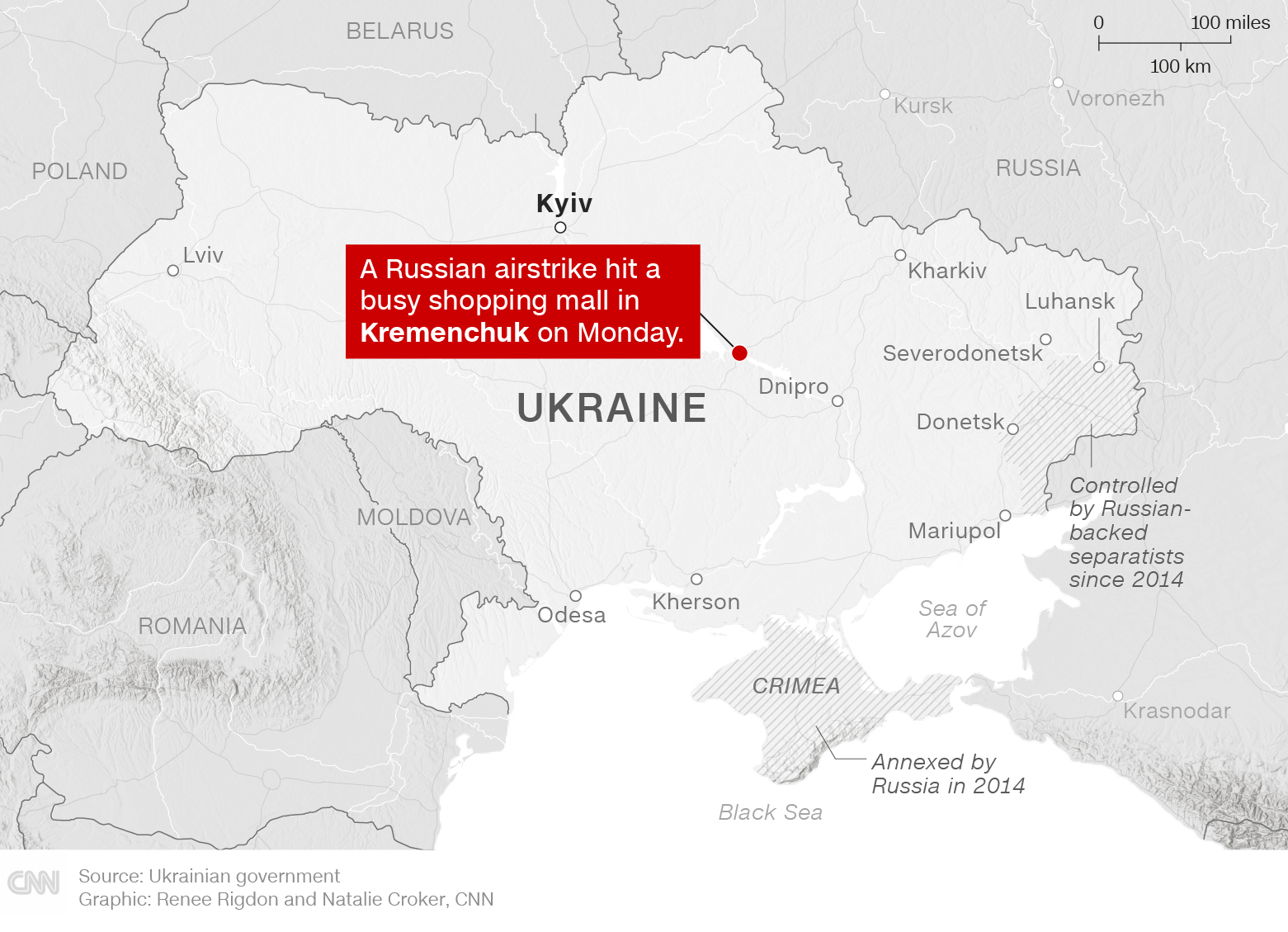 The United States government took a slew of actions against Russia Tuesday, sanctioning those who it says support Russia's defense industrial base, designating Russian military units for human rights abuses in Ukraine, and implementing a ban on the import of Russian gold.

The moves are the latest in response to Russia's monthslong war in Ukraine and were taken after G7 leaders in Germany agreed to steps, including the gold import ban, meant to weaken Moscow.

In a statement, the US Treasury Department announced sanctions on 70 entities, including State Corporation Rostec — "a massive Russian state-owned enterprise formed to consolidate Russia’s technological, aerospace, and military-industrial expertise" — and its key holdings and affiliates, as well as 29 Russian individuals.

According to the Treasury's statement, the US State Department is imposing sanctions on 45 entities and 29 individuals.

"Included in the State Department’s action is the designation of Russian Federation military units and the redesignation of Russia’s Federal Security Service (FSB), which have been credibly implicated in human rights abuses or violations of international humanitarian law in Ukraine," the Treasury statement said.

The State Department will also move "to impose visa restrictions on officials believed to have threatened or violated Ukraine’s sovereignty, territorial integrity, or political independence, including on more than 500 Russian Federation military officers and on Russian Federation officials involved in suppressing dissent," it said.

The war in Ukraine shows the "danger" of being too dependent on commodities from authoritarian regimes, NATO Secretary-General Jens Stoltenberg warned on Tuesday, during a press briefing in Madrid.

"The way Russia is using energy as a weapon of coercion highlights the need to quickly wean off of Russian oil and gas," Stoltenberg said.

The NATO chief warned "we must not swap one dependency for another."

"Lots of new green technologies come from China," he said, stressing the need to "diversify our energy sources and our suppliers."

Remember: Stoltenberg's comments come even as the US and some European countries weigh other options for sourcing oil and gas, which include authoritarian regimes like Venezuela and Iran.

The NATO chief also said sanctions against Russia are a price worth paying for freedom.

"Of course, I recognize that our economic sanctions, for instance on parts of [the] Russian industry, on the financial sector, also have global ramifications, also for the energy markets, and therefore, Europeans, NATO allies, the United States ... They pay a price. There's no way to deny that," he said, adding that the price is much lower than the price the countries would pay if "Putin gets his way by using military force against an independent nation."

"It is the price we have to pay for freedom," he added.

“Our support for Ukraine and our sanctions against Russia will be maintained as long as needed and with the intensity needed in the upcoming weeks and months,” Macron told a news conference at the G7 summit in Bavaria.

When asked about Ukrainian President Volodymyr Zelensky’s call to end the war in Ukraine before the year is out, Macron responded, "No one is considering an end of the war in the next weeks or months."

He expressed hope an “exit could be obtained at the end of the year," but "only with the certainty that Russia cannot and should not win.”

The French leader refused to use language previously used by Zelensky, describing Russia as a “state sponsoring terrorism.”