Finland Foreign Minister Pekka Haavisto told CNN that "of course" war in Europe beyond Ukraine is a possibility.

"Of course it's a possibility. And that's why it's so important to support Ukraine at the moment," Haavisto told CNN's Jim Sciutto.

Following decades of neutrality, Finland — along with Sweden — was formally invited to join NATO this week during the alliance's summit in Madrid, marking a historic expansion of the defense bloc that directly undercuts Russian President Vladimir Putin's aims as his war in Ukraine grinds ahead.

The group collectively decided to approve countries' applications to join after Turkey dropped its objections Tuesday, paving the way for NATO's most consequential enlargement in decades. The decision will now go to the 30 member states' parliaments and legislatures for final ratification. NATO's leaders said they expected the process to move quickly, allowing for an unprecedentedly swift accession and a show of unity against Putin.

When asked if Ukraine can win the war, Haavisto said, "They can maintain the situation and in that sense, they can win this battle. I think they are of course morally on the high ground. They are very united."

"They need our support," he added.

The prosecutor in the trial of WNBA player Brittney Griner announced the charges against her during a hearing Friday in a court near Moscow, Russian state news agency TASS reported.

At the Khimki City Court, Griner was accused by a prosecutor of smuggling less than a gram of cannabis oil in her luggage. The prosecution believes that then Griner had the intention to import the drugs into Russia's territory and put the prohibited substances into a backpack and a suitcase, according to TASS.

The Phoenix Mercury star plays in Russia during the WNBA’s off-season and was arrested at a Moscow airport a week before Russia invaded Ukraine earlier this year.

When Griner arrived on a flight from New York to Moscow's Sheremetyevo airport on Feb. 17, "two cartridges of hashish oil were found in her hand luggage during an inspection," according to TASS.

Cannabis oil is subject to control on the territory of the Russian Federation and is classified as narcotic drugs, according to TASS.

The offense of smuggling significant amounts of a narcotic substance is punishable by up to 10 years in prison in Russia.

US Embassy Charge d’Affaires Elizabeth Rood said she was able to speak with Griner inside the courtroom and that the US government is working "very hard" to bring Griner and other "wrongfully detained citizens" safely home.

"She is doing as well as can be expected in these difficult circumstances and she asked me to convey that she is in good spirits and is keeping up the faith," Rood added.

Griner’s lawyers, Alexander Boykov and Maria Blagovolina, said they were unaware of any plans to exchange Griner for a Russian prisoner held in the US in an impromptu presser at the end of the first day of her trial.

The court will continue to hear the case next week on July 7 at 2:30 p.m. local time.

Later on Friday, US Secretary of State Antony Blinken said that officials from the US embassy in Russia "attended Brittney Griner’s trial today in Moscow."

"We won’t stop working until they are reunited with their loved ones," Blinken said.

What Griner's wife says: Cherelle Griner, the wife of WNBA star Brittney Griner, told CNN on Thursday she wants US officials to do whatever they have to do to bring the basketball legend home – and she needs to see them do more.

“It’s really, really difficult. This is not a situation where the rhetoric is matching the action,” she said. “I do have to unfortunately push people to make sure that the things they’re telling me is also matching their actions, and so it’s been the hardest thing to balance because I can’t let up. It’s over 130 days and BG’s still not back.”

She also said she would “absolutely” like to meet with US President Joe Biden and humanize Brittney to him so he can “see BG as we see BG.”

“While everyone wants to tell me they care, I’d love for him to tell me he cares,” she added.

Read more from her interview here.

The death toll from Russia's overnight strikes in the Odesa region has risen to 20, Ukraine's emergency services have said.

A third strike landed in a field, authorities said. A rescue operation is ongoing and 38 people were injured in the strikes.

“We don't expect to find anyone alive, but there is a chance,” first deputy interior minister Yevhenii Yenin said earlier on Friday, speaking from the scene of the attacks. 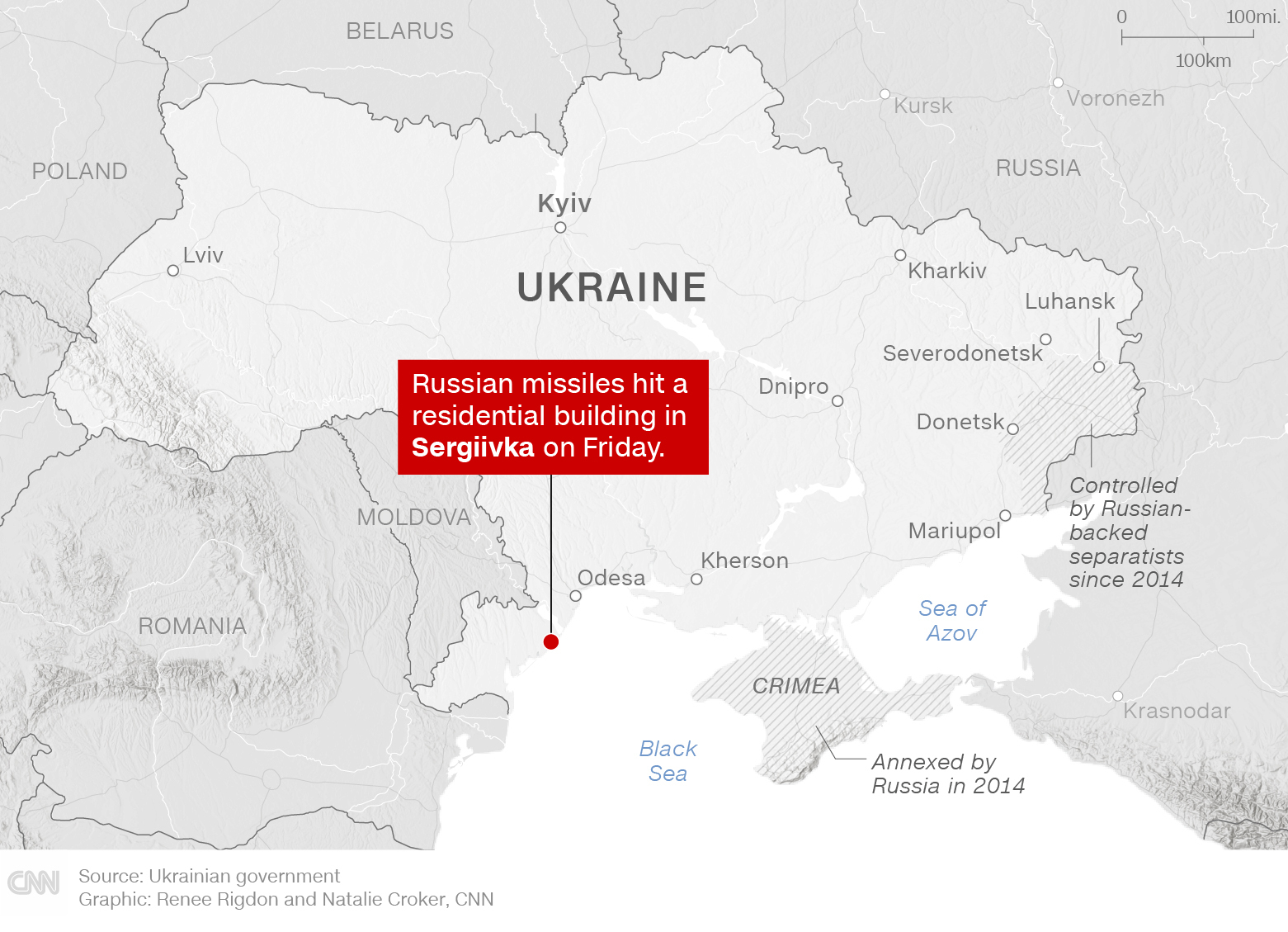 Following Russia's withdrawal from Snake Island in the Black Sea, Ukraine hopes that strikes on the territory around Odesa will decrease, a spokesman for the State Border Guard Service of Ukraine, Andrii Demchenko, said Friday.

“It’s now known why the enemy took the island. They filled the territory with the means of destruction and fired from them,” Demchenko said at a briefing. “We hope now shelling of the territory of Ukraine will decrease.”

Demchenko went on to say he hoped the Ukrainian border service would be able to return to the island soon.

“The situation with Snake Island remains tense as the enemy could have mined the ways to the island. Now the situation is being monitored and investigated,” he explained. “I hope the Ukrainian border guards will return to this piece of Ukrainian land as soon as possible.”

Russian President Vladimir Putin has claimed Western sanctions are pushing Russia and Belarus toward "speeding up integration" in various sectors, which he said would "minimize the damage" of the sanctions.

"Russia and Belarus continue to grow in their cooperation in the political, trade, economic, cultural and humanitarian spheres," Putin said in a video message to the participants of an annual Russia-Belarus forum on Friday

"The unprecedented pressure of sanctions from the so-called collective West is pushing us towards speeding up integration. Together it is easier to minimize the damage from the illegal sanctions, it is easier to set up the production of demanded products, develop new competencies and expand cooperation with friendly countries," Putin said.

Belarus is a staunch Russian ally and helped facilitate Moscow's invasion of Ukraine in February, with some Russian forces entering the country through the Ukrainian-Belarusian border.

A number of joint programs between the two nations have already been developed and more are on track for the coming years, Putin said. Areas of cooperation include technological and industrial innovation, finances and transport.

Putin said the joint programs were aimed at creating "equal economic conditions for our countries" and would "form a reliable framework for a financial market and transports base."

His message comes just days before Belarus celebrates its independence from Nazi Germany on July 3, and as Russia and Belarus marked 30 years of diplomatic relations earlier this year.

Heavyweight boxing world champion Oleksandr Usyk said he didn't want to leave Ukraine amid the ongoing war but was urged by injured Ukrainian soldiers to "fight for the country" in his rematch against Anthony Joshua.

Usyk returned to Ukraine, took up arms and joined a territorial defense battalion in Kyiv following Russia's invasion of his homeland and spent weeks helping out in the war efforts.

Back in March, the Ukrainian sports minister said Usyk would be granted permission to return to training in the lead-up to his fight with Joshua, but still the 35-year-old was reluctant.

"They were asking me to go, to fight, to fight for the country, fight for your pride and if you're going to go there, you're even going to help more for our country.

"I know a lot of my close people, friends, close friends, are right now in the front line and fighting. What I'm doing right now, I'm just supporting them, and with this fight, I wanted to bring them some kind of joy in between what they do."

US officials say a trio of assassination attempts targeting pro-Russian officials over the past two weeks suggests a burgeoning resistance movement against pro-Russian authorities occupying parts of southern Ukraine.

While it is just a few incidents isolated to the town of Kherson so far, US officials say the resistance could grow into a wider counterinsurgency that would pose a significant challenge to Russia's ability to control newly captured territory across Ukraine.

The Kremlin "faces rising partisan activity in southern Ukraine," Avril Haines, the director of national intelligence, said during a conference in Washington, DC, on Wednesday.

The United States believes that Russia does not have enough forces in Kherson to effectively occupy and control the region, one US official said, especially after pulling forces from the area for the fight to the east in Donbas. Another US official told CNN that move may have provided Ukrainian partisans with a window in which to attack locally installed Russian officials.

The region is critical to Russia's hold on Ukraine's Black Sea coast and controls access to the Crimean peninsula. It's unclear how many Russian forces are in or near Kherson, but an occupation against a hostile local population requires far more soldiers than a peaceful occupation of territory.

Read the story in full.

It's just past midday across Ukraine. Here are the key headlines this Friday.

Ukraine says an additional person has died after Russia's overnight missile attacks in Odesa, bringing the death toll to 19.

Three Russian missiles hit a nine-story building and two recreation centers in the village of Sergiivka, in the southern Odesa region of Ukraine. Two children are among the dead and 38 people were injured, authorities said on Friday.

According to first deputy interior minister Yevhenii Yenin, there were no military targets or infrastructure in the vicinity of the areas struck by the Russian missiles.

Speaking at the scene, Yenin also said search and rescue operations were ongoing.

“We don't expect to find anyone alive, but there is a chance,” Yenin said. “According to preliminary information, there could have been two more people in the premises of the recreation center.”

Kremlin spokesman Dmitry Peskov claimed on Friday that Russian forces "do not target civilian infrastructure" during what Moscow euphemistically calls its "special military operation" in Ukraine.

He said Russia targets areas where ammunition is stored -- but as with previous Russian attacks on residential or community buildings, he failed to provide any evidence that this was the case at the Odesa sites.