At least one person was killed and seven were injured when Russian forces shelled Sloviansk in the Donetsk region, the city’s military administration said Tuesday.

“The central market caught fire. The central district of the city, as well as Varshava, Pivnichny, Slovkurort neighborhoods were also affected,” according to the local authority. “The extent of the damage is being ascertained.”

After Russian and separatist forces secured Lysychansk — effectively taking over nearly all the Luhansk region, barring a few pockets of resistance — they are now setting their sights on the Donetsk cities still under Ukrainian control, namely Sloviansk and Kramatorsk.

A new set of economic measures aimed at supporting the Russian military passed the first vote in the State Duma, Russia's lower house of parliament.

There are still several rounds of parliamentary procedure to go, but if the measures are adopted, legal entities in Russia will not be able to refuse contracts with the Russian Armed forces.

Although Russian officials continue to call the war in Ukraine "a special military operation," the new measures would effectively mean the country is re-shaping its industry in support of the ongoing invasion, placing the country on a war economy footing.

In his statement, Deputy Prime Minister Yuri Borisov noted the "enormous sanction pressure" from the West.

“The bills introduce the obligation of organizations to conclude contracts in order to ensure counter-terrorism and other operations outside the territory of the Russian Federation, and also grant the rights to contractors to purchase products necessary to fulfill the State Defense Order from a single supplier," Borisov said as quoted by Russian state news agency RIA Novosti.

The economic measures will still need to undergo second and third readings at the State Duma, be reviewed by the upper house of parliament and be signed by President Vladimir Putin to become law.

Russia invaded Ukraine on Feb. 24. While it has made gains in the eastern Ukrainian territory, it has also suffered heavy losses in terms of its army and equipment.

“The Prime Minister said the world was behind Ukraine, and he believed President Zelensky’s military could retake territory recently captured by Putin’s forces," she added.

Johnson updated Zelensky on the latest UK military equipment being sent to Ukraine, "including 10 self-propelled artillery systems and loitering munitions, which would be arriving in the coming days and weeks," the spokesperson said.

Ukrainian forces shelled the city of Donetsk in Donbas on Tuesday, the representative from the self-proclaimed Donetsk People’s Republic (DPR) at the Joint Center for Control and Coordination on the ceasefire said, according to Russian state news agency RIA Novosti.

The 155mm caliber is used by NATO countries, including the US, but not by Russia and other former Soviet countries, such as Ukraine, suggesting the shells were fired from equipment supplied by the West.

Ukrainian officials have yet to comment on the alleged strikes but videos posted on social media and geolocated by CNN show smoke billowing from the Kamaz center, in Donetsk, in the same area the strikes were reported by the DPR official.

The videos also show continuous explosions, suggesting ammunition could have been stored in the facility.

Ukrainian President Volodymyr Zelensky has warned that up to 60 million tons of grain could be stuck in Ukraine by the fall if the country continues to face blocked exports.

And NATO has formally begun the process of ratifying membership of Sweden and Finland’s accession to the alliance. Both countries ended their decades of neutrality when they applied to join NATO following Russia’s invasion of Ukraine.

An international conference in Lugano, Switzerland adopted a series of principles that would support Ukraine long-term as it tries to rebuild and recover from the war with Russia.

It came as the two-day Ukraine Recovery Conference, which was attended by leaders from more than 40 countries and international organizations, drew to a close.

The declaration commits to long-term economic and technological assistance "that will prepare Ukraine for the time after the war while the war is still raging," said Ignazio Cassis, president of the Swiss Confederation and head of the Federal Department of Foreign Affairs.

"Here in Lugano we have launched the process of Ukraine's recovery at international level and set out the principles underpinning the recovery," Cassis said. The principles would "link recovery to reform" and focus on transparency, partnership and equality.

"This should give the people of Ukraine hope and certainty that they are not alone, because Ukraine's sustainable recovery requires revival, resilience and renewed institutions fit for the future," he said.

On Monday, Ukrainian Prime Minister Denys Shmyhal said at the conference that Ukraine’s recovery plan will cost an estimated $750 billion and that confiscated Russian assets should be a key source of funding.

WNBA star Brittney Griner, in a handwritten letter to President Joe Biden, said she fears she will be detained in Russia indefinitely and pleaded with the President not to forget about her and other American detainees.

"(As) I sit here in a Russian prison, alone with my thoughts and without the protection of my wife, family, friends, Olympic jersey, or any accomplishments, I'm terrified I might be here forever," she wrote, according to a statement released by the communications company representing the Griner family.

Griner, 31, who has played in Russia during the WNBA's offseason, was arrested February 17 at a Moscow airport, a week before Russia invaded Ukraine. Russian authorities claimed she had cannabis oil in her luggage and accused her of smuggling significant amounts of a narcotic substance, an offense punishable by up to 10 years in prison. She went on trial at a court near Moscow on Friday on drug smuggling charges.

Griner's supporters and US officials say she has been wrongfully detained and have called for her release as fears mount that she is being used as a political pawn amid rising tensions between Russia and the US. 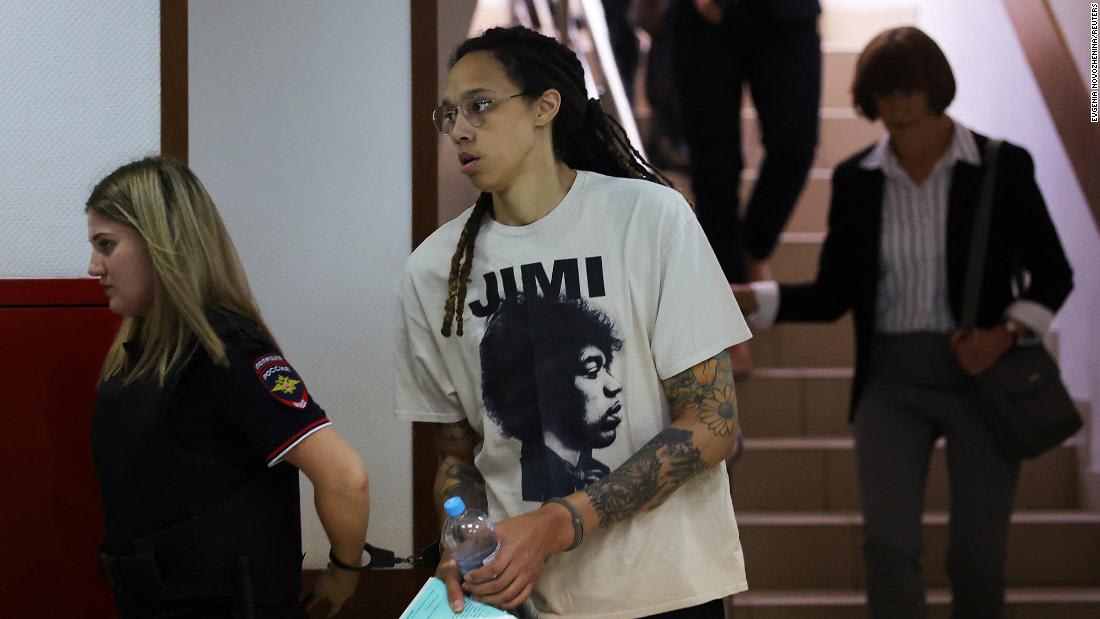 Ukrainian forces have repelled a Russian assault on the village of Bilohorivka, one of the few pockets inside the Luhansk region still controlled by Kyiv, the head of Luhansk region military administration said on Tuesday.

"The main efforts of the [Russians] are focused on establishing control over the territory of the Luhansk region within its administrative borders," Serhiy Hayday said.

Russian President Vladimir Putin seemed to have announced an operational pause for the Russian forces that had taken over most of Luhansk, with him congratulating them on Monday. But Ukrainian reports from the frontline suggest otherwise. According to an update from the General Staff of the Ukraine military, fighting on the administrative borders of the region continues.

In the neighboring region of Donetsk, also in the Donbas, several cities were shelled, including Avdiivka, Marinka and Bakhmut, with residential buildings and civil infrastructure damaged, the Ukrainian military said.

According to the military, at least two people were killed and six were wounded in the last 24 hours.

"There is not a single safe city in Donetsk region where there is no shelling," Kyrylenko added.

Kyrylenko said that "in cities that are relatively far from the front line, cruise missiles are used" while "all types of artillery, tanks, missiles, aerial bombs" target the front line.

In the areas already under Russian control, Ukrainian officials say Moscow’s focus is on establishing a control structure.

"In Severodonetsk, a commandant's office was created, which, according to their plan, should replace the local government, and they are looking for housing and communal services specialists," the Ukrainian military said.

NATO has formally begun the process of Sweden and Finland joining the alliance, its secretary general has said.

NATO members signed the protocols of accession on Tuesday, in what Jens Stoltenberg labeled an "historic moment."

It comes after the NATO summit in Madrid last week where allied leaders agreed to invite Finland and Sweden to join the alliance.

"This is truly an historic moment. For Finland, for Sweden, for NATO and for our shared security," Stoltenberg said.

He said that NATO's door remains open to democracies in European that are "ready and willing to contribute to our shared security."

Some background: Finland and Sweden ended their decades of neutrality when they applied to join NATO following Russia's invasion of Ukraine, which was met by some opposition from Turkish President Recep Tayyip Erdogan, who accused them of housing Kurdish "terrorist organizations."

Last week, Turkey dropped its opposition after a joint memorandum was signed between the three countries, underscoring their commitment to fully support each other against threats to their security.